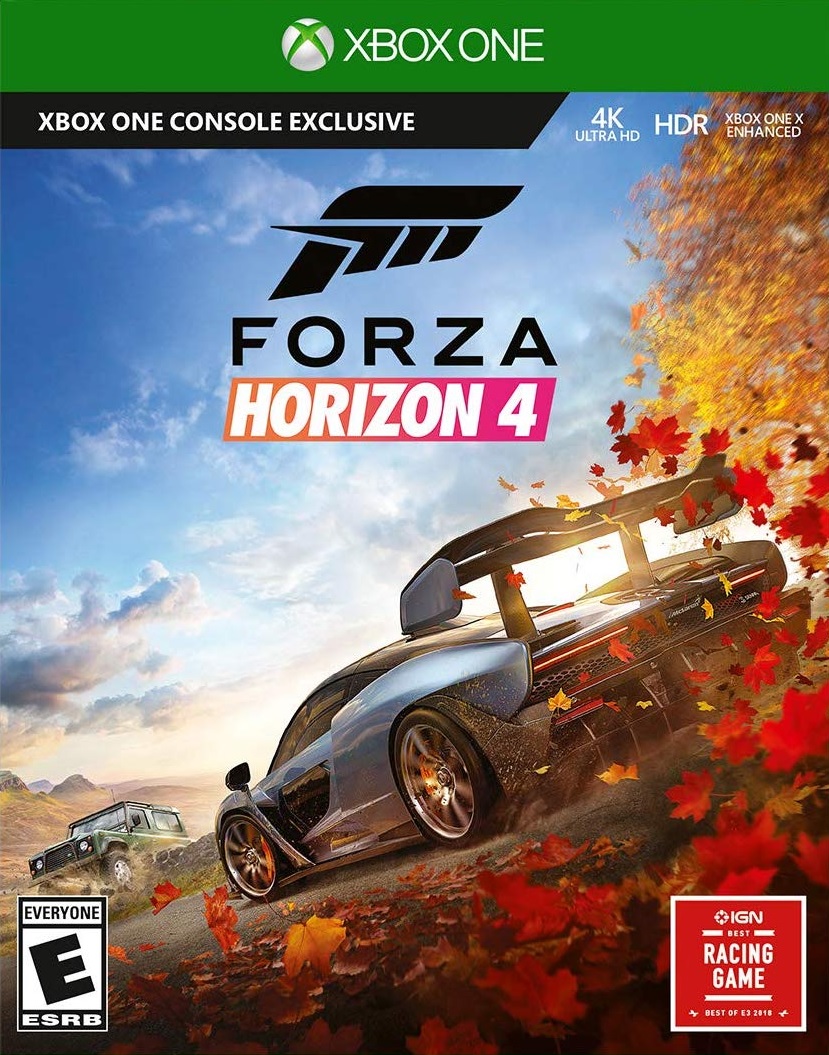 The Forza series has been an annual franchise that racing fans have been able to enjoy over the course of many years now as the series has remained fresh by alternating their releases across the more track oriented Forza Motorsport series and the open world Forza Horizon series. Last year we saw Forza Motorsport 7 bring a number of new improvements to the racing mechanics and graphical improvements to the gorgeous series and with Forza Horizon 4 looking to add even more variety to an event that already had plenty of various events to experience, is this new entry worth your time?

Following the fictional Horizon Festival that takes place every year, the event this time has shifted from Australia to the countryside of the United Kingdom with plenty of historic looking architecture and the city of Edinburgh to race through. Playground Games has made sure to pack basically everything that a racing fan could hope for in this open world racing extravaganza as far as events go and while there are a number of bigger manufacturers such as Mitsubishi and most Toyota vehicles are absent this time around, there are still more than four hundred and fifty cars for players to get behind the wheel of. 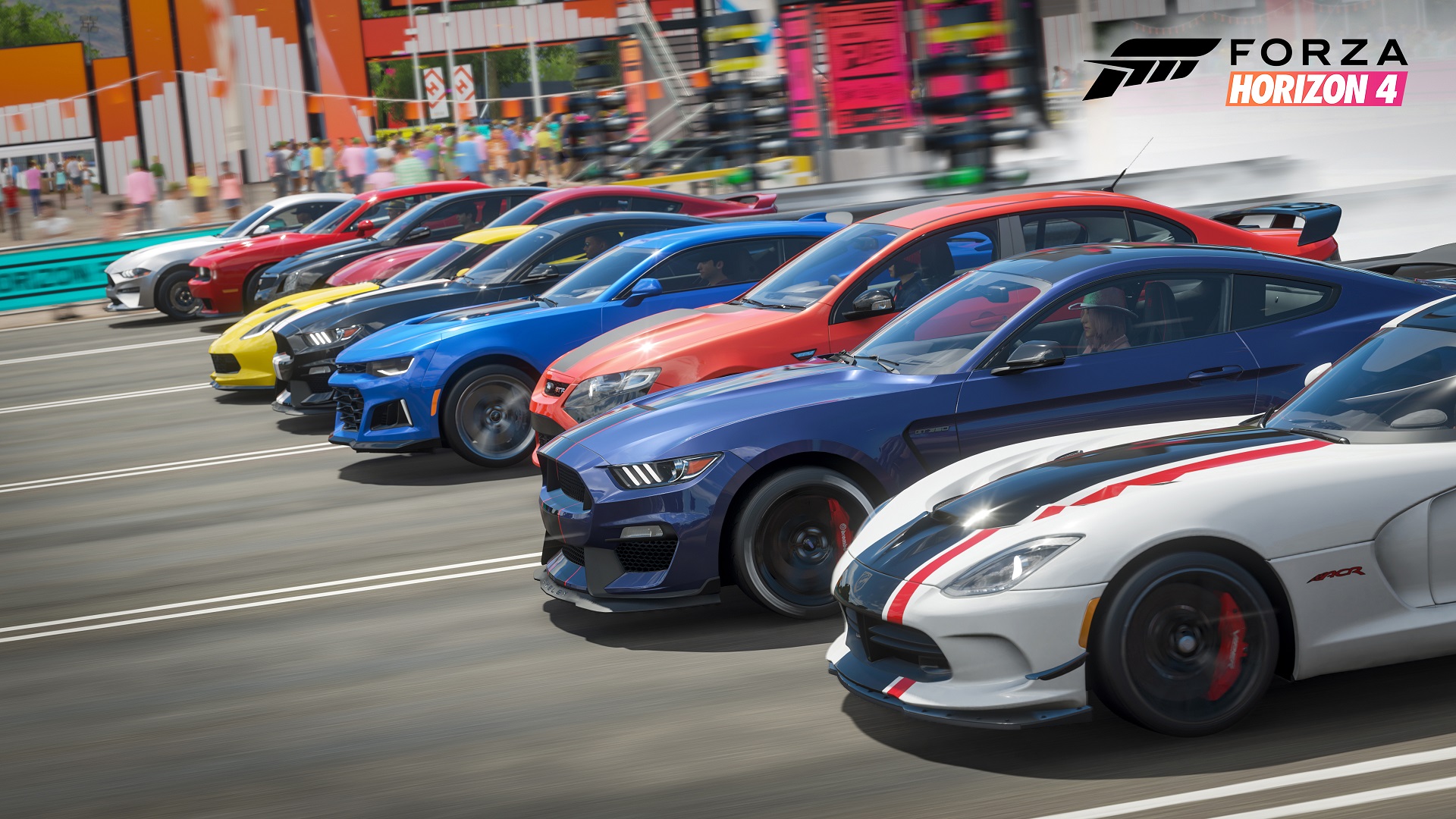 While it is true that a large number of these cars do end up feeling similar for the most part, players can add more customization to their cars through body adjustments that change the outward appearance of the car and adjust their stats, potentially unlocking new customization options as well, especially in regards to the tires since a large number of new options are available in this regard, though big adjustments can still be made through the tuning system that allows hardcore players to really make adjustments to their favorite vehicles and get the most out of their rides. The biggest difference between most vehicles comes into play when you begin to drive off-road or venture out during some of the rougher driving seasons in Forza Horizon 4.

Perhaps the biggest addition to the Forza Horizon formula this time around is Playground Games’ addition of seasons to the game. This means that players will be able to race and see the world in Spring, Summer, Autumn, and Winter and have to deal with all of the ramifications that these seasons have on the roads, outside of potholes. This means that not only does the actual look of the countryside change but some new paths will open up, especially with winter freezing over some of the water, as well as special skill tasks that can be done while driving are added depending on the season. Racing around during Summer will see players dealing with the least amount of issues though you’ll need to worry about more problems and slick roads in Spring and Autumn while Winter basically gives the entire world a new way to handle, potentially changing up your entire racing roster to best handle snowy roads. 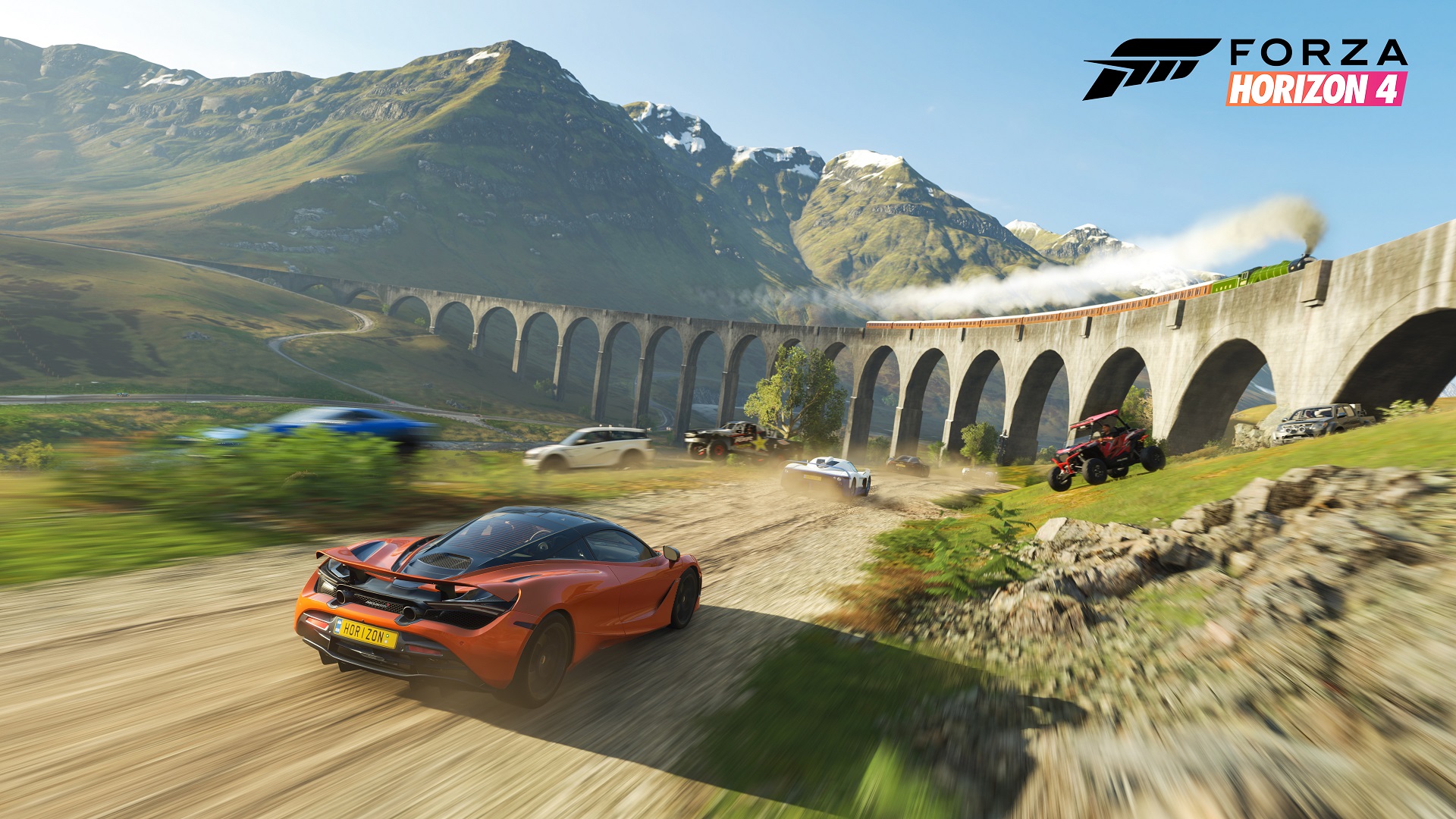 Once players begin the game they will find themselves in an extended prologue of sorts that sees them go through each of the four seasons with each season requiring a certain amount of “influence” before advancing to the next one. Once this prologue is finished players will be given access to the core “Forzathon” world where seasons will instead pass at a weekly pace. Every week at a specific time the game will transition from one season to the next and bring along with it a number of new challenges that are specific to each season as well as brand new events that occur every hour. There are even a number of multiplayer specific events such as infection and other style events that pop up here and there throughout the world.

While players will be able to see plenty of other racers’ drivatars around during the prologue, the main part of the game will feature the most at one time as over seventy other players can find themselves in a world at one time. This makes for an extremely lively experience, especially in regards to special events that see players working together to finish a shared goal during live events while playing online. In interesting fashion, players will not have to worry about griefing of any kind as driving around in exploration mode sees all drivatars being incorporeal in nature, giving players a chance to see each others’ cars and special liveries that they may have spent time working on, without worrying about crashing into each other randomly. 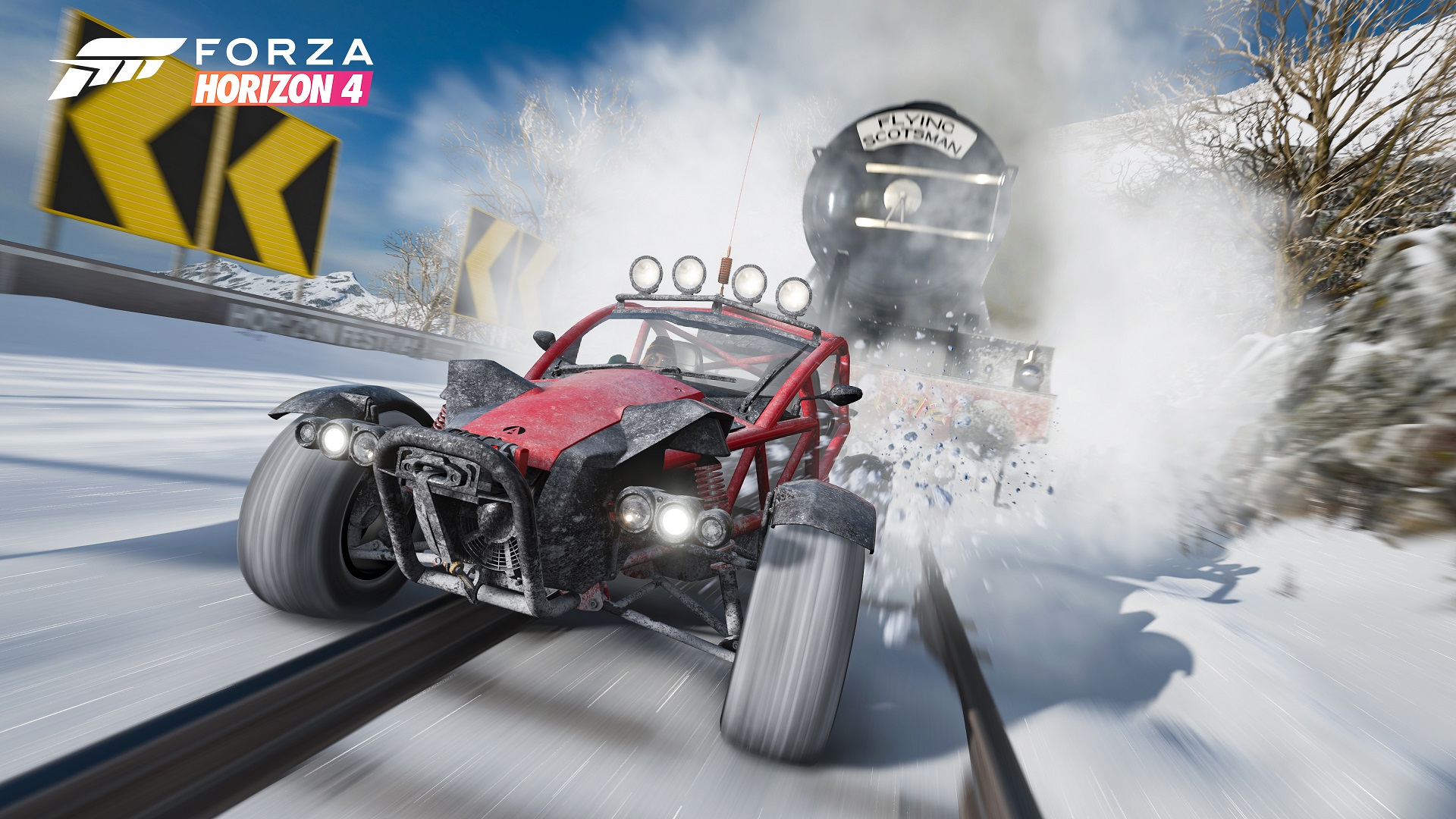 Of course if you want to play offline this option is available, though there is no real reason not to play online with others thanks to the aforementioned anti-griefing measures and the fact that every element of the game, including rewinding, finding hidden barns containing abandoned cars, smashing influence boards, racing through speed traps, drifting challenges, and more, are all available still while online. That being said, the game also will seamlessly flow players from an online mode to an offline mode if internet or server problems arise. Almost every race that players can take part in can be done solo where you race against AI drivatars taken from the world, against friends, or simply against others that want to partake in an event at the same time, allowing for players to race their way at any given time with no real limitations outside of the weather system.

As for the actual driving experiences, players will find there are all different kinds of races to take part in, be it street racing at night, racing through the countryside in some off-road rallying, or simply driving through the country roads. Add to this a number of special events such as drag racing and being able to create your own events through the use of the Horizon Blueprint mechanic as well as take part in races designed by other players, there will always be something to do. This includes a number of extremely special feeling Showcase events that see players racing against other special vehicles be it dirt bikes, trains, or even a Halo themed event. There are even little story elements that players will unlock through the game that see them taking part in “Horizon Stories” that involve them performing various races, jumps, or other tricks to complete a story segment that adds a nice little touch to a game that has featured no stories in the past besides advancing through the festival. 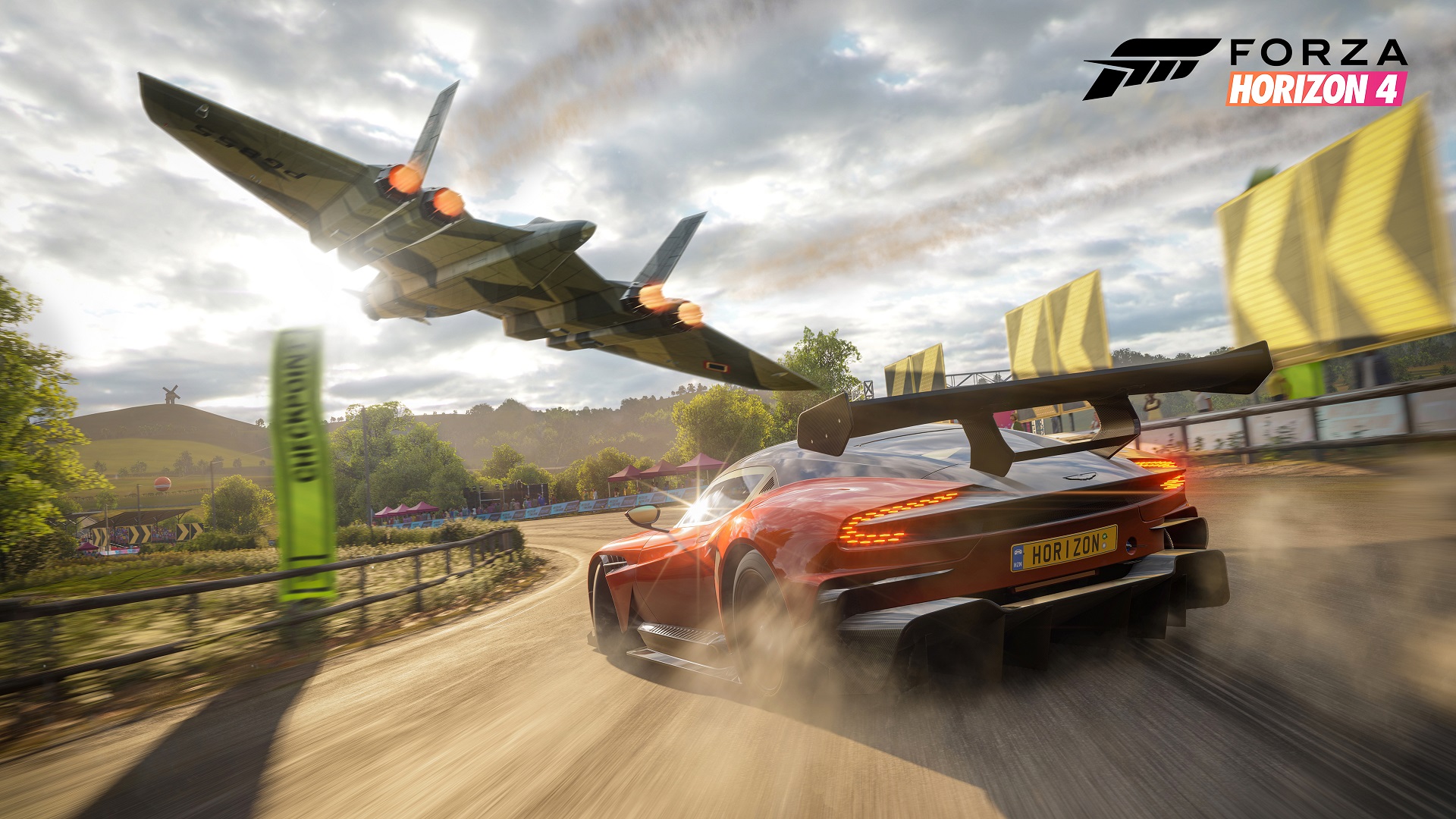 The title also features a little bit of extra driver customization since players can choose from a number of standard characters that can then be equipped with various pieces of clothing that they can unlock while playing the game. These clothes don’t really have any effect on how you race, same in regards to special horn sounds you can unlock, but do allow for players to express themselves in an extra way, especially in regards to the various dance moves and poses that you can choose to have equipped and performed during the race load times and winner’s podium.

While I cannot account for just how authentic the actual world design of Forza Horizon 4 happens to be compared to the actual city of Edinburgh and its surrounding landscape it is clear that Playground Games made sure to create an incredibly realistic and highly detailed world for players to race through. Be it fields used for farming, woodlands filled with various hills, jumps over rivers, and more, mountainous regions to try and climb and smaller villages to travel through, there is plenty to see in this game and that doesn’t even touch upon how gorgeous the seasonal changes happen to be. The environmental changes are simply stunning between seasons and breath new life into the world every time the seasons change and while it may be rather rapid seeming during the prologue, the week long transitional period is a fitting period of time to enjoy each season in the main game. 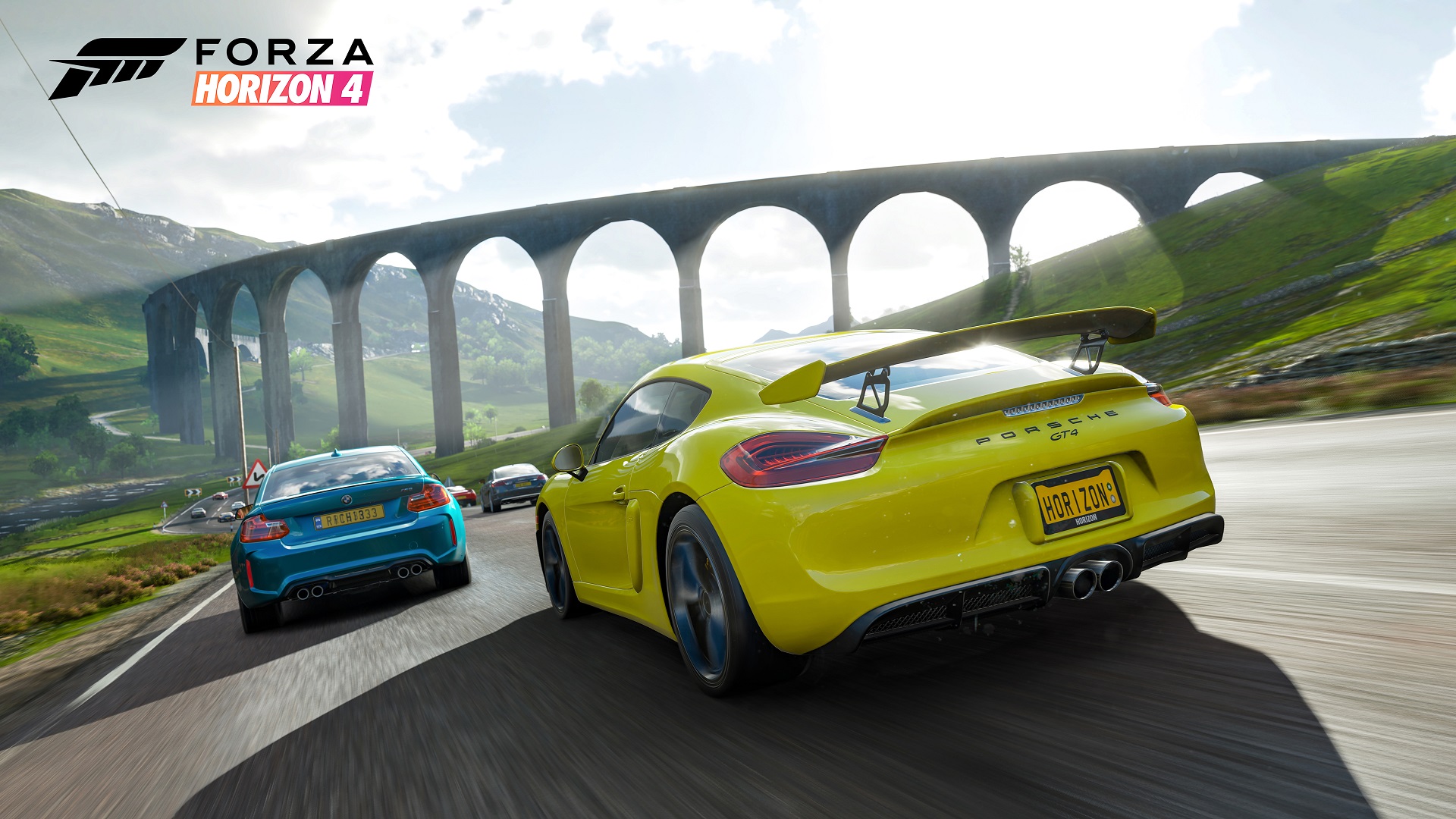 As for the cars themselves, players have numerous options for painting them as well as applying various livery designs to the outsides of them with the community already creating some stunning designs ranging from other video game themed to itasha style anime cars. Of course, the actual interiors of these cars are also lovingly recreated with a stunning attention to detail should players choose to drive from a cockpit point of view rather than from a third person angle.

The voice work for the game is fitting though players shouldn’t really expect anything exceptional here as most of the voice work is simply to introduce players to races and move things along while occasionally chatting over the radio. The radio stations feature a standard mix of songs that, at least for me, didn’t really stand out in any special way outside of offering plenty of different modern genres to enjoy and some classic music if you are feeling fancy.

Playground Games has once again hit it out of the park by delivering a racing experience you simply cannot find anywhere else. Forza Horizon 4 takes everything that made the previous entry enjoyable and added even more on top of that to create a beautiful world that changes regularly to keep players feeling refreshed and eager to get back behind the wheel and try out their favorite races while driving a massive array of vehicles to see just how each one manages to handle the different seasons. 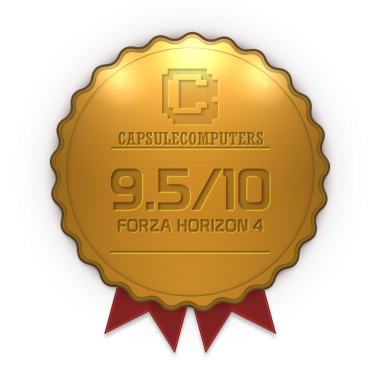 Forza Horizon 4 nails practically everything that fans of racing games could ask for by delivering a massive array of cars and extensive customization options coupled with so many different kinds of events that are altered by the changing seasons, keeping things feeling fresh for players who will want to come back for more time and time again.
9.5