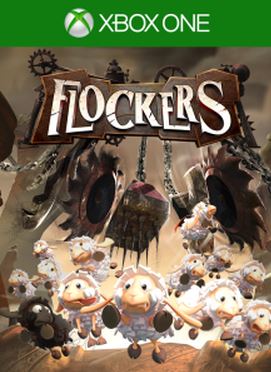 Team 17 return from the Worms franchise with a Lemmings inspired puzzle of madness, dark humour and gore in Flockers. The sheep infused steampunk universe will take players into a baa-d nightmare – a non-sexualised and more violent version of ‘Catherine’. Is Flockers the next best thing for Team 17 or just a sheep thrill? 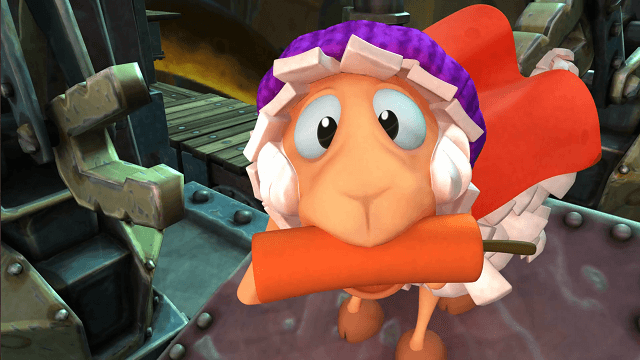 Meet the Flockers, a herd of cartoonish sheep running rampage in the Worm’s weapons factory towards freedom. To reach the green pastures, the flock must survive a series of deadly machinery and heinous traps across sixty levels, plus bonus levels. It is at the hands of you, the Shepherd, to guide the school of flock to safety by shearing through each of the diabolical puzzles. In an attempt to further the narrative behind Flockers, the game features animated cut scenes for sheer amusement. The story is feeble and simply an extension of the previous Worms titles. Nevertheless, players won’t mind too much about the lack of story, as the game engages them to apply strategic thinking, time management and tactical skills.

The mechanics of Flockers seem straightforward enough for an A to B puzzle, however there are a few elements which contribute to the challenging nature of the game. To kill a flocking herd, players just need to sit back and enjoy the show. Unless they are extremely lucky, the sheep cannot make it through the level alive on their own. Players need to strategically distribute abilities and formations to certain members of the herd, based on the number of special boxes they collect. The designer hat (purple beanie) enables sheep to jump over gaps, the red cape entitles sheep to fly up walls and the explosive device can be used to blow up sheep and destroy wooden crates. There are four types of formations – one square, two squares, two steps and three steps –most of which halt sheep to become stepping stones for accessing higher platforms, and barriers to prevent their woolly friends from committing suicide. These sheep can be released from their formations, although usually the ones that stop are left behind and don’t make to the end. 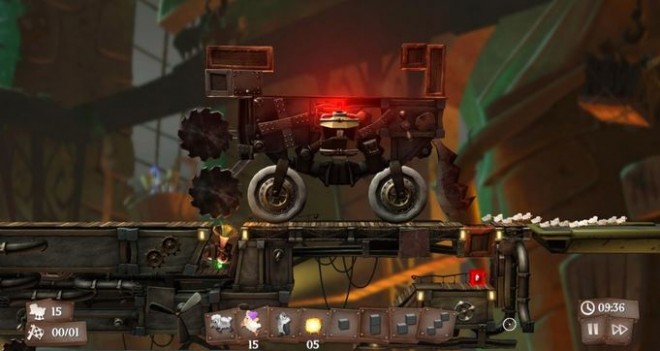 One of the most convenient in-game options is being able to fast-forward and pause at any time in each of the levels. The pause feature is particularly useful for zooming out of the map and planning the safest path/s ahead for your flock – even if there is only one sheep remaining. In contrast, when you cannot prevent the sheep shaving, it’s best to speed up the process and focus on the lambs that count. Players will get to the end of the puzzle with a few sheep still active; yet sacrifices must be made to ensure that the fittest sheep (technically the best dressed) survive.

At the end of each 10 minute level, players will receive bonuses for the sheep saved, time taken, abilities left and Golden Fleece captured. As an incentive for replay, players are rated with three stars per level for their overall performance and can earn rewards in the form of new types of sheep. For example, if you three star 30 levels you get the Skeleton Sheep. Of course, the most satisfying achievement is the Black Sheep for completing every level – it is hard to bleat! A leaderboard is accessible for online gameplay and a good motivator for players to improve their scores. 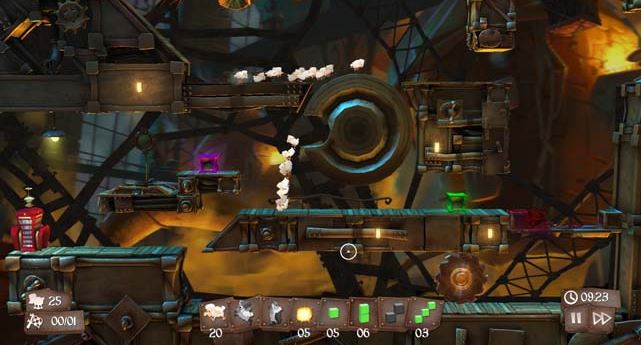 Much to my disappointment, the controls are a flocking mess on the Xbox One. Having to use the left joystick for moving the cursor and the D-pad for toggle zoom is difficult to manage in the same frame. The cursor is ridiculously slow and inaccurate (despite modifying cursor sensitivity), which makes the entire gameplay process a lot more frustrating. From the get-go, players are expected to understand how Flockers works with a few diagrams and in-game pointers. While there is a menu for understanding the game controls and having the choice to change the controller layout, the options are limited and hard to adjust to.

Flock and Awe. The visuals and animation are stunning, for the very fact that a strong contrast exists between the white cotton balls of sheep and the dark and sinister steampunk universe. Once you claim the prizes of white, green, pink, black, purple and blue blood – the massacre is a masterpiece. The lead artist, Chris Black and lead designer, John Eggett created a surrealistic atmosphere that defies gravity and teleportation for flocking slaughter, much to the macabre style of Tim Burton’s work. 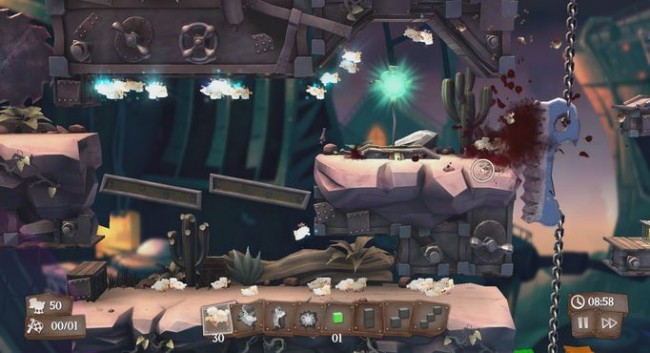 Oliver Wood delivers a rather odd and cheerful soundtrack for Flockers, almost as if players are taking a pleasant ride through a theme park or playing on a baa-cade machine. The repetitive music hits a few nerves, although works quite well as background tunes for maintaining concentration in the game. What I loved most about the sound effects and design, was the authenticity of the grinding machinery and the realness given to herd of sheep. The gruesome yelps of pain that come with being squashed to death or sliced to smithereens by a buzz saw is heartbreaking . . . the first few times. Once players accept that most sheep cannot survive, they’ll start to like the sound of them dying.

Flockers is baa far an immensely funny and entertaining puzzler, which will have players grazed and confused. Who would’ve thought that Team 17 would serve up Lamb as their main course . . . and raise the baa-r! Forgive the sheepish puns, but Flockers is definitely worth buying for avid Lemmings fans. Lucky for you, the sheep are breaking baa-d on PC and PS4 as well. From me to ewe, baa-rty hard!