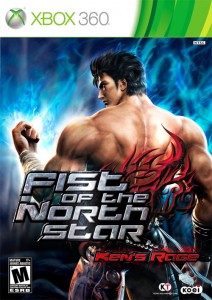 Overview:
ATATATATATATATATATATATA!!! Okay got that out of the way already. For those who don’t recognize that sound then you have missed out on one of the most violent manga/anime series to date. What I mean of course is Fist of the North Star. Fist of the North Star was originally a manga back in the mid to late 80’s with an anime series based off of it running at the same time. It featured over the top kung-fu violence with exploding bodies and rippling muscles. Now that the creators of the Dynasty Warriors have adapted the franchise to a video game setting, will it still feel just as great as it used to? WATAH!

Story:
The Earth has been ravaged by a nuclear war and much of the world is nothing more than a desert wasteland. The survivors of the disaster have banded together into different tribes to fight over what few supplies remain in the world and often these gangs prey upon the weak. Ken, the successor of the martial art known as Hokuto Shinken has lost his fiancée Yuria to his half-brother Shin and Jagi and there is nothing that is going to stop him from destroying both of them and saving Yuria.

In the Legend mode players will experience the above storyline and for the most part those who have read the manga or watched the anime will definitely be getting the most out of the experience as the game follows the story laid down by these two works surprisingly well. The characters are extremely well fleshed out and believable, including the different allies you will meet along the way such as Mamiya and Toki. 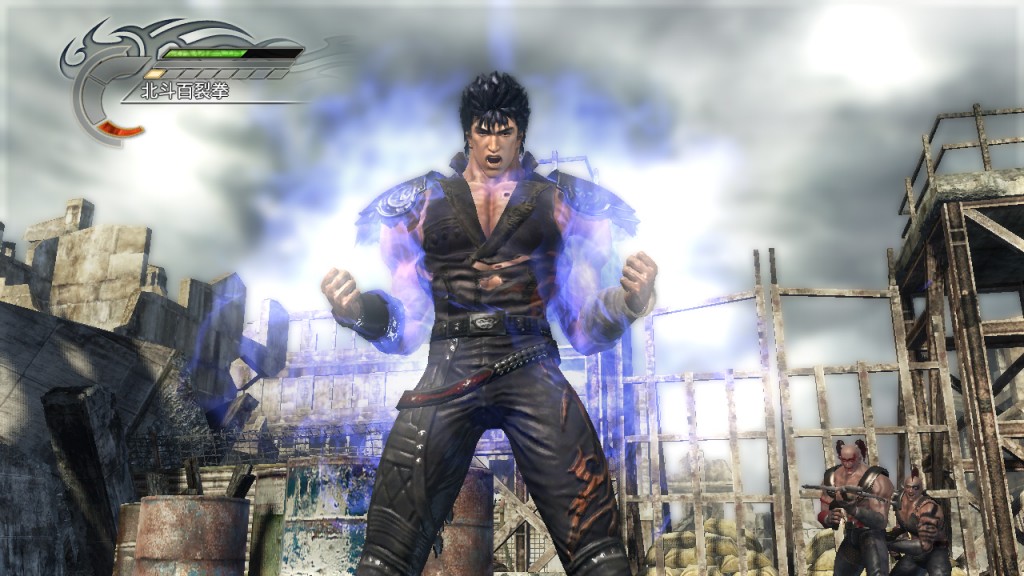 For those who haven’t had the pleasure of reading or watching the different Fist of the North Star story before there is still much to love here. There are subtle nuances that may pass under the radar due to the fact that newcomers will not have as much backstory to speak of when they find encounter certain characters or experience specific parts of the story but this wouldn’t be noticeable to new players anyways.

Also included is a Dream Mode game option which gives each character in the story a unique storyline that meshes well with the Fist of the North Star canon. Sure all of these stories are original but they are all well done and only a handful will feel like they were rushed through simply to be another character on the list.

Graphics:
Those who are familiar with the Dynasty Warrior’s franchise will find themselves amazed by how great Ken’s Rage looks. The graphics are really well done and the characters themselves have been received an updated visual style that matches their characters from the original story perfectly. The character motions and attacks are very well done and feel as fluid as karate should be. Enemies explode like balloons full of blood after receiving perhaps the best recreations of the character’s special moves that I’ve ever seen.

There are some problems however with the graphics as the areas that you fight are unfortunately not very varied. Of course you can give Ken’s Rage a little bit of breathing room because the setting is a nuclear wasteland after all, but there could have been at least a little more variation in the design of the different levels. Plus the camera itself is occasionally an issue as it reacts slowly to your movements. You can control the camera yourself but it is unfortunate that you have to pause your killing performance simply to adjust the camera to make sure you are hitting the enemies still. Also there are noticeable drops in framerate during parts of the game including parts of heavy action. 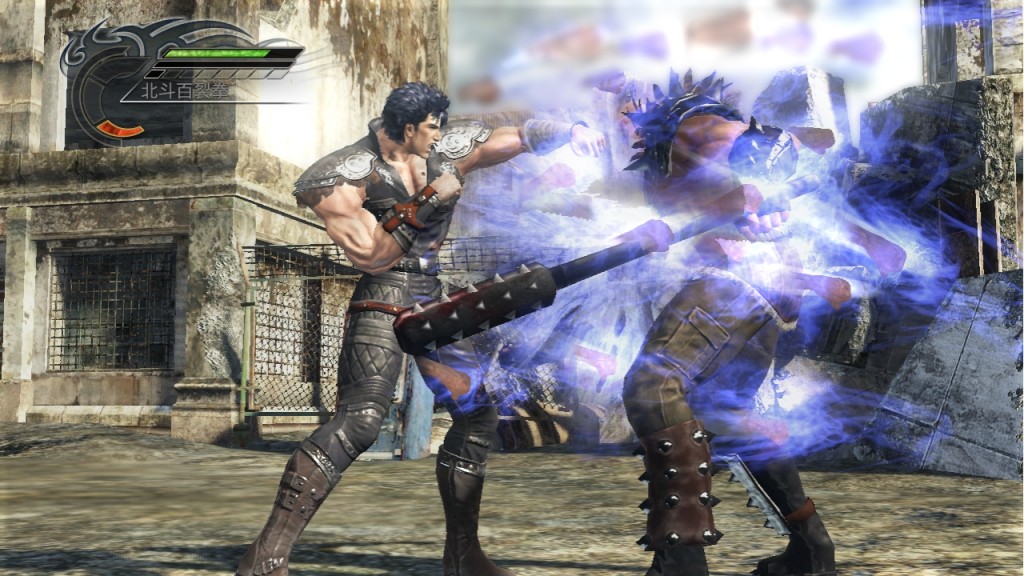 Audio:
The background music that takes place during your battles is more or less all rock songs that are there so you have something to fight too. Unfortunately this means that there isn’t anything memorable and it can easily be forgotten, meaning it is serviceable at best. The voice acting is also subpar on the English setting. The voice work is often done poorly and unbelievable but thankfully there is an option to turn on the original Japanese voice work and have subtitles translate it for you. It is worth noting that the option to pick between the two dialogues is a nice addition as lately many games have forgone including the Japanese voice work and this can cause some original fans to be upset with the subpar dub work.

Gameplay:
As you start up the game you will notice that there are three different modes you can choose from. Legend Mode is another name for story mode and will follow the main story of Fist of the North Star pretty faithfully. You will be able to pick between Ken, Mamiya, Raho, Rei and Toki to play through their story missions. The Dream Mode as I mentioned earlier will take you through a unique story for each character supplied inside of Ken’s Rage. Finally the third option is Challenge Mode which means survival mode where you attempt to survive as long as possible against waves of enemies.

Now Ken’s Rage may not appear very unique, as far as fighting goes, to those who have already played any Dynasty Warrior games in the past; considering much of the game still has the same elements of the series translated into different forms and given new skins. If you have never actually played a Dynasty Warrior game before then you will easily be able to ease yourself into the game with the simple control scheme which you will be introduced to immediately and will most likely not need to elaborate on throughout your experience. 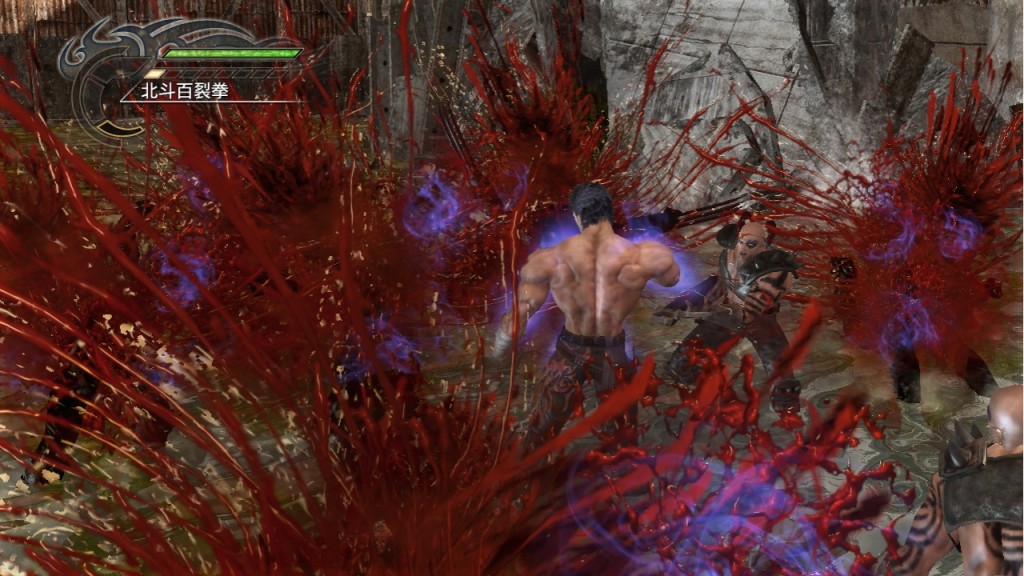 You have your basic light attack and heavy attack as well as jumping and blocking. Also special Musou moves return in the form of Signature Moves. These are performed after filling your Spirit Reserves Gauge by killing enemies and stringing together large combo attacks and every time that is filled you will store away the energy to be used later for a Signature Move. These Signature Moves are yours to choose and one fighter can hold four at a time. These can be chosen with the D-Pad and each one will take off saved energy bars. The higher the cost obviously the more elaborate the move and the more damage it will do to the enemies around you (also the cooler it will look).

Also fighters will build up something known as a Focus Gauge as they battle. The more damage you take and deal will raise this gauge. The player can use their Focus to make their attacks unblockable and do more damage by pressing LT. Also during this mode players can use something known as the Hyper Signature special move by pressing the standard Signature Move button and this attack will decimate enemies around you and deal heavy damage to boss characters. This grows essential in later levels as bosses are difficult to defeat and occasionally regenerate health which causes them to be very troublesome opponents to beat.

Also included into the game is the Star Chart which some will remember from the Fist of the North Star saga. The Star Chart forms the stars of the Little Dipper and you can complete different challenges that are given to you per stage and will buff your characters abilities if you can complete the challenges. These are a nice little addition and usually are just difficult enough to give the player a challenge or try something they would not have aimed for before. 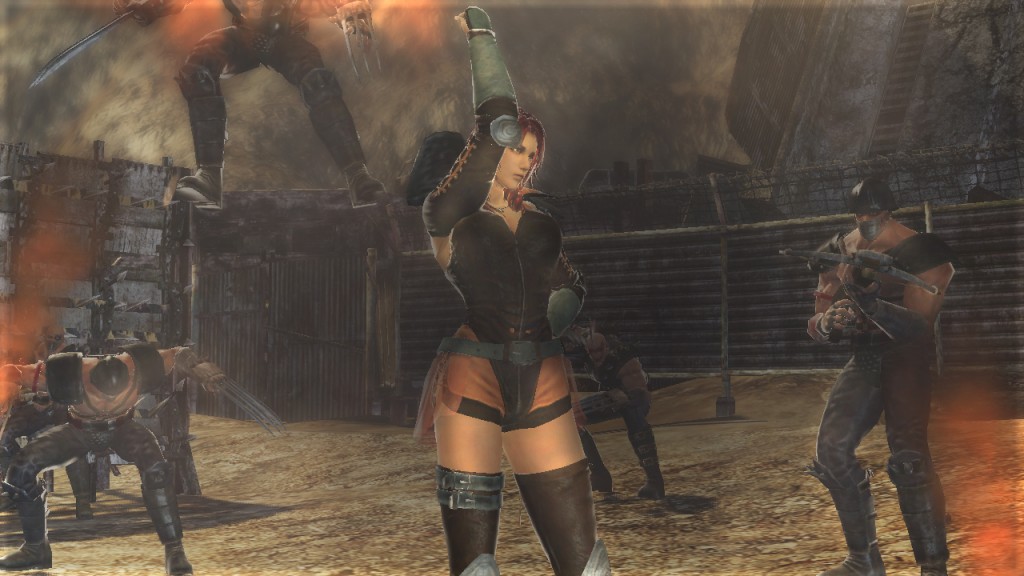 Unfortunately there is no online multiplayer to Ken’s Rage. There is local multiplayer which turns the game into split-screen format but it would have been nice to experience at least Dream Mode with other players online. There is plenty of replayability that is to be sure, what with all of the different Dream Modes you can play through and the ways you can level up your fighters to stronger heights but an online option would have been a nice addition nonetheless.

Also worth mentioning is the fact that although there is a lot of replayability within Ken’s Rage there is also a lot of repetitiveness. Enemies are not very varied beyond the unique boss characters and the areas you traverse are all very similar to one another and even with all of the different body bursting attacks you have at your disposal some players may quickly fall into a lull of button mashing simply due to this repetitiveness.

Overall:
Fist of the North Star: Ken’s Rage faithfully brings with it much of what fans of the series will love. The storyline is there, the characters make the transfer flawlessly, and there is plenty of blood and martial arts to be had. Unfortunately those new to the series will not get quite as much enjoyment without the nostalgia bug but should enjoy the story just as much. If only there had been at least a little bit more change from the standard Dynasty Warrior formula to save Ken’s Rage from becoming repetitive and bland at times due to similarly designed areas and repetitive fighting.

I give Fist of the North Star: Ken’s Rage