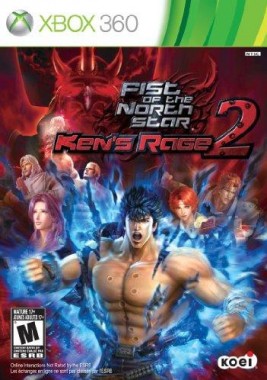 Overview
Fist of the North Star: Ken’s Rage hit shores back in 2010, allowing players to relive one of the greatest mangas of all time in video game form. Fast forward three years later, and it is now the 30th anniversary of the franchise, and no better time to see a return to the story that made one warrior into a legend. I never really got around to playing the first Ken’s Rage, but being a fan of Tecmo’s similar series, I found a lot of reason to be eager to get my hands on this anticipated sequel. Does this follow-up have all the right moves? Let’s find out.

Story
If Ken’s Rage 2 does anything well, it’s telling a story. Sure, the gameplay (which we will cover in a moment) is solid, but the already lovely manga series has been spanned out and streamlined for easy consumption, providing a roller coaster ride for the player – full of ups and downs. In the meat and potatoes of the experience – known as Legend Mode, players take the role of Kenshiro, reliving old feuds and encounters that we seen in the first game – while getting to go a bit further and run through a few new arcs exclusive to this sequel. The overall length of the story is drawn out due to the amount of material Omega Force packed in, and if you happen to be a fan, you are bound to be pleased on all of the lore and fan service on display. 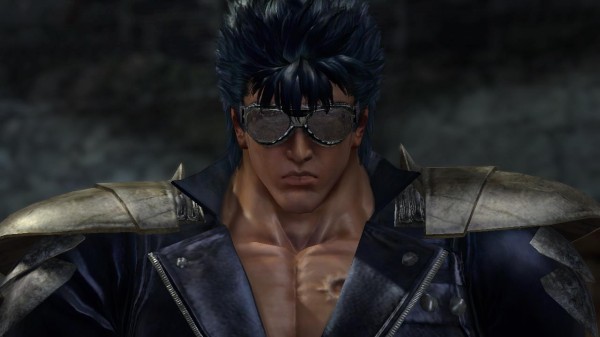 The narrative itself is sure to keep even those who are not familiar with the franchise interested, but that isn’t really the highlight. Instead of seeing cutscene after cutscene, this follow-up tells it’s story frame by frame, as if the player was reading a living version of the manga. Yeah, it can take some time to get used to following the plot in this manner, but that in itself doesn’t take long so all that is left is to sit back, pummel enemies, and enjoy the over-the-top sequences as they occur (and trust me, there are a lot of these sequences throughout both Legend and Dream Mode). 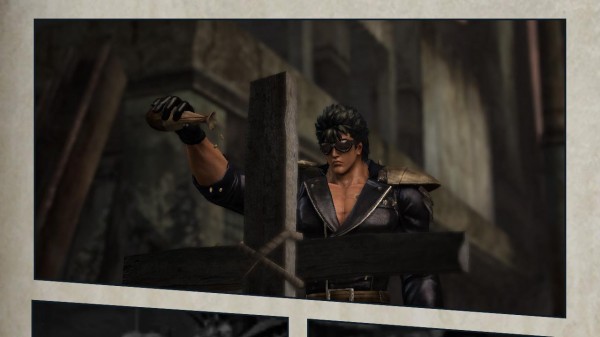 Dream Mode also holds up a bit of the story as well, allowing players to take the roles of enemies and allies alike and participate in some non-canon scenarios that further the possibilities of the cast, increasing the game’s replayability greatly as players unlock new characters during their time spent within Legend. Yeah, some of these arcs can be less impressive than others, but Ken’s Rage 2 certainly goes out of it’s way to please the open-minded, answering those “what ifs” with it’s fine rewards.

Gameplay
If you are familiar with any Omega Force title, you know what to expect from Ken’s Rage 2. Dynasty and Samurai Warriors alike have been offering the same, fast-paced brawling experience for years now, and this title shares that same concept – but focuses on hand to hand combat for it’s main protagonist. Kenshiro is a beast in combat, and can tackle thousands of enemies at once with lighting fast punches and kicks, as well as a variety of special moves. As mentioned, this is all displayed in Legend Mode, where the player runs from point A to point B, fighting mass crowds of foes in order to progress further. From time to time, there will be a boss fight to change up the pace and there are even a few stealth sequences mixed in, but none prove to be as prominent or as the satisfying – than the fluid and fast beat-em-up stylings within. 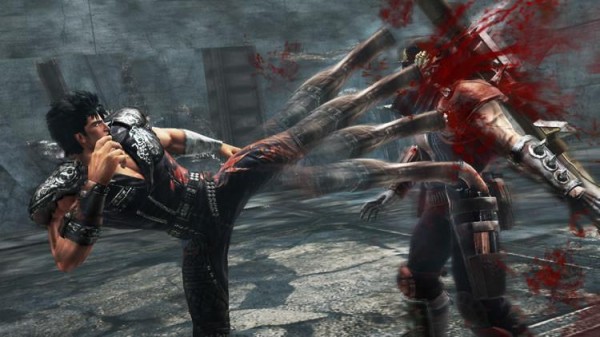 Controlling Ken comes easy enough, as all attacks have been mapped out accordingly, with our hero featuring a strong attack, weak attack, a dodge, and a special maneuver – ready to be used at the tap of a button. Much like the Warriors franchise, Ken’s Rage 2 rewards the player for chaining together large combos, and never proves to be that much of a threat when it comes to difficulty due to the large amount of items scattered about and the handy auto healing technique Ken automatically utilizes outside battle. Yes, this sequel is definitely accessible, but there is a small amount of depth to be found under the ho-hum mechanics of the past. As enemies are defeated, orbs are dropped that boost Ken’s own experience. These orbs as a bit of a leveling system, adding experience to scrolls in order to level up one’s main stats. If all of the five allotted scrolls are aligned, that particular stat will see a hefty bonus and access to a new skill. Now, this does work, but is a bit confusing to follow as there are no experience gauges to speak of, and the player literally will have to find out when the hit a new level as it happens. 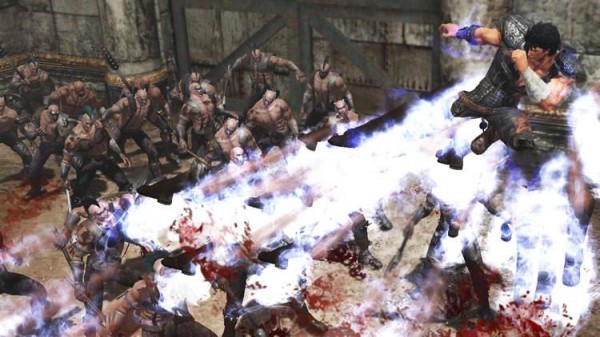 That really isn’t too much of a setback, however – as the system is rather unique and useful, giving this game a bit of it’s own flare amongst the other Warriors titles that seem to stick to the same rule set. Skills of course are learned as the player makes their way through the campaign, adding unique abilities for Ken to utilize in combat. These moves are fine on their own, but prove to be strongest against bosses or enemies with a lot of HP, as it can be a waste of power to focus the stronger attacks on standard enemies when a few punches can take out large groups in one small combo. That is really where the biggest problem of Ken’s Rage 2 lies, honestly. It has the tools to be great, but never offers anything new to test them out. It’s always battle, cutscene, battle, boss, and that along with the rarely changing combat becomes tiresome rather quickly. You got a new move? Well, you can use that later and just focus on clobbering the reskinned foes yet again.

It doesn’t help that the environments and level design don’t differ too much. Even when changing arcs, the layout of each stage stays true to the non-strategic punch-punch-punch gameplay, only slightly changing things from time to time and never fully taking advantage of the “destructible” environments that fall apart as enemies fall against walls and poles. Sure, you can sometimes pick up a large weapon to clobber enemies with, but that in itself feels less polished than the much more fluid combat and is a bit too much of a hassle to deal with. When you are trying to build up a massive combo, are you going to want to continue to use fast techniques that dominate waves, or would you rather try to play with an item that kills the fluidity and combo chain in an instant? I give the game credit for trying to break the monotony, but there really is no true way around the same, button mashing fare – leading to a final product that can get boring if played in long stints. 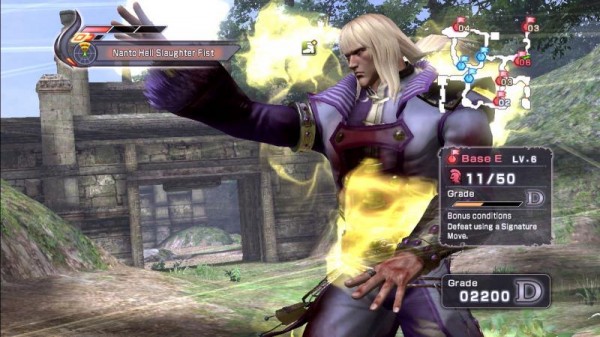 On the upside, Dream Mode does change things up enough to warrant several playthroughs. Taking a page from Dynasty Warriors, this mode lets players try to capture one base at a time with a new character that has a whole new moveset and ability list. The same leveling system and scroll system are still at work, but the changes at hand do wonders when it comes to giving the player a break from the often tedious Legend Mode. Dream Mode also can be played in co-op (local or online), and speaking of online, a nice little competitive fare can be found that allows for up to 8 players to team up and duke it out throughout several of the game’s main open areas.

Visuals and Audio
As far as the graphics go, not a lot has changed with the Omega Force line of games, and while Ken’s Rage has it’s moment’s of beauty, the in-game visuals are pretty average at best. Again, the manga gimmickry while cutscenes are playing was a nice treat, but that too seems to come at a cost. Every single time a cutscene or event is about to take place, the game has to go into a loading screen. I have had my own loading times clock in near 60 seconds at a time, and while it is understandable having to load in all of the on screen enemies at once, this downtime can get a bit frustrating to see due to how often it occurs. Ken’s Rage 2 does indeed handle itself well while mass amounts of models are on the screen at once, as I rarely noticed any slowdown or framerate issues despite the heavy use of animation. 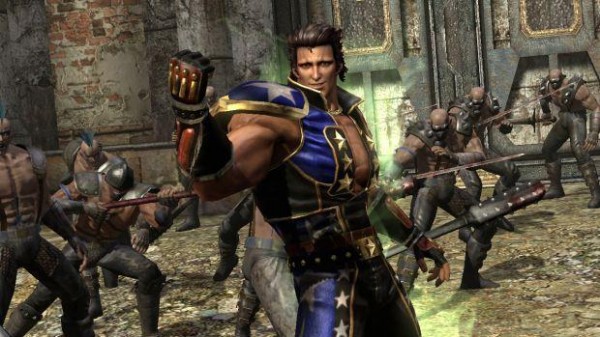 As far as audio goes, the soundtrack is about what you would expect, with light – sentimental music capturing the emotion of a gripping scene, and fast paced rock setting the stage for some all out war. Unlike the first Ken’s Rage, this sequel does not offer an english dub, so those who are not fans of Japanese voicework will probably be disappointed in this questionable omission. The sound effects are superb however, making the combat feel satisfying and completely ludicrous at times – which is just what most will want to see as enemies explode before their very eyes.

Overall
Fist of the North Star: Ken’s Rage 2 is a game filled with content, but lacks the proper depth to push the video game adaptation series further. Combat is rewarding, enjoyable, and never misses a beat – but the lack of strategy or focus turns the polished gameplay into a wooden leg that starts to wobble as more hours are racked in. Sure, I love watching enemies explode and the over-the-top cutscenes on display here, but even with a high tolerance, the repetition began make this otherwise great game falter. Fans of Ken’s Rage or any of the Warriors games – you know what to expect as this is just another worthy addition to that collection. Those that are just seeking a fast paced brawler however might want to look elseware until the price lowers on this one, as while solid – Ken’s Rage 2 blinds itself with it’s own basic formula, and takes a hit to the gut as a result.