Overview:
Fire Escape brings back the classic and retro feel everyone knows (or once knew) and loves. You play as the fire captain in the game and you have to use your trampoline to save babies for a crying woman who has one to many children. With the game bringing back the nostalgia due to the games graphics and music, it takes you take you back to the good ol’ days! Now, lets see how the game really shapes up.

Story:
There is no actual story for the game, and you know what? It doesn’t need one. The game itself explains it all, you are a fire captain with another firefighter trying to rescue babies and return them to their mother. While most people would usually be upset if a game has no story, this game proves that not all games need an actual story. If there was only one thing that I would like to see explained that would be equal to a story would be why this woman has so many dang babies.

Gameplay:
The game play is as simple as you would expect, all you have to do is either tap the screen in order to position the trampoline to where it will cause the babies to bounce off it and get safely to their mother. They also give you the option to use tilt controls but that is a little difficult due to the speed the babies will randomly appear. 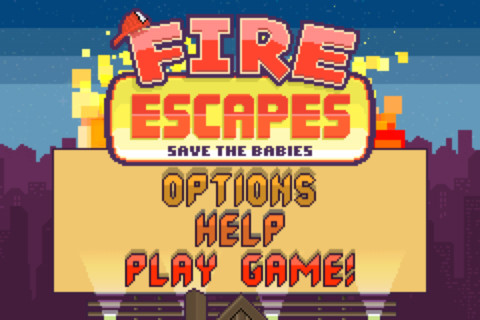 As you can see, they have made the controls very straight forward and easy which is a good thing compared to the confusing controls of most games that have been releasing in the past few years.

Visuals:
The graphics for the game are absolutely stunning. The game is done using 8-bit graphics but, they have made the game crystal clear. In other words, there is no blurriness or fuzziness that most 8-bit games have today.

The game has no lag issues and plays perfectly. Even when you have the little annoying Game Center message pop up when you begin to play the game, it causes no lag whatsoever. Also, when you tap and the firefighters move, they move at a perfect speed and show no sign of trouble. 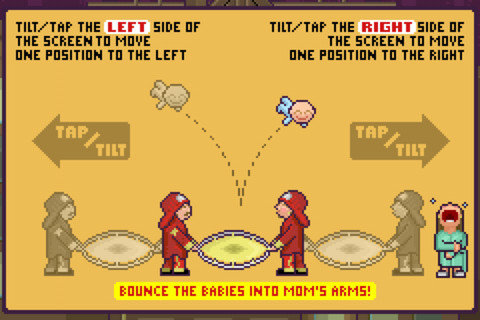 The colors the used for the game are perfectly balanced. They have some intense colors like red but, those are balanced out by more calmer colors like brown.

Audio:
The music for the game is a nice retro song that reminds you of music from classic titles you would play at your local arcade. They keep the tone of the music upbeat and cheerful, and that is funny considering you are in a life or death situation. They only thing I would have done different is  lower the techno level down a notch. 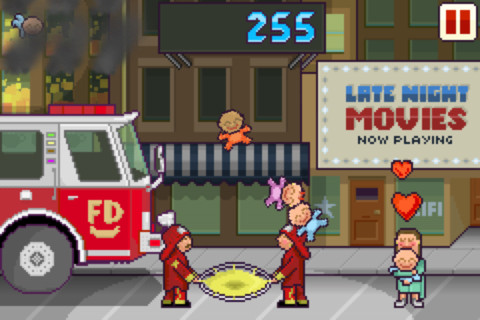 They sound effects for the game are good also. You hear the sound of a crying baby when they appear and you hear them say their first word ‘ow’ when they land on the pavement and die.

Overall:
Fire Escapes is truly a hidden treasure that everyone should buy and play. With its great graphics and gameplay and the wonderful audio the game has, it is truly hard to tell if there is anything wrong with the game, and that’s the thing, there isn’t anything wrong with it.