Overview:
Whenever Square-Enix announces the release of a brand new Final Fantasy game, that doesn’t take place online, much of the gaming community rejoices in the announcement and can’t wait to see what is to come in the newest iteration of Final Fantasy. On March 9th, 2010, the world outside of Japan was treated to Final Fantasy XIII, and what a treat it is.

Story:
Final Fantasy XIII contains two warring worlds; the floating paradise city of Cocoon, and the harsh monster filled world of Gran Pulse beneath the floating Cocoon. Each world contains god-like beings called the fal’Cie. These beings oversee their own respective world and choose certain humans to complete a task for them. Humans chosen for these tasks are branded, and named l’Cie and given a Focus, if they do not complete their focus in a certain amount of time, they will lose all that makes them human and be turned into a beast.

Gran Pulse l’Cie are the mortal enemies of Cocoon l’Cie, yet with the fighting growing so intense over the many years, public fear of all l’Cie has risen to astronomical heights. So much fear that the government of Cocoon, called the Sanctum begins a mass exile, called The Purge, to anyone who they suspect has been influenced in any shape or form by Gran Pulse or Pulse fal’Cie. A select group of heroes has been marked as l’Cie by a Gran Pulse fal’Cie named Anima and must complete their unknown Focus and try to survive the whole world of Cocoon hunting them as enemies. 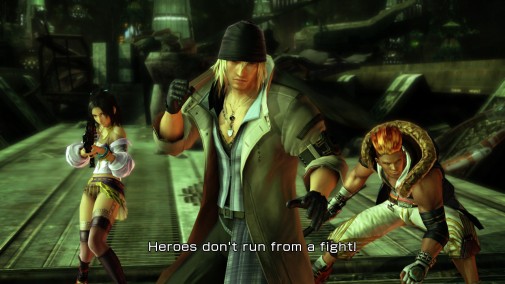 The story is driven entirely via cutscenes there is little talk outside of cutscenes that reveal any story information. This leads to extremely heavy cut-scenes, some sessions lasting upwards of ten minutes without any player interaction. However the story loses absolutely nothing in regards to being limited to cut-scenes. Actually, this is beneficial to the story, allowing every player to fluidly follow the storyline without worrying about missing a small section because they did not speak to a certain person.

Lightning, Snow, Hope, Sazh, Fang, and Vanille are our heroes. Each of these characters have different reasons for fighting the Sanctum and all fal’Cie, both Pulse and Cocoon. These reasons are explored through the in game cutscenes mentioned before, and the dramatic use of flashbacks, which portray what eventually leads to The Purge. Each character begins to feel like a real person and this can cause many traumatic moments when you question exactly what is going to happen next which could affect one of your party members. The characterization is so in-depth in FFXIII that you may even begin to sympathize with those who draw their weapons against you. 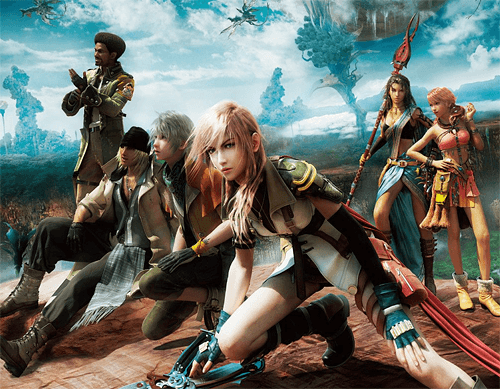 FFXIII’s gameplay has been changed drastically from every previous iteration of the series. In many ways this is a turn for the better, though there are some drawbacks. Such as the way the game world is structured.

When the game begins, it is extremely linear. You will be spending all of your time running down pre-set corridors with only slight deviations from the path, which will only lead back to the same path. You will be fighting monsters displayed openly in your path, and find treasure chests which are hardly ever hidden. There is literally no exploration of the world around you. When you arrive in a town, at first it may feel like you have finally come to the point of exploration however even towns are treated like linear dungeons. This becomes a problem after hours of corridor exploration; you may begin to wonder if there ever is an explorable world on the outside of these hallways.

This is hardly a horrible part of the game however, because though it may become slightly boring traveling only down hallways, the pacing of the storyline is amazing, so even the same hallways will eventually begin to not bother you anymore. Eventually though, the hallway ends and a new open world is brought before you. 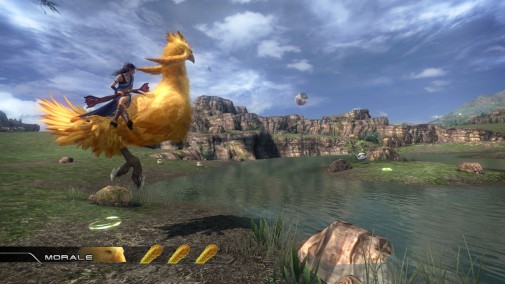 As you travel through the game, you will be fighting lots of monsters. And the battle system used to fight these monsters has been rebooted with only one small hiccup, rivals some of the best fighting systems seen in any other Final Fantasy game. Anyone who has played a FF game before knows about the ATB gauge, otherwise known as the Active Time Battle System. This system involves waiting for a small period of time before you can attack, shown by a gauge that fills up over time.

However this ATB gauge has been modified and broken up into separate parts and each action used takes up a specific amount of those parts. An example of which is that attacking takes up 1 segment of the gauge, while a powerful fire spell may take up 2 or even 3 segments. Commands are stackable so that they are all executed in a combo once the time bar is filled all flowing into the next seamlessly without further action taken by the player. As a potential bonus, there is no MP in this game, every action just takes up varying amounts of the time bar to execute. This type of battle system is extremely fast paced and if you are not careful you may fall during battle. While this is a main problem with the new battle system.

Every member of your battle team is not controlled by you. Only the Leader of your party is under your control, while the rest of the party members act out their rolls in the battle as the computer AI tells them. However unlike previous FF games, if the Leader of the party, as in the character you are controlling is to fall unconscious in battle. The battle is over and you must restart to an area prior to the battle and try again, or try to avoid said battle. This is a large negative, as it makes no sense that the other party members can not use a Phoenix Down or a resurrection skill to raise the leader back to life, and continue the battle. 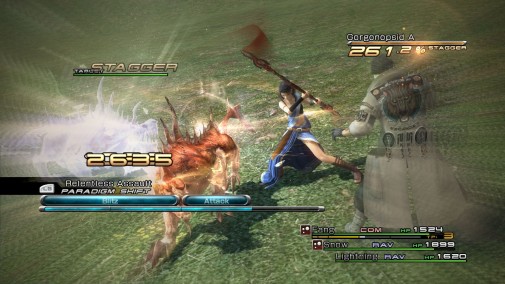 There are two new parts added into the battle system as well, and these two additions are the main focal points of every battle you will fight in FFXIII. One of these two points is the Stagger Gauge. Every enemy has a yellow bar with a percentage shown above it. This percentage is the amount of damage that you do to the creature, meaning the higher the percentage goes, the more damage you do. Once the Stagger Gauge fills up completely, the enemy will become staggered and the percentage number will jump exponentially. Extreme damage can be done to staggered enemies, including a variety of attacks that are not usable otherwise.

This Stagger gauge is a great addition because it encourages you the player to think about the battle as it progresses and focus your offense to bringing the enemy to the staggering point. This is not always easy as every enemy varies slightly and some are only able to be defeated once they are staggered.

The Paradigm Shift is the second, but the most important part of the entire battle system in FFXIII. Each character is proficient in 3 different battle classes. There are six classes; Commando which focuses on attacking enemies, Ravager which specializes in elemental spells, Sentinel which attracts enemies attacks and defends against them, Synergist which buffs your party, Saboteur who debuffs the enemy, and Medic who heals your party members. During battle, by pressing the LB button, you are able to cycle through all of your paradigms and shift between them on the fly during battle. 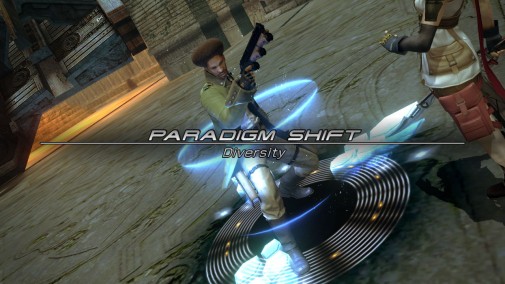 However with all of these new additions to the battle system, the fights are amazing to behold as they unfold before you. Well timed blows can destroy a staggered opponent, while a well timed paradigm shift can save your entire party from an otherwise game-ending attack. With this fast paced and intuitive battle system, I hope that this is a sign of things to come from the usual JRPG battle format.

Alas there is no leveling system in the game to speak of. At the end of battle you will receive something called Crystogen Points (CP), and these points are applied to a stat increasing board called the Crystarium. Each character has three different Crystarium boards for each of their main Paradigm classes, and by using these points you gather by defeating enemies, you can progress along the board activating various nodes that will either increase your HP, strength, magic, or teach your character an entirely new ability. 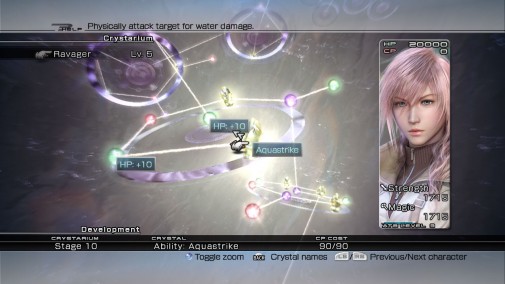 The Crystarium layout is surprisingly different for each and every character, while the class may be the same, two Synergists will not begin with the same starting abilities, though eventually they will begin to learn the abilities they may be missing. Also any Strength, Magic, and HP boosts earned through the various class’ crystariums will be added together overall, allowing points to be distributed evenly among the three classes each character has without the worry of losing a specific stat boost.

Now what would a FF game be without the summoning of giant creatures to battle alongside your party. These summoned creatures in this game are named Eidolons and they will replace the other two computer controlled party members until the Eidolon departs the battle. Once they arrive you can battle alongside them against your foes and raise a bar called the Gestalt bar. By pressing X, the Eidolon will enter what is known as the Gestalt mode. This mode transforms the Eidolon into some type of vehicle or ride-able creature, allowing your character to unleash powerful attacks and even unleash the creature’s ultimate attack. 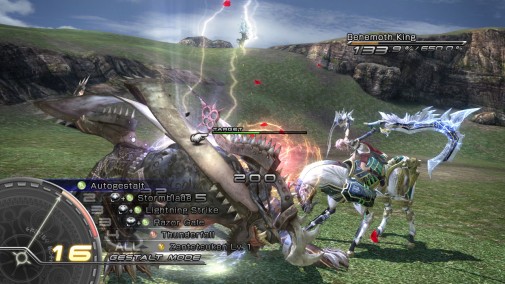 If there is one thing to be said about FFXIII, it is gorgeous. Each character is perfectly designed and the expression on their faces matches their emotions perfectly, making literally nothing lost in translation. The graphics and the world are vividly colored, making all those linear paths to explore as you traverse them. There is a feel of combined themes between some of the environments and the monsters inside them. At one point it will appear that you are in a factory, only to see that there are forests growing inside the buildings as if they have always been there.

Last but not least the music matches the world perfectly and is absolutely fantastic. Of course some tracks are better than others, but the battle theme is superb and contains one of the best soundtracks of the FF series.

Final Fantasy XIII is quite honestly one of the best RPGs on this generation of consoles. Not only that but it is a vast improvement over the standard JRPG, consisting of slow paced battling and muddled storylines. Of course not every bit of the game is perfect, but that doesn’t mean that FFXIII does not deserve the praise it is receiving, because it most assuredly does.

I give Final Fantasy XIII a staggering