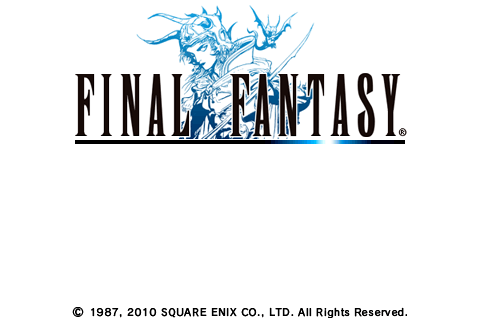 Overview:
Here we have the original Final Fantasy. The finale of all fantasy games as we know it… until they made twelve more over the next 23 years. This is the game that started it all, from FFI to FFXIII many have been quite stellar in every aspect, while a small few remain famous from the Final Fantasy namesake alone. Which category does Final Fantasy I stand in? We shall see my light warriors.

Story:
FF1 is set in a world with three large continents. Over the years the world has grown harsher; the lands are dieing, the oceans are turning savage. The world is governed by four mystic orbs, each one representing a specific element of either fire, water, wind, or earth. Yet these four orbs have grown dark and lost their mystic power causing an imbalance in the world. Four brave Light Warriors, each holding one of the darkened orbs have appeared and must journey to correct what damage has been wrought upon the world. 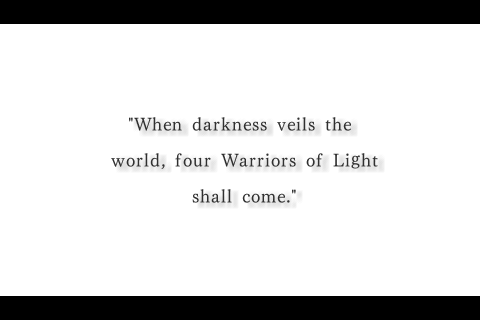 The story itself is quite basic, however it is hardly fair to declare this a detriment to the game due to the fact that this was one of the first RPGs made for consoles and pretty much defined this type of storyline. The storyline itself is driven through speaking to certain NPCs in towns and then gathering information about where you must go to defeat the evil in the area. However most of the time the NPCs that you speak to will only repeat the exact same thing the last NPC said, but with slightly different wording. There are large amounts of dungeons to traverse to defeat said enemies, however there are only a few side-quests but thanks to the addition of five new dungeons, there are many side dungeons that were not available when the game was first released.

Gameplay:
Final Fantasy I was the epitome of turn based combat in RPGs. Your party members stare dead into the eyes of the monsters that have attacked them. There is the standard affair of surprise attacks on both sides. Occasionally you will be ambushed by monsters and will be assaulted. Then randomly your party will gain initiative from an ambush and the tables will be turned. However more often than not there will be your standard battle and there will be many, many, many battles.

There are an extremely large amounts of random battles to say the least. You may be able to walk ten steps at a time and then encounter enemies, while other times you may begin fighting within four steps. Though this was the standard for RPGs in the past and any retro gamer will know what to expect when they purchase the game. However if you are new to Final Fantasy then be prepared for many battles which have grown only more slow paced due to the iPhone/iTouch user interface. 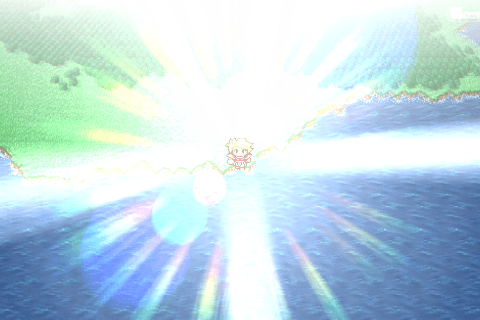 During battle all actions are controlled via the attack, magic, defend, item, equipment, escape buttons on the bottom of the screen next to your characters’ names. After selecting an action such as Attack, you have to also double tap the exact enemy that you wish to attack. This is all fine and good for longer battles and battles of your current level. However when you face enemies that are far below your level and are quite weak, it is faster to just run away then to waste your time tapping attack, tapping which enemy to attack, and then repeating four times at once.

The touch screen controls themselves however are very responsive. When traversing any map the directional pad which appears in the bottom left corner of the screen works the same as any real life d-pad would. However there is a small problem when it comes to talking to npcs, as the action button sometimes requires multiple presses to activate, as well as access the main menu. 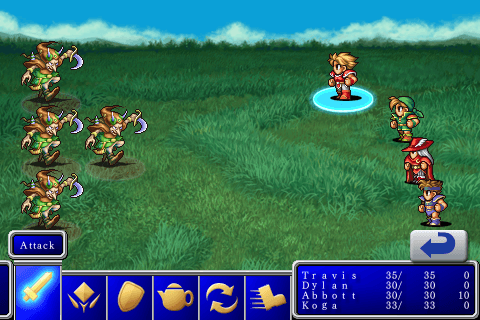 The NPCs also pose a small problem due to the fact that some cities have one square paths that sometimes an NPC will wander into this tight corridor and force you to wait until they have moved away. The worst case scenario was once two different NPCs were able to block my character in and force me to wait for three minutes for one to move just far enough out of the way to leave. This could have been easily resolved however if they allowed certain NPCs to be passable.

Graphics:
Out of everything that has been said about the game the strongest aspect is Final Fantasy I’s revamped graphics. Though the graphics are a direct copy from the PSP version of the game released back in 2007, it shares some extremely well drawn characters and monsters.

Character motion is fluid and each dungeon’s atmosphere is superb. Every inch of Final Fantasy I’s original graphics have been rebuilt from the ground up. Though the characters have had extreme face-lifts in terms of drawing, they are both easily recognizable and better than they were before. During battle is where the graphics truly shine as a full graphic presentation of each character and monster is visible. Magic spells of both White and Black magic have been completely redesigned and match their namesakes; lightning summoning devastating lightning bolts and protect forming a glowing barrier around whichever ally received said buff.

However outside of battle the world map itself contains aged visuals and in some situations brings the question as to what year the game itself was released. Not only this but some village design is unfortunately extremely poor. An unlucky player may find him/herself completely blocked into a city walkway by two NPCs that have wandered into the walkway. Ordinarily this would not be an issue, however in many cities there exists a few paths which contain only one walkable tile. With the NPC standing on this tile, there is unfortunately no way to move past them. 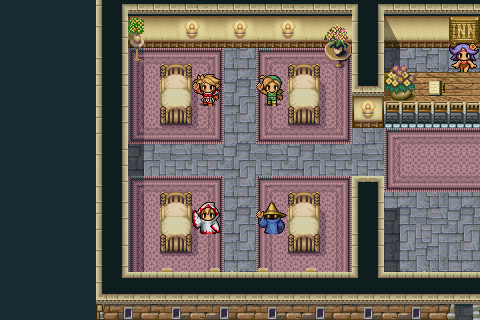 Overall:
Final Fantasy I is a great example of how RPGs used to be established in the years past. However there is a reason for restructuring and adjusted gameplay. But this title stands as one of the best retro RPG games available on the market today. Final Fantasy I for the iPhone/iTouch is a repackaging of the PSP remake, they have included a few extra dungeons, five to be exact. The Soul of Chaos pack and The Labyrinth of Time are the dungeons that have been added, which greatly extends the length of play. FFI does have some issues such as an extremely thin storyline and the ability to do quick battling would be a major improvement considering all the random battles which you will have happen to you.

I give Final Fantasy I for the iPhone/iTouch: