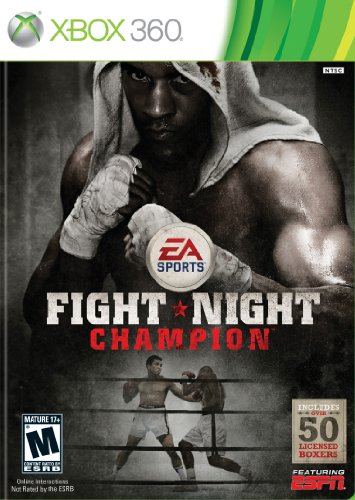 Overview:
Boxing draws upon the violent nature within all of us. Much like the gladiator battles of ancient Rome, minus the death of course, two men step into a ring and fight one another for money and fame. There have been more violent iterations of the sport such as MMA stepping up in the gaming market but there is still one franchise that has been around for years and that is the Fight Night franchise. With a few MMA games out and as the first ever M rated Fight Night game does Fight Night Champion do fans of the series proud?

Story:
Surprisingly, yes, there is a story mode to Fight Night Champion and it is called, not surprisingly, Champion Mode. This will be the very first mode you are introduced to as your game loads up for the first time and you are lying flat on your back in the middle of a ring in a prison boxing ring. You step into the boots of Andre Bishop and the very first time you see him he has seen better times.

The story then flashes back to the beginning of his career when Andre was nothing more than a rookie boxer trying to make his impact on the boxing scene and become recognized. The storyline is written by Will Rokos and his take on a boxer’s rise, fall and rebirth in the world of boxing is interesting to see and you will find yourself truly feeling for Andre as he tries to come back in a world that has left him behind and with the stigma of being an ex-con. 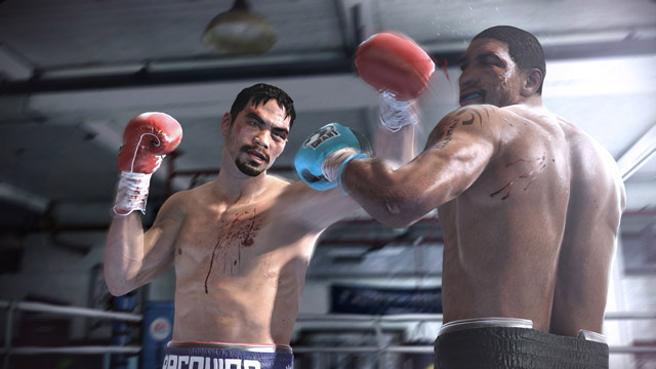 There are a number of gameplay situations that are directly linked to the story so I will discuss them here. A handful of the fights you will experience in Champion Mode will have a specific requirement or limitation due to story specific events. For example when you are fighting against an opponent with extremely powerful punches he opens up a serious cut on Andre’s eye during the start of the fight and you cannot avoid it and this places a specific limitation on the rest of the fight. Another such situation occurs when the game places you a few rounds into a match that has Andre break his right hand on the opponent and you take over after this happens forcing you to fight southpaw the rest of the fight.

These structured fights can become very annoying at times and may make you very frustrated, such as the fight with the cut eye. This particular fight may make you wish you had your own punching bag so your poor controller wouldn’t suffer a throw across the room. But despite the difficulty of some of these situations they do help flesh out an otherwise extremely short story mode. The Champion Mode will at most last four or five hours of playtime but can easily be completed in less than four hours. With zero choices to be made it also makes Champion Mode have nearly zero replayability.

Graphics:
The M rating of the game truly shines when you take a look at what has happened visually to Fight Night Champion. There are a number of improvements to the graphics of Fight Night Champion and they all add up to being some of the best boxing graphics I have ever seen. The fighters will sweat realistically and the way that their bodies and faces react to getting a fist placed where their eye should be is a sight to behold. Blood and cuts come back with a vengeance for being mostly left out of previous Fight Night games and are brutal to see, especially as your opponent’s blood even stains his briefs as it pours down his face and onto his chest.

The cutscenes for the Champion Mode also look good and help pull together the struggle of Andre Bishop by adding the appropriate emotional depth to the action. Fighters look superb and are easily recognizable to anyone who is a fan of boxing which shows how lifelike the 50+ fighters such as Muhammed Ali, Manny Pacquiao, George Foreman and Mike Tyson, look. 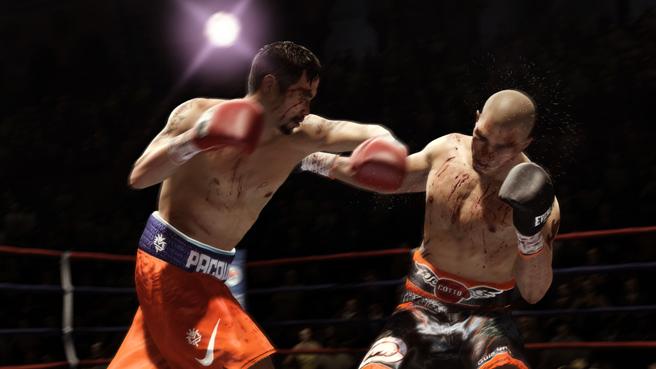 One thing that was problematic however was the fact that the now visual referee likes to be in the camera way too much. There are a number of times that the referee stepped right into the camera angle and my fighter had to endure a barrage of unseen punches until he moved or I forced the camera to move away. This problem is avoided by changing the camera angle but should not be an issue that forces players to change the options.

Audio:
Your blows land with a satisfyingly meaty smack against your opponent’s body and feel as realistic as you can make a punch sound. Also while EA has secured enough songs to provide a relatively interesting soundtrack players are able to assemble their own music playlists so even if the music they provided isn’t something you normally would listen to then you can change it at your leisure.

The voicework done in Champion Mode is suitable at best but doesn’t really stretch the bounds of acting. There are a number of times that boxing clichés were made worse due to the way the voice actors treated that specific scene. The obvious stars, and rightfully so, are Joe Tessitore and Teddy Atlas. They return to provide the play-by-play announcing of the action and will treat boxing fans to relatively accurate descriptions of what is happening in the ring, especially during Champion Mode when they elaborate on the specific situation that Andre currently finds himself in.

Gameplay:
Enough with the storylines and graphics, how about the actual meat and bones of the boxing you say? Well speaking of that the way that you throw your punches has seen a complete change. You are still able to use the four main face buttons to throw default left and right jabs/hooks depending on which one you press but now they have created an easy to use “Full Spectrum Punch Control” that is handled all by the right joystick. 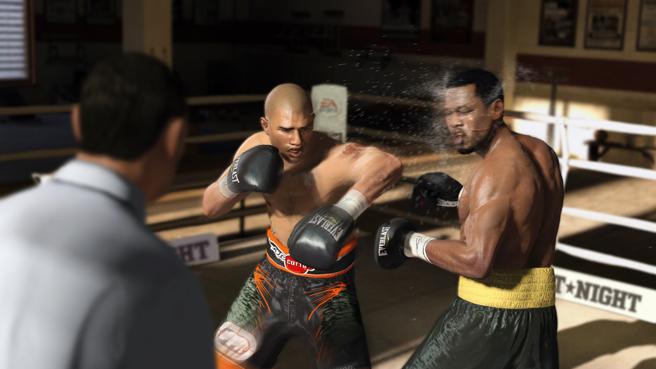 The “Full Spectrum Punch Control” is extremely fluid and allows players to string together powerful combo punches without the need for a specific and hard to input flicks of the stick. One thing that is noticeable that every time you flick the joystick in a certain direction, the game will always recognize it at least up to two swings ahead. Meaning if your fighter is swinging away with lefts and right jabs, and suddenly you switch it up to a few uppercuts they will play out exactly as you planned, but can leave you wide open for a devastating counter punch.

These counter punches can be avoided by the easy to use defense system which allows players to simply hold the RT down and block every attack coming their way regardless of whether it be a body blow or a blow to the face. Also you can use the LT to bob and weave your head and avoid a potential knockout blow and deliver your own by holding the right bumper and throwing a heavy punch which is another simplified game mechanic that allows players with easier entry to the game.

Other than the default exhibition mode there is also the Legacy Mode which allows players to create their very own boxer and train them from scratch. This is done through a variety of training modes which unfortunately are quite boring after a short period of time and only the most hardcore boxing fan will find themselves happy with this aspect of Legacy Mode. Also you are given a money system where you can earn money from winning fights and earning sponsorship with various boxing companies. You will then be able to use money to travel to other gyms around the world to gain access to better equipment. Unfortunately money feels tacked on to the whole experience and doesn’t expand the experience at all. 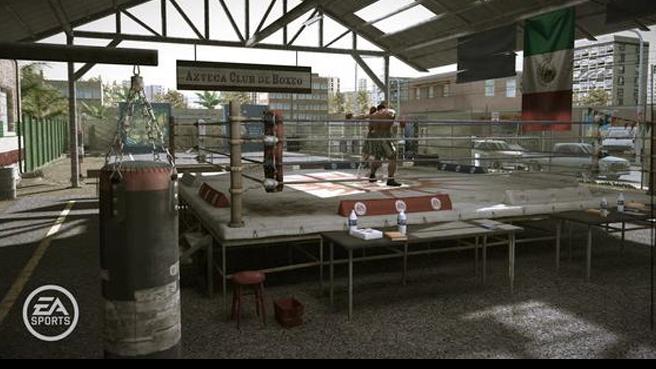 Unfortunately Legacy Mode still feels very lacking in the mode of inspiration. You do have the ability to create any fighter you want to and can bring them from a nobody to the most popular boxer in the entire world but still feels like a disappointment when you compare it to what it could have been. The best thing that could have happened for Legacy Mode would be to have it combined with Champion Mode but some fans may still find themselves loving Legacy Mode for what it is, a simulation of training a boxer.

Other than the single player modes there is also a variety of different options you can take to the internet via Online World Championship and Online Gyms. These modes allow you to enter with a group of other people in the same gym and interact with one another in tournaments or leagues. Of course all fights still happen one on one as simple boxing matches but it is a nice addition to what could otherwise have been basic matchmaking with ranking up.

Overall:
Fight Night Champion provides a few great updates to the series by improving the visual effects of the damage done by each fighter on one another and the improvement on the boxing mechanics with the Full Spectrum Punch Control.  Unfortunately Champion Mode shows what could have been a great story it is left to languish under difficult situations and a very quick finish to the whole thing. With Legacy Mode feeling like a shadow of Champion Mode there a truly great opportunity was lost in Fight Night Champion.

I give Fight Night Champion