One of the biggest sports franchises in gaming is quite arguably Fifa. Its quite well deserved, not only is the game itself an internationally renowned game, but the game itself is a fantastic representation of both the players and the game. So the question is, does this transfer onto the iOS?

The feel of Fifa is excellent. While there were some lag and smoothness issues in gameplay, they were few and far between. The amount of programming and intelligence that has gone into this game, the AIs, and physics, is fantastic. It’s no wonder that this app will consume a gigabyte of memory.

There are a few different gameplay modes for Fifa, Quick match, Manager career, and Daily Challenge (which is an Origin feature). There are five different difficulty settings ranging from beginner to world class, the game starts off automatically with beginner. I realised this when I was a few minutes into a match and I was up four-nil. I may be good, but I don’t know about that good. As well as this, you can adjust tackle assist, injuries, offsides, bookings, switching, handballs and manual ground pass. All of these excluding manual ground pass are automatically on, however if you want to play the dirtiest game ever just for fun then you can do so to your heart’s content. That being said, bookings are less common than in the console version, I was only called up a few times and they were for sliding from behind and pretty much bowling the player over and probably injuring him quite seriously. 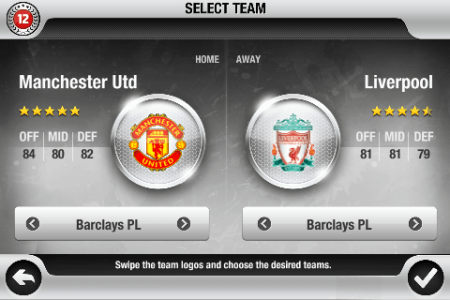 As per usual you adjust the amount of time each half will be, I went for three minutes and was quite happy with the timing of it. In one match (Manchester United vs Manchester City) I ended up tying with them by the end of the match and instead of being given a choice on how to proceed it immediately went to extra 15 minute (more like half a minute real time) halves. I was a bit stressed by that, especially since I scored a goal two seconds into the first half and then proceeded to have to hectically defend for the next minute, since it was a cup match. 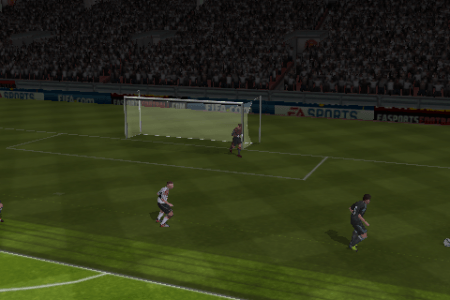 The controls are innovative, simple and fantastic. And this coming from someone who a year ago hated the way team sport games had about a million random combinations to use (although it never bothered me for arcade fighters funnily enough). There is a directional ‘joystick’ which is quite responsive (although you do need to be pre-emptive when sprinting, because it naturally gets less accurate), and there are three buttons. When you’re in attack they are Sprint, Pass and Shoot, in defence they are Sprint Tackle, Slide and Switch (player). In order to make variations on these (i.e. Chip Shot) you slide your finger up. To do tricks to fend off defenders you simply tap the screen twice while running. Passing when you’re taking a corner or a penalty shot is incredibly easy, you just tap the player you want to pass too and there it goes. The simplicity is beautiful and works fantastically, everything is right there for you to manoeuvre your thumb into place quickly and simply. 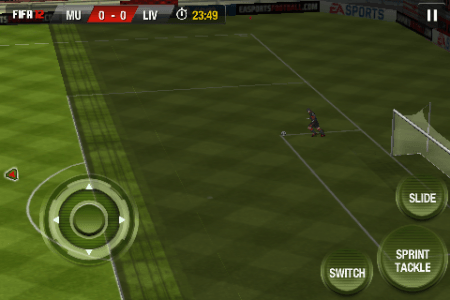 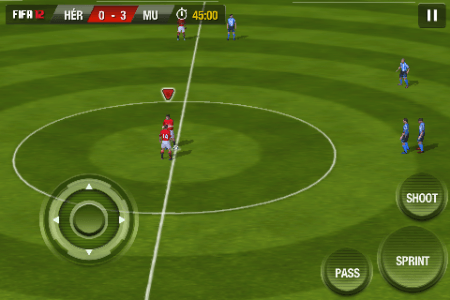 That being said, the game itself does have some issues. Namely, defending is a pain. While your attackers sprint to their hearts content and outrun the defenders easily, your defenders can’t sprint. Sprint tackle just keeps you on the opposition’s tail, it doesn’t give you an faster running pace to come around them. Also, your team’s AIs seem to just stand around, they don’t defend at all if you aren’t controlling them. They’ll just stand near the attacking person as they enter the goal square, as if to say ‘I see you! Not gonna do anything about it, but I’m just letting you know I’m here!’ This is not a big surprise since it is an app version of the game and having intelligent AIs probably lost precedence over, say, realistic physics, but it was annoying knowing that once the opposition had the ball in your half you were pretty much on your own. The goalie is great though, and where my defence AIs failed, he shone. 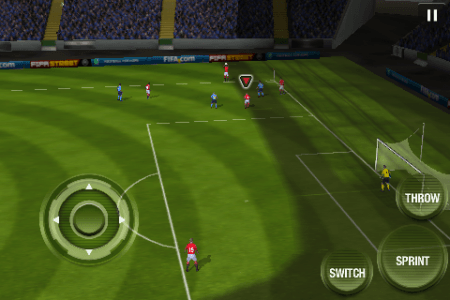 I played in career mode as Man U (cos I can) and found it to be quite impressive. Manager mode is the main new development and draw of Fifa 12 on iOS, and I can certainly see why. You’re in charge of everything, training, contracts, renewal, organising your players, everything. And the fun of the Board. Oh the Board. 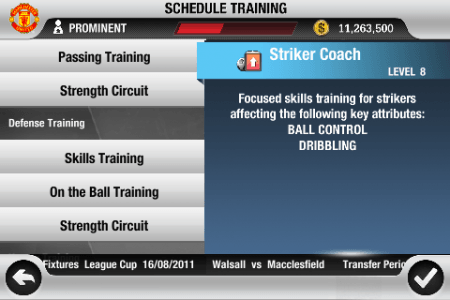 The bane of my existence in this game was not the lack of AI defence, it wasn’t the fact that the soundtrack is really odd, it was the Board. The Board basically controls your decisions, they have things that they want you to do (such as renew certain player’s contracts, win things, beat a rival team) and if you don’t do exactly what they say they get very cranky. At one point I had been winning a huge amount of games to receive only a tepid congratulations, and when I started renewing the contracts of players that were expiring at the end of the season they sent me a message telling me to stop wasting their time and money. The Board provides goals for you to aim towards which is good, but they also make you hate them terribly.

Overall, it is a fantastic looking game and one of the best on the iOS. While the graphics don’t rival the console versions, I’d say they’re about as good as earlier Fifa versions on console. Close ups on players show that they’re sort of representations of themselves but not super accurate ones, but the pitch and look of the stadiums are great.

During matches it’s the standard commentary that isn’t quite as unique and responsive as the console version, but again that’s to be expected and it does stand up really well anyway. However, the music behind the menu is unbelievably annoying and bad. Usually I like Fifa’s soundtrack but this one seemed to deviate completely from their usual selection and (not to insult the person in charge of music) was bad. It didn’t suit the game, the sort of mood you should be in when playing Fifa, and just detracted from an otherwise pretty menu screen.

Fifa 12 is a great looking game and on iOS it is definitely the best out there. There are faults to the game, but that’s more to do with the limitations on the system and personal preference, than a comment on the game itself. A definite must buy.

I give Fifa Soccer 12