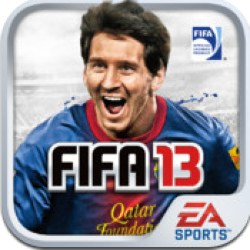 Another year and another football season rolls around. With it comes the obligatory, hugely successful release of a new FIFA game… but we can’t always be home on our consoles, enjoying the fine new entry in the series. In comes FIFA 13 for iOS, for all your portable football needs! Is this soccer sim on par with its console cousin, or does it belong in the heap of app store trash? 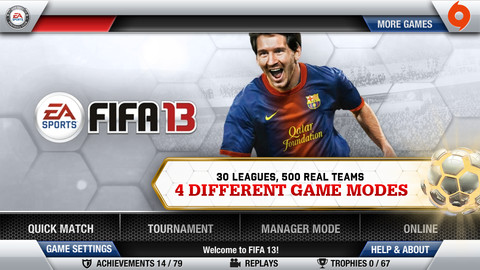 If you played FIFA 12 on iOS, then what you’re getting is essentially the same thing, but with a slick coat of polish in this year’s entry. That’s not to say there’s been no changes, but they are fairly few and far between. Oh, and if you’re expecting a direct port from the console versions to your mobile, turn away now. There’s no Matchday, Player Impact Engine, or any of that forward-thinking nonsense here. In fact, if anything, FIFA 13 on iOS really reminds me of FIFA 07 on Xbox.

In case you were confused, when I said “nonsense” above, I meant really cool stuff. At least some of which should be imported to the mobile version of the game. I mean, how hard could it really be to replicate Matchday and add in player form to the game’s online component? 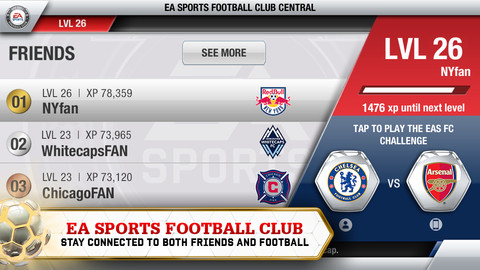 What you get on your iDevice is a bare bones version of FIFA, and if you’re playing on a device that’s not the iPad, expect the control buttons to take up a lot of the real estate on screen. For all their clunkiness, the way the individual buttons are used to perform various actions is quite creative: holding the pass button down will turn a simple pass into a lobbed ball, swiping up on the shoot button will initiate a chipped shot, and you’ll perform more and more of these specialized moves as you familiarize with the controls. However, the most effective way to score does seem to be to just pound a shot in from just outside the box, as goalkeepers in the game are fairly… erm.. bad.

So that’s much the same as in FIFA 12’s iOS iteration. A new skill moves control button has been added to allow your players to perform special tricks, like nifty turns, fake-outs, etc. To be honest, it’s a rather useless addition as the player movements are fairly clunky (with a virtual analogue stick how could they not be?) and as such, all but the simplest of tricks have very little practical application. You won’t be scoring with rabonas or volleying rainbow flicks with any regularity. 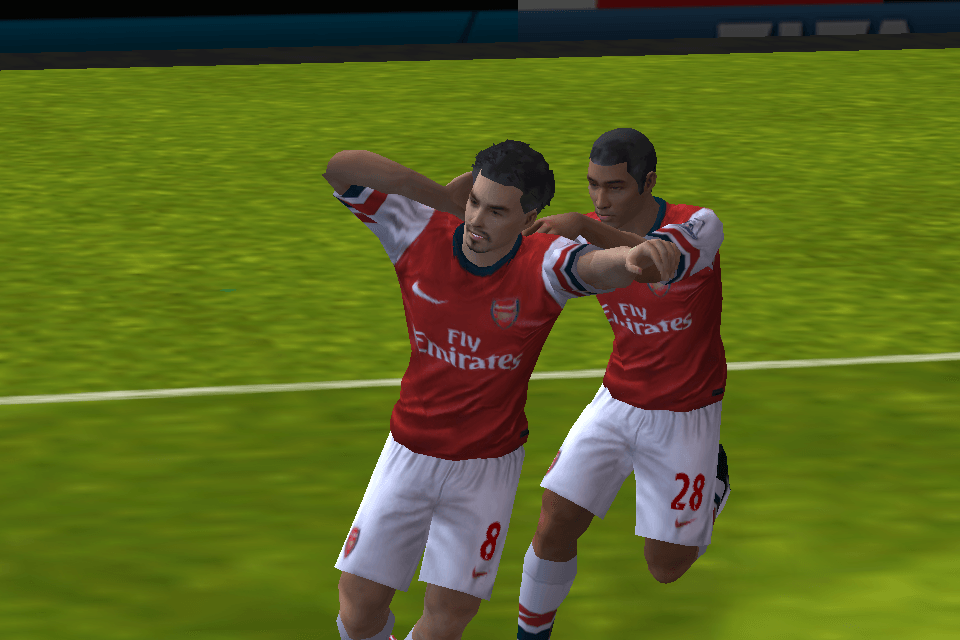 Career mode is very reminiscent of the older FIFAs. At the start of the season you choose a season-long sponsor who funds you based on your performances, and your aim is finish the season with a positive bank account balance, while at the same time trying to improve your trainers, stadium, and brining in talent from other clubs. You then proceed through the fixtures of the season in whatever League you’ve chosen. Oddly, in my review build, the EPL 2012/13 season did not actually reflect real-life fixtures, which kind of broke the illusion. That being said, Career mode, though not utterly different from last year’s iteration, is much easier to navigate as the UI in between matches has been much improved. Everything is neatly organized, and you’ll have no trouble working on your starting 11, improving your club’s facilities, working out the financials, or navigating between your scouts, transfer prospects, and youth players.

Essentially, FIFA 13 on iOS is FIFA 12 on iOS with a brand new coat of varnish. It’s a slicker, easier-to-use experience, but at its core it remains very much the same, which isn’t horrible. However, if you go in expecting “precision controls” (as touted on the game’s entry on the App Store), you’ll be fairly disappointed. The basic gameplay shares it all with FIFA 12: it’s a solid soccer experience on a portable device, but it does not come even close to a sim. Consider it more like the console FIFA’s aracade-y cousin that has some fairly regular control issues. 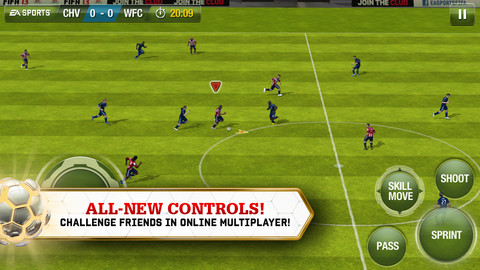 Visually, FIFA 13 doesn’t look much better than FIFA 12 did, and to be honest, that was pretty bad to begin with. What’s extremely odd is how some players will looks remarkably like their real counterparts, while others may well be another person altogether. Take Arsenal’s Olivier Giroud and Mikel Arteta sporting a moustaches in-game, whereas they have never actually had them in real life.

On top of that, games like Infinity Blade have shown us all how good games can look on iOS platforms, and FIFA 13’s stadiums are far less expansive environments than anything in that game. I’d much rather play a FIFA with a slightly stylized art style if it means I don’t have to look at another blocky, sameish-looking character again. I’m not saying I expect FIFA to look like Infinity Blade, that’s asking a bit much, but surely the developers could have squeezed out a bit more out of the processing power of the various iDevices. 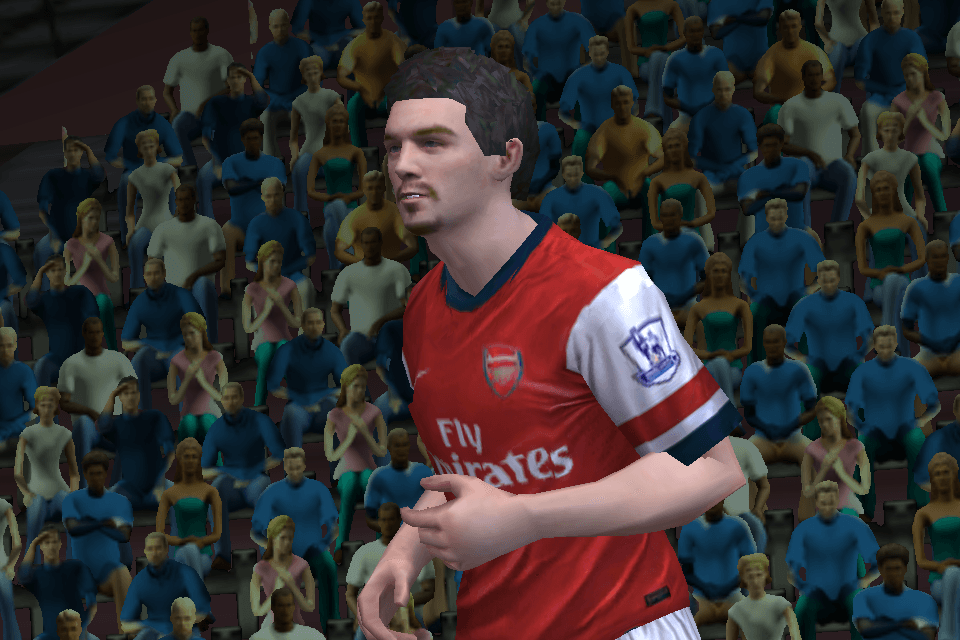 The game’s sound design features much better. The soundtrack is thankfully relatively dubstep free, and is actually quite spectacular. I’d be remiss if I didn’t mention that many of the songs now feature on my workout mix. The sounds of the ball being hit don’t sound all that great, in fact they’re fairly unrealistic, but everything else in-match is fairly solid. Crowd chants in particular ring out clearly and the commentary is crisp and clear, if a bit repetitive.

Altogether, FIFA 13 is not a bad experience. I hate to trash the game’s control because the developers are really doing their best on a platform which really doesn’t lend itself well to precision, but be warned: if you expect a realistic soccer simulation on your phone, then this will be as close as you get, but it sure ain’t great. Maybe it’s time the iOS FIFA team simply dropped the moniker of football sim on the portable and went for a more arcade-like experience in all aspects of the game (including visual presentation). That direction would lend itself very well to the platform, and the little things that just don’t fly at the moment would be fairly easy to gloss over.