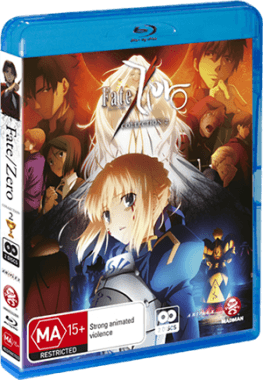 Overview
Originally written as a set of light novels by Gen Urobuchi, Fate/Zero is a prequel series to Type-Moon’s visual novel Fate/Stay Night. With the change in author and animation handled by ufotable, the result was a darker and more serious take without the fun harem elements of Fate/Stay Night which was made within the confines of an eroge game.

The first half was excellent, with plenty of suspense and a few intense encounters between the Masters and Servants of the 4th Holy Grail War. We were left on the verge of a climactic battle that saw Saber, Rider and Lancer team up to defeat an out of control Caster. With much of the story yet to be told, how does Collection 2 fare in concluding this grim epic? 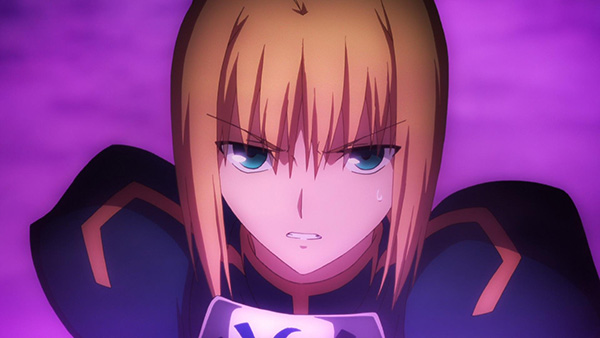 Story
Fate/Zero follows seven Masters, mages chosen to fight in the Holy Grail War, and their Servants, heroes summoned from history and legend, as they fight to the last man standing until a winner claims a wish that can be granted by the Grail. At the conclusion of the first half, only one Servant is dead. That means a lot of stuff has to happen in the second half, and viewers will not be disappointed with the crazy flow of events here. Mentioning them here would count as spoilers so you would have to take my word for it, Collection 2 of this anime is intense.

There is plenty to absorb from the narrative of Fate/Zero, particularly in this second half. Kiritsugu Emiya continues his ruthless crusade to obtain the Grail for the good of the world, as he sees it. His ideals clash with his Servant Saber, who is essentially a polar opposite, more than ever. Each Servant and Master is dealt with as an individual. Their goals and hopes unravel one by one, whether by deceit or by harsh reality, and the result is either glory or despair. 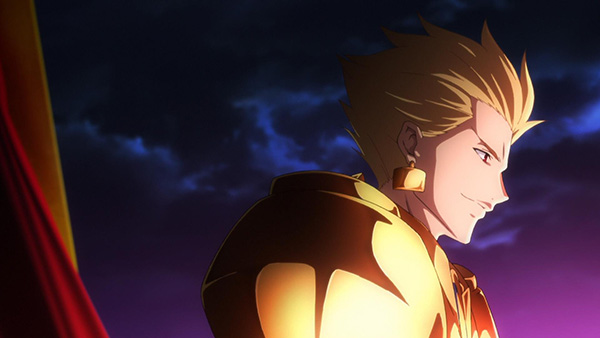 Viewers learn a heck of a lot more from the characters such as each Servant’s past and their reasons for wanting the Grail. You’ll see just how wildly different these personalities are, whether it’s Kirei’s complex, evil nature or Rider’s simple yet heartwarming relationship with Waver. We also get a whole two episodes of Kiritsugu’s tumultuous past. These flashback episodes are a dramatic shift from the usual fare, offering a rare, gritty and realistic look at the Fate universe and revealing how Saber’s Master became the man that he is.

Aside from the gripping narrative and fascinating characters, there are some heavy themes running throughout Fate/Zero. Through Kiritsugu, we learn that to be a true hero means giving up part of your humanity. That to save one means to sacrifice another. While it’s a sombre message, hope is alluded to in the last episode where we are introduced to Shirou Emiya and are led to the beginning of Fate/Stay Night. 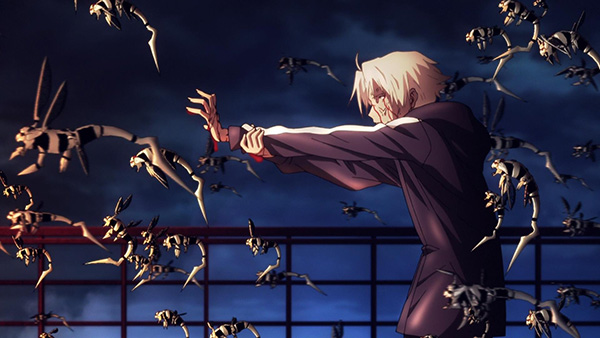 It’s safe to say that the second half of Fate/Zero is a much darker and action-packed affair than the first. Urobuchi lives up to his name as characters start dropping like flies and the true face of the Holy Grail, first revealed in Fate/Stay Night’s Heaven’s Feel route, rears over a shocking ending. If you don’t know the source material there are plenty of surprises and plot twists to enjoy.

Unfortunately Fate/Zero is not without its issues. The second half falls foul of bizarre pacing issues due to the allocation of two precious episodes to what’s merely a flashback. This forced the studio to rush the final confrontation and even omit some minor, but important, details throughout the show.

Visuals
Once again ufotable nails the animation department with feature-film-like quality packed into every episode. Characters are splendidly drawn and the battle scenes look simply fantastic. It’s not quite at the level of ufotable’s previous work The Garden of Sinners, where the art and atmosphere is pretty much perfect, but it’s still up there among the best.

There are fewer quality drops than the first half, too. Huge discrepancies like in episode 11 are nowhere to be found here but it’s worth noting that the Blu-Ray/DVD release have been touched up in comparison with the original Japanese TV aired episodes. If you love high-quality visuals with ridiculous production values, Fate/Zero will definitely spoil you. 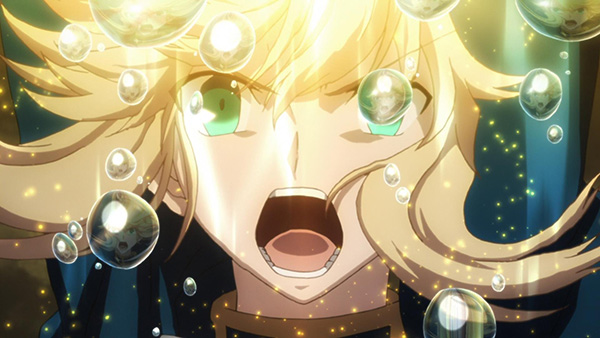 Audio
Yuki Kajiura’s beautiful score continues to sweep you off your feet in Collection 2, with new and even more exciting compositions featured. Her melodies are definitely one of the more memorable aspects of Fate/Zero. Kalafina returns once again with the emotional “To the Beginning”, the new opening theme while Haruna Luna lends her voice for the poignant “Sora wa Takaku, Kaze wa Utau” as the ending theme.

Both are a dramatic shift from the more upbeat songs we heard in the first half, mirroring how dark the second half really is. The voice actors also turn it up a notch, as the script becomes more emotional and, at times, hysterical. Again, most of the English cast perform amicably with only a couple of voice actors sounding out of place in their roles. 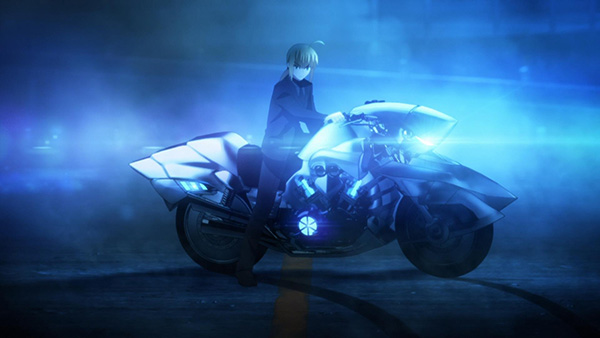 Extras
Fate/Zero Collection 2 is a standard release which offers the second opening and ending themes in textless form.

Overall
It’s little wonder why so many fans are waiting with bated breath for ufotable’s next big project; an adaptation of the original Fate/Stay Night. The magic of Type-Moon seems to run through the studio’s blood as Fate/Zero is ultimately a winner. Incredibly strong character interaction, meaningful dialogue and decisive battles. It’s as visually impressive as it’s emotionally powerful.

Collection 2 features more action and more plot than the first half, with events happening quickly and with serious impact. As mentioned above it is, however, a little rushed at the end. Whether it’s due to time restrictions or poor foresight from the team, the anime stumbles in its pacing especially during episode 24. But despite this it still manages to be damn good and you’ll be left thinking about it long after the final credits.