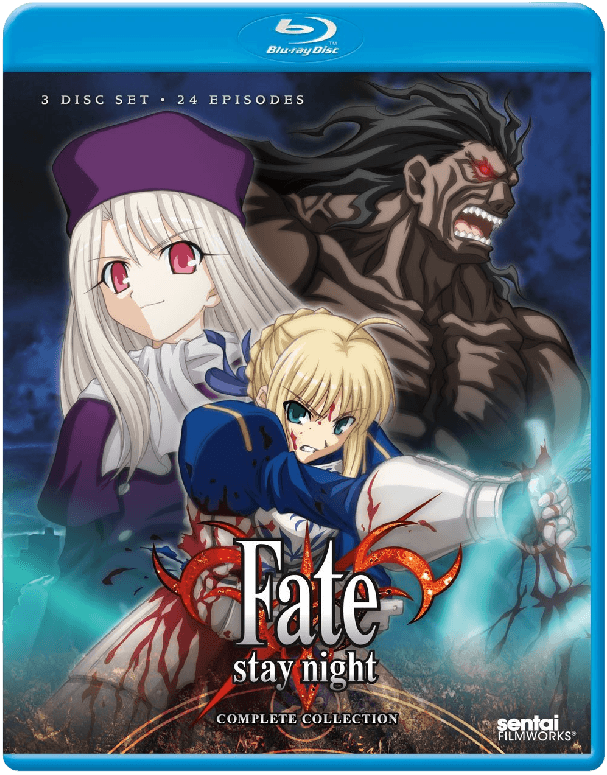 Overview
Type-Moon’s Fate franchise is one that is well known as it spans across a number of popular visual novels and has been given various anime adaptations and spin-offs. As such it is difficult to imagine that Fate/Stay Night, the first anime adaptation for the franchise, would change hands numerous times in North America before being abandoned completely. Now with Sentai Filmworks picking the license up and releasing the entire Fate/Stay Night series in one collection, does the series still hold up today?

Story
In the world of Fate/Stay Night a periodic contest is held between seven randomly selected Magus who must take part in a free-for-all battle called the Grail War. These seven Magus must summon Servants to fight for them and the Magus left standing with their Servant is rewarded with the Holy Grail that will grant them any wish of their choosing. Each Servant is a hero from the past or a historical figure and while there are seven in total, each one fills a specific role and title. 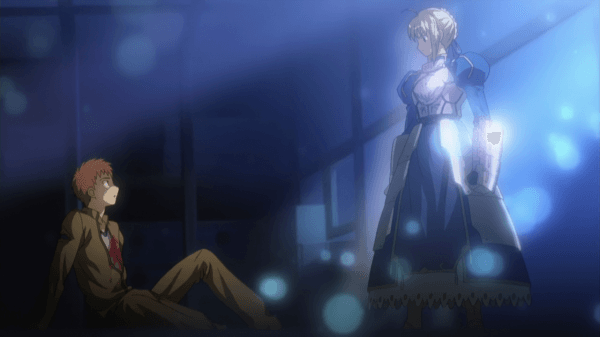 Archer, Assassin, Berserker, Caster, Lancer, Rider, and Saber all must fight one another at their Masters’ behest in order to obtain their wish. With each Servant having a unique specialization as well as a Noble Phantasm trump card that is as flashy as it is powerful, the Masters must choose their fights carefully, especially since if a Master is defeated, their Servant will also suffer the same fate.

The story takes place in a world where the last Grail War occurred only ten years prior and follows Shiro Emiya, a boy raised by a retired Magus named Kiritsugu after his parents were killed in a massive fire that devastated the city. Despite being raised by a Magus, Shiro only has a basic understanding of magic as Kiritsugu avoided passing any talents down to him. However when Shiro finds himself watching a battle between two magical fighters wielding weapons, he is at a severe disadvantage. 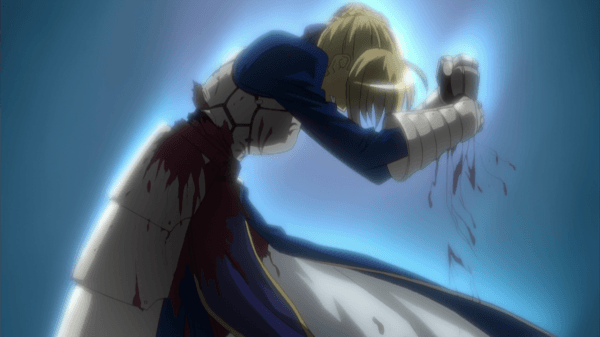 Despite doing his best to run away, Shiro finds himself mortally wounded by one of these fighters only to be saved by a fellow classmate. From here Shiro manages to accidentally summon one of the strongest Servants, Saber, to fight for him and protect him. Thanks to Shiro’s somewhat chauvinistic personality however he finds himself at odds with Saber as she constantly throws herself into danger to protect him.

After learning the rules, Shiro decides to take part in the Grail War to prevent anyone with evil intentions from using the Holy Grail. This immediately makes him an enemy of the other Masters, but he soon finds himself allied with his fellow classmate Rin Tohsaka and her Servant Archer who begin to teach him what it means to take part in a war that will see Saber and Shiro fighting against powerful opponents in order to obtain the Grail. 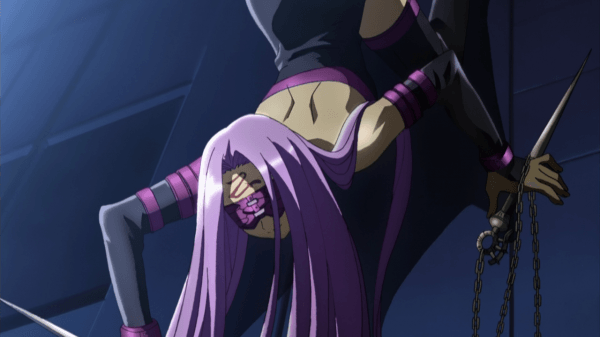 Fate/Stay Night tells the first story route from the original visual novel and it unfortunately struggles to get out of the gate because of the way the adaptation is handled. There are numerous rules and intricacies to the Grail War and the relationships between Master and Servant that are explained over the course of the first half of the series that do a great job establishing the setting and the basis for the battles that will come. However thanks to that, the series is extremely slow going as the few battles that do take place near the beginning are nothing more than simple skirmishes.

Thankfully the action does pick up after the midway point of the series as numerous important battles take place with costly stakes. One thing that is nice here is that the build-up of the main characters over the course of the series up until this point is exhibited in these fights, as Rin, Shiro, Archer, and of course Saber all take part in fights here, leaving only certain side characters to remain as less pertinent roles until a couple of twists are thrown into the story. 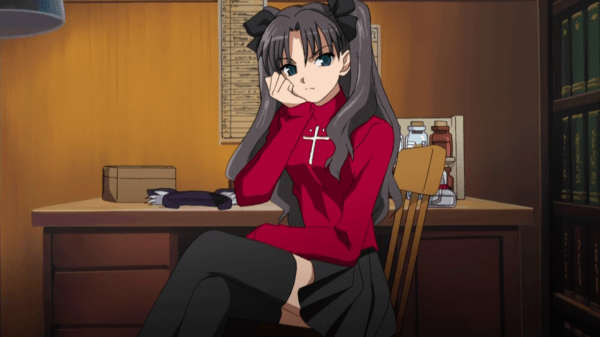 Another place where Fate/Stay Night shows its visual novel origins is with the way it handles its character developments and various interactions. Shiro is quite dense but does his best to try and be heroic but as mentioned before, he finds himself struggling with Saber who he wishes to protect despite the armor clad woman being able to fight foes on a completely different level from him. While his starting interactions with her may be annoying, it does make his development over the course of the series interesting to watch as we see Shiro begin to fall in love with Saber and even Saber start to show her knowledge of these feelings.

That being said, there is a bit of a harem feel to Fate/Stay Night thanks to how many members of the female cast begin to gather around Shiro. From the attractive and competent Rin allying herself with Shiro and teaching him the basics while living in his house to the younger Illyasviel switching from being a sadistic Master to one willing to cutely cling to Shiro there are many elements here that could easily lead to such a development. 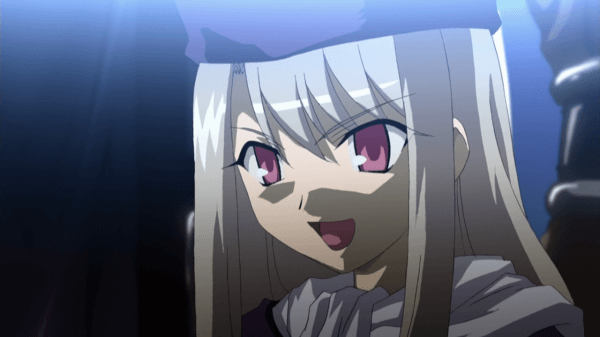 Thankfully for the case of the story, these elements are simply there to provide viewers some satisfying slice of life character interactions in order to break up the action sequences and instead the story chooses to focus on Saber and Shiro’s developments. Now while some certain events that take place near the end of the series, especially considering the motivations of some of the final opponents that appear, fall flat, Fate/Stay Night tells a satisfying story with a bittersweet ending.

Visuals
Now although Sentai Filmworks is releasing Fate/Stay Night on Blu-ray, it is worth noting that this series was first created back in 2006 by Studio Deen and unfortunately it has not aged well. In fact it almost seems like the upgrade to Blu-ray has made some of the flaws in the animation and character designs more prominent. This is due to the fact that while the characters designs are well known and certain ones really do stand out from the crowd, especially in the case of the Servants with Rider, Saber, and Archer standing out as the best examples, there is unfortunately a lack of detail to facial design and even the eyes of these characters appear lifeless more often than not. 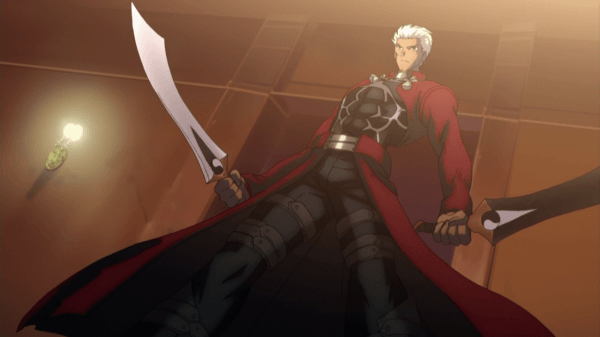 This animation issue continues into the battles where there are extremely obvious looking shortcuts used to try and make these sequences look fluid but generally only result in looking foolish. There is a sense of style used with plenty of flashy attacks but unfortunately many of these scenes will be found lacking. As far as graphic violence is concerned, Fate/Stay Night keeps things relatively tame with only a decent amount of blood shed and no actual gore. The same can be said about the fan service which, outside of a few specific character designs, is extremely tame considering the source material. 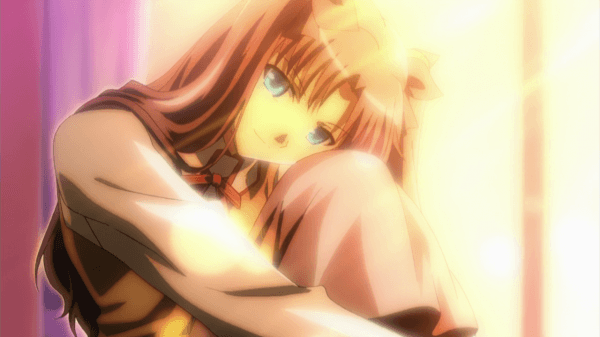 The background music in Fate/Stay Night has some fitting dramatic numbers that help make the action sequences appear more epic but unfortunately these are the only times that the soundtrack really stands out. The opening themes “disillusion” and “Kirameku Namida wa Hoshi ni” by Tainaka Sachi are fitting enough but the ending sequences are unimaginative and bland.

Extras
This release of Fate/Stay Night comes with zero noteworthy extra features. In fact the only extras contained on the discs are disc credits and trailers for other Sentai Filmworks releases.

Overall
The Fate/Stay Night: Complete Collection manages to tell an relatively enjoyable storyline that is slightly marred thanks to a slow starting story, a few lackluster twists near the end, and some character issues. Plus, while this may be the best way to experience the original series, it hasn’t aged very well and even a new Blu-ray sheen cannot cover it up. That being said, Fate/Stay Night is still a series filled with intricate rules and some nice action sequences that may be worth watching, but one cannot help but feel like the series could have been so much more.