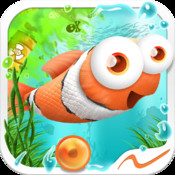 Honestly it’s starting to feel like exactly 50% of the app store is nothing but endless runner-type games these days, which can be both a gift and a curse for developers. On one hand competition is fierce and a game can be easily lost within an endless sea of titles that play very similarly, but on the other hand this encourages creativity and innovation in order to stand out. While this has led to some awesome games that involve a lot of creativity, most end up as terrible cash-ins or not even worth your time. Think I was just cramming in a lot of links into that sentence? Those are just some of the examples of endless runner titles I’ve reviewed this year I can remember off the top of my head. That doesn’t count many others, regardless of how terrible or successful they may be throughout 2013, and don’t get me started on that awful Iron Man 3 cash-in despite what other people may think. Now don’t get me wrong I love these type of games, Temple Run 2 was my favourite mobile game of 2012, and Jetpack Joyride was easily one of my favourites in 2011. What I’m getting at is to stand out of the crowd in this genre you need to be filled with creativity and character, both of which Fast Fin is seriously lacking. 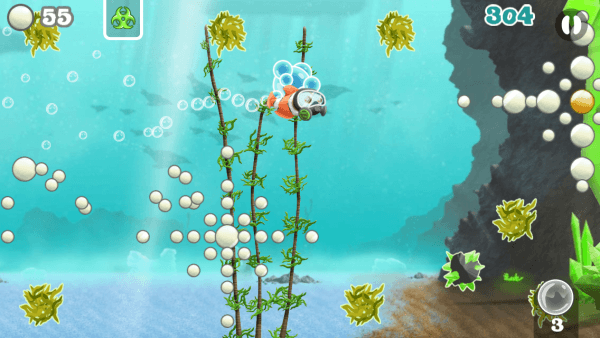 If you’ve played a side-scrolling endless runner you’ll know exactly what you’re in for. Players control a character who is constantly moving forward and you must dodge obstacles along the way while collecting collectables and powers ups which can also be upgraded in the store in between levels. If you’re lacking in funds, you can gain more currency through challenges and in-app purchases as well. In the case of Fast Fin, you control a fish as it swims through the ocean, if you’re too slow you’ll be killed by toxic waste. The trick for controls here is that besides always moving forward our fishy protagonist is always moving upwards, so by tapping on the screen he’ll move downwards. Both a story mode which contains nine stages and also a survival mode are present, as well as daily rewards for playing, and that pretty much sums up the entire game. There’s no core gimmick or attempt to make the gameplay any different from other titles, and there isn’t really any challenge until the later levels. While the generic core gameplay elements are there and solid, there isn’t any fun to be found as the developer hasn’t even attempted to do much to keep players interested. Honestly the only real positive things I can say about it is that the game hasn’t crashed on me or showed any signs of bugs. 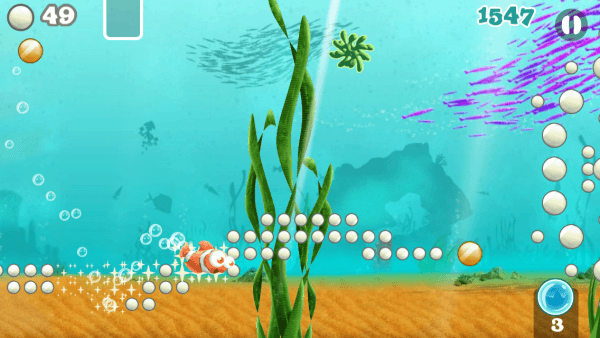 Visuals are yet another missed opportunity as ocean life looks incredibly lifeless. Animations usually involve little to no movement and rely on mostly static images. The toxic waste that is chasing you is static along with a toxic barrel which is also still, and schools of fish in the background are motionless as well. If it wasn’t for the protagonist being a fish and a few reminders here-and-there, you wouldn’t even know this game takes place in the ocean. Colours are vibrant and character design is ok, but none of that really matters when everything sits so perfectly still. If I was playing this on a Gameboy Colour it’d be acceptable, but on an iPhone 5 it feels like a joke. What good is Retina Display if the pictures barely move? Furthermore audio is also a disappointment, with generic trumpet music on an annoying loop that doesn’t even seem to match the mood of the game. It sounds like the atmosphere for a marching band in a parade, not like a fish swimming away for it’s life and trying to save it’s missing eggs. It appears Nurogames have decided to go for the bare minimum once again. 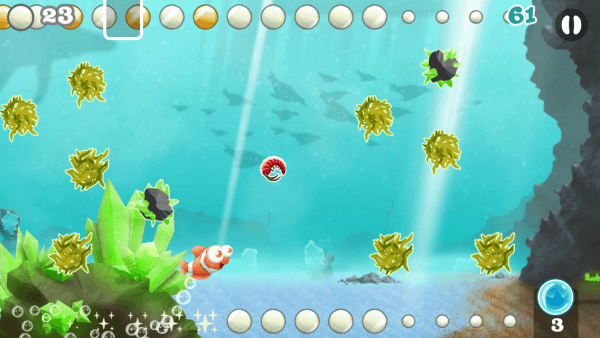 Fast Fin feels like a rushed title that has had little-to-no effort put into it. The game is solid but lacks any form of originality or creativity, as if the developer has purposely tried to make the most generic endless runner possible. Animations are almost non-existent and gameplay is incredibly basic. What’s upsetting is that Nurogames seem like they have the potential to develop some quality titles but with this one it’s like they didn’t even want to try. Better luck next time guys.