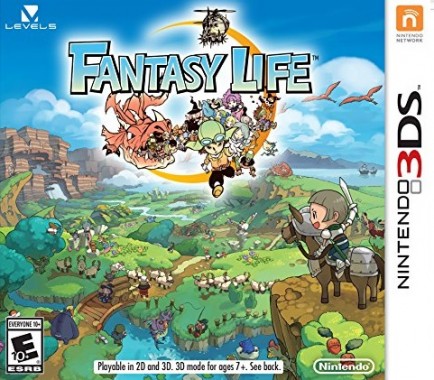 Overview
If anyone knows how to craft a portable experience, Level-5 do. The developer has brought us some of the most enjoyable gems during the past twenty years, with the likes of Professor Layton and the often forgotten about but still loved Dark Cloud. Yes, we know that quality will be a given with the likes of Fantasy Life, as it has the brand to back it. The only personal qualm I had going in was a bit of burn-out on the genre. Sure, I loved Animal Crossing through and through, and still play it, Tomadachi, and even that Disney sim game, but the question is, are we becoming over-saturated on the 3DS with these titles? Better yet, can Fantasy Life draw in an audience for another go as we live twelve lives in one setting? Let’s find out.

Story
The narrative in Fantasy Life is really not the draw. I know I am stating this early, but it is kind of important going in to this experience to know that while charming, the main plot is a bit forgettable and almost typical of your standard RPG. You have a butterfly sidekick of sorts and are out to save the world. Sure, there is more to it than that, but the “main plot” isn’t that important. What is important is the world of Reveria. Every little city or town you travel to has a ton of NPCs, and they are definitely wordy. Sometimes, this can be a curse in a game as its easy to want to tap A and just move forward. Fantasy life is a bit different however, as no matter how long you play, its almost a reward to get to go back and socialize as the writing is quick and clever, full of humor and heart. 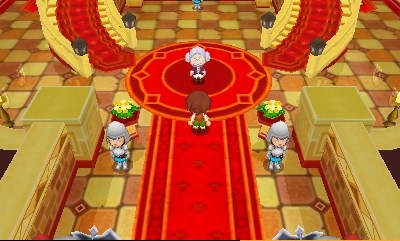 Every quest comes with more interaction than one can ask for, and while you will be walking back and forth, its usually a treat to speak to each humble resident, no matter what the task at hand is. Sure, you will enjoy the little story intertwined within this otherwise massive (albeit repetitive) world, but its the side quests – or the “little things” so to speak that stack up and make this title truly worth diving into.

Gameplay
I kind twisted the truth when I threw out comparisons to Animal Crossing with Fantasy Life, as aside from the basic control scheme, the two titles are completely different. While it could be considered to be somewhat of a simulation experience, this title is at its core an RPG, and even has an MMO vibe running with it. The main reason I used Animal Crossing is that it is that kind of a game where you live a different life – and get sucked into one experience for hours at a time. Starting out, the player goes through what is honestly a decent amount of customization as they design their character, where they then will select a class. No matter what choice you make, nothing is permanent in terms of job, as the twelve given within Fantasy Life give it a distinct feel, unlike most titles on the market. 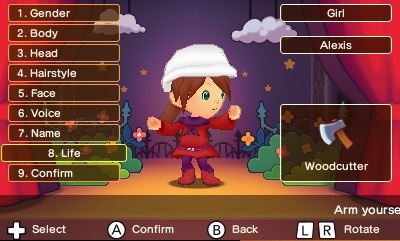 Sure, we have seen titles that have had swappable classes before, but Fantasy Life does one better and provides classes that compliment each other. Want to be a fisherman? Well, you can, but you can also level up a chef alongside of that, so you can cook your catch and create a tasty meal. Players can also become a Paladin, Hunter, Wizard, Wood Cutter, or one of a good number of other lives, and each comes with an almost urgent need to level up the next so you can get the most out of the world around you. Since your traits are able to be carried over, no talent obtained really goes to waste, making the time you play with each valuable in its own way. Switching is easy, but you must be in a city and not in the middle of a story segment or quest, which makes sense. 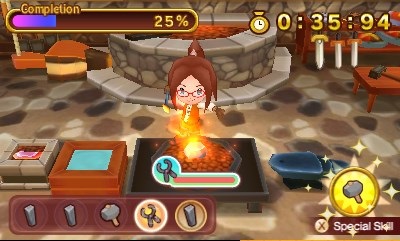 By doing tasks, whether unique to your own class or not – the player will earn stars that ultimately level you up. Its a long road to the next rank as you progress, but there is a lot to do along the journey there. Players can go on quests and battle monsters, or simply craft and collect – depending on their current preference. I personally started out as a chef first, which has the player take part in little rhythm and timing influenced mini-games. Sure, these little romps are not that entertaining, but considering the amount of times you will be doing them – it certainly could be worse. The combat, no matter what class is also a bit basic and never really feels too exciting either, which kind of comes off as a disappointment as again- this is a game that has a lot of repetition. Don’t get me wrong, nothing is broken with the gameplay within fantasy life, as whatever class you are, you will be able to complete your tasks. However, you will just be doing the sames things over and over so much that the grind starts to feel tiresome hours in. 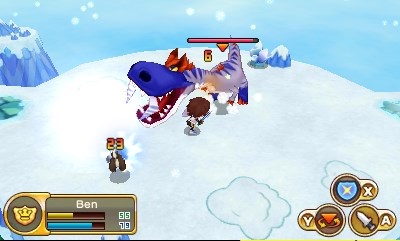 To elevate that feeling of monotony, Fantasy Life celebrates the player for everything they participate in. There are a ton of items to collect, and many are only obtainable by passing certain feats within the game. The grind is worth it for the most part as no matter the chore, there is usually a great feeling of accomplishment that Level-5 have packed into the charming center of Fantasy Life, and while it may be easy to lose interest and start a new life, there is no punishment for that – which gives the player the power to ultimately control their enjoyment of the overall experience. Multiplayer also adds a good deal as well, as players can go into battles (or other tasks) with a friend, and even choose AI partners if need be, who actually seem to be quite competent for the most part.

Visuals and Audio
Visually, Fantasy Life is lovely as it shines with its bright colors and adorable little character designs. I have used the word “charming” a lot in this review, but the art style shares the same word as its hard not to put on an instant smile just by watching the chipper animations and life in general that Reveria has to offer. There is also a lot of detail within the environment as well, which is a big positive as in my opinion, a lot of titles such as Rune Factory and even Animal Crossing never try to jump above their simplistic aesthetic, while Fantasy Life seems to be just as detailed graphically as it is with its dialogue. 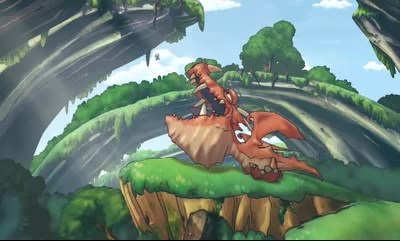 I’ll admit that while I liked the soundtrack, it never really provided a lot of earworms or songs that I would hum along with. Its forgivable for the most part as the music is pleasant, just not that memorable. For some reason, I enjoyed the little sound effects much more and began to appreciate the pitter-patter of footsteps and the sound of a fishing line hitting water. Those little things do a lot to give off an atmosphere that is easy to get lost in, and for a time consuming game like Fantasy Life, that is a great thing to provide the player.

Overall
Fantasy Life is not like Pokemon, nor Animal Crossing or Rune Factory. Its closest in kin comes in the form of an MMO, and while it lacks a lot of the depth, it does more than its part to create an addicting and delightful experience for those who want to sink a hefty amount of time into a more unique title on the 3DS. Who needs a AAA story when you have adventures to go on and all of the tools you could possibly ask for at the palms of your hands? Level-5 have made a bit of a treasure with here and while it may be repetitive, it knows how to hook you and reel you in with a constant stream of rewards. No matter what your tastes may be, Fantasy Life is sure to click for just about anybody willing to donate a heaping tablespoon of time and patience.