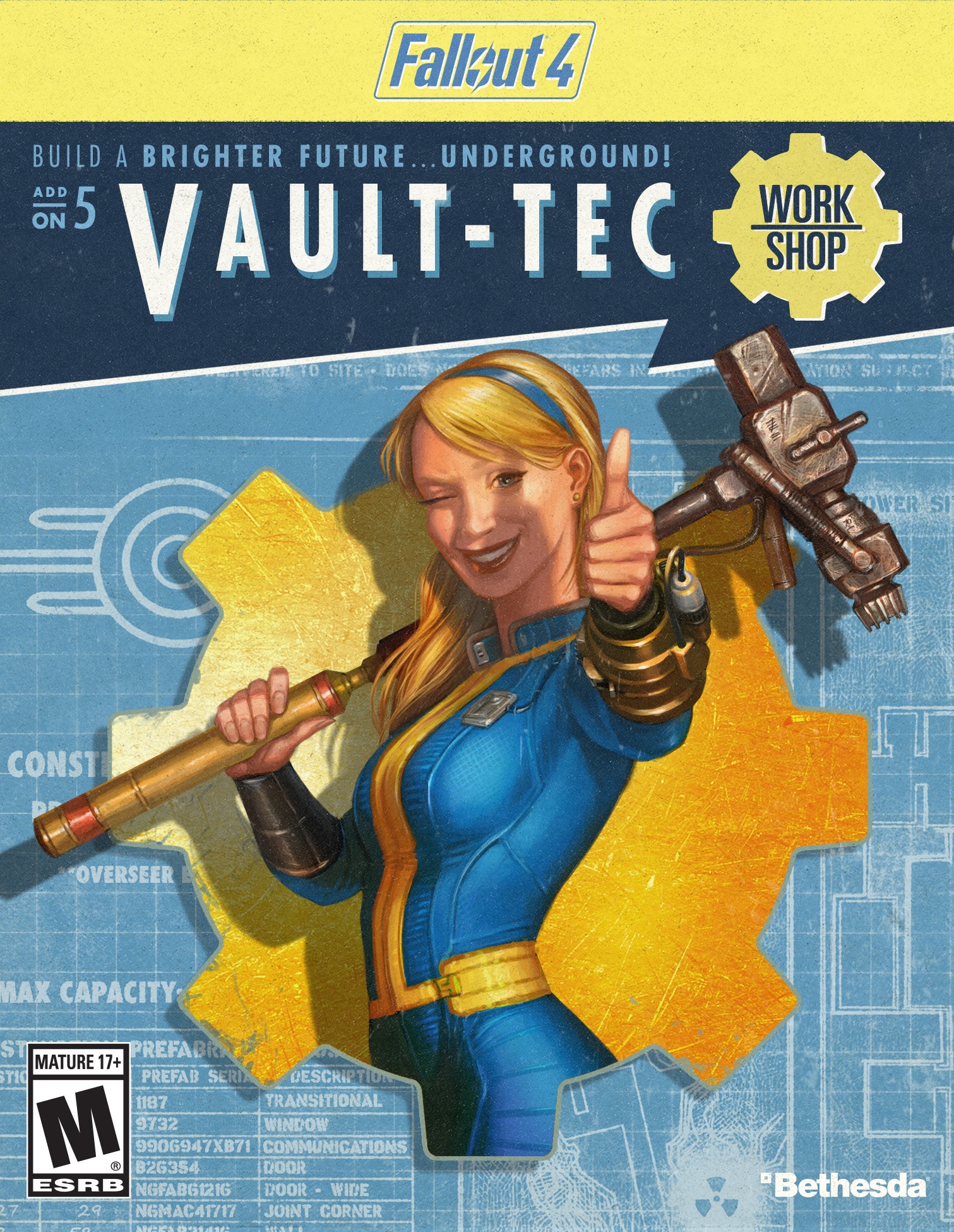 When Bethesda announced that they were planning to increase the price of the season pass for Fallout 4 to fit the amount of content that was going to be released, it is probably a good thing that the company offered it at the original price for quite a bit since so far the DLC has been fairly underwhelming. With only one substantial piece of content coming from Far Harbor and one so forgettable that it isn’t even worth mentioning, here we are with the second to last DLC for the game, Vault-Tec Workshop. Now that it has been released is Fallout 4: Vault-Tec Workshop worth downloading?

Fallout 4: Vault-Tec Workshop begins with the player receiving a radio transmission on their Pip-boy about a vault in trouble. Upon tracking down the location, Vault 88 is being assaulted by a bunch of Raiders who decided to dig a bit too deep into the side of a cliff and uncovered the vault in the process. Although they are making little progress at unlocking the vault door, the surprisingly alive Overseer continues to warn them to stay away until the player puts them all down.

Once the deed is done and the player opens the vault using their Pip-boy the Overseer believes that she is finally being saved by Vault-Tec and is surprised by the fact that the player is just a Vault Dweller. This surprise doesn’t last long as this Overseer turned Ghoul is completely unphased by the fact that so many years have passed since the world was torn apart by nuclear warfare and is already planning on getting the player to help her complete the tasks that the vault was designed for. 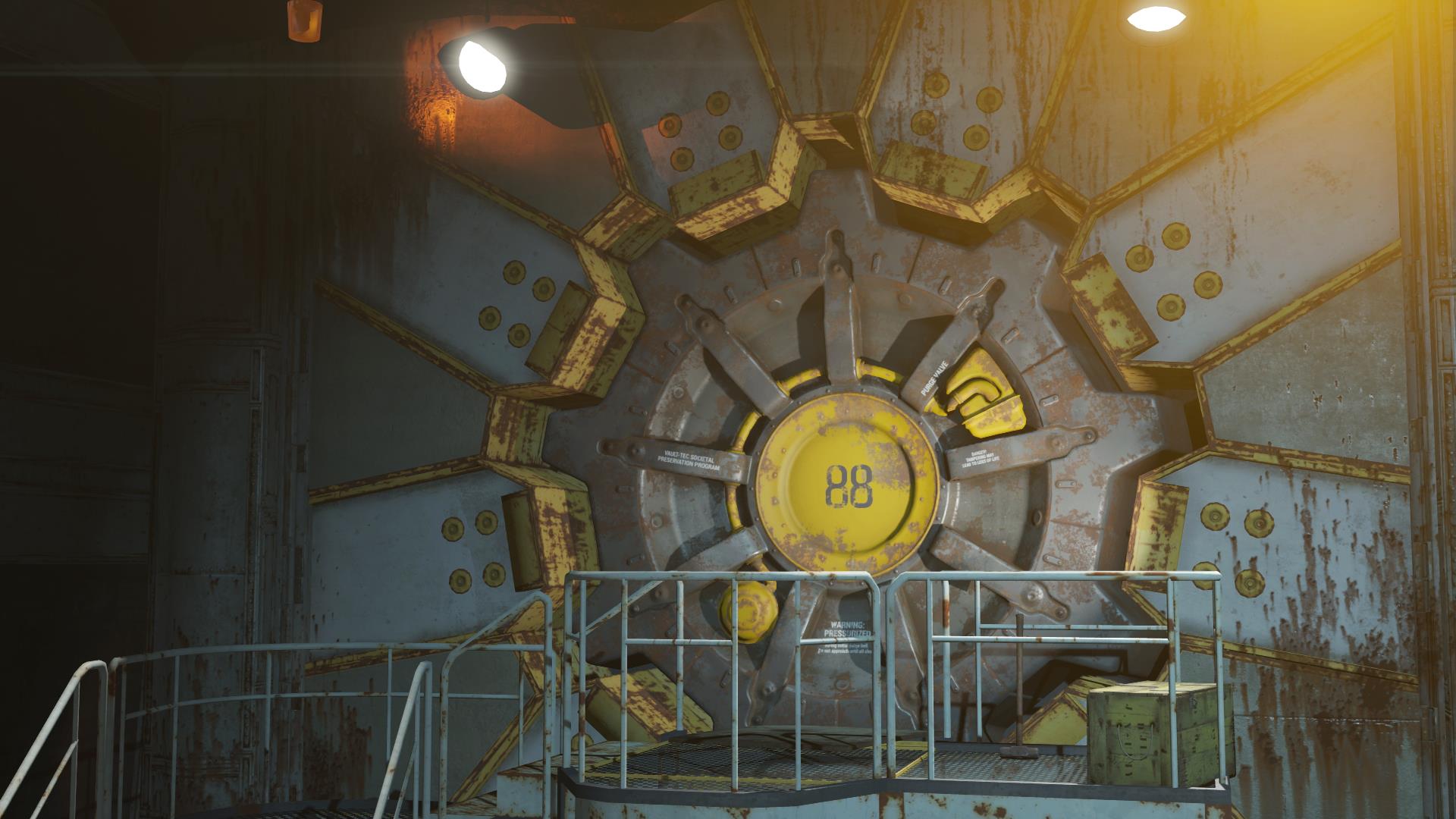 After being informed that Vault 88 was as far from finished as vaults come, with only the entrance area fully functioning in an effort to put up a front for investors, players must use the Workshop mode to clear out rubble, remove various debris, and activate the rest of the wings of the Vault that stretch all the way into a subway system and even a shop, making it hardly the safest and secure place one would expect.

Once completed and some residents begin to arrive the Overseer gives the player a few quests that involve testing various experiments on the characters that have arrived. Unfortunately these quests are incredibly simplistic in nature and even though one does send the player out into a different dungeon, those who have played the game in any form will have already cleared the dungeon and will simply find themselves walking through corpse filled hallways only to pick up the item at the end.

The rest involves simply crafting an item, attaching it to a terminal, and then powering up both things before telling the completely oblivious NPC Clem to fiddle with it for an hour. Once you run him through all of the tests available then you’re all done as far as the game is concerned, meaning those who wanted to try and run further tests on other settlers that move in will find that option lacking while those looking to see the outcomes of other variables better have an extra save file ready since they cannot be adjusted when chosen. 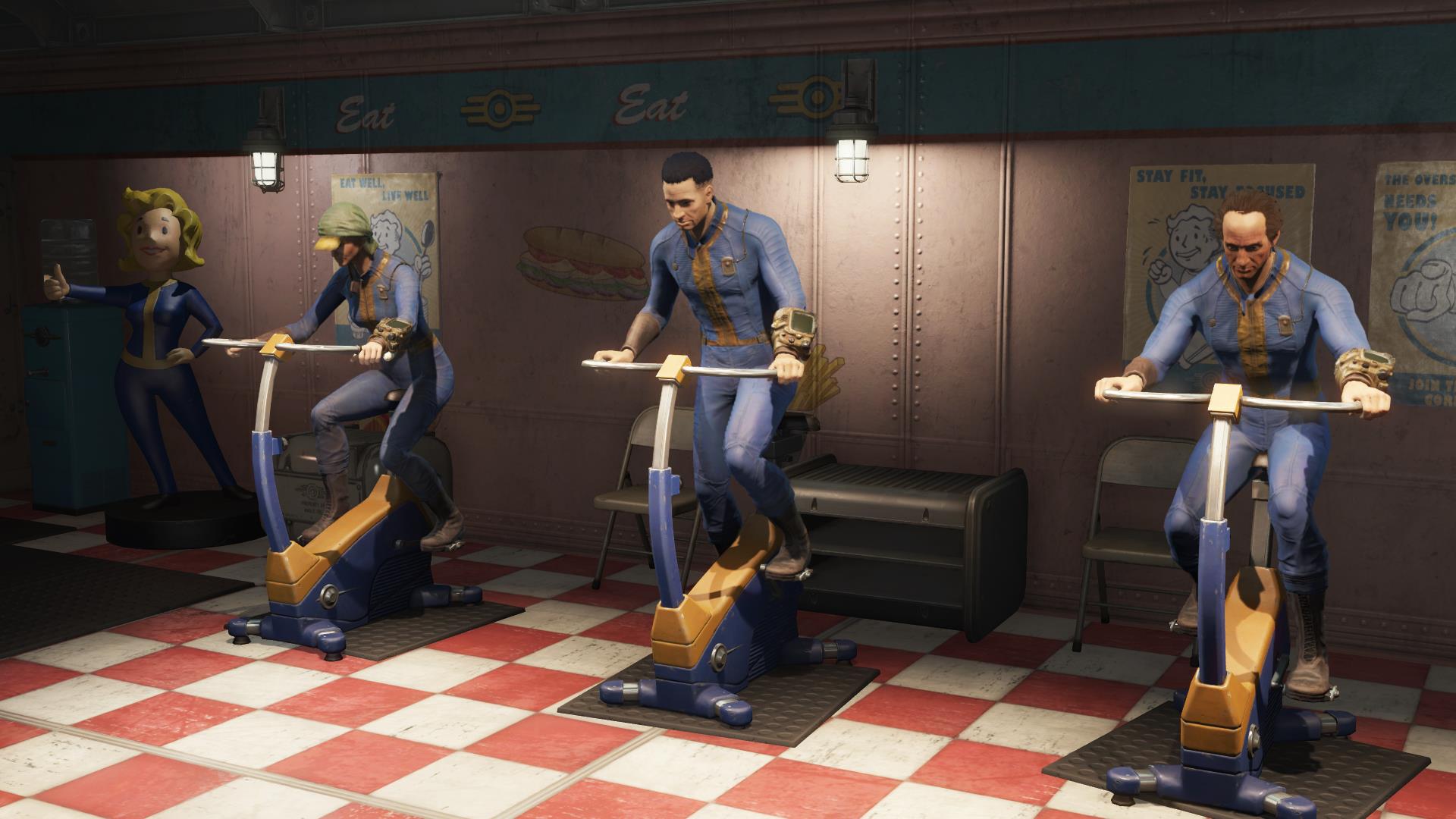 These variables are chosen before every test and range from simply providing a better taste to a fountain drink machine to completely suppressing the drinker’s appetite and even going so far to draw images out of a dweller’s brain using an eye exam machine or simply generating a pleasant aroma from a workout bike. Depending on what players choose from with these variables the Overseer will either be happy or so angry she will leave the vault entirely thanks to the results and put the player in charge of what she deems a failure and letting players proceed to simply treat the giant area as any other settlement.

Where Fallout 4: Vault-Tec Workshop fails to deliver on the promise of being able to micromanage and even perform experiments on your various settlers; it does manage to deliver at least through customization options. As players explore the vault for the first time they will find that it is absolutely massive to the point that players can create an absolutely gigantic vault while also taking on Radscorpions, Molerats, Mirelurks, and other beasts that aren’t keen on the player digging through their homes.

Once you manage to clear everything out you’ll find that the game offers a wide array of specifically themed vault style walls, rooms, and corridors to choose from with colors to code what they can be used for such as domestic, military, nursery, and more to choose from and even a massive energy system to construct if they feel. Thankfully, those who explore the vault will find more than enough debris and raw uranium to easily take care of everything without having to worry about tracking down extra items here and there. 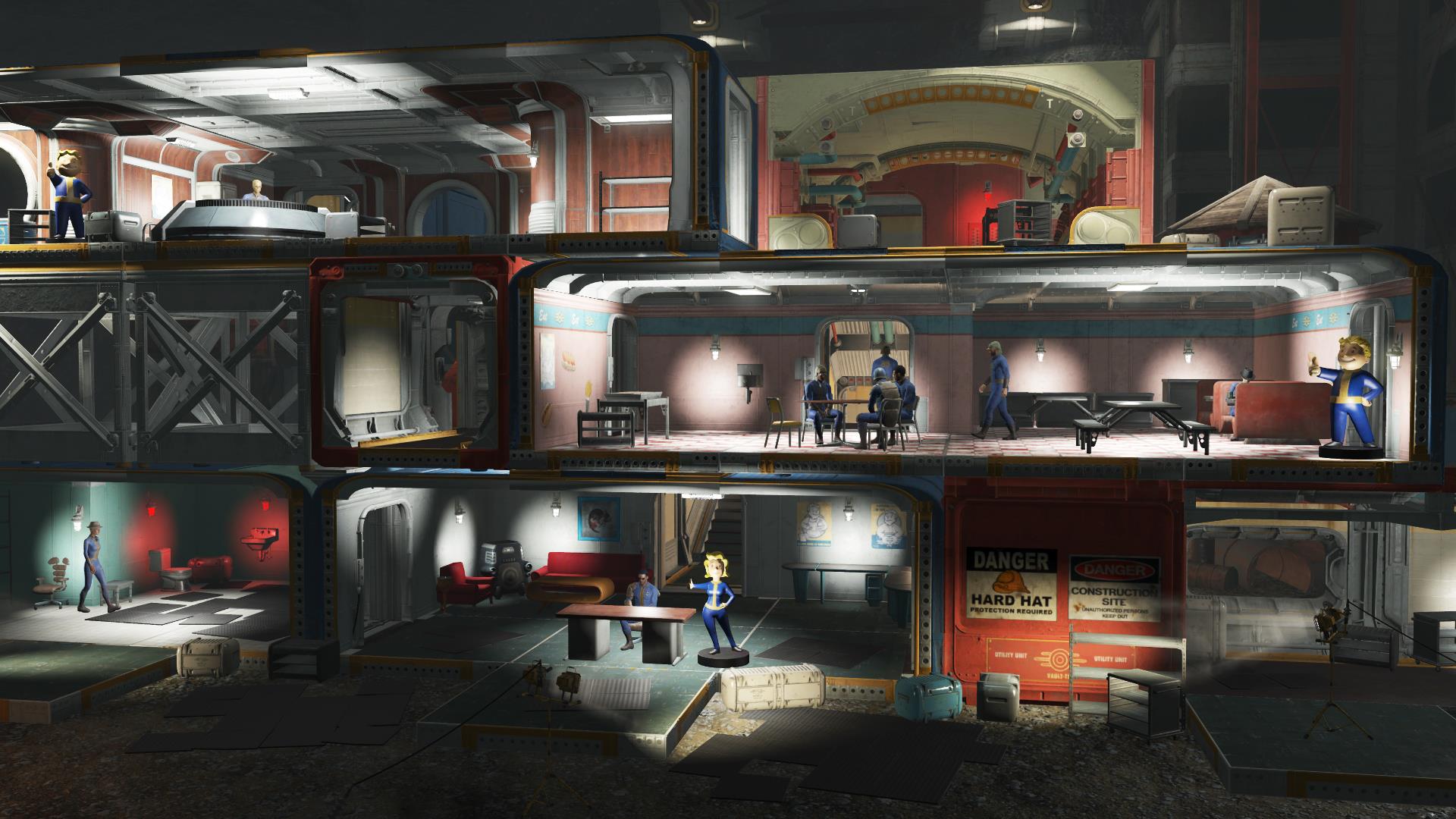 It is unfortunate to say that this also means that the game’s incredibly faulty snap building mode plays a big role in how much you’ll enjoy actually crafting rooms and hallways for your settlers to travel through since it continues to rely on how iffy the system is, often refusing to place pieces how you wish to or simply not being able to put them down altogether thanks to unseen obstacles.  One major addition, at least for gamers on consoles such as myself, is the Vault-Tec population control terminal that allows players to create little quests through the VIP tracker to show exactly where your companions are, meaning if you managed to send someone off to an unknown settlement and lost them, they can be easily found now.

As mentioned before, the wide array of new crafting options in this DLC is fairly impressive as it adds not only the aforementioned vault areas that are nicely color coded, but also a number of fancier items that players have likely been wondering about. This includes things such as clean beds, pristine and unbroken furniture, and in general less destroyed objects to place down to help craft an area that looks far more livable than anything before.

The voice work for the pair of new characters introduced in this DLC is handled well enough for the series, with Clem coming off as the naïve country-boy he is meant to portray and the Overseer being as cold as one would expect for someone who, upon being rescued after over two hundred years, wants to immediately begin experimenting on people.

Fallout 4: Vault-Tec Workshop manages to offer quite a lot of new objects for players to mess around with as well as an extremely large building space to take advantage of but those looking for any kind of lasting storyline or even the ability to experiment beyond the story’s scopes will be disappointed to hear that once it is completed the area reverts to the standard settlement expansion that fans are familiar with. This isn’t a bad thing by most means as the quests are rather interesting and you’ll want to go through it at least twice to see things taken to two different extremes but beyond the fancy new items you can craft, don’t expect too much else here.

Fallout 4: Vault-Tec Workshop offers more than the previous two Workshop oriented DLC packs but doesn’t deliver much in the way of storyline or lasting appeal outside of new shiny objects to tinker with.
6