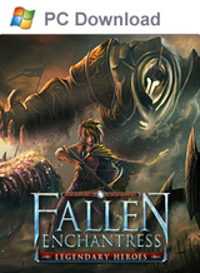 *Discounted price for those that have purchased the original title.*

Overview
Garnering a mixed reception from their previous title, Stardock Entertainment held on to their determined mindset to produce a standalone sequel to the strategy game – Fallen Enchantress. Yearning for success is everyone’s dream, but these guys had already achieved something that most of us cannot proclaim. By having an already published product, Stardock Entertainment could look at the public’s reception and gear the next chapter of the company’s life in a new direction. Did they succeed in this new venture?

Story
As ancient lore states, Elemental was once a radiant world flowing with magical energy. In these times the magical energy was utilized by men in creation of three powerful civilizations. However, this extraordinary pulsing magic could be felt across the universe, and soon immortal creatures came upon Elemental to take the magic as their own. These immortal creatures became better known as Titans and took the innate powers from the world by creating shrines across its lands. Titans found little resistance now from the race of men as their powers had diminished with the creation of shrines. As the fall of men became imminent, later generations were born with the innate ability to use these magical shrines across Elemental. A great conflict started brewing between warring Titans, and the race of men knew well when to play their cards. The greatest magic in the battle’s finest moments was the leader of men’s sacrifice. Magic tore the ground asunder as The Cataclysm took effect. 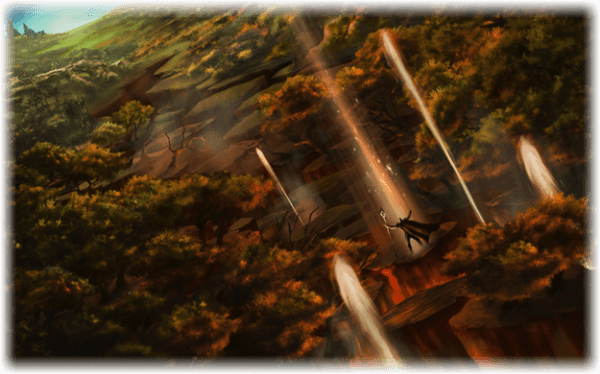 What is left of Elemental? The land remains but now torn between factions of different races. Two distinct groups are known: The Kingdom and The Fallen. The Kingdom are populated by races that hope to attain life that existed in the pre-Titan era. Yet The Fallen choose to destroy or assimilate their foes into slaves following the Titan mantra. Elemental has known much destruction, but who will rise above all others?

Other than a brief introductory cinematic, Fallen Enchantress: Legendary Heroes does not provide much of a background within the game. Obviously by creating a custom game, you will be departing on your own adventure and thus create your own background story. However, players are able to access “lore” from the title’s website which details the main turning points previously mentioned.

Gameplay
If I had to describe the gameplay for Fallen Enchantress: Legendary Heroes in only a few words, I would say the game is a “hellaciously addictive, fantasy, Civilization mash-up.” Even without fully grasping the world’s lore, players can snatch up this title and pour endless hours into a single campaign. An aspect that invokes hours of endless play is the game’s theme as a fantasy driven Civilization. Instead of building realistic armies like Civilization 5, players can attune their characters to the mysterious weaves of magic and battle great monstrosities of legend.

I feel that without the tutorial the game would be very hard to grasp for beginning players. Yet I did appreciate that Stardock Entertainment did not force its players to complete the tutorial before starting a game. The tutorial goes through the basics of how to make a settlement, enrich your settlement by casting magic, build units/structures, and perform quests. Settlements are the focal points of your kingdom and allow you to expand your area of control as well as provide additional resources. Placement of a settlement can be extremely important when considering surroundings such as mines, free range horses, or magic shrines. Players can also enrich their settlements by casting spells on them to add in the production of research, grain, essence (magic), gildar (currency), and much more. Choosing the correct enhancement for each settlement is important as it may decrease the amount of seasons you wait for new units, research, or money. 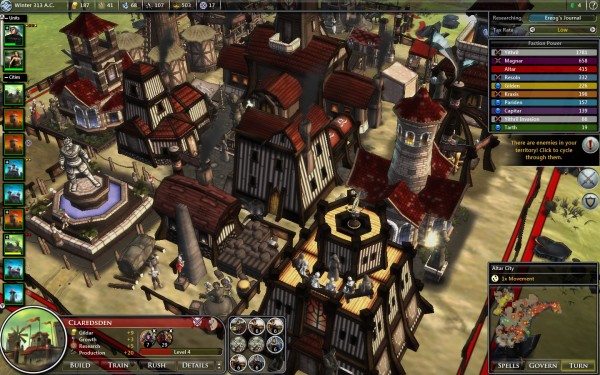 Seasons are basically considered the number of turns that an object will take to research, train, build, or move. However, the number of turns can be reduced by decreasing unrest in your settlement, connecting settlements by creating roads/outposts, or performing specific research. If the citizens of a settlement are unhappy, the amount of seasons to create a structure or unit may be doubled or in intense situations almost unattainable. Placing your sovereign or other attained heroes in the settlement may help reduce unrest.

A detrimental aspect that should be mentioned is that the game automatically shifts to the following season once you set a chain of events. At first this seems very convenient as the game continues its flow, but this is a strategy game after all. An example of this would be positioning units in or around an enemy encampment. Let’s say you noticed multiple encroaching enemy forces, and you wanted to move out of the area. You set the destination to a nearby settlement that takes 3 seasons, and as the movement finishes you end your season automatically. A season has been solely used to move one army when other units could have utilized. Granted that this does not always occur, and even in most cases as one army movement ends the game switches to other available units. In the heat of the moment, the automatic change of seasons could be very disastrous. Note that this option is automatically selected in your main menu options and can be turned off.

Bringing in a greater role playing element, quests are available to provide instances for heroes to gain fame. Beginning at with lowly tasks such as exterminating rats, these rewarding experiences can build to grand adventures of discovering ancient ruins or encountering the most deadly of creatures. While performing quests is not the only way to acquire fame, it is perhaps the easiest way to gain new heroes to join your mighty quest. 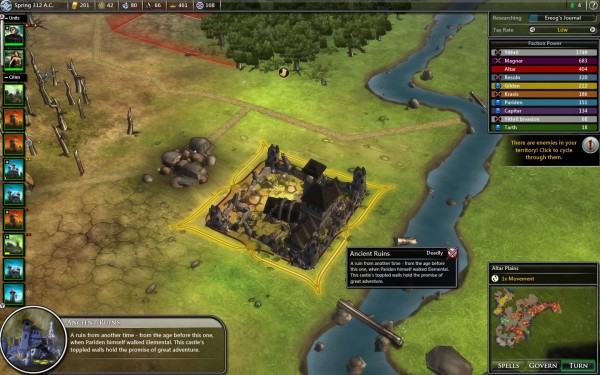 Let’s take a step back for a moment and retrace our steps back to the completion of the tutorial. From personal experience I would advise you to create a custom match with only a single opposing AI. You can make the game as simple or as hard as you would like regarding the AI’s experience and conditions to win the game. But for the first game I would suggest selecting all of the potential end game conditions, so that you can attain victory your very first match. If the AI believes you to be too powerful, they may concede to becoming allies which would result in an automatic win. However, these are trying times and you cannot just allow the AI to give up so easily… DESTROY THEM!

Alternatively, players can engage in a more rigorous trial by playing a Scenario instead. Scenarios are pre-built maps that engage players in individual races and their personal story in the events of Elemental. Do not expect to complete this match quickly as it may take plethora of hours to gain an advantage over your foes. To use personal experience, I am currently over 10 hours into my Scenario. Remember when I mentioned that this game is hellaciously additive? Yeah, 10 hours just flew by… 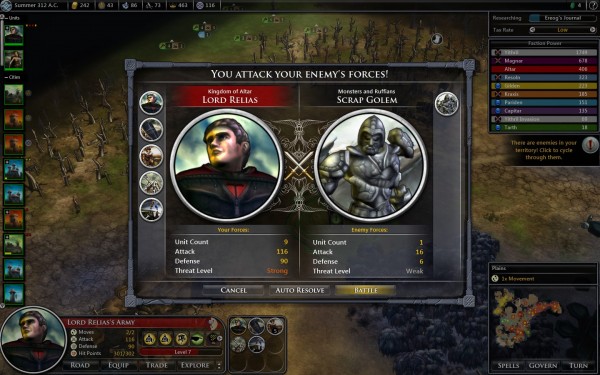 Depending on personal preference, battles can be automated or personally engaged. For those control freaks like myself, you may feel that every battle requires your undivided attention even if the odds are overwhelmingly in your favor. However, automating battles can greatly reduce the amount of time spent in battles yet take a tole on your group of forces. I must admit that there was one instance that I believed that I would undeniably falter and pressed automate. I was pleasantly surprised to see that my single, unmanned catapult was able to decimate a horde of archers. Seeing the battle results was a complete shock because I automatically assumed I had spewed money into a pile of planks. Yet I scrolled through the enemy forces and saw that all had been reduced to zero. At that moment I saw success.

Visuals/Audio
Attention had clearly been given to the monsters that inhabit Elemental. In the storyline some of the greatest fiends existed even before the invasion of the Titans. One such monster lies in the depths of Elemental and is appropriately named Abeix, Who Dwells Beneath. Given the appearance of gigantic scaled worm, Abeix has many unique powers such as: poison immunity, uncontrolled rage (immense melee damage), spit acid (damage over time), and fear. Even from a visual standpoint adventurers should know not to go hand-to-hand with this crazed beast. Fill up your party queue with leveled archers and then have a go with him. 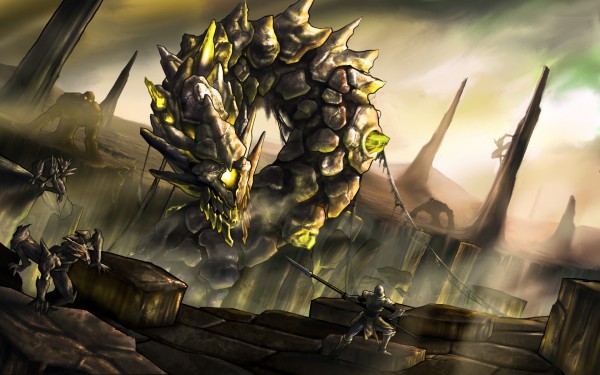 Those who are looking to create their own hero will be welcomed with open arms in this title. Instead of choosing one of the pre-generated heroes of Elemental, you can mark your own place in Elemental history by making your own character from head to toe. This includes choosing magical traits, leadership abilities, appearance, and even starting equipment. Once a character is created, this avatar may be used in any future game that you begin. However, stats from previous games do not transfer.

Continuing the line of customization, players can alter the look of their troops by designing their own custom armies. Tired of creating the same ole archers? Under the “Train” icon, a “Design” option is available for those that truly want to customize their gameplay experience. Want archers to wear mage robes? Make it happen with a few changes and even name them something silly like: “Misguided Arrows.” 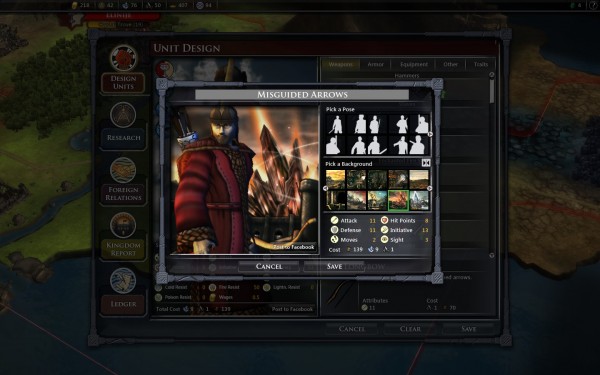 While some titles are plagued with long cinematic scenes, Fallen Enchantress: Legendary Heroes could be enhanced by further attention to audio and visual development. The initial cinematic does not instill a great amount of lasting knowledge for players as I have noted a need to use their website for information. Implementation of cut-scenes for major battles in Scenario would help bridge the visual and audio gaps in the storyline instead of purely having these deliverables text driven.

Overall
What could be changed in the game? Being one that falls into a game purely for a story, I couldn’t help but be slightly disappointed with the lack of continuing story from previous events through active visuals and audio. Though other gamers may prefer to be tossed into the fray of bloodshed, I like to visualize my efforts in line with the world I am engaging. Other issues that I have experienced and documented through my gameplay can actually be altered in the main menu options.

In conclusion, Fallen Enchantress: Legendary Heroes has been a thrill to play due to its addictive nature as well as the plethora of customizations available for its characters. With a solid foundation for gameplay, the game would continue to be enhanced by implementation of cut-scenes that address major events. The $40 price tag may deter some from an initial purchase, but then endless amounts of hours plugged into the game already can attest to the quality of product that Stardock Entertainment has provided. A title well worth your investment.