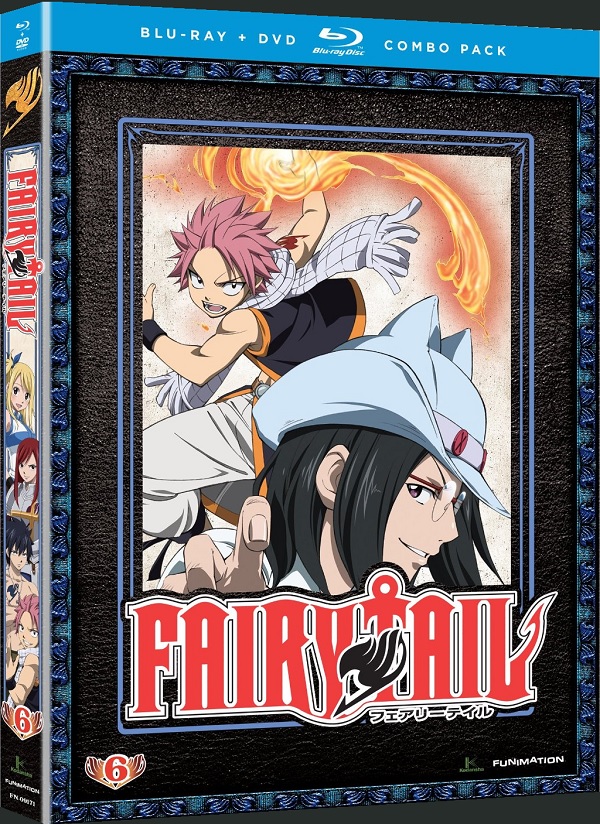 Overview
With FUNimation currently working on bringing their second set of Fairy Tail releases over to North America and the welcome news of the company licensing the rest of the currently aired anime episodes, fans have plenty of Fairy Tail to look forward to. For now though, how does Part 6 line-up? With Fairy Tail: Part 5, the review of which can be found here, leaving us in the middle of the Oración Seis arc does this part leave viewers satisfying conclusion and continuation of the series? 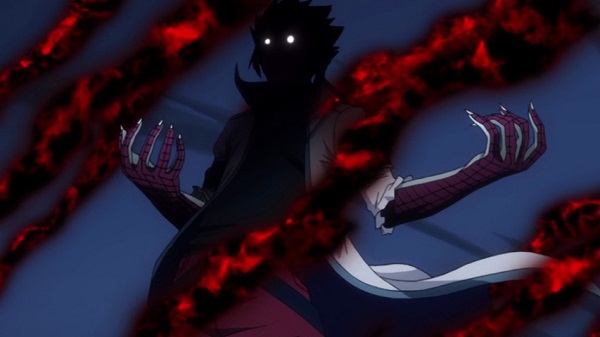 However with Nirvana already activated and the powerful magic city moving towards its first target, Natsu must first take on the powerful Cobra while Erza and Jellal face off against the mysterious Midnight before anyone can hope to put a stop to this magic instrument that has the power to change the hearts of people everywhere for better or worse.

Since most of the storyline for this arc was taken care of in the last release, Part 6 mostly focuses on the battles between the still standing wizards as they attempt to disable Nirvana. However even when they believe that victory is within their grasp, a new foe emerges that is fiercer than the rest of the Oración Seis combined and cares little for human life. Standing as the last obstacle in their path to putting a stop to Nirvana, Natsu must take on this new opponent while his allies work together to destroy Nirvana once and for all. 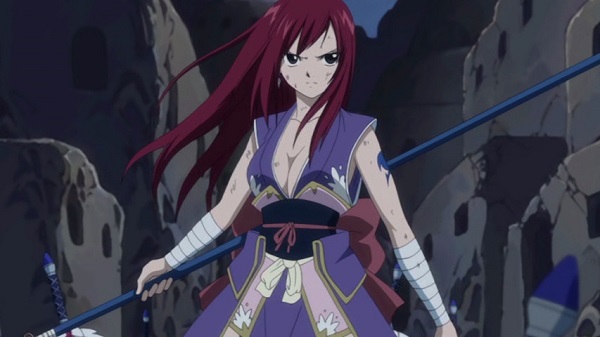 Despite the large number of characters introduced in this arc, only a handful of characters receive any sort of development and this remains true all the way until the end, where the emotional truth behind Cait Shelter is revealed and the newly formed Magic Council makes their move to arrest the Oración Seis. Replacing most of the character development are a number of intense combat sequences, mostly involving Natsu as he takes on not only Cobra but the new opponent as well.

Rather than end on that note however, Fairy Tail then shifts into a mini-arc that involves a crazed woman named Daphne. It is worth noting that compared to the source material; this is a filler arc which is unfortunate as it ultimately feels barely relevant outside of exploring a bit of Natsu’s past and giving the Fairy Tail wizards a chance to take on a new opponent before wrapping everything up in the end. 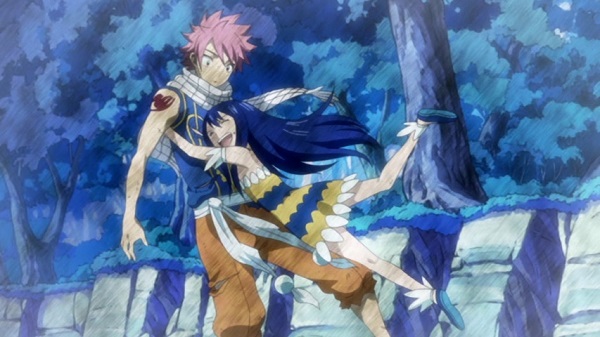 Fairy Tail: Part 6 starts off strongly by throwing viewers right into the height of the Oración Seis story arc and follows it up with some very minor character development, enjoyable action sequences and a bit of emotion as well. Unfortunately it does end on a rather poor note with the filler arc, thankfully the arc does not overstay its welcome and ends in this release.

Visuals
Fairy Tail remains rather impressive throughout the Oración Seis story arc as far as animation quality goes. Character designs remain relatively standard and the action sequences are impressively handled with no noticeable dips in quality. It is worth noting though that the desolate town of Nirvana makes for a rather poor backdrop to most of the action as its bland design leaves much to be desired. 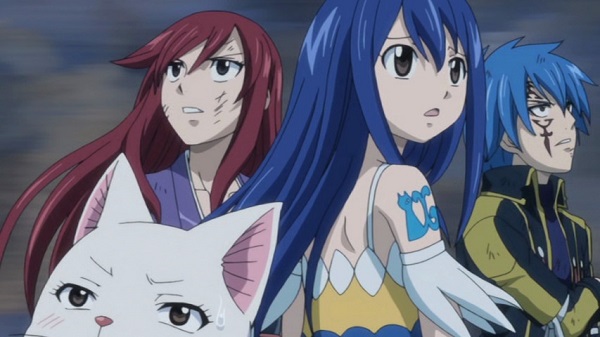 Unfortunately the quality found in the Oración Seis arc takes a rather large dip once the filler arc featuring Daphne is entered. While everything still remains rather brightly colored and the newly introduced character and world are nicely handled, the overall quality dips rather often compared to the rest of the episodes offered on this release.

Audio
Since this is the middle of a story arc, all of the characters that are found in Fairy Tail: Part 6 have already been shown off to viewers, outside of the new opponent that just so happens to share the same voice actor as one of the Oración Seis. As such, the English cast remains impressive throughout the arc and although the quality of the series may dip in the Daphne arc, Gwendolyn Lau makes the experience bearable by doing a great job as the voice of Daphne. 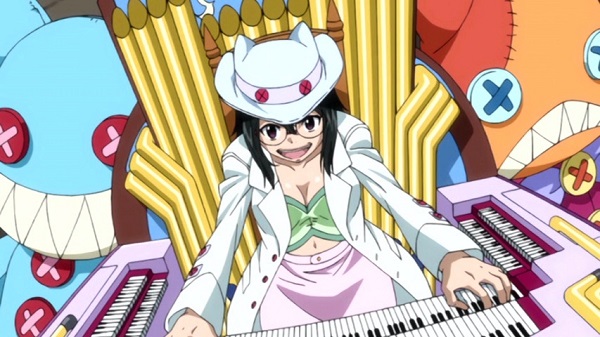 As far as background music goes, Part 6 makes use of the same tracks that we have heard multiple times throughout the series, leaving little to be desired but bringing nothing new to the table. The opening theme for Part 6 is “Fiesta” by +Plus and is something different from your standard Fairy Tail openings, making it worth checking out at least a few times. As for the ending theme, it is “-Be As One-“ by w-inds. and the anime makes great use of this dramatic song throughout this release as it always begins playing during the final few seconds of the episode, often during an emotional moment that is especially striking on Episode 68.

Extras
The bonus features for Fairy Tail: Part 6 include a handful of on-disc extras which are rather standard at this point. A clean version of the opening and ending theme, the US trailer for Fairy Tail and trailers for other FUNimation products are found on the disc alongside two commentary tracks. 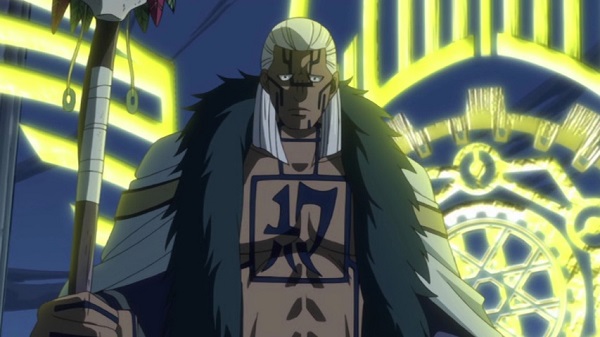 The first commentary is for episode 64 and features Tyler Walker, the ADR director, Philip Weber who does the voice of Brain, and Micah Solusod who handles the voice of Midnight. The three discuss the show as well as the Tower of Heaven connection as well as some of Micah’s past work. The second commentary track is for episode 70 and features Tyler Walker once again, Todd Haberkorn who voices Natsu, and Gwendolyn Lau who as mentioned before, voices Daphne. The three spend some time talking about the episode and random things as well as where Gwendolyn has been the last few years.

Overall
Fairy Tail: Part 6 successfully places viewers right back in the action at the height of the Oración Seis arc and manages to deliver everything that viewers could ask for from the series, such as plenty of action and a bit of development here and there. However this release is dragged down by its latter half as it drops in quality as the series shifts into a minor filler arc that, while entertaining and humorous in its own right, suffers from a rather significant drop in production quality and feels disjointed from the rest of the story.