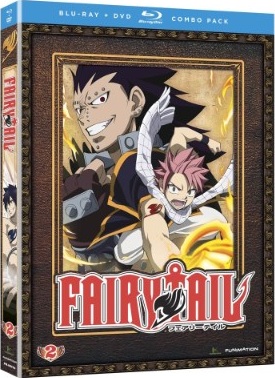 Overview:
One of the common complaints that can be made about an anime is that the series was too short. This complaint usually is compounded by various smaller complaints about the way the story was developed or lack of character development. On the other hand, shōnen series are able to avoid this hazardous pitfall as a number of shōnen series break out of the airing limitations for other series and have the potential to run for over a hundred episodes without breaking a sweat.

One of the newest shōnen series to come out of Japan is Fairy Tail and FUNimation has been more than ready to bring this title to North America and localize it for our viewing pleasure. They just recently released Part 1 of Fairy Tail last month and you can find my review for that part here, but now we have Part 2 of the series. Does it take the same magic the first part of the series had and run with it? We will find out.

Story:
While some people may wish that magic is real, in the world of Fairy Tail not only is magic real but it is a part of everyday life. Magic is so engrained in the society that many wizarding guilds have appeared throughout the kingdom of Fiore. While there are many guilds populating the land, one of the most recognized and talked about guilds is the Fairy Tail guild. 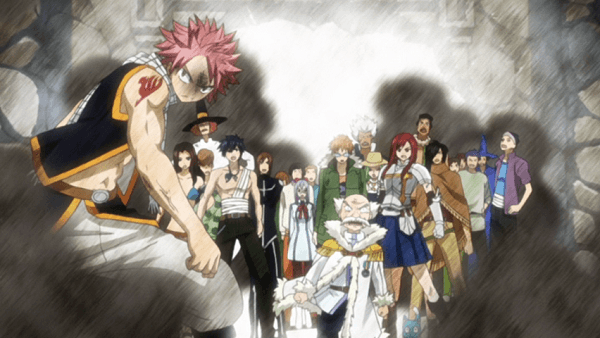 In Part 1 we were introduced to the main cast of characters that would be followed throughout much of the story as well as a number of important side characters. Lucy, a celestial wizard capable of making contracts and summoning celestial creatures with Gate Keys to help her out in any way possible (though a few have some personality flaws) met up with the flame using wizard who lets his flaming fists usually do the talking, Natsu. These two were then joined by an ice using wizard named Gray who has a tendency to take his clothes off without a moment’s hesitation and a powerful S-Class wizard named Erza who is capable of using extremely advanced and powerful armor and weapons with her requip ability.

Now Part 1 of Fairy Tail ended with quite a terrible cliff hanger sitting right in the middle of the first major plot-driven quest of the series. The residents of Galuna Island all transform into demons whenever the moon rises, the quest quickly escalates however once Natsu, Gray and Lucy learn that a group of wizards is trying to reawaken Deliora, a demon so powerful it could not be defeated but simply sealed away. However that sealing didn’t come easily, in fact the leader of the enemy wizards’ leader is Lyon, a fellow student under the same wizard who taught Gray everything he knew. That same teacher who sacrificed her life to hold the devastating demon in ice forever. 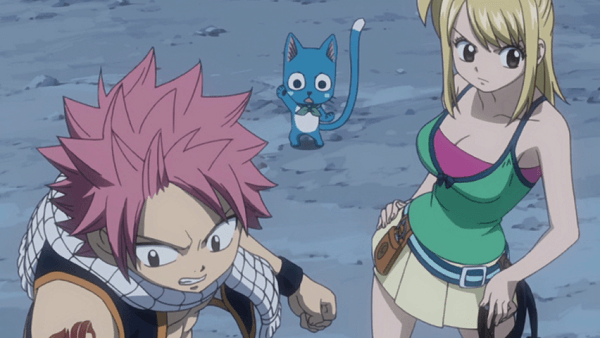 This story arc helps show everything that Fairy Tail is capable of, as the cliffhanger from the Part 1 is resolved. Until this story arc, only a Lucy had seen any character development and the series benefits greatly as a whole by adding a bit more backstory and emotions to one of the main characters. The story progresses from there with some very small character development for Natsu and Happy as we learn how the two met.

Now while most people who pick up Part 2 will be doing so they can watch the finale of the Galuna Island story arc, Part 2 also contains the beginning of the Phantom Lord story arc. While there are many guilds in the world of Fairy Tail they usually do not wage open combat against one another… that is until the wizards of Phantom Lord destroy the Fairy Tail guild’s headquarters. Why would this rival guild deal such a blatant attack and begin assaulting Fairy Tail wizards? As it stands the Fairy Tail guild refuses to stand by and take this and goes to open war with the Phantom Lord guild. However the guildmaster of Phantom Lord has ulterior motives for his attack on the well-known guild and with his unique magical abilities and the powerful wizards known as the Element 4 under his command, what will happen to the Fairy Tail guild? 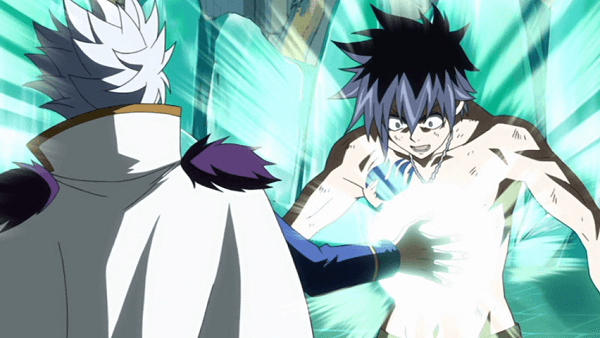 Unfortunately, as with Part 1, Part 2 of Fairy Tail ends smack dab in the middle of the story arc so those who are interested in seeing how the arc will end must purchase Part 3 which is set to be released next month. As it stands however, the studio has done a perfect job building anticipation for this battle by raising the stakes higher than they ever have been before for the members of the Fairy Tail guild.

A multitude of characters see some minor development which is a major plus for this series, as characters you learn nothing about and simply watch defeat enemies grow boring quickly. It is a bit disappointing however that a number of the characters still feel like they could be expanded upon faster in these earlier episodes. Not to mention a glaring plot hole exists right in the middle of the two story arcs as a random gag episode was inserted immediately after the end of Galuna Island which had absolutely zero effect on the story and is subsequently ignored later on.

Visuals:
One of the biggest highlights in Fairy Tail is the art design as a whole. All of the characters have their own unique designs and look nothing like one another which is a plus considering the large amount of characters that the Fairy Tail series has to work with. The enemies introduced in Part 2 are all rather distinctive looking as well, this being especially true for the members of the Element 4. 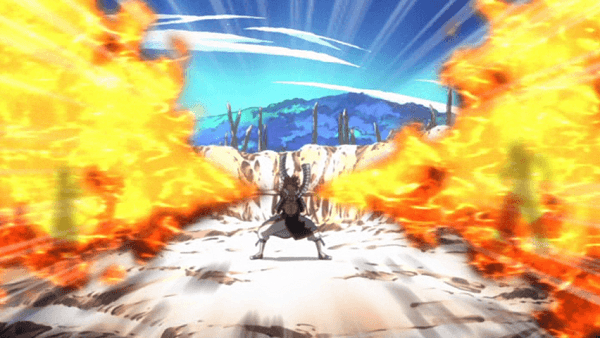 Unfortunately the same consistent quality that I experienced in Part 1 didn’t stay true for Part 2. While most of the time the animation felt nice and smooth, there felt like a number of shortcuts were made in some of the action scenes, this being especially true outside of battles where the character designs are less detailed. Inside of battles it sometimes feels like there is a bit too much standing around and not enough actual fighting happening.  Plus, each episode will have a rather cheaply animated Natsu warning children to watch the show in a well-lit room which probably would have been best removed.

Out of all of the various visual effects in Fairy Tail however, the most interesting are those having to deal with the magic cast by the characters. While Erza’s ability may be to change her clothes and weaponry each outfit has its own unique appearance often having to do with the outfit’s specialty. This stays true for the rest of the characters in the series as they cast their spells and use their abilities to deal out damage. It only makes sense that the visuals for Fairy Tail’s magic are the highlight and thankfully the series continues to impress in this regard.

Audio:
As one would expect, all of the voice actors who handled characters in Part 1 have retained their characters and the level of quality of each of these is still quite impressive. Whether it be Todd Haberkorn’s fiery performance of Natsu or Cherami Leigh handling the wide-ranging emotions of Lucy each of the characters’ are performed splendidly. Newly introduced characters are also voiced well, though I found the voice acting of the Element 4 characters to be rather average and unimpressive. 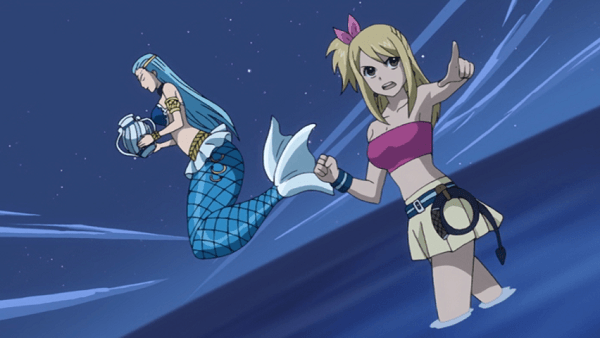 The background music in the series itself is unfortunately quite generic and nothing stood out even amongst the biggest fights in this part of the series. The opening song for all of the episodes in Part 2 is “S.O.W. Sense of Wonder” by Idoling!!! and the ending song is “Tsuioku Merry-go-round” by Onelifecrew. Sense of Wonder is accompanied by a well done animation sequence and the song itself is interesting enough but most viewers will likely end up skipping through it to get through to the actual show instead of sitting and listening to it. This is similar with “Tsuioku Merry-go-round,” although the ending animation for it is a bit unique, with chibi characters mixed with normal character designs throughout.

Extras:
Fairy Tail Part 2 comes with your standard inclusion of a clean creditless version of the opening song as well as for the ending song. There is also a set of trailers for past and upcoming FUNimation releases which is also standard. What isn’t standard however is that two of the episodes have been provided commentary. Each disc contains one episode with voice actor and director commentary. 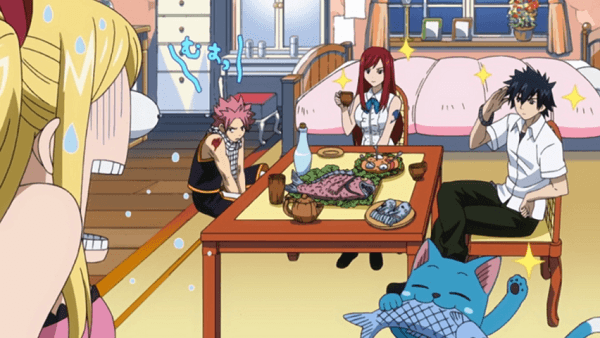 Overall:
Fairy Tail continues to be a performance in excellence in a number of areas. Viewers will finally be able to view the conclusion to one story arc and will be thrown into the next full story arc shortly after. While it is unfortunate that the story is still left as a cliffhanger until Part 3 is released, viewers will walk away from Part 2 with a better understanding for a few of the main characters and be eager to come back for more. Though the animation quality does suffer through various shortcuts made by the studio, FUNimation’s excellent cast of voice actors has done a superb job bringing each scene to life and creating yet another amazing journey in the land of Fairy Tail.