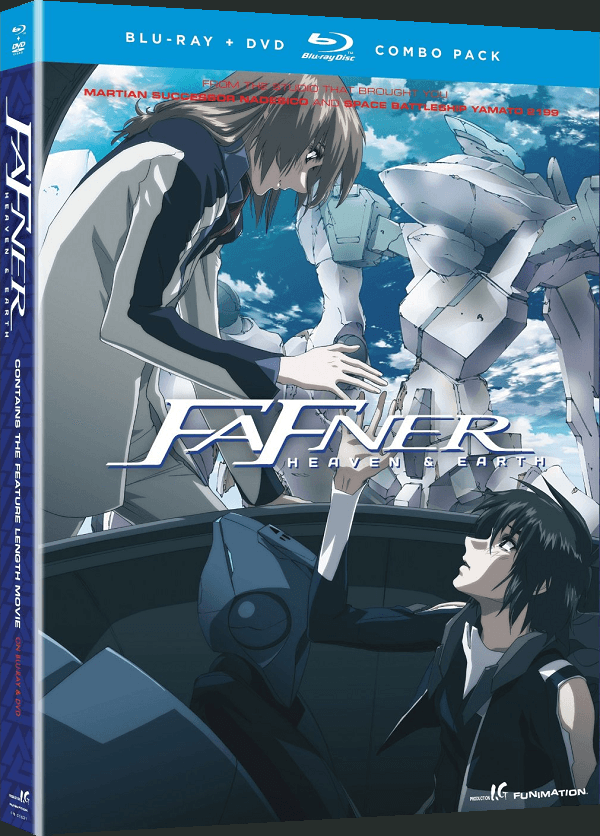 Overview:
Back in 2004 a series was created by the name of Fafner and the anime was brought overseas to North America only a year later courtesy of the now defunct Geneon Entertainment. Since then FUNimation not only rescued the license to re-release the original series, the review of which can be found here, they have also acquired the rights to the anime’s follow-up movie, Fafner: Heaven & Earth. Now while the original series may have been generic to a point, does this movie fare any better?

Story:
The story of Fafner: Heaven & Earth picks up two years after the final battle at the end of Fafner where the brave forces of Tatsumiya fought against the very core of the Festum invasion. With nearly two years of peace, the pilots and the rest of the people of Tatsumiya have begun to relax and return to a normal life despite Kazuki still waiting for the return of the missing Soshi and the mental scars everyone must bear from the horrible battles they faced.

However this peace is suddenly shattered when a new form of Festum appears and starts attacking the island with a new set of tactics that mimic those used by the military forces of the island. As the pilots return to the fight with a few new faces, a mysterious ship appears at the island and within it contains something they have never seen before. A Festum in human form. This Festum tells the humans that he is a messenger from Kazuki’s lost friend Soshi. 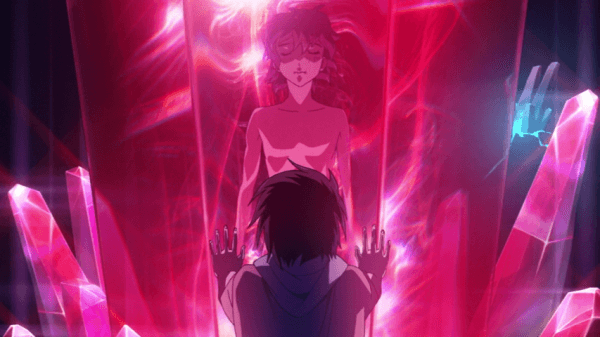 While this new Festum has appeared and begun living amongst them in an attempt to learn more about simple human life, other Festum continue to attack and lay waste to the island and it’s inhabitants. The people of the island have a critical choice to make, either work with this human-like Festum and try co-existing with the creatures or face being ground to dust by the constant attacks of the Festum forces. What will happen as the battle against the alien Festum continues?

Now it is worth noting that very little explanation is given regarding the events leading up to this movie, so it is essential that the viewer has seen the original series before trying to watch this, for if they were to try they would be so deep in the dark almost nothing in the series would make sense. That being said, Fafner: Heaven & Earth already has one thing that makes it a major improvement over the television series. A faster pace.

The original Fafner series was incredibly slow paced with any plot points taking multiple episodes to work themselves out. Now while it may have been a twenty six episode series, the story ultimately fell flat with more focus on overly-dramatic scenes than anything else. However with the Fafner: Heaven & Earth movie length limitations, viewers are instantly thrown into the middle of things with plenty of action sequences and a number of new developments to wrap their minds around. 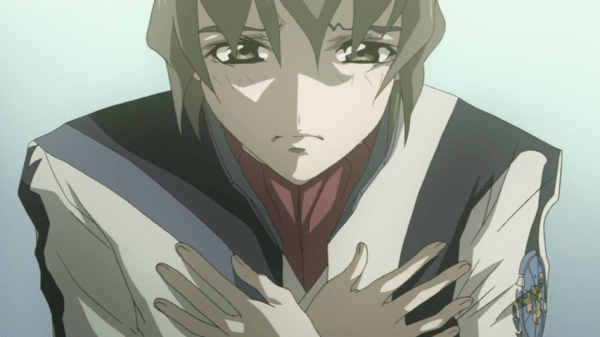 Perhaps the most interesting part of watching the Fafner: Heaven & Earth movie is seeing the new Festum human interact with others and come to grips with various human emotions. While there is still plenty of drama for the returning cast of characters, witnessing this character undergo these experiences is something unique and worth watching.

That being said, Fafner: Heaven & Earth provides a rather solid series of events that lead up to the next final battle, though even those who’ve seen the original series may lose track of the story thanks to the fact that it still poorly delivered despite the faster pace. However with a few new twists and the difficult choices that Kazuki must make throughout Fafner: Heaven & Earth the movie holds itself together well enough throughout its hour and a half air time.

Visuals:
it is very interesting to see the jump in quality that Fafner: Heaven & Earth sees now that it was created back in 2010 compared to the 2004 television series.  It also helps that Studio Xebec, the same studio for the original series, has returned and spent a lot more time making sure everything presented in the movie is impressive. 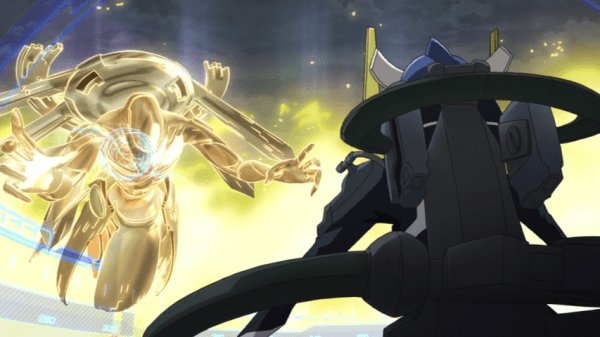 There are plenty of quality fast-paced action sequences which are now presented in glorious HD and the mechs and Festum have never looked better. It is worth noting that the character designs have remained the same, so this means that they retain their relatively generic appearances but since the overall quality of the animation has improved, the character designs are more tolerable this time around.

Audio:
Now one thing that any fan should know is that the original Fafner series was dubbed back in 2004 by an entirely different company. This means that now in 2012, FUNimation has had to try and bring back a cast of voice actors who haven’t worked on this project in eight years. Unfortunately only one member of the cast returns so there are some differences in the casting, on the other hand the new cast does do a great job selling the story and voicing the characters by not only doing their best to match the original cast but putting more effort into their performances than the original cast. 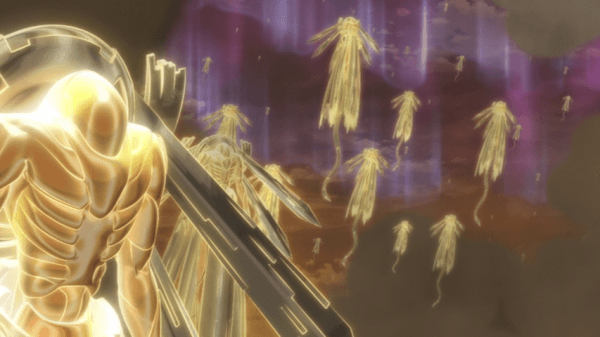 That being said, a Japanese voice track is still available for those who prefer that route. As for the background music in Fafner: Heaven & Earth it is rather generic with standard music tracks that viewers will feel like they have heard a million times before. Unfortunately the same can be said for the movie’s theme songs performed by Angela only the one dramatic insert song is worth listening to and really helps the scene have a deeper impact, while her other songs sound similar to many other action-type songs in the past.

Extras:
As far as bonus features go, Fafner’s movie is rather scarce. There are your standard promotional materials such as trailers for various FUNimation releases, a trailer for the movie and a selection of commercials that were aired in Japan before the movie’s premiere, as well as a commentary track. 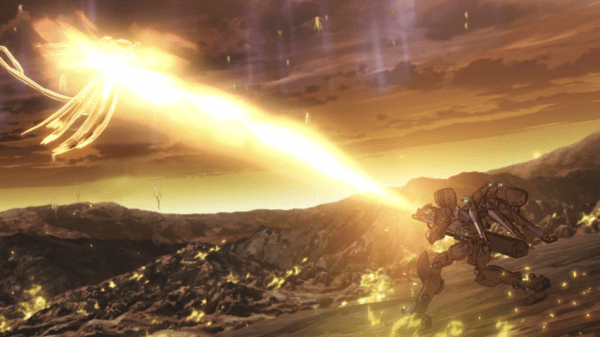 Considering the only thing in this release is one singular movie, the commentary track is actually the full length of the movie which means you will be listening in to Jeol McDonald, the director and voice of Misao and Micah Solusod who provides the voice for Kazuki talk for a full hour and a half. The commentary is rather informative as the two discuss the difficulties of working with an already established product with a new cast, their starts in the industry and more. It is certainly an interesting listen and is mildly comedic and the amount of information provided with this extra-long commentary is something that cannot be found in your standard twenty-four minute commentaries.

Overall:
Fafner: Heaven & Earth is still plagued by a number of issues that resounded within the Fafner anime series, but a few small issues have been resolved to make the experience enjoyable despite these flaws. Returning fans will be eager to see what will become of the cast now that two years have passed and the newly introduced human Festum provides a new and enjoyable plot point. While it may contain some very high quality battles, Fafner: Heaven & Earth resolves a number of problems but still falls short of standing out from the rest of the pack, but not by as much as before.