Imagine if someone was explaining to you that there existed a game with Final Fantasy’s battle system mixed together with Mass Effects dialogue system, along with Borderlands visual style. You would be quite pumped, would you not? I’d wager that you would be. Well, I’m going to tell you why that won’t be the case with Faery: Legends of Avalon.

The game begins with your player created Faery awakening in what appears to be the middle of nowhere. You are greeted by two other Faeries that inform you that the king has had you awakened in this world where humans are no longer believing in Faeries and that he wants to see you at once. This of course was all King Oberons own doing, as he forced the Faeries to retreat into a slumber which allowed the entire world to crumble around him over time. 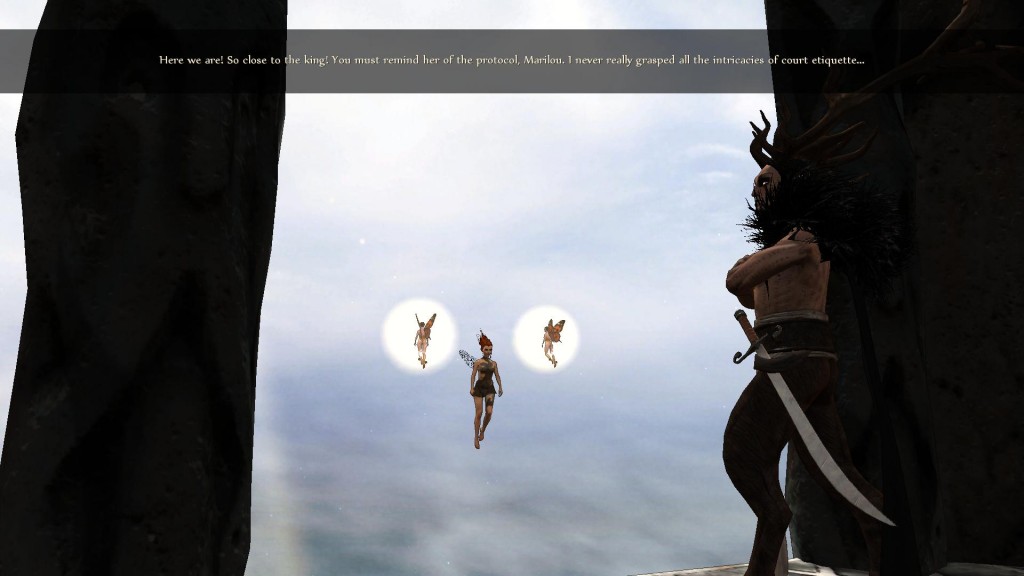 This guy is the King.

The story of Faery is told through chatter between the player and NPCs. It is also told through the players actions within the game, but not too largely. Like, for example, you can influence how much non player characters like you by choosing whether or not to use the bad or good option in a dialogue.

As I stated in the intro, Faery plays very similarly to Final Fantasy in regards to combat. You have one team on the left and one team on the right, with each unit taking turns in hitting the other sides units until one dies. Unfortunately for this game, the battles are too easy and it never feels like you’re risking death. This is because of the obvious weaknesses in regards to spells, as well as being able to choose your fights smartly. Unlike most turn-based rpgs, enemies are visible in the play zone of the game and can be easily avoided if they look like they might be a challenge, thanks to the game giving you a pair of wings to fly wherever you want. 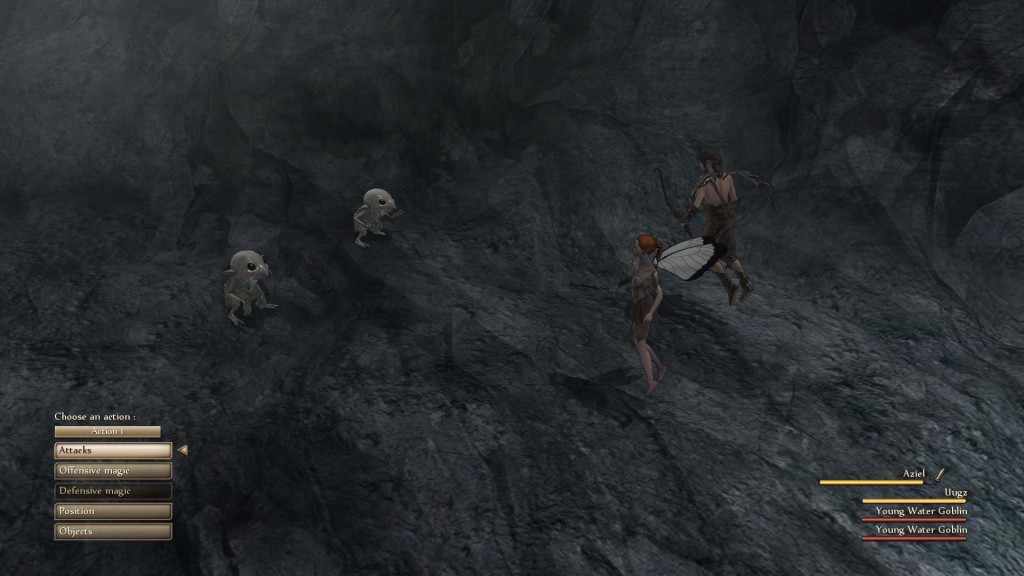 And really, that’s the games main selling point; the wings. Being able to fly across one end of a zone to another end of a zone in a really fast time is something that is really appealing. In this game, the flight replaces the walking that would normally be found in this type of game. So you still need to hover down to the ground in order to collect things and talk to NPC’s. You’ll also find that the majority of enemies also lay along the ground, so flying above them will generally keep you from fighting them.

Though, you will quickly learn that this technique isn’t very effective in dungeons. These are generally located in caves and the like. Dungeons tend to limit the distance in height that you can fly, which can force you into combat with some enemies. While most battles are incredibly easy, it just feels like this was added in to create a longer feeling dungeon.

After battling enemies, you will generally find that you increase your experience which goes towards upgrading your levels and unlocking new skills. So it often works against your favour to avoid battles anyway, though, some you will have to leave alone as they’re not yet balanced for the level you may currently be (or be too low for you to bother taking). 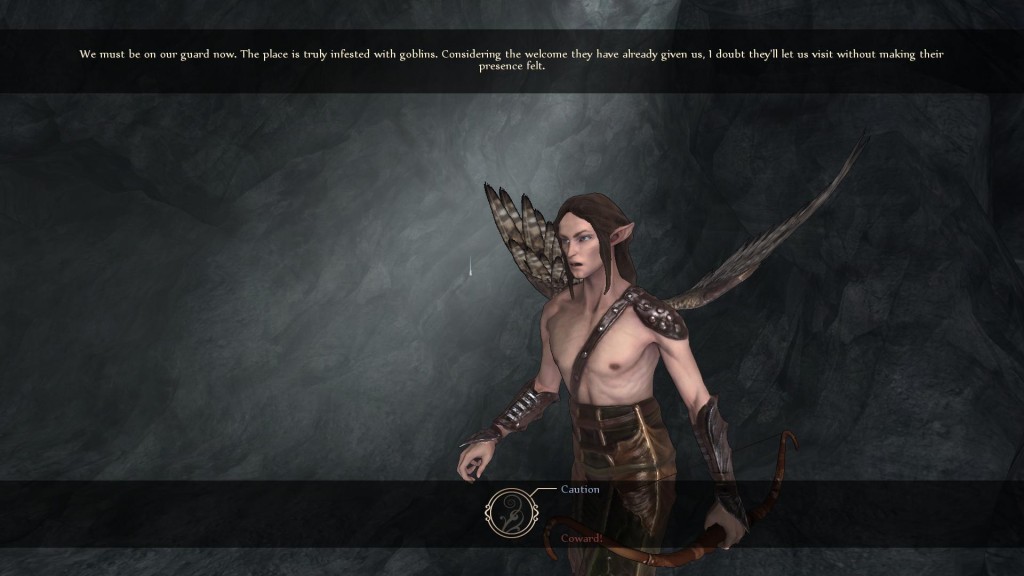 Remind anyone of anything?

The game also has a very easy to learn control scheme, so you won’t find yourself fighting with the controls very often. Along with easy to learn controls are easy to navigate menus and things. You’ll find that the further you go into the game, the more each option will mean to you in each customisation screen.

The last thing I’m going to talk about is the dialogue wheel. This thing is directly lifted from Mass Effect. Like, really directly. While it’s a good model to base a conversation on, I would like to see a little innovation in this area.

This game is not pretty. Not at all. The game gives you a character creation tool because the devs probably realised that their own creations were representations of the spawn-lings of Satan. This normally wouldn’t be a problem (because games like Morrowind had absolutely atrocious modelling too), but the game is called ‘Faeries’; so it’s not unreasonable to expect somewhat pretty looking models. 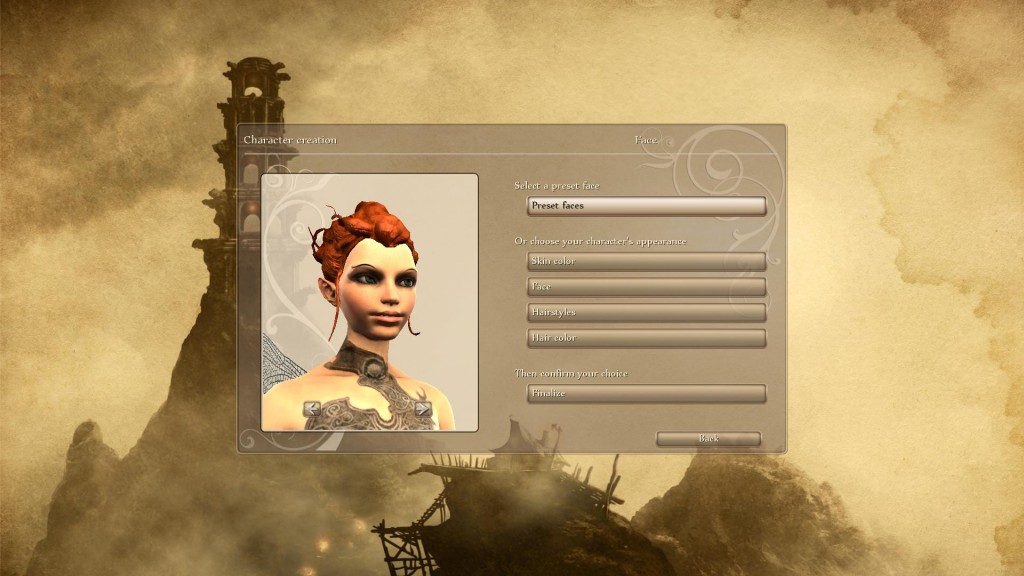 The developers don’t look like they’ve put much effort into player models, or they’ve worked themselves too hard in modelling everything and have included too much that they just couldn’t cope with the amount, so quality degraded. I’m not sure if that’s the actual case, but it is what it looks like.

Outside of models are the effects, and they look effecty I guess. There isn’t really much flash in this game, nor are there any kind of effect filters to make the game seem different visually from scene to scene. It’s just one screen of yuck, to another screen of yuck. Not a very good selling point.

No voice acting and poor musical quality, this game has both those traits.

While I can forgive the lack of voice acting (I think that a lot of games use way too much of their budget in this department and hurt the final product in the end), having a poorly composed soundtrack is one that I cannot.  I mean, why’d they go for a symphonic soundtrack? They could have saved a tonne on utilising a midi soundtrack (did you know that most Zelda games run on this format?) and maybe had a much better sounding end result too. But regardless of the recording levels, if the composition is terrible, so too will the soundtrack be. There just wasn’t enough dynamics in the battle themes, nor was there enough memorability or effective composition in the overworld. 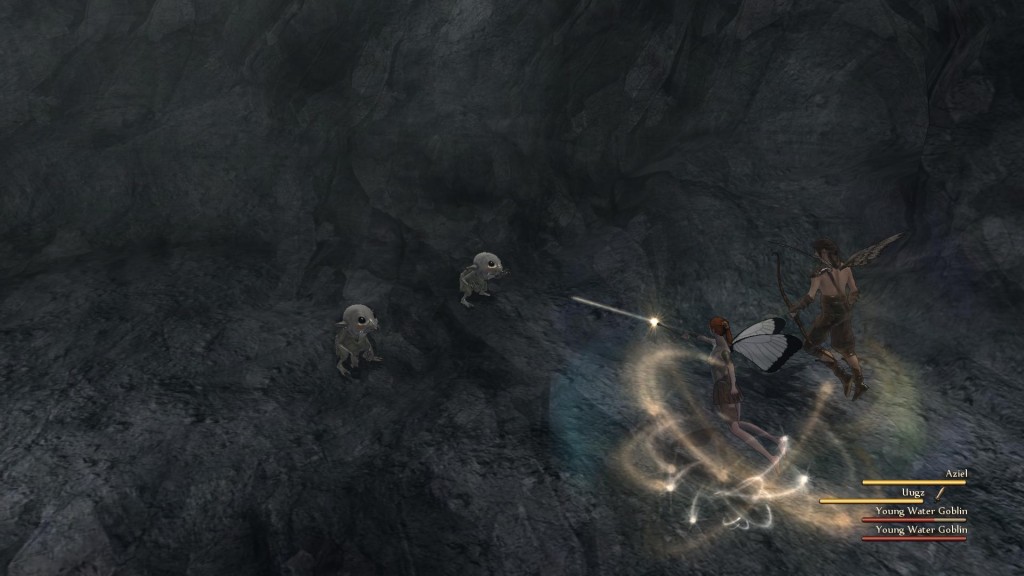 The attack/weapon/magic effects aren’t anything special, but they do their job at letting you know that something is happening while accompanying the visual effect of what’s happening.

Faery: Legends of Avalon is a RPG with turn based elements and a conversation wheel like Mass Effect. What isn’t as fun as however, is Mass Effect or Final Fantasy. If you’re the type of player that looks for fun in their games, you will want to avoid this title. However, if you’re the kind of player that loves being made to enjoy horrible and mind-numbing boredom, this game is the perfect match for you.

As an independently developed game, I can understand the budgetary limitations and man power limitations, but those could have been circumvented simply by adhering to a couple of the things that I touched on briefly in the above post. At best, this game can be used to entertain small children or as a tool to explain role playing mechanics of other games.