Face Pilot: Fly With Your Nintendo DSi Camera! is a flight simulation game which takes advantage of the Nintendo DSi’s built in camera.

Story
There is not a story in Face Pilot. You are a hang glider pilot and you move through various stages to accomplish certain goals. Each stage is made up of five objectives which you complete while earning medals to move forward in the game. Objectives include popping all the balloons in the stage, flying through certain hoops and hitting targets and many more other timed challenges. 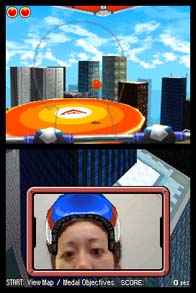 Gameplay
Within the gameplay of Face Pilot lies many different areas. The first thing you have done is have your picture taken and it is pasted on a pilot of a hang glider. On the bottom screen, you will see your face with a snazzy helmet. As you move face, your pilot will move in that direction to give the flight simulation experience. Everything in Face Pilot is motion controlled with the DSi camera. How does this work out? Well, it’s kind of complicated.

Face Pilot gives two options of gameplay. The first in my opinion is much easier to use, and that is the table top gameplay where you sit your DSi on a flat surface 20 inches or so from your face and just move your head in the direction needed to climb up, dive, or turn left or right. Just simply sitting still will move you in a straight-forward direction.

This game requires patience and a nice setting in the background as at first, my white walls were clashing with my skin color and making detection of my movements error out quite a bit. Once I got in a proper setting, the game started to really take off. Every movement you make in Face Pilot is detected as you fly around through various stages. Popping balloons or going through targets is simple and actually quite rewarding. I didn’t notice any discomfort really as I thought that might be a factor due to the constant movement you must use with your face. You must stay within the camera or you will crash over and over. It can be a bit frustrating if the camera doesn’t detect your movement and your sent into a cliff. 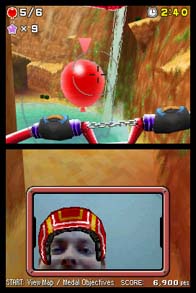 The other way to play is handheld mode, where you mainly tilt the DSi to control your pilot. You still use your face, but instead of moving your head, you tilt your DSi to move your pilot in the direction needed. For me this mode was much more of a hassle and did not really work too well as steady hands are needed. I am glad that Nintendo incorporated both types of gameplay as each person who plays Face Pilot can find the mode that best suits them.

Graphics/Audio
As far as the graphics go this game does well with areas ranging from canyons to cities and other colorful 3-D environments. I can best compare this to Wii Sports/Sport Resort in many ways graphic and feel wise. Being up in the air while using the motion controls, it is important to have an environment that captures the true essence of flight for your hang glider. Face Pilot accomplishes this with no problem though and will make you feel like you are soaring through the skies in no time with the textures and view from the sky.

The audio was spot on. The sound effects from rushing waterfalls to the wind and other environmental noises really put me in the game. I also really enjoyed every tune that was played in the game. The music is really relaxing and goes perfect with your setting. Good music really isn’t anything new for Nintendo titles, but it was a pleasant surprise to see the quality HAL and Nintendo brought to the soundtrack for Face Pilot.

Overview
If you can get past the learning curve and complex and not always accurate way Face Pilot controls, I think this game is well worth the 500 Point price-tag. Face Pilot brings a whole new use for the DSi camera and can be rewarding and relaxing if you give it a proper chance. The music stands out above many other DSiWare games and I think that was worth the price alone and gives it a bit of the old Nintendo charm. Overall, Face Pilot is an innovative yet somewhat flawed experience but patience and having a proper playing area can lead to making the title shine to it’s full potential offering quite a bit of fun and unique experience.

I give Face Pilot: Fly With Your Nintendo DSi Camera!