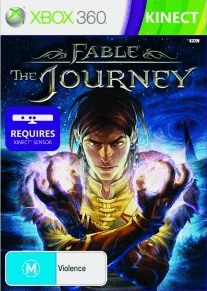 The gameplay premise behind the original Fable game was ambitious: to create a game that unlocked limitless, unrelenting possibilities, where no two play-throughs would ever be the same. Sufficed to say, the original claim was vastly exaggerated, but it did not deviate from the fact that Fable 1, and the subsequent expansion Fable: The Lost Chapters were genuinely epic games that provided very unique role play experiences. Fable has since prided itself on its system of choice and consequence, and made the series one of the best selling exclusives on the Xbox and Xbox 360. However, the subsequent sequels to the original epic have been greeted with greater and greater levels of disappointment from fans for each successive game released.

Fable has started to become one of those franchises where the players aren’t sure whether they love it, hate it or just shrug at it with a colossal degree of indifference. It was during Microsoft’s 2011 press event when the latest instalment in the franchise: Fable The Journey was announced, with the news that it would be a Kinect devoted title. This revelation was met with no shortage of groans of disdain from viewers around the world, as the Kinect was being increasingly shunned by the gaming masses. Now, in 2012, Fable The Journey has hit the shelves of game stores around the world. There’s no doubt that the odds of receiving a favourable reception from the masses is stacked against it. So how exactly does Fable The Journey hold up in an increasingly sceptical market?

Fable The Journey does quite a number of things differently from the previous titles. First and foremost is the omission of the controller in favour of the Kinect system. This both drastically changes the way the game is played and experienced, but also isolates the playership to only those who already own the camera attachment. Interaction with the game is performed primarily through hand gestures. It comes as a small mercy of sorts (when compared to other Kinect titles like Star Wars), that the whole game can be played from the comfort of your seat, eliminating the need for the Kinect’s standard repertoire of “gimmicky jump” quicktime events and “step-left-step-right” mechanics. 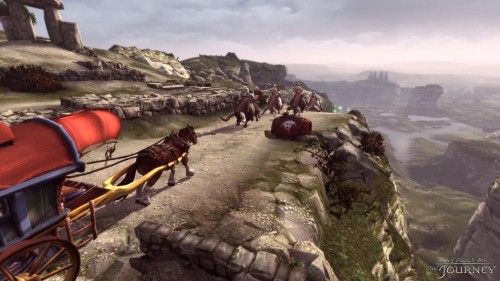 Unlike its predecessors, Fable the Journey is the first of the Fable franchise to utilise a first person perspective. A majority of the gameplay time is divided between horse riding and magic-based first person shooting. The former section is about as interesting as it sounds, though many players will find themselves getting surprisingly immersed when it comes to the movement of the horse and carriage. However, for most players, the REAL game is to be found in the first person magic sections.

Using both right hand, left hand and voice controls allows players to cast and scroll through a small library of available spells to do battle with many of the iconic Fable enemies such as Hobbes, Hollow Men and Balverines. Players generally control Jedi-like push, pull and shield abilities with the left arm, while the right controls offensive spells, like bolt and fireball. Voice commands are efficiently reactive when it comes to spell switching by a simple mention of the spell’s name. It’s not quite as tactical as saying “Garrus, overload!” or as epic as shouting a “FUS-RO-DAH!”, but it works. 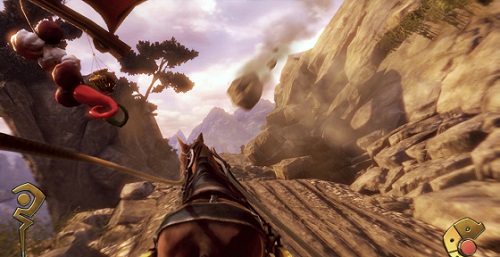 These gameplay sections are broken up by mini-games accessible in a rest stop. It is in these intermission areas where the player can help tend to their horse’s wounds, feed it, find treasure, and even do a little smithing. Again, the Kinect directs actions such as pulling down an apple and holding it out to your horse. And I guarantee that no player will be able to open a chest without holding their hands above their head Zelda style and saying “Da-na-na-naaaah!”

Now for the million dollar question of any Kinect game. Do the controls work? Surprisingly: Yes. Unsurprisingly: Just barely. While the defensive and voice commands of the game work very well, there are aim issues to be had with the right hand spell casting, and reaction issues with the horse controls. Early on in the game, the player is made to calibrate their aim by flinging bolts at all corners of the screen. However, there will be many instances in combat where a spell flies exactly where you don’t need it. While a provision has been made in the form of the aftershock ability (which lets you redirect a wayward bolt), the simple inclusion of a targeting reticule would have eliminated this problem. Without a targeting system, many shots are liable to be directed by chance, or auto-aim. On that note, it should also be said that the game isn’t particularly challenging. While difficulty can be scaled appropriately, it just feels like the much of the game is just designed to be passed, with the player having to rely on the accuracy of auto aim when enemies get up nice and close. When they’re directly in your face, you can’t miss, and even this is a problem if you’re trying to use the grab spell on an object in the background. It’s nothing that makes the game unplayable, but it relinquishes a large sense of control. And for an RPG series, that’s a significant drawback. 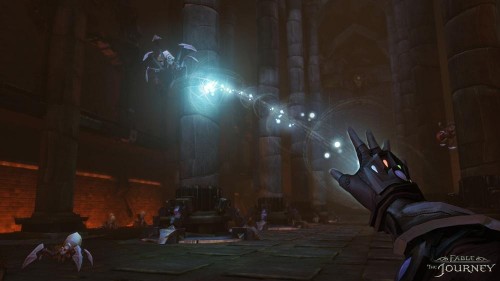 Another significant change is the absence of a personalised and mouldable hero. Remember all those nameless traders that wandered around Albion who your old hero occasionally led around and sacrificed painfully at the Chapel of Scorn? Well, that’s you this time. Players take on the role of Gabriel, a young man that lives and travels with a large convoy of travelling merchants. Gabriel is something of a loner and scoundrel within the convoy community (probably a result of you sacrificing his parents in a previous game.) It isn’t long until he ends up accidently separated from the convoy, and he comes across a Theresa, the same blind seer responsible for every Fable plot device for the last 3 games. Recall that dark force you killed in Fable 3? Not dead. It’s back and it’s angry. Gabriel soon finds himself embroiled in the conflict, having to undertake a dangerous journey to find a means to defeat the darkness and preserve the land of Albion.

For all the plot’s predictable turns and overused idioms, it’s nice to see a Kinect game that is as heavily story driven as this. It’s difficult to say whether this game’s story is only strong because of the lore established in the previous games, or if the game is doing a genuinely good job at preserving those stories. Nonetheless, if you’re a Fable fan, it’s certainly interesting to hear how Albion has changed in the space of another 50 year absence. 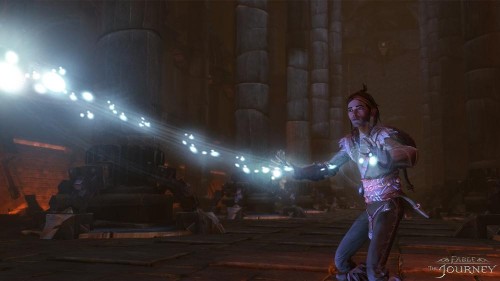 True to Fable form, the writing and voice acting work of Fable The Journey carries over that same British style of Monty-Python-esque humour that was so prevalent in the previous titles. Obviously the appeal of this is individual, but I will admit that many of the jokes seemed stale, and rarely got more than a “Heh” out of me. Regardless, the voice roles are well spoken and delivered. The musical score features a similar manner of folkish tracks that are so iconic in the Fable universe.

The visuals of Fable the Journey are the best looking yet. Character models have lost a lot of the gritty realism that was thrust in our faces in Fable 3 in favour of a graphic style that seems more reminiscent of Fable 1. Brighter and livelier colours are featured in much greater detail that any game before it, providing a real sense of fantasy and allure in some situations, and a feeling of dread or adrenaline in others. 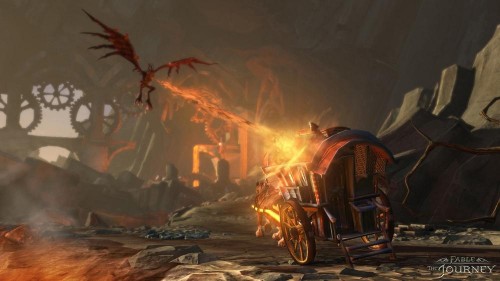 Remember when Peter Molyneux said that Fable the Journey isn’t a rail shooter? Well that was an exaggeration because the game is almost entirely on rails. Choosing to go left or go right in a horse riding section doesn’t mean a heck of a lot if you end up in the same destination regardless. Although the story is quite linear and predictable, the fashion in which it is told is done with surprising depth and detail. Make no mistake, this isn’t a Fable 4. The storyline is shorter, and the replay value is nothing like the RPG equivalents, but it certainly does provide a unique and well thought out experience. While the Kinect’s controls are surprisingly well adapted, ultimately this is going to be a game for the fans that already love the franchise and want to delve deeper into the land of Albion.