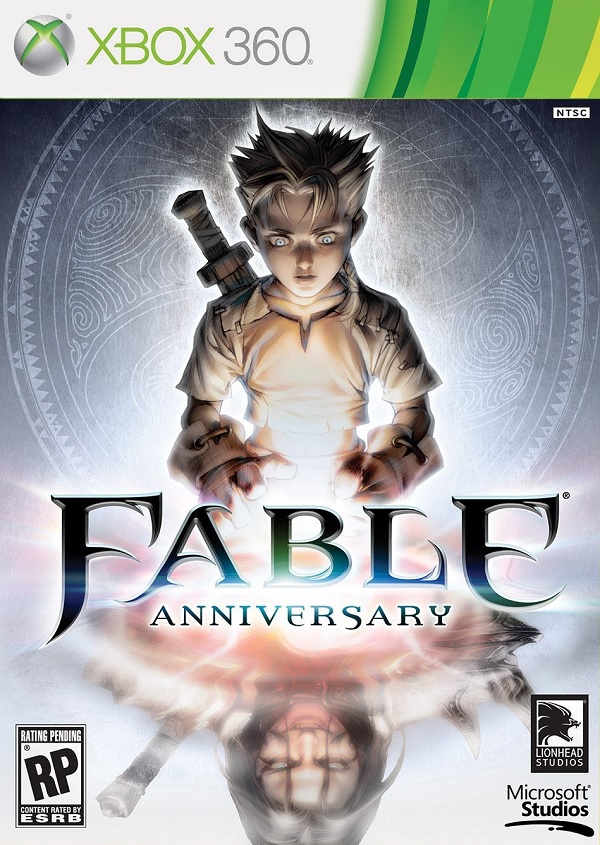 Overview
Since being released in 2004, Lionhead Studios’ Fable franchise has seen two numbered sequels and a handful of spin-off games. Now a decade after the first game was released on the original Xbox, the game that started it all has come forward with a new coat of paint to remind gamers how the series started. Despite initial rumblings over Peter Molyneux’s extreme promises not coming true, the original Fable was one of the best games on the original Xbox so does Fable Anniversary stand the test of time?

Story
Fable Anniversary’s storyline remains unchanged after all of these years and while some people might know what to expect there are two types of people who may come into the game surprised. The people who were still very young when Fable was originally released and never played it before, or those that played the game so long ago but have since forgotten about what most of the game’s story had to offer outside of the very basics.

As such, Fable Anniversary follows the story of a village boy living a peaceful life in Oakvale with his father and sister. On a day that his mother was to return home, disaster strikes Oakvale as the village is raided by bandits that slaughter the inhabitants of the town. With his father dead and his sister and mother missing, the boy is saved by an elderly hero named Maze who spirits the boy to the Heroes’ Guild, a place where heroes are trained in the ways of the sword, bow, and will (magic). 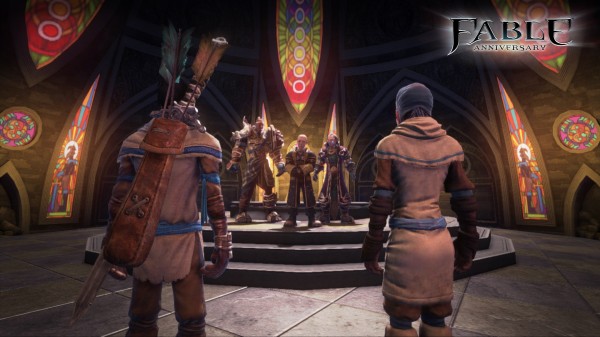 From here, the boy grows into a man with the potential to become a hero and is set on a course that will see him facing down enemies of his past and darker forces than he could ever have imagined. However will this hero choose to be righteous or will he put the worst villains in history to shame? That is the major set-up for Fable as players are free to make a number of decisions throughout the game’s storyline, as well as accept certain quest types from varying employers, that will either be seen as Good or Evil.

Unfortunately while the hero’s appearance will change depending on how good or evil he becomes and the way the populace reacts whenever you walk past depend on your actions, there really is no long lasting affect from your decisions. Choosing an evil option will usually elicit a slightly different telling of your tales by the townsfolk compared to a good choice. These acts do slightly alter the telling of the story, but only a very small amount though players will probably want to try out a completely evil path and a completely good path for the sake of variety. 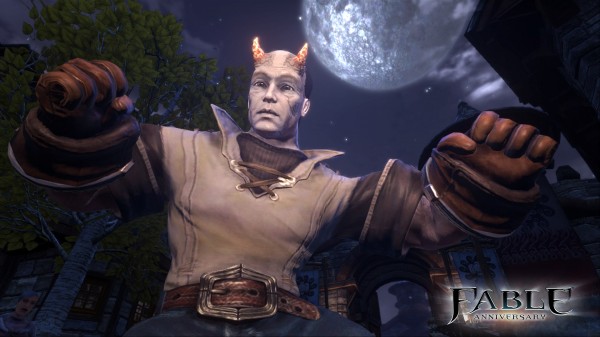 All in all, with the addition of the Lost Chapters adding a nice bit of content at the end, which was something I never had touched before despite loving the original, Fable tells a concise but expansive story that sees the player traveling the land and facing off against all manners of foes. Many characters players come across will fall by the wayside as they are usually forgettable but there are a number of memorable ones all the same and then there are those the player can choose to remember if they follow various side-quest paths. Despite the limited nature of the storyline decisions the player makes, Fable Anniversary continues to give players the freedom to do what they want outside of the storyline and make their own unique experience.

Gameplay
Those of you who played the original Fable probably remember that while the control scheme for combat was alright, it was extremely bothersome. Of course that option is still there for players wishing to choose the ‘legacy’ control set but the combat system has been reworked to work similar to the more recent Fable titles, with dedicated attack buttons for melee, ranged, and magic attacks. This makes combat a lot more fluid than the original as players can easily wade into combat, retreat with the bow, or use magic spells, of which there are numerous types to choose from, to suppress enemies better than ever before. 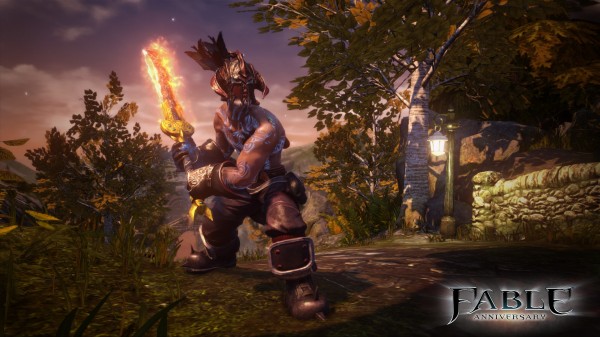 Players will earn four types of experience that can be applied to skills. Base experience points dropped by defeated enemies, and three types of attack based experience that is accumulated whenever blows are struck with a specific weapon type. Herein lies the importance of the combat multiplier, a meter that increases in number the more the player deals out damage and avoids getting hit, as the higher the combat multiplier is the more weapon experience they will earn to then distribute into becoming more skilled.

Of course while fighting enemies, players will occasionally find themselves on the receiving end of attacks and these can be either blocked or dodged with a rolling mechanic. However there are a number of annoying tendencies that remain in the game’s combat system, one of which being enemy attacks that tend to lock players into a multiplier destroying combo attack and the other being the game’s dated lock-on system. Players can choose to lock onto the closest enemy with the left trigger and swap between enemies with the right analog stick, but the game often either forces the player to look away from the fight, lock onto a distant foe, or lock onto a friendly character in the midst of the combat, occasionally causing the player to kill an ally thanks to the shoddy system. 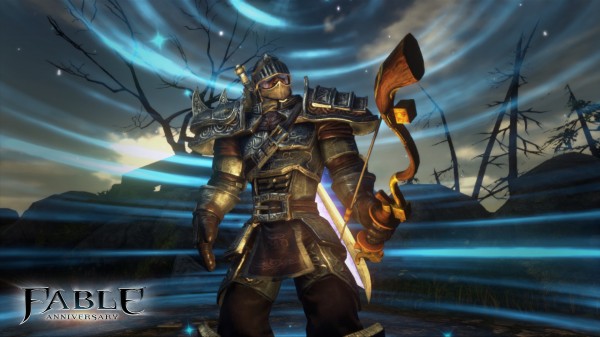 That being said, Fable Anniversary remains a relatively easy game, especially with the newly revamped combat system. Of course it is worth noting that considering the nature of Fable’s experience system, grinding for experience is recommended but not entirely necessary to advance through the game. This is because players can carry large numbers of instant healing potions and rapidly healing food items with them and these can be used with a quick left tap on the d-pad. If the worst should strike the player, they can also carry up to nine resurrection potions which will immediately resurrect them. It is also possible to save at any time, though occasionally the game will only save to your last checkpoint, making difficult decisions and fights easier than before.

Another touted feature of Fable Anniversary are the revamped menu systems which have been given a bit of a face lift but still remain a chore to slog through. There are a number of sub-menus to be navigated through to look at the smallest detail, which is something that should have been refined more.  There are also achievements to be had for the first time in Fable and in pure Fable fashion; many of these achievements come with jokes either poking fun at the franchise or something similar. 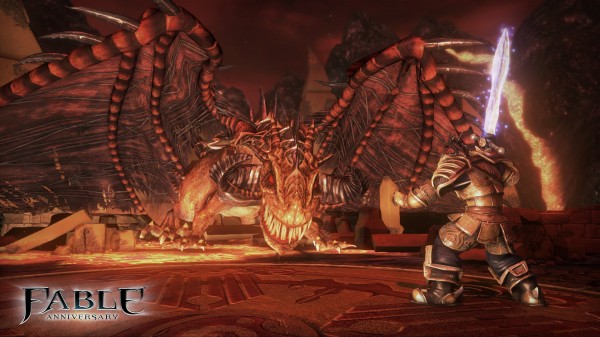 Smartglass functionality is also implemented and constantly shown whenever the game starts up to remind players about the feature. Smartglass for Fable Anniversary provides pre-upgrade screenshots from the original game whenever the player is in a new area and various character bios. This is a nice little addition but far from mandatory or required to enjoy the full game.

Visuals
Now the biggest part of Fable Anniversary is how it is meant to improve the way the game looks over its decade old counterpart and boy has Lionhead done a great job on this aspect. The game looks incredible compared to the original with all of the character models, environmental objects, nature textures, building textures, and even weapons and armor receiving a significant upgrade. Spell effects are impressive to witness and since the environment has been revamped, the world of Albion has become quite gorgeous over the last decade. 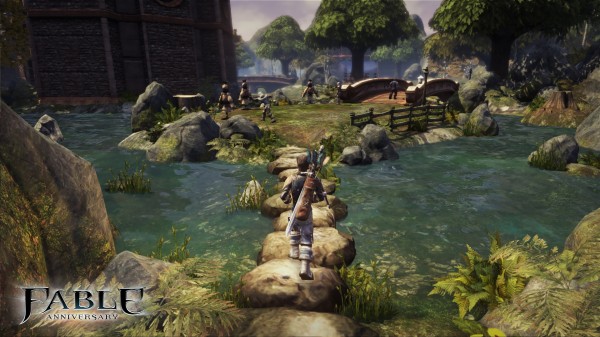 That isn’t to say that things are all great however. There are a few instances where characters will look extremely odd, especially at the start of the game where children are mostly the focus as the face models for these children can be rather scary to look at. There are also some significant frame rate issues at work with Fable Anniversary with the game slowing down with too much action happening at once and there are instances of the game’s textures popping in and out during cutscenes. It is also worth noting that throughout my time playing the game, the title had a tendency to freeze on multiple occasions on two separate consoles, one with the game installed and one without.

Audio
As far as the game’s soundtrack and voice work are concerned, Fable Anniversary sounds the exact same as the original but that really isn’t an issue since the original was amazing in this regard. The background music as the player ventures through the various environments is fitting and enjoyable while the voice actors in the game range from humorous British sounding characters with cockney accents and those that can deliver serious dramatic speeches.

Overall
Fable Anniversary takes what many gamers enjoyed so long ago and has made it better by reworking a few of the gameplay mechanics to flow better and giving everything a nice graphical upgrade. That being said, the title does show its age in a number of problematic areas and suffers from slowdowns and freezing problems. Even with those issues, Fable Anniversary still offers a highly enjoyable, and often funny, addicting experience that players will find themselves sinking hours into just like they did ten years ago.