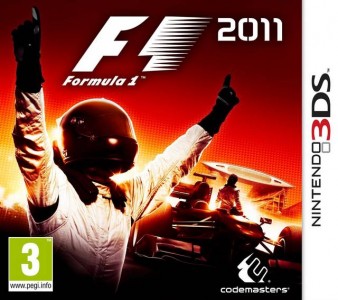 Overview:
The sound of engines roaring, fills the skies, injecting all those who hear it with a heavy dose of adrenaline. That is the spirit of racing, the excitement of it all. Witnessing these powerful machines going head to head with only one coming out victorious.

F1 2011 for the Nintendo 3DS, is a realistic racing game that attempts to capture that spirit, but unfortunately falls incredibly short, to the point that those roaring engines become droning motors, emitting a cloud of smoke that intends to cover up the disappointment this game truly is. 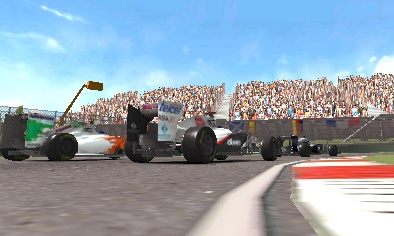 Gameplay:
F1 2011 is a straight up racer that aims to provide the real to life experience of Formula 1 racing. While it manages to accomplish that to some extent it still fails as a whole to comprise a good game. With a plethora of gameplay problems F1 2011 is permanently stuck in the pits.

While the game manages to feature a decent amount of game modes to choose from, each of them essentially boil down to the exact same thing. Never before have I played a racing game that’s Time Trial mode feels no different than a normal race. If F1 2011 achieves anything it is in the fact that it makes one game mode appear to be several other modes, while actually not being any differing what so ever.

Besides the small trivial difference between modes, they are all essentially the same thing – generic, bland, repetitive and tedious. The game offers no incentive to continue playing it, with no real customization or interesting unlockables, there is literally no reason to play on in F1 2011.

What makes matters worse is that it controls so poorly. There is no way to properly steer your vehicle without winding up off the track or spinning out. The thumb stick is way too sensitive and adjusting it in the options menu is futile, as regardless of what sensitivity you put it on, it never truly feels right. There may be two control schemes but both just don’t quite work and are ultimately uninspired.

There are also several portions of the game that are completely broken. Such as the AI which instead of acting like real drivers, insist of crashing into you at every chance. While this may be not too big a deal in any other game, in F1 2011, getting hit by another vehicle usually means you will be sent into a spin, losing all momentum you had built up. To add even further insult to injury, after one occurence of being spun out I was slammed by four other cars which sent me flying through a wall and into the crowd, with no way of escaping this glitch besides pausing the game and quitting the race.

There is so very much wrong with the gameplay in F1 2011 and that extends even to it’s terribly dead online multiplayer mode. In the very few matches I managed to encounter online after spending a long period of time searching for a match, I had to deal with an incredibly laggy race that resulted in the other player dropping out on me, leaving my car in perpetual lag.

All in all, there is a great deal of severe problems with F1 2011’s game play that kill the experience dead in its tracks. What could have been a good game is ultimately held back by a lack of attention during the creation process. If more time had been spent ironing out the kinks, F1 2011 would’ve been a much better game for it. 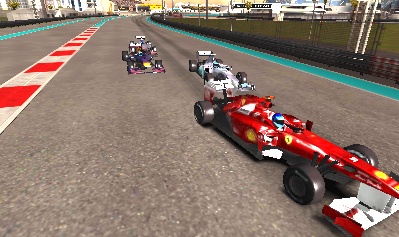 Visuals and Audio:
Aesthetically F1 2011, does not make the grade expected of the Nintendo 3DS. The game looks like it should be on the DS not the 3DS, with spotty graphics and models that look as blocky as they come and horrible frame rate on top of that. It is simply not acceptable for games to look this bad with the power improvement of the 3DS over the DS.

To top it all off, the game features what is easily the worst 3D experience the console has had to offer. It provides no added depth to the title and in fact proves to be more detrimental than anything. Instead of actually being 3D, the game just pushes your vehicle towards you, with everything else simply looking far away. It actually makes things harder to see and does not do this technology justice by any means.

The game’s audio does not fare much better. While the game features some actual music in the menu screens, the actual races themselves feature nothing but the sound of engines droning over and over and over again. It is without a doubt the most irritating thing they could have possibly done and well they went ahead and did it.

If you haven’t torn off yours ears by this point, you would have surely punched your 3DS into pieces It is that grating on the nerves. I honestly do not see how they thought it was okay to repeat the same annoying sound effects each and every race. If only they could put a music track on races, it would atleast be tolerable, but no, were given the silence of the engines. 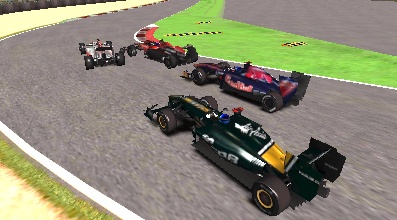 Overall:
In conclusion, F1 2011, is an utter disappointment that can’t be considered anything but a mess in every aspect of gaming. There is very little here to like in F1 2011. To repeat my sentiments from earlier, it is generic, bland, repetitive and tedious. It’s just about everything that isn’t fun and in all honesty, if a game isn’t fun then what reason is there to play it?

If you are a fan of Formula 1, you may want to check this out simply out of interest in F1 racing. But if you are looking for a solid racing game on the 3DS, this is not the game you are looking for. Unfortunately F1 2011, fails at providing even the most basic expectations of a video game and sadly that’s all there is to it.