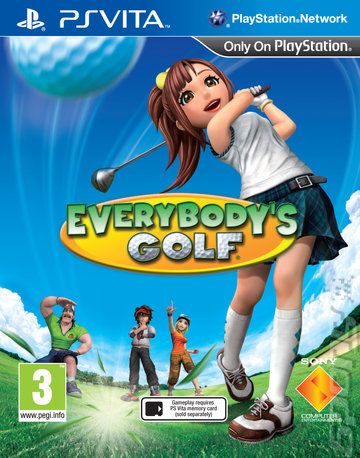 Also known as Hot Shots Golf: World Invitational, Everybody’s Golf has a reputation for showing up on every new piece of Sony hardware somewhere around launch day. The PlayStation Vita is no exception, and despite the fact that Everybody’s Golf is perhaps a bit more low key than titles like Uncharted Golden Abyss, it should still be considered something of a big hitter. No matter what your previous relationship with sports games, Everybody’s Golf provides a bucket load of content backed up with some whimsical style, and should definitely not be overlooked when it comes to picking out your first few Vita titles.

In this game you can track your stats in every last detail, fly over golf courses to plan out your shots and compete with players from every corner of the globe in daily tournaments. You can unlock a myriad of new players, clubs and balls, and customise their outfits and your own online mini golfer. You can play in tournaments to beat AI competitors in Challenge Mode or against your own merits in Stroke Mode. Your best shots will automatically be recorded so you can watch them again later, and if you’ve improved your perfect impact shot percentage the game will let you know.

All of this is carried off with a perfect marriage of a  bright and breezy cartoon style with realistic gameplay. From the main menu you can choose to launch into six modes: single player, multiplayer, online, customise, shop and data. Single player provides a robust selection of courses over challenge, stroke and training modes, multiplayer allows you to join or create a play room, and online holds the Daily International Tournament, lobby, and online rankings. Customise, shop and data are fairly self explanatory, and host a wealth of options to tweak and unlock for all the characters and equipment, allowing you to spend points earned in other game modes on everything from different balls to background music. 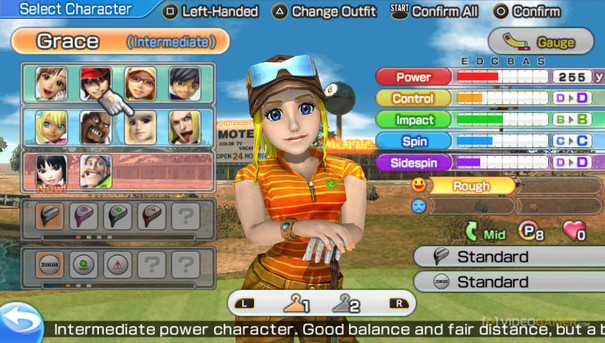 In single player you can enter into challenge mode or stroke mode. Both will earn you points and player loyalty, but challenge mode will earn you stars with every win with which to unlock new players and courses. Difficulties are gradually unlocked, meaning that you have to get to grips with the game before you’re allowed to play against the big boys, nicely limiting the difficulty level whilst also bringing a good sense of achievement and progression to the party.

The actual mechanics behind the golf allow for a lot of customisation and flexibility. Golfer’s have different strengths and weaknesses as do balls and clubs, and there are several different gauges to choose from for playing your shots. All of these options gradually unfold as you play the game and level up, so the vast amount of content on offer never feels like too much at once. Taking a shot is a matter of one push to determine power and another for timing, with direction predetermined by the way your player is facing. Wind and weather all come into play, as of course does the gradient of the land and the club you choose to take your shot with.

The game holds your hand in the appropriate places, making the interface appropriately simple despite being packed with information, and flagging up the optimum distance for your shot on the power gauge. You’ll know how many yards you have to go and the maximum distance your club can hit, as well as the wind direction and when putting, the slope of the green. It certainly takes practice but the difficulty curves smoothly upwards, providing just the right amount of motivation to keep playing. Constantly unlocking new content provides even more of an incentive, and the number of courses is pitched so that you can learn the holes without becoming bored. 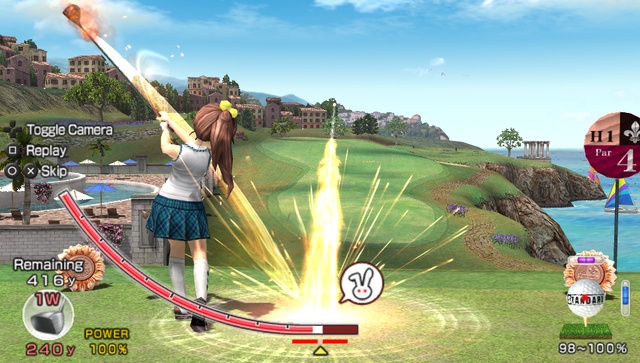 That said, one messed up play in a 9 or 18 hole course can completely ruin your play session, landing you with a pointless second place or a terrible score. It is incredibly easy to make a simple error on hole 16 and end up ruining half an hour to an hour of play, and with no option to restart a hole you’ll have to play through the entire thing again to gain anything from it. It’s unfortunate that simple mistakes are punished so greatly, because it mars an otherwise relaxed and pleasant experience.

And that’s the key selling point of Everybody’s Golf – it’s all in the title. This is an up beat game, one that let’s you savour the details of every set up and shot, the colour of your players hair and the ball you’re using. This is golf without the stifling, dreary atmosphere that often pervades the game for those who aren’t fans, this is everybody’s golf.

The multiplayer adds some great longevity to the game. Every day sees a new International Tournament, allowing players across the globe one shot to face off against each other on a chosen course. As you would expect there’s a ream of stats and graphs that come with it, allowing you see how you;ve improved over the days. It reflects the incredibly extensive stat tracking across the entire game, and provides a constant source of competition when there are no matches available in ad hoc.

The Vita’s motion based control options aren’t really much of a player here, and although you can use the touch screen to swoosh between the multitude of camera angles available there’s no forced use of anything – Everybody’s Golf is all about button controls.

Everybody’s Golf is a lot more of a mixed bag when it comes to presentation. The characters all have a nice splodge of bubbly personality, but the courses and obstacles on them can be a bit on the grainy side. There are a few nice details in there that back up the light hearted nature of the game, but you can’t help but feel that certain objects could have been a bit smoother or clearer – here’s looking at you foliage… 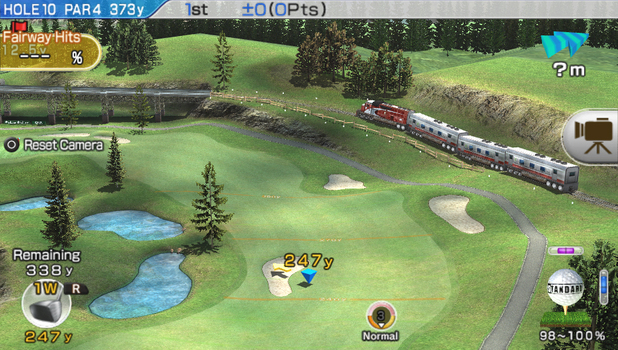 The background music is chirpy and light without ever becoming irritating, but the constant comments of the caddy’s may have you developing a whole new set of rage issues. Menus are easy to navigate and the loading screens are handy mini tutorials, and the screen layout in game manages to provide a shedload of information without ever becoming over cluttered. There are a ridiculous amount of camera options to choose from, which allow you to pan over the entire course or follow your ball from every angle – you can even take a shot from a first person view and follow it using augmented reality, which is a neat if superfluous touch.

Everybody’s Golf comes to the Vita armed with bucket loads of charm, a mountain of stats and plenty of unlockable content. The realistic golf mechanics are backed up by a welcoming dose of light hearted cartoon quirk, and the gameplay is quietly addictive in it’s own way.The kick in the ribs that it gives you for the tiniest of mistakes can very suddenly mar the experience, but in the scheme of things it’s a small blot on the largely green and cheery landscape of Everybody’s Golf. The graphical quality could be higher and the caddy’s can go and die in a fire, but those minor irritations aside this is an incredibly detailed, well built game that deserves a place in your Vita collection.