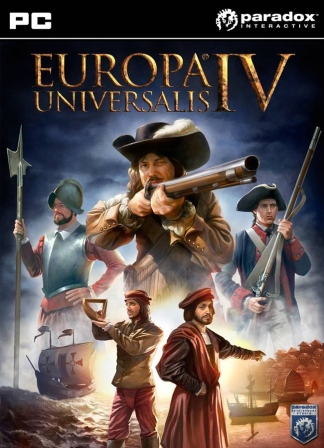 Overview
We’ve all tried our hands at ruling the world. Risk, Axis and Allies, and the Civilization series are only a few drops in the pond of grand strategy games. Most grant you the means of diplomacy, religion, brute force, and more to achieve that goal. That’s where Paradox Interactive comes in. With franchises like Hearts of Iron and Majesty under their belt, they’re no strangers to the genre. So how does their newest title, European Universalis IV, stand in an ocean of strategy? Has it reached the Age of Enlightenment or should it be left in the Dark Ages? Let’s find out. 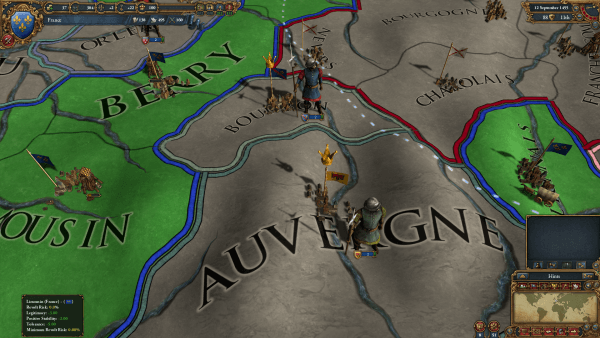 Story
One of the unique aspects of historical games is that you typically recreate a history of your own. Did the way the Ottoman Empire dealt with Portugal always bother you? Control Portugal and rewrite history to suit your whims! The victors write the history books, and the quill is in your hand.

Gameplay
Throughout all of Europa Universalis IV‘s gameplay, players will take on the role of chief decision maker for the nation they’ve chosen to play with. This goes both deep and wide, encompassing virtually every aspect of governmental control and ranging from 1444, with the rise of the Ottoman Empire, to 1820.

When you begin a game, you’ll choose a historical date to start your campaign. Depending on the date and scenario, that can also affect which nations you have access to. Unsurprisingly, most starting dates coincide with major wars in the history of Europe, though a few other notable events are also available.

Throughout the game, you’ll have to manage and balance several forms of currency. Those can include things as straight forward as gold (ducats) and manpower, to prestige and ruler legitimacy, to monarchy powers like administration, diplomacy, and military power. They’re all complex parts to a delicate dance that must be kept in check. 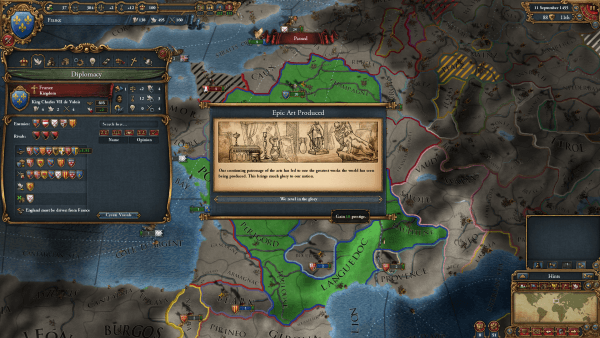 There are also several aspects of growing and managing your country you’ll have to keep in mind at all times. It can be a bit daunting, but the ability to pause the game at any point goes a long way toward helping with that management. The aspects of government you’ll have to keep an eye on include:  Government, Diplomacy, Economy, Trade, Technology, Ideas, Missions, Stability, Religion, and Military.

From a Government perspective, you’ll be able to see who your current leader is. You can also see and manage your national advisors. These advisors contribute to your monarchy scores. Each advisor comes at a price and can be weighed against several other people vying for their seat. You’ll hire up to three advisors – an administrative advisor, a diplomatic advisor, and a military advisor. The advice they give you over time will allow you to make certain decisions and advancements on down the line.

Diplomacy is another aspect you’ll have to manage. You’re given a great deal of options in the way you interact with other countries and provinces. Hate the Spanish? Send them an insult. Want to improve relations with the British? Send a diplomat. You can even arrange royal marriages to help unite your nation with another if you choose. 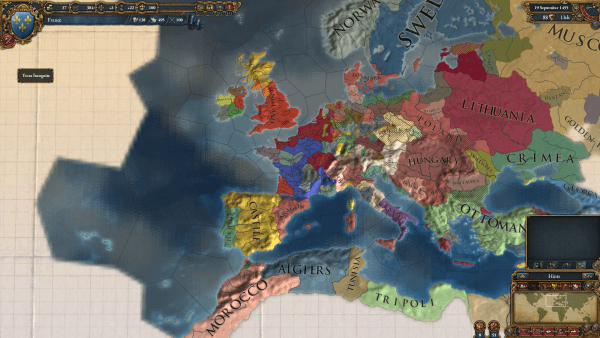 The Economy is an incredibly important aspect of running any nation. You’ll have to decide how to manage and balance out your taxes, whether to take a loan, and more. Difficult decisions lie at every turn, and that’s no different when it falls to you to decide whether to anger the country and raise war taxes or risk losing your vassal’s land to the Portuguese. Also tied in with the economy is the aspect of Trade. You’ll have to handle how you deal with trade. Collect in your ports or have it routed further down the line for more income? You’re hands are somewhat tied, though, as you can’t create your own trade routes. The game tries to stay true to the historical routes that were established.

A few of the most interesting aspects of the game don’t even feel like they tie into the rest of country management in the same way as their siblings. Getting to manage technologies being researched and the ideas your country utilizes from them is a neat twist on things. Don’t feel like your merchant ships are capable of traveling far enough? Research naval capabilities and broaden your horizons. Want better soldiers? Upgrade your army. Researching these technologies can also lead to unique ideas your country can employ to run more effectively or efficiently, and they feel like they have a significant impact on how you run your nation.

If you’re the kind of player that prefers a defined objective, you can choose to pursue a mission from a list. These can range everywhere from “Drive out the British” to “Save the rich of this province!” They provide their own rewards and give you something more defined to accomplish. 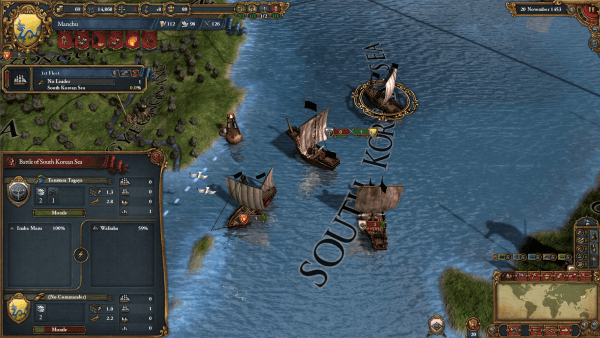 Throughout your land, you’ll have to make sure the people feel like their lives and government are stable. Maintaining stability can be difficult, especially in times of war, but it will help you keep your nation on the right path.

There are multiple ways to conquer other nations. Obviously, you can assemble an army and conquer them the old fashioned way. That requires lots of time and resources – thousands of troops in a skirmish or drawn out siege. It can take a deep toll on your people and leave you vulnerable, too. If you prefer to conquer the hearts and souls of others, though, you can send missionaries in to convert them (if they aren’t already your religion). It can also help reduce the chance of rebellion.

With so many complex aspects to the gameplay, it should come as no surprise that the learning curve can feel a bit impenetrable. Even with the fantastic tutorials Paradox put into Europa Universalis IV, the game can be a bit overwhelming. The two hours it takes to work through the tutorials are time well spent, but it still feels like some more hand holding would have been good for new players. 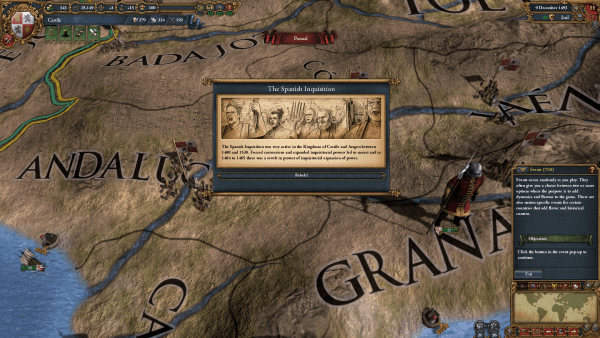 Visuals
The visual design in Europa Universalis IV is solid. A large choice of map options give players a good idea of how each aspect of government is being handled by each nation. Zooming in will reveal the rolling hills, running streams, towns, and cities of the world. The rest of the interface is comprised heavily of menus that drive the game. It can be a bit overwhelming, but ultimately serves is purpose well.

Audio
Europa Universalis IV‘s soundtrack is absolutely phenomenal. Rich, rolling orchestral compositions call out to you, even from the game’s main menu, beckoning you to sit down and play for a little while. The score will get your blood pumping and tune our mind to the game all in one great strike. The sound effects used in the game are fantastic as well. Each clink of metal or creak of a ship evokes a sense of the historical significance and the role in it you’re playing. Overall, the sound design is masterfully done. The game is a real pleasure just to sit down and listen to.

Overall
Overall, Europa Universalis IV is an excellent grand strategy game. It looks great, even if it can get a bit busy with menus, and the soundtrack is so epic you’ll want to leave it running in the background. Newcomers will find the barrier to entry a little steep even with the tutorials, but anyone willing to crest the hill will find a fantastic game just over the rise. The gameplay is intensely deep and involved, giving fans of the genre some rich meat to sink their teeth into. Though impatient gamers may want to pass it by, fans of grand strategy will be able to roll around in this blanket for years.