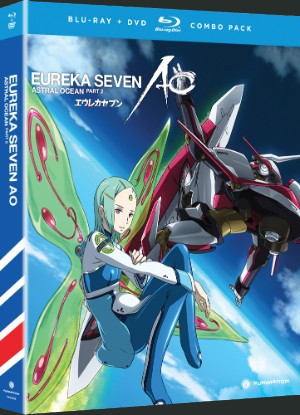 Overview
Eureka Seven: AO Part 1 saw the return to the Eureka Seven story after the series ended years ago with almost all new characters and a very different setting. Starring Eureka’s son, Ao, the sequel series focused on the fight between the humans, Secrets, and the Scub Coral in a world very akin to our own in the not at all distant future. While Part 1 had some problems, such as the stark contrast with the original series, it did provide an interesting plot, even if it just kept piling on the questions of just what was going on. Will Part 2 be able to satisfy all these questions and resolve the problems of Part 1? Or will flounder under the weight of the questions it has already raised? 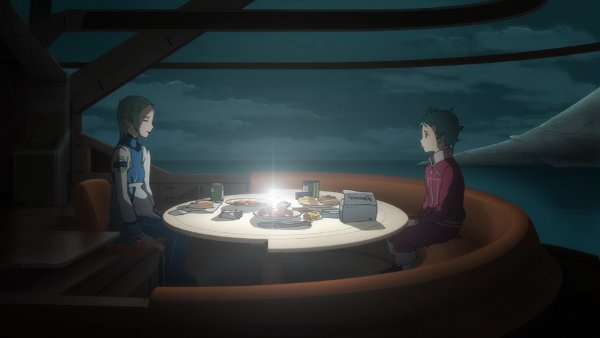 Story
When Part 1 ended Ao had finally been reunited with his long lost mother after disappearing in a beam of light at a Scub Coral 10 years before. Reappearing from a similar beam of light makes perfect sense then and Ao is finally able to spend quality time with his mother eating food rations, fumbling to bring up the fact she’s his mother, and noticing that she is in fact very pregnant. Thankfully, this is the point were the series finally gets around to answering some of its burning questions, such as why is it 2025 when the original series took place in 10000 something. Spoilers, although it should be apparent that it’s time travel, because the story wasn’t complicated enough.

Interestingly enough, when the show finally establishes that time travel is in fact involved they waste no time in setting up self contained time travel logic scenarios, like characters meeting a past version of someone after meeting a future version in the past, which of course creates a nice sense of predestination. With all the time travel mucking about, the plot does finally start answering questions adequately, although some of these are still done ham-handedly. The role of main antagonist changes hands multiple times, in part to one of the most overpowered weapon in anime, but is able to maintain some semblance of progression. Additionally, a lot of questions about the character of Elena Peoples end up frustratingly executed, as it ends up amounting to a lot of misinformation that leads to nothing making an potentially interesting character with hope of development left feeling like a red herring to just complicate matters. 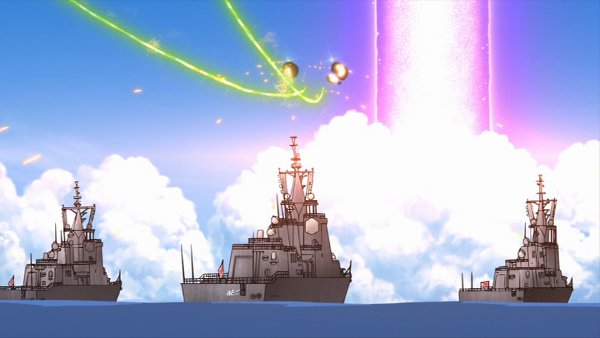 While the questions do end up answered, the story still feels out of place of the original Eureka Seven. Eureka and Renton, after he finally shows up, appear as little more than cameos or plot devices required to link the story presented here to that of the original. It is great to see the return of the characters in an older form to see where they’ve come with the fight in their own world, but they create a unnecessary problems in this world of 2025, although this may be the point. Selfishness creating problems for far more people and ultimately forcing their son to have to clean up it all up, which is actually an interesting concept it only it didn’t take such a long and round about means of reaching it.

The release also includes the OVA “The Flowers of the Jungfraujoch” an alright side story taking place somewhere in the middle of the series that sees Ao and the other two pilots of Pied Piper enjoying a small holiday during a festival in Switzerland as they try to avoid a reporter. While not at all related to the plot of the series, it is a nice look at the relationship between Ao and his teammates, though a little too focused on making jokes about Ao getting dressed up as a girl.

Visuals
The visuals as before are vibrant and colorful from the Secrets that they are fighting to the IFO’s that they are piloting. The new IFO’s that come into the story later also do a great job of building up the bright and sleek look of the show capping off at Renton’s own Nirvash. Plus, the scant few scenes that show the time of the original series do an excellent job in paying homage to the original series, particularly the Eureka and Renton Heart on the moon. 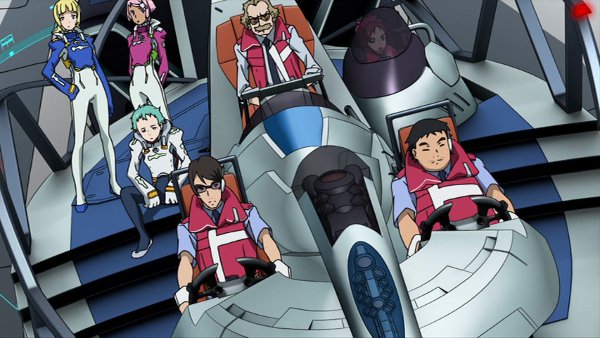 The evolution of the characters design is also handled well within the series, from the older versions of Eureka and Renton to the almost constant changes that occur with the character of Truth. From his origins to final battle, all the changes in Truth both look and feel true enough to his character as he seeks out just what he is supposed to be within the plot. Truth even manages to reach a fairly suitable conclusion despite all the problems and havoc he created, and looks the part for it.

Audio
All of the voice actors from Part 1 continue to maintain their quality of work, but with Part 2 comes the return of both Eureka and Renton who for the most part have their original voice actors as well, with the exception of Renton’s Japanese voice actor who this time around is portrayed by the actor for Holland Novak in the original series. After seven years it is interesting to hear the return of the originals and even better with the addition of their characters ages, creating an overall great effect. Truth’s voice acting is also a great step as it manages to change as much as his appearance, and is able to match it well throughout. 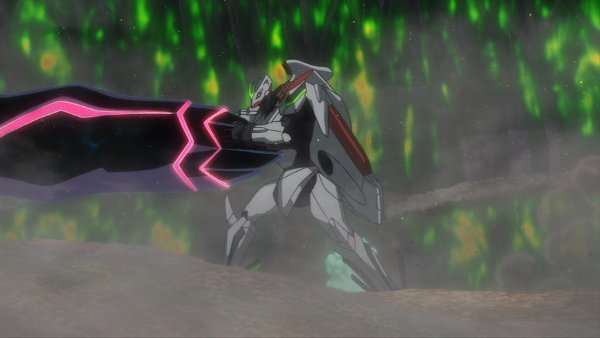 The music keeps up the stride of Part 1 as well, with the amount of action and drama that Ao and the team are forced into facing off against. There are also some great songs used in addition to the opening and closing, particularly around the return of Renton to add some additional emotion depth. The second opening theme, “Blazblue” by FLOW, captures the shows themes of holding onto what one believes in and trying to find a new better world. While the second closing theme, “Iolite” by Joy, plays on the themes of fate and trying to be the person they want to be.

Extras
The selection of special features for Part 2 contains much the usual fare of commentaries, promotional videos, clean openings and closings, and trailers. But, there are some interesting additions as well, that provide a more unique insight. One of the commentaries is actually a video commentary that has two of the voice actors, the mixer, and the ADR director giving some nice insight into some of the processes of dubbing, in addition to having a little fun. Like Part 1, the clean openings actually give multiple versions of the second theme as there were a few changes in it through the progression of the show, a little excessive with how small the changes were, but nice to see for the sake of completeness. The only problem with the special feature is a mislabeling of the ending songs, so that picking one plays the other, but not an altogether major issue. 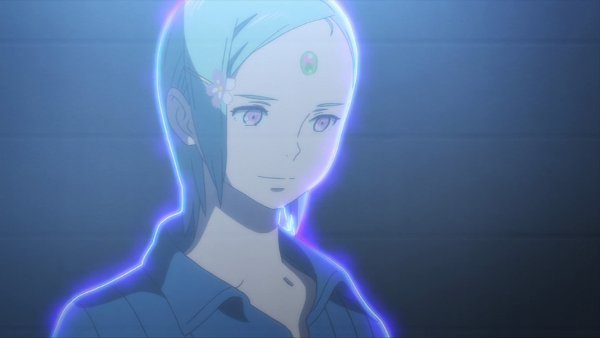 Overall
Eureka Seven: AO Part 2 is actually able to fill in the answers to the questions raised by Part 1. There are still a few problems with the series, particularly in how it handles its many characters, many of which end up under used, but ultimately it is able to create not necessarily a sequel, but sister series to the original Eureka Seven. The visuals still look bright and unique, with the music able to hold its own especially with the additional songs that come into play with the return of Renton. Eureka Seven: AO may have had a rough start and is far from perfect, but is able to create a suitable series with some nice action, style, and conflict.