I came to get down, I came to get down, so get out your seats and jump around, jump around. Okay, enough of the monkey business quoting House of Pain lyrics, it’s time to get down to human business. Escape The Ape is the latest iOS title from Korean developers Com2uS. The game features a little monkey, JoJo, who must jump to escape the lethal grip of a giant ape. Along the way there are bonuses and power ups, but our new simian can’t escape all on his own. This is where you come in.

At first glance Escape The Ape may seem like a typical draw and jump title for iOS, of which there are numerous. However, even before you start to 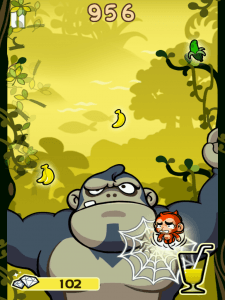 progress deeper into the game and the range of more complex means of playing emerge, Escape The Ape sets its self a head of the others by integrating a story arc into the game. While it isn’t the most amazing tale ever told, it adds a little extra element to the gameplay and gives the game just that extra touch of life. Com2us have expanded the base mechanics of drawing and jumping to include a number of power ups to help JoJo reach new heights. Firstly, which is not all that uncommon, as you jump you can collect bananas as a power up. Eventually you will have gathered enough banana juice to perform a spinning leap into the air, narrowly missing the grasp of the giant ape chasing you. This is not the only way to get a little boost however. Com2uS have rewarded precision in this game. If you perform a perfect, or ‘cool’ jump you will jump higher than normal. Manage to perform three in a row, and you get a combo jump that sends your little simian friend flying off into the sky.

As well as collecting bananas, there are a number of gems to collect on your way up. Gems can be used to purchase upgrade for the trampoline, the banana based energy drink and also the likely hood of getting an advanced jewel. The only downfall here is that these upgrades are a little costly, ranging from 200-500 gems for only the first upgrade. This means that you will be playing for some time before you can earn enough to buy an upgrade. Despite this, it does add that little extra bit of motivation to the title. 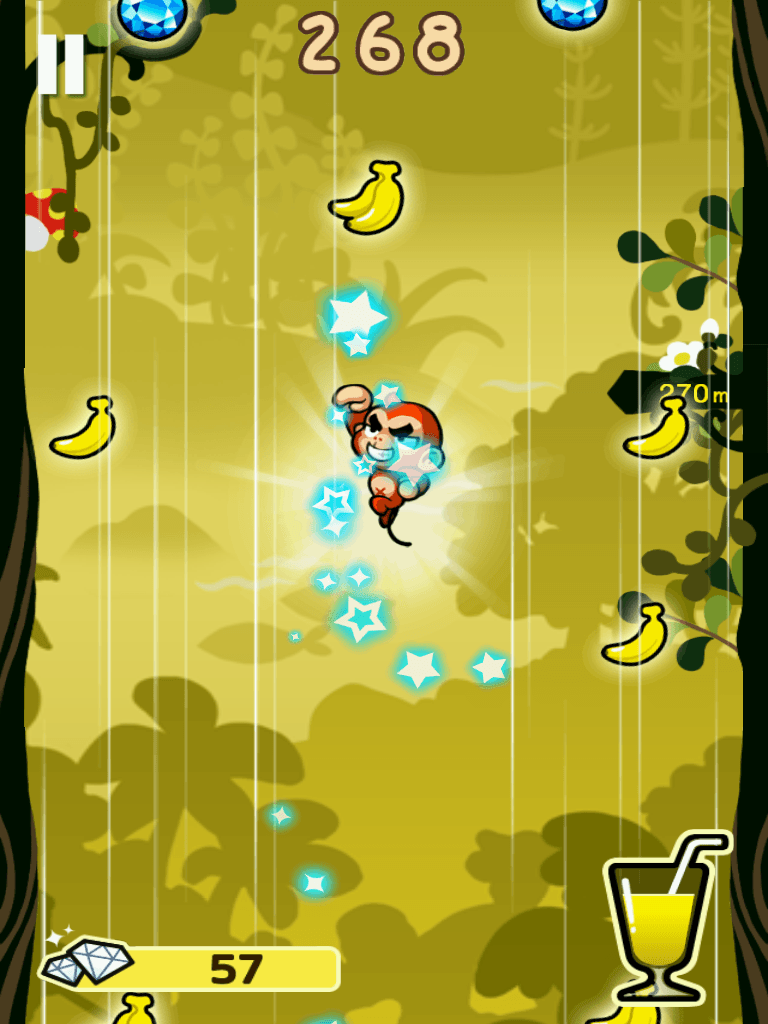 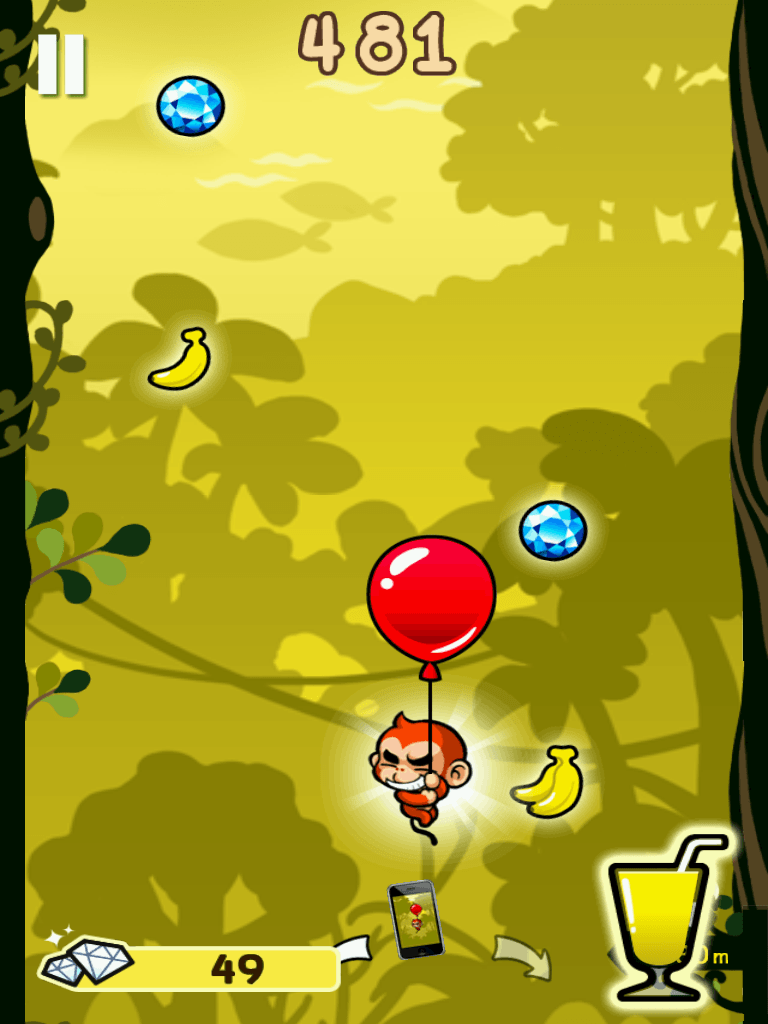 One of the most surprising and interesting features I think is the addition of balloons. Balloons can be grasped as you climb higher, and used to transcend with ease: collecting bananas and gems or even destroying spiders as you float upwards. What is most interesting about this is the change in controls. Rather than using the touch screen to control the balloon, you can tilt the device left or right as a means of moving across the screen as you automatically levitate. While it may seem a little cluttered to mix control mechanisms like this, Escape The Ape pulls it off well. 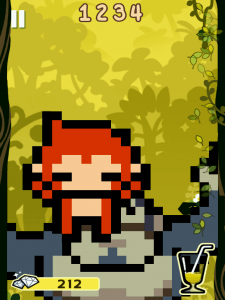 Escape The Ape, as you no doubt may have noticed, has a lot to do with primates. While the villain of story, the ape, is designed in a rather sinister and thuggish style, the hero has a rather cheeky and cute feel to him. Coupled with a simplistic background, and a responsive foreground which features falling leaves when you bump into trees, the game has the feel of an interactive little cartoon. I feel like the audio helps push this idea forward with just a hint of circus music about it. The over the top sound effects of boings and whirls really add to this sense as well. A nice little feature I like that brings the graphical side of the game back to typical video game representations, is after collecting a lamp, the monkey will transform into a giant pixelated version of itself. So too will the ape. The best part is, during his minimalistic form, the monkey is now invincible.

Escape The Ape adds some new and interesting elements to the draw and jump formula of iOS gaming. While the main goal is to just endlessly jump, the game makes some innovative ways for you to soar to new heights. While Com2uS have done a good job trying to keep the their title from growing stale, as many others similar to this quickly do, by adding in obstacles such as spiders or green bananas, Escape The Ape is still just a small casual game. Honestly though, for 99c you don’t expect a high level of innovation, or to invest hours of your life into it. The only downfalls of the game would be that it is at risk of being short lived, and that the price of upgrades are a little too high for a casual game that you may not play religiously. Other than that, Escape The Ape is everything you need from a casual game, featuring simple yet charming graphics and an entertaining range of audio elements.