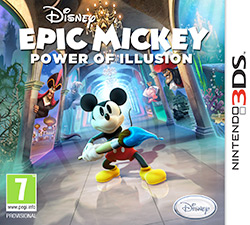 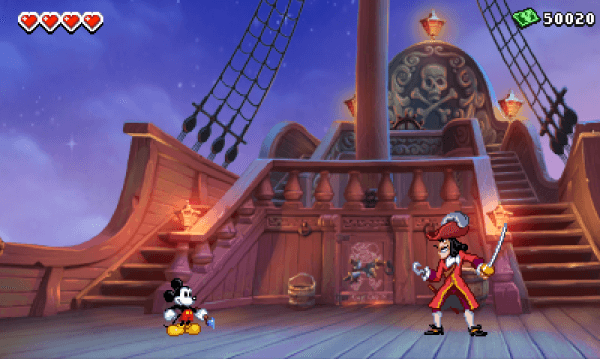 As the Disney song goes, “When you wish upon a star, Makes no difference who you are. Anything your heart desires, Will come to you.. If your heart is in your dream, No request is too extreme…”. One wish long-standing gamers though was too extreme, though, was for a sequel to Castle of Illusion Starring Mickey Mouse, yet all these years later those who dared to dream got what they wanted. DreamRift has come out with a sequel of sorts to Castle of Illusion which adds gameplay elements from the Epic Mickey games, Mickey Mouse’s modern day gaming exploits. But is it any good?

According to the developers the story follows on directly from Epic Mickey 2: The Power of Two. Mizrabel is up to her old antics and the Castle of Illusion is back as she attempts to trap the population of Toon World for her own evil devices. Disney characters good and bad have been sucked into the spell and as time passes their presence in the real world grows smaller as Mizrabel grows stronger using their heart power.

As one of the only toons that hasn’t been locked in the tower, you have to retrieve your peers before it’s too late and they’re trapped in the illusion forever. Some of them are toons familiar to Mickey, some are friendly Disney characters not part of his universe, some are villains which Mizrabel is manipulating to attack Mickey who will need to be knocked to their senses before they can be saved; all must be brought to the safety of ‘The Fortress’ just outside the Castle of Illusion before Mizrabel’s handiwork can be undone. 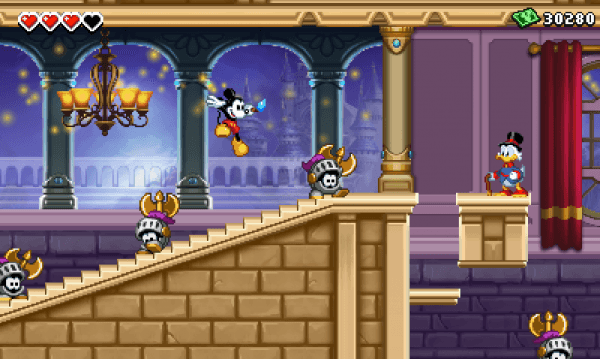 It’s a 2D side-scrolling plat former like Castle of Illusion but with renewed focus on action, because as well as Mickey’s bottom bash attack, he can now do a spin attack and use his paint and thinner. Paint, thinner and the spin attack were all introduced by the Epic Mickey series, but as it’s on a handheld, Epic Mickey: The Power of Illusion has its own variation of these. Spin attack works much the same, but the paint and thinner are flung as blobs as a projectile attack, rather than the constant stream of the console version. Like the console versions, you don’t have limitless supply of paint and thinner – their levels are represented by individual gauges that recharge over time.

The other use of paint and thinner is to create and destroy in-world objects, but under a totally new system to the console versions. The way it works in Epic Mickey: The Power of Illusion is, using the two screens of the 3DS, when you see something that can be interacted with using the magic paintbrush on the bottom screen, you can touch it with the stylus, which pauses the action on the top screen and prompts a mini-game where you have to trace the given lines of the object as well as you can.

The quality of your drawing determines the quality of the object you create, meaning if you are slapdash with your brush (stylus) strokes, the platform you painted so you could climb higher could have spikes on it, or the cannon you formed could be as likely to hinder you as help you. It’s a clever idea and one that I haven’t seen before. On the other hand, the constant stopping and starting of gameplay to trace an outline of something doesn’t do wonders for the pace of the game. Gameplay never flows freely due to the constant interruption of having to draw something, often whether you want to or not because the outline in question is the patch of floor you need to progress through a level. 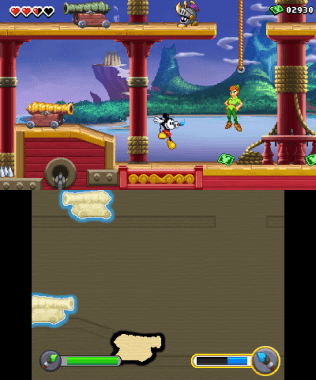 In other areas the game doesn’t flow smoothly either. It’s a linear, up and down, straight lines, make-your-way-to-the-exit affair, with decent boss battles at certain points along the road. Unfortunately, the developers have tried to make the aforementioned safe house “The Fortress” a hub world, encouraging you to go back after each complete level to make sure your latest rescuee is settling in okay. They then set side quests for you to do which require you to back track through levels to find something of theirs.

It wouldn’t be such a problem if these quests didn’t often hold the key to moving forward with the story, but they do which means a lot of dull backtracking isn’t just for perfectionists but for anyone who wants to make it to the end of the game. This means that as well as progress being slow-going in the levels thanks to painting and thinning objects, in the grand scheme of things the game ticks along at a pedestrian pace.

Initially, as the game goes over the control scheme in the simplest terms, you worry the level of challenge stays in the hand-holding realm. Thankfully, though, as you go on it reaches a good level of difficulty so as to be enjoyed independently, leaving you to work out some stuff for yourself. Then it’s over as quickly as it began. For the game to be so short after such a long wait for fans, to snatch it away in this fashion just as you’re getting used to the finer points of the control scheme, is almost cruel. You think the pangs of Disney-branded nostalgia, the roaming through the worlds of the Disney back catalogue and the rescuing of familiar faces is all going to carry on, then before you know it you’re at the end. 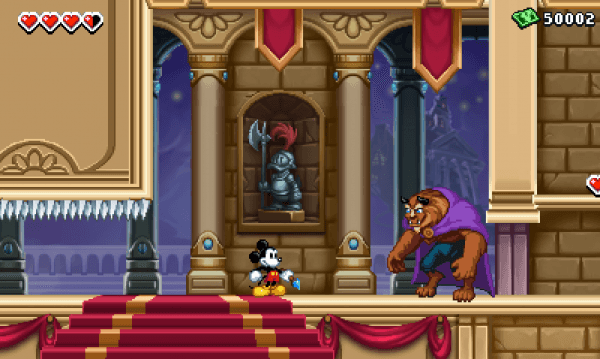 The hand-drawn sprites and sweet music make the game look and sound deceivingly good. While the gameplay doesn’t quite match the visual and audio value punch for punch, it still deserves merit for constructing such a charming world for you to enjoy. The 2D levels have a nice sense of depth to them, even without the 3D enabled, and the effect of walking through a half-complete illusion so that one side of the level is castle, the other is Disney fantasy, looks cool. The dialogue is cute, with loads of little jingles for completing a level or a side-quest and, for some reason, the sound of Mickey dying is funny.

All in all, it’s fantastic to see what is essentially a revival of a much-loved older series; in true Disney spirit, it brings hope to those who may have lost it and shows you should never say never. No one would have predicted a spiritual successor to Castle of Illusion Starring Mickey Mouse and here we are. Sadly, the additions taken from modern Mickey pack some neat ideas but are ultimately the games downfall. Having to constantly stop the action and paint something separately on the touch screen means you don’t get to stretch your legs properly as Mickey. The backtracking spoils the rhythm of the game too; it’s uninspired and most probably something added to lengthen what would otherwise be a brief interlude of a game.