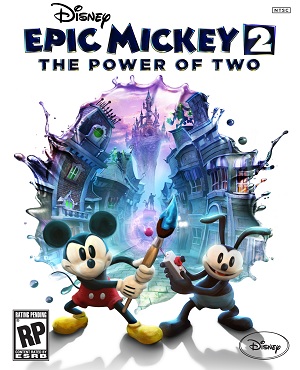 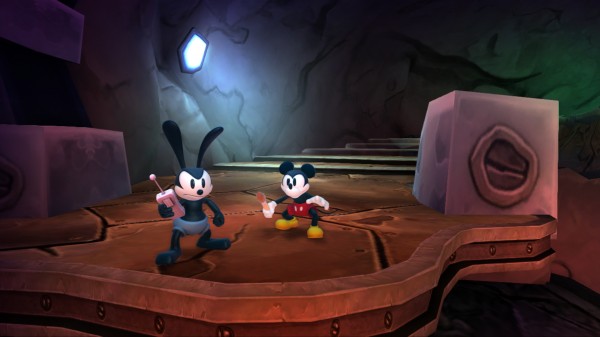 Overview
Mickey Mouse and Oswald The Lucky Rabbit return to the video game scene with Epic Mickey 2, the sequel of 2010’s Epic Mickey. Instead of being a Wii exclusive, Mickey and Oswald make an appearance on all major consoles. Wasteland is once again in strife and it is up to the team of Mickey Mouse and Oswald The Lucky Rabbit to stop the disturbance. Despite the great story, visuals and sound design, there are more than a few gameplay flaws that makes Epic Mickey 2 look like a silly symphony of poor game design.

Story
The story of Epic Mickey 2 immediately follows the events of Epic Mickey. In Epic Mickey 2, a character known as the Mad Doctor returns to Wasteland. After singing that he is a changed man and will be a good guy from now on, he warns of a new threat, one that is causing earthquakes throughout Wasteland. Oswald the Lucky Rabbit, also from Epic Mickey, helps the Mad Doctor despite being his foe at one stage. Gus, Oswald’s friend, and Ortensia, Oswald’s love interest, do not trust the Mad Doctor, so they call upon Mickey’s help. Mickey returns to Wasteland and teams up with Oswald to fight a new evil that plagues Wasteland. The story is quite good. They play with the themes of trust through Mickey and Oswald’s partnership as well as with the Mad Doctor in his quest to turn over a new leaf. It is told with colourful and spectacular visuals and some catchy musical numbers. 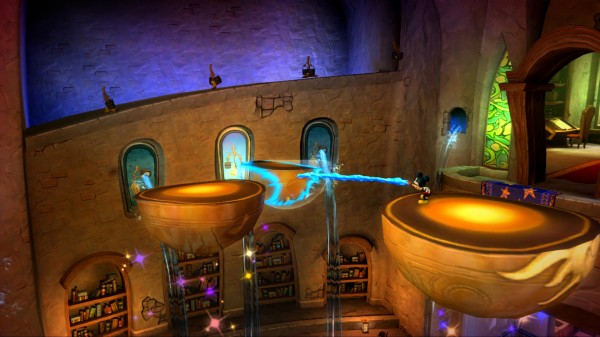 Gameplay
In any platforming game, it is imperative that the elements are executed with perfection or, at least, close to perfection. Sadly, Epic Mickey 2 can not be put in either category. The most important element, jumping, is quite a clumsy mess. Unfortunately, this comes down to a few elements. At times, the player would not know what surfaces are safe to jump on or what ones will slide you down. Take one of the earlier sections involving rubble. Looking at said rubble, it does look climbable. Believing that the rubble to be used, I decide to actually climb it, only to find out it is unclimbable. There is no distinction for the player to see what is climbable and what is not. The camera is also a big issue, but that will be discussed later.

Throughout the game, players will need to complete objectives and solve puzzles using Mickey’s paintbrush and Oswald’s remote control. Unfortunately, the creative team behind the design seemed to have run out of ideas on what challenges the player must go through as the game will get very tedious and very repetitive. The same type of challenges will continuously pop up; bringing more frustration on top of the game’s other issues. Compiling to the problem are the objectives themselves. At times, they are not quite clear. Puzzles can also be confusing for the player as well and these problems pop up right from the start. There is a somewhat redeeming factor and that is some decisions will affect the game down the track. It is not as deep as other games with decision making as part of their game design but it also means that no two playthroughs are the same, if one does play through this game a second time. 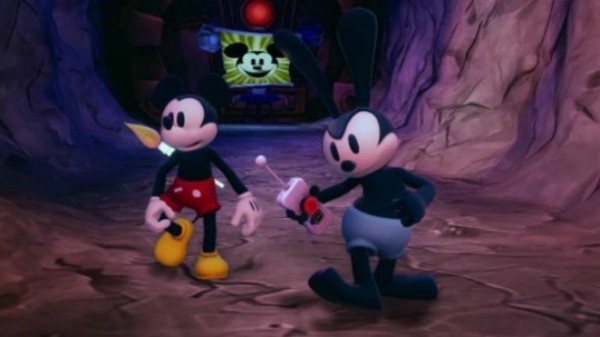 Combat is also an issue. Using the magic paintbrush, Mickey can either thin out his enemies or paint them so that they join Team Mickey while Oswald uses a remote control. This is a good idea to allow the choice for the player to choose how they will deal their enemy, but the execution of it is quite bad. Collusion detection is the main problem. The hit detection area given to enemies is quite small compared to the greatly bigger hit detection area for Mickey. For the enemies, they are forgiven for missing an attack. The player could avoid it only to be hit afterwards. On the other side of the spectrum, it is all about perfection for the player. They would have to be spot on with their attacks, whether it is from a paintbrush or a spin attack. This is an unforgiving challenge upon the player.

Speaking of Oswald, he is now Mickey’s partner in crime. With that said, he is far from a lucky rabbit. If the player is someone who prefers a single player experience, prepare to be disappointed with Oswald’s AI. While he will follow Mickey around, at times, Oswald would just do his own thing. Players use the O button (PS3 version) to call him in order to progress through a level. There will be times where Oswald would just disobey the player or do something completely different. Combat is no exception to bad AI as he will get in the way of Mickey’s attack. A fix to this would be to allow the player to take control of Oswald when required, like the LEGO video games. Yet, such an option is not present, leaving single players fuming with frustration. This would be a good time to grab a friend and play through the game with them. They can not be more incompetent than the AI.

From the commentary concerning the first Epic Mickey, the camera was an issue which plagued the platforming elements. While I can not compare the camera in Epic Mickey 2 from its predecessor as I have not played the first game, I will still say that the camera is bad for a platforming game. This affects the jumping mechanic immensely. Gaps can be distorted to give off the illusion that the gap is shorter than it really is, often resulting in an unnecessary death. The default position is too low, even if the player manipulates the camera’s position. This is where the Playstation Move is handy, even recommended. The Move controls the camera as well as aiming with the paintbrush, knocking two birds with one stone. It is quite a blast with the Playstation Move. 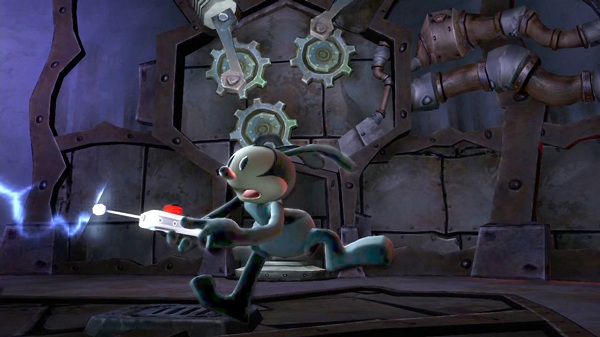 Visuals & Audio
While the gameplay mechanics is not exactly great, the visuals are at the opposite spectrum. The cartoon world is colourful and full of life. The cutscenes, both the cartoon and game engine cutscenes, are stunning and add to the story. Environments give the game the charm that a Disney cartoon gives to its audience. More often than not, I would paint the world so that I could reveal the beautiful cartoonish world that the art designers created. I would suggest to the player to do the same thing.

The audio is also done right. In fact, music happens to be one of the core mechanics of Epic Mickey. Throughout the story, there will be the odd musical number, with the first one appearing at the beginning of the game. Disney only brings high quality musical scores to the table and Epic Mickey 2 does not disappoint. They are fun and catchy with some good lyrics. The orchestrated score is excellent. It will change with every decision made in the course of the game, which is an interesting idea executed right. Voice acting is present for most characters and it is enjoyable.

Overall
Epic Mickey 2 had the potential to be an excellent game. It has a great story, interesting characters, colourful visuals and a score that is heavenly upon one’s ears. Sadly, it receives the score it does because it fails on the gameplay front. Camera issues, jumping issues, a shoddy AI partner, repetitive objectives and confusing level design and puzzles add to the growing frustrations that the player develops as they play this game. Mickey Mouse does deserve better than this.