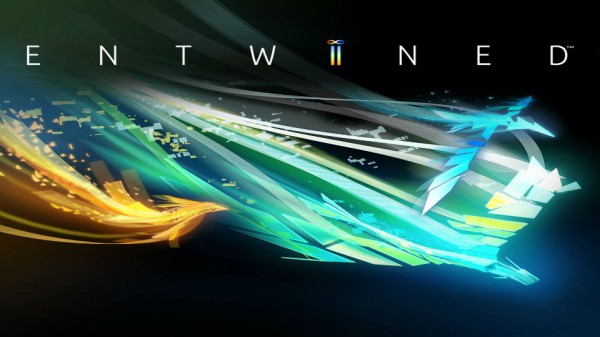 Sony has really been waving the indie flag since their announcement of the PlayStation 4. Their emphasis on showcasing independent titles, however, stems further back; more specifically, once Journey by thatgamecompany became a huge success on the PlayStation 3, the proverbial light bulb switched on over their heads. Most recently, Pixelopus – a group of fresh, game design graduates – reaped the benefits of this push when their first title under the SCE Worldwide Studios umbrella, Entwined, was revealed and spotlighted during the PlayStation Media Briefing at E3 2014. And that same day, it was available on PSN for the PS4, with a PS3 and PS Vita release due next month (although it is a cross-buy title, which means PS4 purchasers will have access to all three versions). 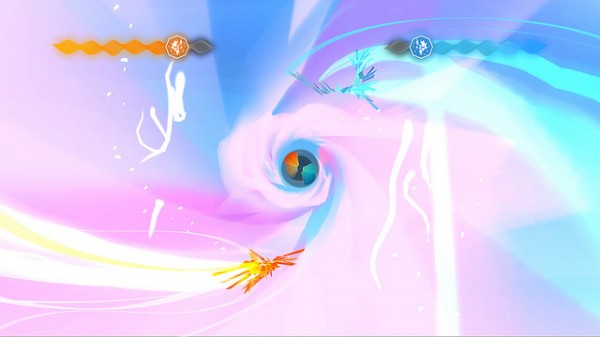 “Forever apart, always together” Entwined is, at its core, about two souls – a bird and a fish – who are in love, and although they come from different “worlds”, journey to unite in every lifetime. You, as the player, control these soul-mates as they travel through a metaphysical space in order to find each other and fuse into a soaring dragon. The bird is controlled by the right thumb-stick, and is unable to pass into the left hand side of the screen. Mirroring this, the fish is governed by the left thumb-stick and is restricted to the left hand side of the screen. The goal of gameplay is to successfully guide these two characters through the corresponding “gates” as they approach. In ‘Story Mode’, there are nine ‘Lifetimes’ (stages) to play through, each ramping up in difficulty. Everything is colour coded to match the characters on-screen, easily signifying to the player the specific gates that must be passed and orbs that must be collected by each. The aforementioned orbs are placed in-between the sections of gates, and add to the two respective meters that, when filled, allows the player to initiate a bonding process by pressing ‘L1’ + ‘R1’ together. 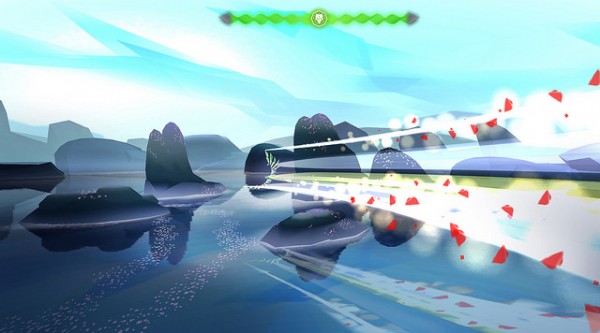 There is almost a complete 180° arc of motion achievable with both, and when they meet at either the top or bottom of the screen, they glow green and are able to pass through green gates. The patterns of the gates get progressively more complex and difficult, with the speed of the advance increasing as well. Missing a gate brings your meter down a notch, but completing a stage on a continuous run sees the animals’ tails glow, and once they combine at the end, they will be transformed into the ‘Evolved Dragon’. Greeting the player at each level’s conclusion is an open area where they made fly freely, collecting orbs before enabled to sky-write until a bright light invites you to the next Lifetime. The ‘Story Mode’ presents a good challenge, especially as it wears on, but is ultimately short, able to be completed in under an hour. The true value and replay-ability of the game comes from its ‘Challenge Mode’, whereby players must survive without missing a maximum of three gates long enough to unlock the next arena. Leaderboards promote competition and, trust me, you’ll either be rage-quitting by the third stage, or spurred on that much more to go all the way. If you’re the latter type of person, expect to spend hours replaying after agonizing failures until you finally succeed. 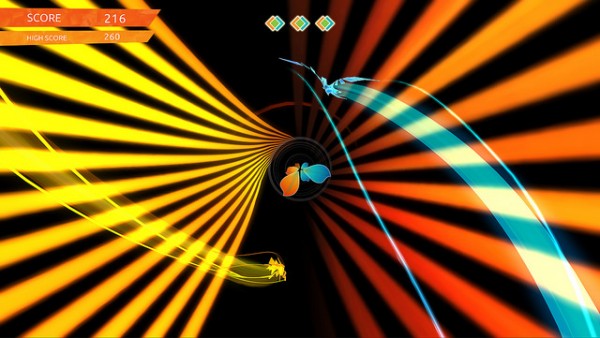 As mentioned, colour plays a huge role, not only tonally and in the aesthetic style of the game, but more integrally in its implementation as the prime form of player guidance. The golden fish and azure bird leave trails of light as they swim and fly through space, advancing head-long into their correlating gates. The backdrop of each Lifetime follows its own unique theme, reflected in all visual elements on-screen, and shifts as you progress, sometimes becoming somewhat of a distraction with its pulsing auroras. This is not a bad thing, but is instead a welcome facet that augments difficulty further. Starting off in a serene ‘Water’ level, swooshes and other apt sound effects can be heard, but there is no actual body of water visible. It is in this sense that the arenas, so to speak, are abstract representations of their given theme. Some are more overt and recognizable, such as the ‘Earth’ level, delving into defined caverns and decorated with floating rocks. 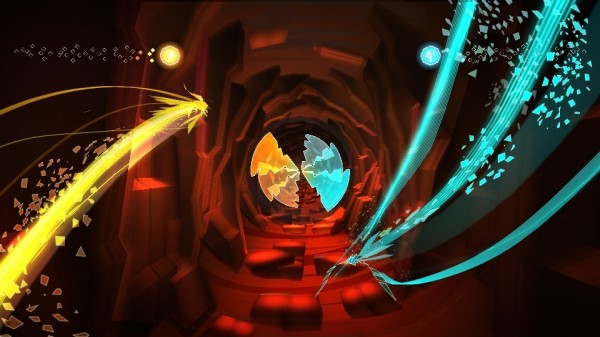 As you succeed in extending your chain, the luminous creatures grow even more bright, but in phases, not exponentially. As mentioned earlier, transforming into the ‘Evolved Dragon’ takes an extended period of successes, but with no written score to keep track of your chain, the game relies on visual and audio cues to depict when the bird and the fish are at their peak luminescence. It’s hard to identify the difference between this state, and the other steps leading up to it, but thankfully the only time it is of any importance is if you are hunting a special Trophy called ‘Resolution’ that requires you complete every level as the ‘Evolved Dragon’ – which has orange and blue accents – and not just an ordinary one. As you reach the point where you can merge, a prompt appears telling you to tap ‘L1’ and ‘R1’; the music picks up, everything gets faster and upon triumph, the two beings metamorphose into a majestic, emerald dragon. The area in which you are set free is a more solid manifestation of its related theme; i.e., the ‘Fire’ area housing a volcano-esque structure in the center with lava pits and cracked ground below, and clouds above that throw bolts of lightning. It’s actually quite a hellish landscape for such a chilled game now that I think about it! 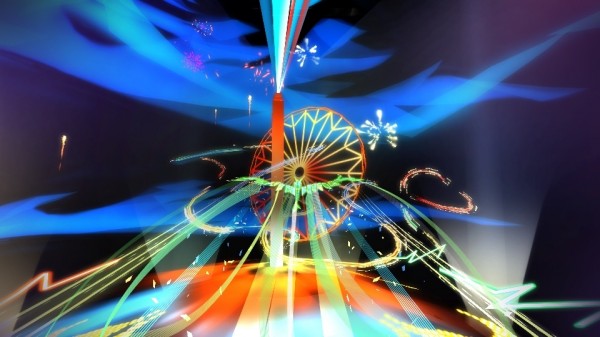 Entwined is a beautiful, calming experience…until you decide to tackle Challenge Mode, that is. The gameplay is simple, but that doesn’t mean it’s easy. Visually, the game is stunning, and the use of colour is both artistic, but also smart in regards to player guidance. For the same reason that people enjoyed Flower, gamers will surely appreciate the peace and serenity of flying around, skywriting with a rainbow emanating from your wings as the rare experience in gaming that it is, as opposed to all the violence and shooters we are marketed year-round. There are momentary lockups during play as the game connects and sends information to PSN, which may well be demonstrating this young studio’s inexperience on the technical side, but the only justifiable reason for hesitance to buy Entwined is the weight of its value. If Challenge Mode is not to your taste, as you get frustrated quite easily, then you aren’t going to get much more than 50-90 minutes out of Entwined on average. At $11.95, that’s something to consider, but also a point of consideration is the fact that it is a cross-buy title. I’d recommend you give into the halcyon aural atmosphere and hypnotic visuals, as the basic but addictive gameplay will end up calling you to return and attempt to top that leaderboard, regardless of how high it’ll raise your blood pressure.