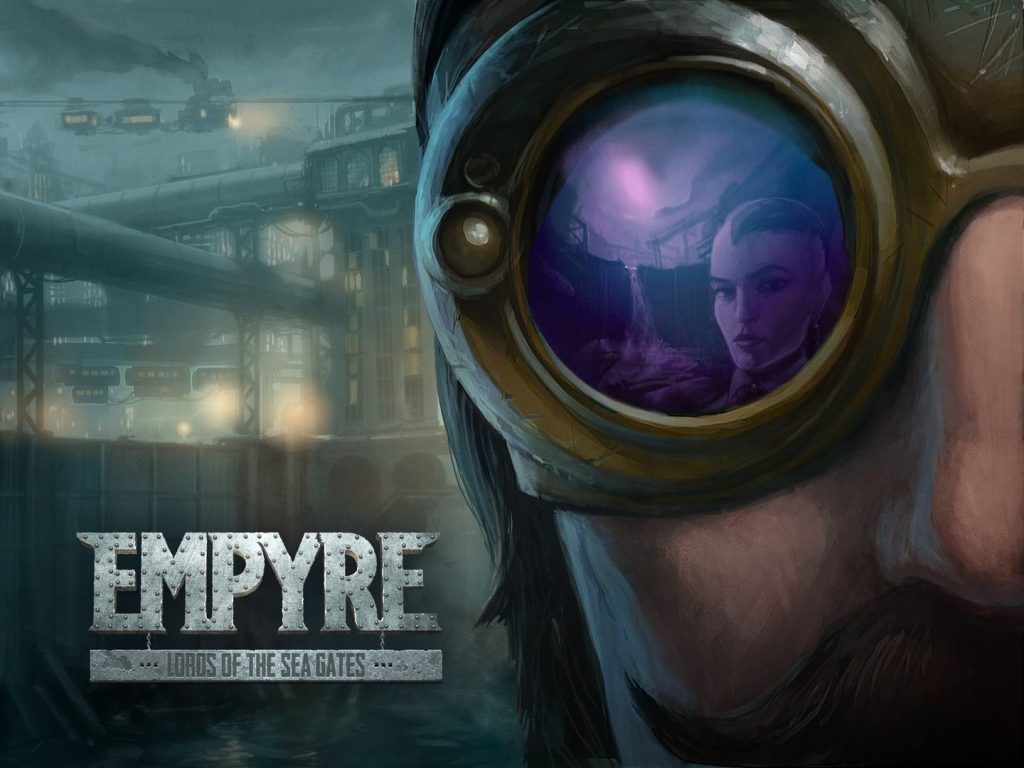 Empyre: Lord of the Sea Gates

Empyre: Lord of the Sea Gates is an RPG set in an alternate version of New York City in the 1900s. The rising oceans has flooded the cities, shattering them into a series of small city-states built on top of the skyscrapers that are above sea level. The situation becomes dire when the pipes that bring fresh water into New York City run dry. In this old-school style RPG, players are sent on an epic journey to save the city by bringing back the water to a parched city.

The world of Empyre: Lord of the Sea Gates is a unique setting mixing modern day themes of environmental change with an alternate history of early 1900s New York City. The world is very well crafted. The city-states of New York City have their own unique cultures that trace their roots to the many groups of people that make up the city, from the NYPD officers that once patrolled the streets before the flood to the Italian-American Mafia families battling each other on the roof tops. The game’s plot pales in comparison to the well-crafted world that it is set in. While the dialogue is decent, the plot itself tends to be dull due to the simple and straight forward nature of the quests. The options for character building through dialogue choices is rather thin and uninspired. 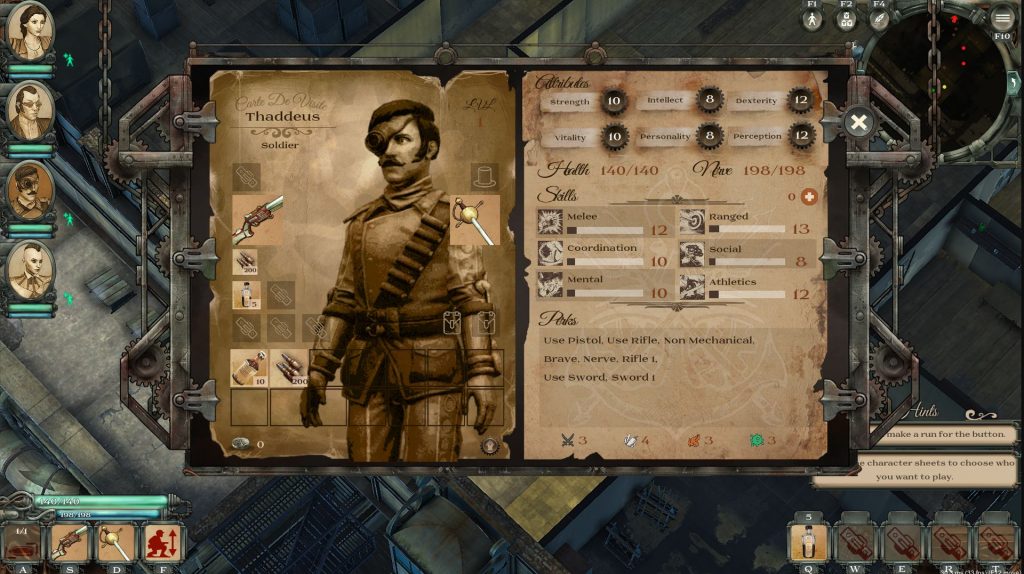 Empyre: Lord of the Sea Gates is a pretty bare bones RPG. Players start the game with an option between four pre-made characters with different play styles. Each character can equip up to two weapons and a belt of items to be used in combat. Characters don’t have any active skills beyond the items in their belt. The character system is dull. The skills are basic twists on character attributes. The perks are mostly focused on improving weapon use or increasing certain skills and attributes. There is very little room for serious min/maxing.

Combat is in real-time, with the option for players to pause the game. Orders can only be issued during the pause menu. It wouldn’t be too bad if the game did not require an incredible amount of micromanaging. Upon killing an enemy, characters do not immediately target the next available enemy, even if they are under attack. Instead, they will happily stand still until they either die or are issued a new command. The command system is equally silly, as health items are not prioritized properly. Players must clear a character’s queue and then issue the command to heal. It’s bulky, awkward, and completely unnecessary.

Outside of the terrible command system, Empyre: Lord of the Sea Gates has a decent tactical combat system. The game uses an excellent cover system that recognizes partial cover and line of sight. Status effects from items are extremely potent and can easily turn the tide of battle. 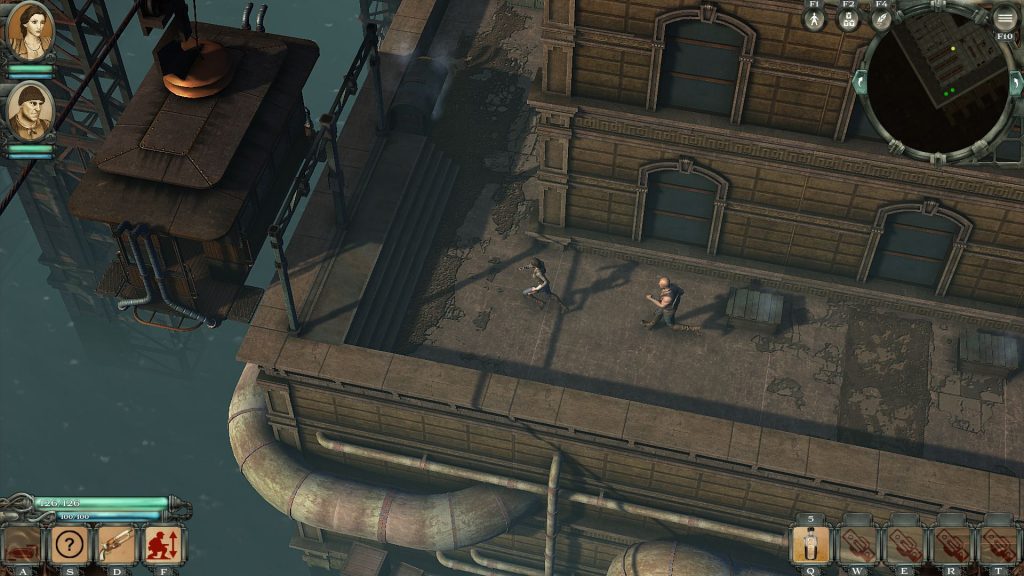 Empyre: Lord of the Sea Gates’ user experience is a mess. Character management is extremely poor. While the character sheets are serviceable, the level up menus are uninformative and unhelpful. Each level will reward characters with a skill point, with perks being rewarded every few levels. The perks get tool-tips that carry some information on its effects, but the skill points do not. Players must find out exactly what skill does in the main character sheet before entering the level up screen. The tool-tips are not always helpful, either. I encountered perks that had no correlation to any visible stat or skill in the character screen, such as the perk Dexterity that was supposed to raise the invisible stat of the same name by three.

Inventory management is a clunky affair. Items go into the active character’s inventory, which can be pulled up along side the character sheet. Ammunition and health items need to be spread between characters, but Empyre offers some really awkward solutions. Items can be dragged and dropped onto character portraits to move them. I was stuck experimenting to figure out how to split stacks of items. To get to the split stacks menu, the game awkwardly requires players to hold the alt key while dragging an item to another character. It doesn’t seem like the game supports splitting stacks within character’s inventory. There is a menu for moving items around characters is available, but it does not show what is currently equipped for each character. Being able to see what items are equipped on each character in this menu would make swapping around weapons and items between characters a lot quicker. 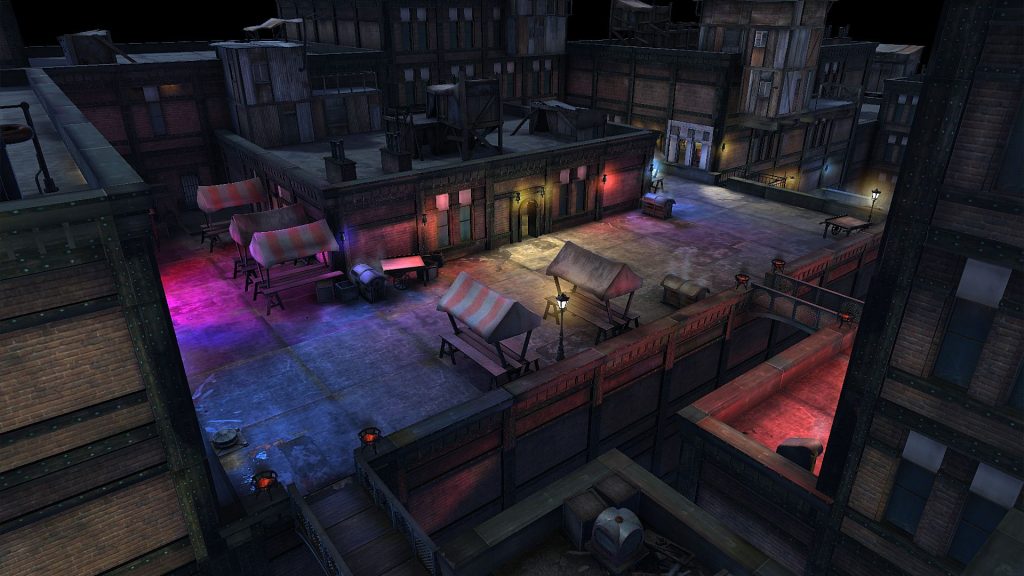 The dialogue UI is way too scattered. Since there is no voice acting, the developers opted to better establish the speaker of each line by having the lines appear in a text box next to the character portrait. The result is the eyes needing to dart to the top left side of screen to view the player characters dialogue and then move to the middle right side of the screen to read the response from the NPC. If the game requires players to make a decision during dialogue, the eyes must then travel to the bottom edge of the screen. There is a good reason why a large text box with changing character portraits have been a mainstay of RPG games: because it works. It’s a minor, but annoying hassle to have to bounce around the screen to read dialogue because the developers opted to reinvent the wheel by creating a square.

The levels design is uninspired. For the most part, levels are completely linear in nature with the odd side quest thrown in occasionally. There is very little to encourage players to wander the side streets. Tidbits of lore or hidden loot is few and far between.

The game is lacking a bit of final polish. The character pathing is a little off, so characters will sometimes get caught running into walls or talking to NPCs through walls. Additionally, hitting space to forward a dialogue sometimes causes the game to automatically select the first option when players are given dialogue choices. There also seems to be many glitched chests. I encountered several chests that were highlighted as interactive objects, but no clear way to open them. Thankfully, the saving grace for Empyre’s item system is the fact players can loot all unclaimed items on the map before leaving the level, which gets around the glitched chests or missed loot. 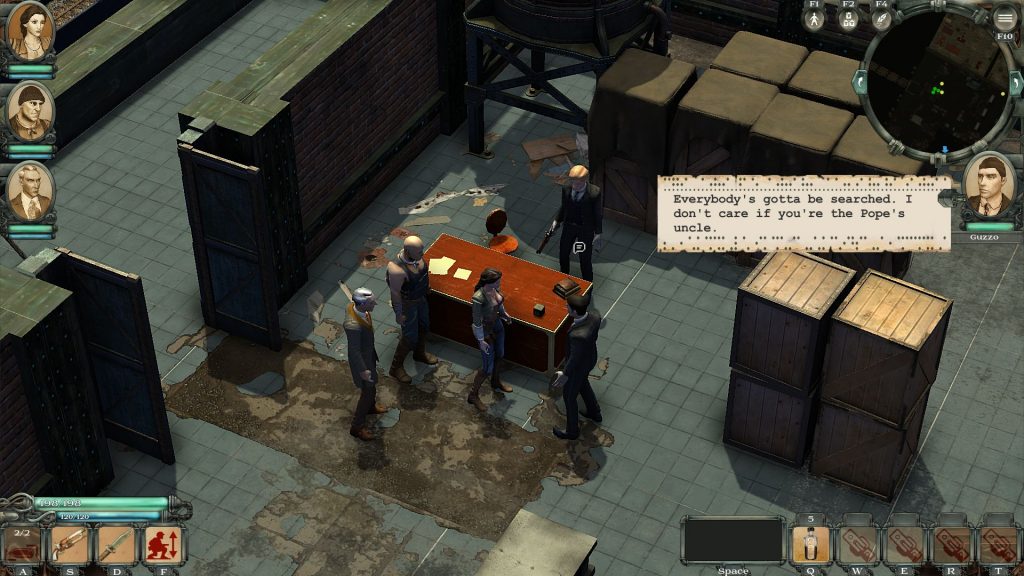 Empyre: Lord of the Sea Gates’ graphics is a bit of a dull with a few bright spots. The art style is a 1900s look through black ink illustrations on yellowed paper and period-style 3D graphics. The 2D material is fantastic. The artists do a wonderful job with the illustrations, but the amount of blank character portraits is disappointing. It seems like only the major characters have a portrait, while minor NPCs will have to settle for a blank silhouette. The 3D graphics, on the other hand, are pretty lack lustre. The animations look awkward and unnatural. There are very few animations in the game. For example, there is only one holstering animation, so the end of combat tends to look like an entire squad of clones are moving at the same time.

Empyre: Lord of the Sea Gates has a mediocre audio experience. The soundtrack is a mix of retro-inspired tunes from the early decades of the 20th century. There are some decent songs, but the soundtrack is extremely limited. It already feels like the player is listening to the same handful of tracks after an hour of play. The sound effects are a bit of a mixed bag. Some are decent, while others feel cheap and out of place. 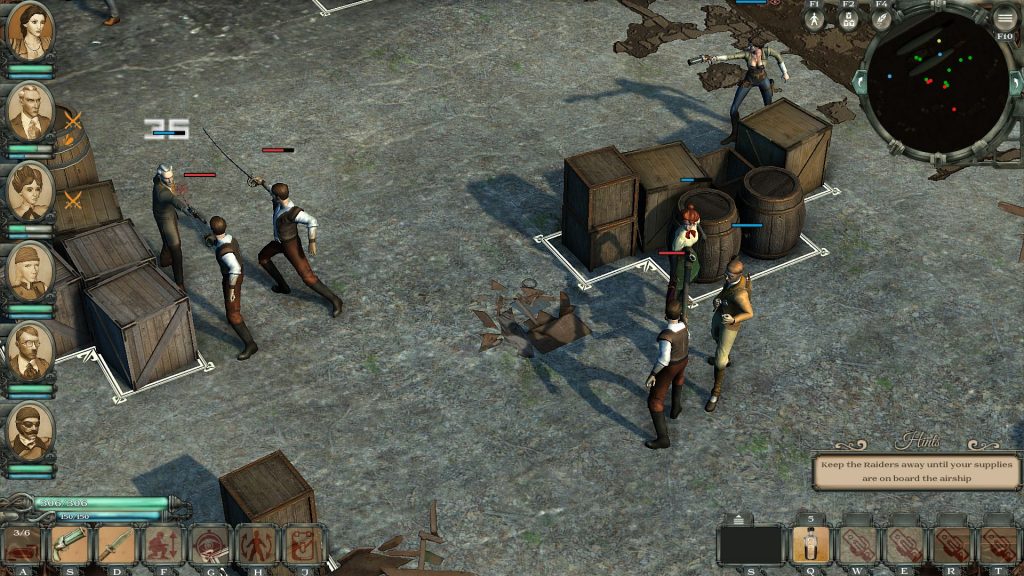 Empyre: Lord of the Sea Gates boasts a lovely world and not much else. The user experience is extremely rough and poorly thought out. The combat system is hamstrung by the need for micromanagement, and the level design is uninspired. The audio/visual presentation is mediocre at best, with the lone bright spot being the 2D artwork. Unless you are embarking on a gotta play ‘em all quest for RPGs, it’s probably a safe bet to skip out on Empyre.

Empyre: Lord of the Sea Gates crafts a marvelous world and then squanders it with poor gameplay and a mediocre audio/visual presentation.
4