Brain trainer games are clearly popular, what with all the training games that have come out on the DS. They’re a way for you to feel like you’re playing a game, tell yourself that you’re doing something good for your mind, and fun facts to whip out in conversation. Like hey, did you know my brain age was, etc etc. So it’s no surprise that the brain-training genre has hit the other mobile gaming device, the iPhone. So, how does it measure up? And does Einstein beat out Dr Kawashima?

Einstein Brain Trainer works simply enough with a daily test for you to do, workouts to hone your skills, and just general exercises for practice. Instead of having a ‘brain age’ there is a score and this puts you in different categories. Don’t expect to see it move very often though, unless you throw your scores any progression you get will be made gradually. Unless you’re operating at your maximum capacity, that is. 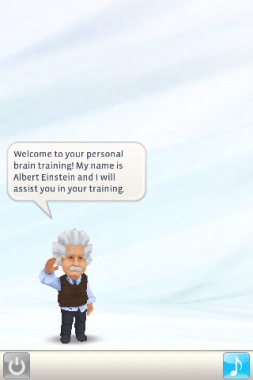 There are so many different exercises that it will take a while to make it through all of them. Unlike the DS Brain Trainer game, these exercises take on various forms and you won’t likely get bored because rarely are exercises repeated soon after each other. While some are obviously the standard sort, such as mental arithmetic, or memorization of words, which you’ll see more often, there will be a few thrown in that you aren’t as familiar with, just to mix it up. 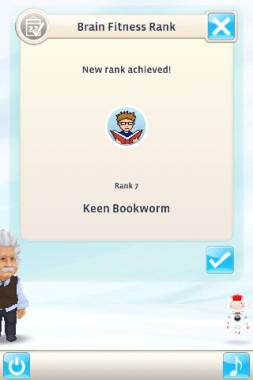 Whether it actually does test your brain’s abilities is sort of up in the air, especially since the app does lag sometimes which can result in an incorrect answer for you. Plus, some of the tests are a bit sketchy in terms of what they’re trying to measure, like one where you had to memorise the order of the smallest to largest object, when some of the objects weren’t really discernible in their pictures. Most of them are fairly easy to tell as brain exercises, with logic, calculation, vision and memory being the different subjects you can be tested on. 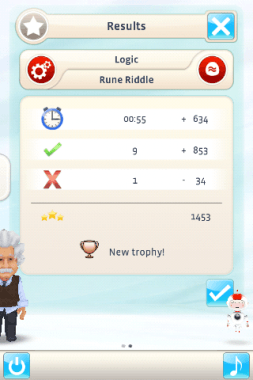 The game has a very sensitive difficulty adjustment setting, so if you fail one or, God forbid, two questions in a row, then it will scale back immediately in a noticeable way. This is really handy if you’re having trouble, however, if you’re like me, you tend to take it as an insult and it makes you want to redo the entire level to prove the game wrong. It seems to be very sensitive to those who might want to rage quit if it gets too hard, which can either be great or frustrating.

And, of course, there are plenty of achievements such as gaining certain scores within a test, and then achievements for the overall game. So if you are one of those people who love getting achievements then this will definitely cater to that competitive nature. Plus, there’s a hot seat mode where you can play with up to 4 people if you want to take them head to head and really show off your brain training skills. 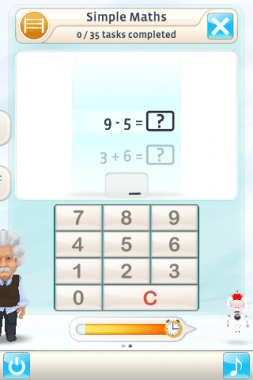 There’s a tutorial at the beginning of each test the first time you do it, so too bad if someone else tries to hop onto your account and play because some of the games are a bit far-fetched and hard to catch on to.

The visuals are pretty simple, but Einstein and his little helper robot guy is 3D modeled which is nice and fancy. This may attribute to some lagging though, which is unfortunate. They’re fun and cute but also annoying in the way that you can’t skip them. 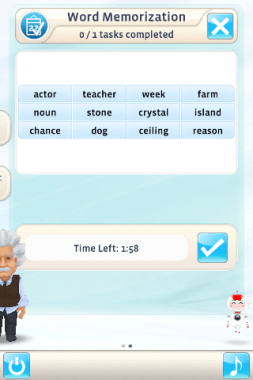 Einstein Brain Trainer sounds kind of like the Sims in the way that the music is loud, happy and not really the sort of thing that you’d want to listen to while you’re trying to remember the path a robot took around a grid. Some more concentration and time sensitive music would be great, but you can always just turn off the music if you’re finding that, like me, it doesn’t help your brain have that feeling of urgency it should. 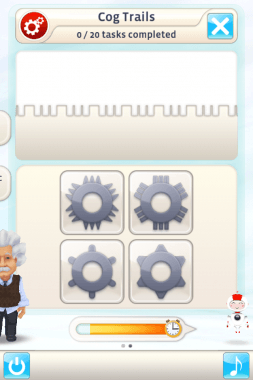 Einstein Brain Trainer is definitely a good app if you’re looking for something to make you feel like you’re actually using your brain while still playing a game. It also has that competitive feeling with the trophies that will really interest those with that side in them (which I’m assuming is all of you, if you’re looking for a brain training game).

It’s the sort of app which will sit in your phone for a while, even if you lose interest you’ll still check back every so often and play around with it and see if you can score any higher in your daily test, and it certainly does what is advertised, and with more interesting twists than the classic Brain Trainer games. Apart from a few issues with it, it is a solid app overall.