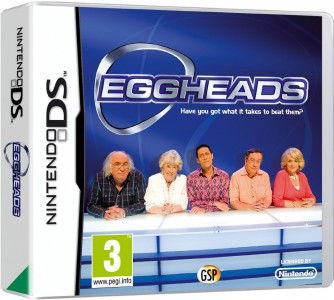 Overview:
Eggheads, for those who don’t know, is a quiz show aired on the BBC across the UK which pit’s a team of challengers against the Eggheads, a team of hand-picked quiz show experts, most of them having proven themselves adept at trivia through success in other quiz shows like ‘Mastermind’ and ‘Who Wants to Be a Millionaire?’. The team of challengers compete for a cash prize through 4 preliminary, one-on-one, three question rounds to decide which members of either team take part in the final round. Whether or not they scoop the jackpot hinges on just three questions in the last round (unless both teams are level and additional sudden death questions are needed to separate the two teams). If the Eggheads win, the prize money rolls over to the next group of contestants.

Now Avanquest Software, with Vacari on development duties, have brought the Eggheads to Nintendo DS, boasting of over 2400 different questions that were apparently set by the Eggheads team themselves. The setup of the game is very similar to the show, though fans of the show will be sure to pick up on where it differs. 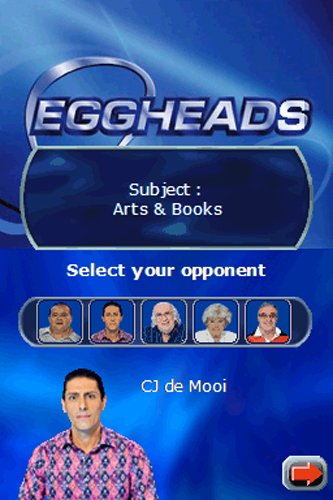 Gameplay:
The gameplay is, as you can picture, a fairly standard quiz game setup, making use of the console’s dual screens to display information of the tip and interactive elements on the bottom. For example, your opponent and the current category of question on the top screen, with the scoreboard and mock-up of the studio on the bottom screen; or, when answering questions, the full written question on the top, with the multiple choice answers of the bottom for you to tap (or a keypad to type your answer if it’s a sudden death round, where no answer options are given). You could say the question and answer layout isn’t completely authentic, as the answers are displayed vertically and highlighted in a different colour, and the questions are written not spoken, but only the pickiest of Eggheads viewers would care about, or even notice, this.

The main area in which the Eggheads game differs from the programme is its selection of modes. As well as the traditional battle of general knowledge seen on TV, there is a training mode and a challenge mode. Granted, the training mode just offers some quiz questions to warm up to in order to get into the swing of things – even if it does use the same questions as the main game, making it better preparation than it should be, as questions can come up which you’ll have already seen before in training mode.

Challenge mode, however, is quite literally a different matter. How mental arithmetic sums get you in the mood for answering questions on Geography, Food & Drink, History, Sport, Politics, Science, Arts & Books, Film & Television and Music, I’ll never know, but it seems Eggheads on DS fancies itself as something of a brain training game as well as a quiz game. Ultimately, they’re just 10 short, entirely optional mini-games, so shouldn’t be complained about, but the way in which playing these games unlocks hints and bonuses for the main game tampers with the classic formula. Using these extras doesn’t really seem in the spirit of Eggheads. 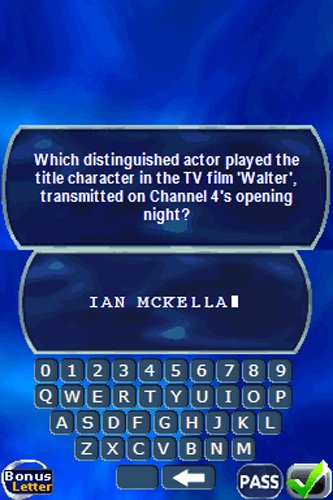 Visuals & Audio:
The game carries the official Eggheads them for the menu music. Elsewhere, though, such as when answering questions, it uses some weird piece of music which aims to create tension, but instead has you reaching out for the volume control as it’s on a repetitive loop and difficult to concentrate with it playing. The game even features cut-outs (harshly cut-out cut-outs might I add, as they look a bit pixel-y around the edges) of the seven Eggheads, five of whom are randomly selected each time you play, just as it is done on the actual gameshow.

As dull as the main show is, the game still seems to be missing something when it comes to ambience. Without the Eggheads’ meandering stories which eventually lead to an answer, or a host to fill gaps with inconsequential commentary, it doesn’t feel quite like Eggheads. The physical likenesses go some of the way to lending an Eggheads seal of approval, but competing against a set of algorithms, programmed to get certain questions wrong and others right, takes the fun out of it, and the speech bubbles that replace dialogue are tacky.

Overall:
The Eggheads game on Nintendo DS doesn’t feel an authentic recreation of the show; for a start, challenge mode is totally unrelated, as are the bonuses that come with using this mode. The speech bubbles that go in place of voiceovers create the sense of playing against a machine, although are still probably a better alternative than a limited selection of pre-recorded phrases which may not fit the context and would grow irritating after a short time. Even the questions seem ever so slightly easier than on the show, although this last point isn’t necessarily a bad one as it’s much more fun to be getting answers consistently right instead of only getting a couple correct here and there. Eggheads on Nintendo DS doesn’t have the greatest production values, but the menus are simple and easy to interact with, and most importantly the questions, Eggheads branded or otherwise, should satisfy the type of person who watches the show.