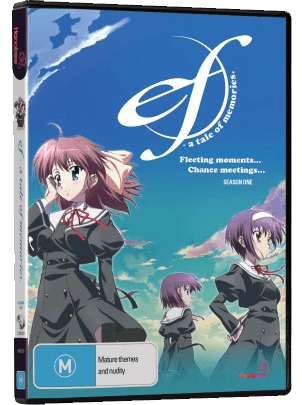 ‘Ef – A Tale of Memories’ is a romance anime, adapted from a two-part visual novel, ‘Ef: A Fairy Tale of the Two’. It was produced by the animation studio Shaft and originally aired in Japan in the latter part of 2007. Thanks to Hanabee, the complete season has been brought to DVD in Australia. The genre of love/romance is known to generally appeal to a more female-centric audience, but can Ef – A Tale of Memories create some fond memories for all?…

Ef – A Tale of Memories deals with many themes; dreams, love, abandonment, life’s struggles…all within the self-contained stories of a group of teenagers. They all know each other, though they rarely physically intersect or crossover on screen. The first main tale centers around Hiro Hirono, whose bike is stolen on the way to Kei’s Shindo’s Christmas Eve party by a frantic girl attempting to catch up to a thief who stole her purse. Hiro runs after her, only to find his bike mangled and the girl lying unconscious on the street. After she awakes, Hiro learns that her name is Miyako Miyamura. Worried for her health after a perceived bad fall, Hiro stays with her and, as a result, misses the party. Speaking of Miyako, at first she comes off likes a ditzy stalker-type, but halfway through the season you begin to sympathise with her due to learning her sad back story (see below for a hint).

Hiro, who is a working Manga artist, has always had Kei watching his back, attempting to keep him focused on school as his attendance is poor and his grades are fledgling. She looks out for him like a Sister would – after all, they are childhood friends. But the distractions keep mounting for Hiro as he discovers that Miyako attends his school. The two continue to spend time together, and it becomes perfectly clear that Kei has had a crush on Hiro for many years as she begins to exhibit jealous behaviour. The drama and tension between the three builds exponentially, with Hiro being none-the-wiser. You’ll have to watch the show to see how it unfolds…talk about a soap opera! 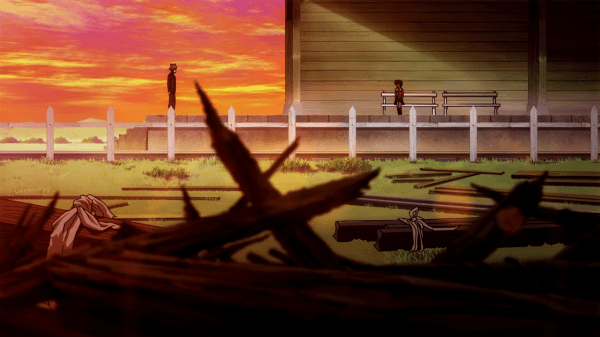 The other main tale concerns Renji Aso, whose dream is to be that shining knight; the Prince charming that saves the damsel in distress (aw, how sensitive). He frequently visits an abandoned train station, where he takes his reprieve, reads his novels and relaxes his mind. On one fateful day, however, he finds someone sitting on a bench of the very same station that he has also known to be deserted; his secret spot. “A chance meeting that lasted less than 45 seconds.” It was a girl we would later find out is named Chihiro (Kei’s Sister). Throughout the following days, the two hold some innocently awkward conversations and become friends, and find that they share a love for the written word.

Chihiro reveals that she has a memory defect disallowing her from remembering events beyond 13 hours in the past. It makes sense to Renji as the simple fulfilment of the promise to see her again leads her to run into his arms with tears in her eyes on their next meeting…as if no one with knowledge of her condition had ever bothered to keep a relationship with her. Although, Renji comes to understand why it was so tough for those people to do so soon enough… Their story, although introduced as the secondary one to the viewer, is ultimately the most affecting and the ending almost brought a tear to my dry, cynical eyes…I admit it.

Supporting characters such as Chihiro’s guardian Yuu Himura and film-student Kyosuke Tsutsumi help to flesh out the world and actually become major catalysts for our main characters’ actions and certain revelations. The show started off slow for me at first, and was quite repetitive, especially as it pertains to the Renji/Chihiro arc. Though, I understand the symbolism of it – intentional or not – as it reflects the repetitive nature of Chihiro’s daily life and her interactions with others due to her memory defect (which we learn the origins of later on). After a few episodes, though, the drama level raises and things start to move along at a faster pace…just don’t expect a sprinter’s pace. 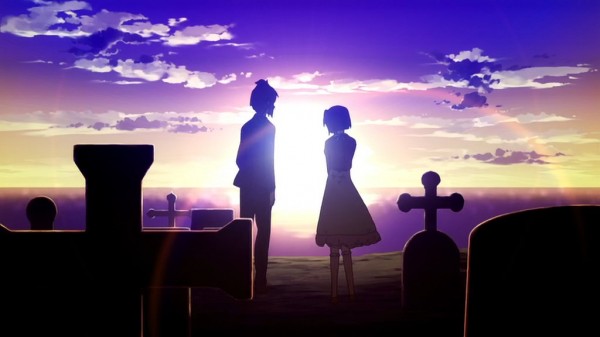 Sometimes, story elements are shoved down the viewer’s throat, over and over again, which to be honest felt a bit insulting to my intelligence. I lost count of how many times Chihiro had to reiterate her condition. And the dialogue can be extremely sappy. For example, Miyako speaks about her parents’ break-up by saying, “One day, my Mum disappeared from my Dad’s heart. And my Dad disappeared from my Mum’s heart.” She also pronounced “nuisance”, “new-a-since”, but that’s a whole other issue. These niggling issues aside, Ef – A Tale of Memories is super-effective in communicating the ups and downs of these relationships, successfully telling some deep (by the end) love stories with specific scenes that are purely heartbreaking. I didn’t expect it to leave any sort of impression on me, but it did.

The character designs herein are my favourite kind – with the big eyes that dominate the rest of the facial features, so much more can be done in terms of expressing emotions. The backgrounds, costumes and everything in between are very detailed. The overall cinematography (if we can call it that) is beguiling, however there were very few instances of these flat, top-down angles that broke the synergy of the show’s visual direction for me. I also noticed an extremely slight double image effect, particularly on the characters’ hair, but it seemed to either fade away or my eyes just got used to it as the show went on – barely noticeable to begin with.

Shaft are truly an amazing animation studio, and you need no further proof then the unique visual elements present here. They are very artistic: characters’ silhouettes taking the colour of the background as they walk against a black backdrop, the screen flashing the colour of an emotion being relayed at a particular moment, the screen going black with white “signal” waves vibrating centre screen when a phone rings…these are just some examples, and they are hard to describe and do justice to, but they are absolutely striking. 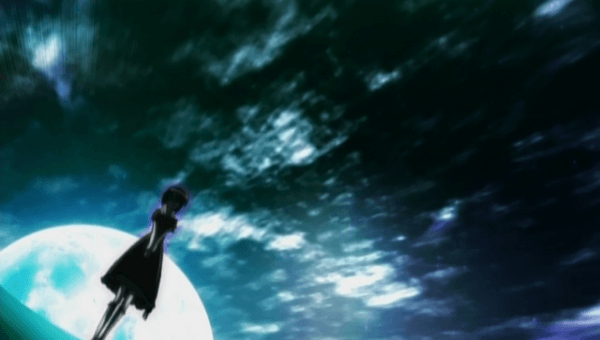 The visuals of Ef – A Tale of Memories are beautiful. The one place where the visuals fail to impress are not even part of the show, but in the presentation of the DVD menus. It looks so garish with these muted colours – as opposed to the vividness of the show – and words filling the screen, meant to represent their importance in the story as it relates to Chihiro’s journal entries and the novel she and Renji write together. But it is just too busy and distracting. The only words that should feature in a menu are the ones that you can interact with.

The music of Ef – A Tale of Memories is very expressive and emotional. The majority of the soundtrack was composed and produced by Tenmon, a Japanese composer who is working his way into Hollywood after scoring the feature-film Chronicle in 2012. Filled with light bells, strings and soulful piano, the score really hits the right tone and heightens the emotional impact of the story. The background music is generally quixotic with a slightly pensive undertone. It can also be quite melancholic. If you were having a whimsical dream, this would be its score. A phenomenal job from Tenmon and everyone involved. 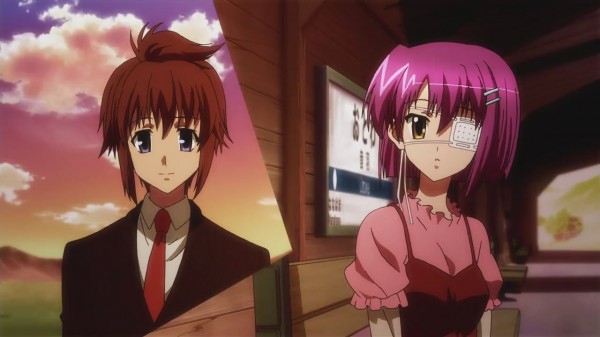 The opening song, the English version of ‘Euphoric Field’ featuring Elisa, is very catchy and each of the closing themes -“I’m here” by Hiroko Taguchi, “Kizamu Kisetsu” by Junko Okada and “Sora no Yume” by Natsumi Yanase – fit the characters they represent, Miyako, Kei and Chihiro respectively, pretty well. The voice acting is serviceable; however, whether in English or Japanese, the innocence of the characters is over-expressed, especially when it comes to Chihiro who is practically whispering every line. However, I guess that’s part of the Moe formula/appeal. Relating to audio settings, I appreciated the ability to put subtitles on all dialogue, non-dialogue only or not at all.

This is going to be a very bare section… the DVD release of Ef – A Tale of Memories comes feature-packed with two – count ’em, TWO! – extras! And a bunch of trailers, but they are barely a special feature. The two I refer to are a Clean Opening Animation and a Clean Closing Animation. The clean opening features the background music from the first episode’s intro credits set against the same black and white landscape drawings (1:28), whilst the clean closing features all the ending themes used throughout the season (8:42). The trailers included are for: Dream Eater Merry, Toradora!, Arakawa Under The Bridge, Bodacious Space Pirates, Alien Nine, .hack//G.U. Trilogy.

It’s best to tackle things without any pre-conceived notions, but it is hard sometimes…especially when the tag-line reads “fleeting moments…chance meetings…” But, I’m not ashamed to say it (I am going to continue to tell myself that), but Ef – A Tale of Memories actually grew on me. I knew what to expect, and I just didn’t think it would have appeal for me whatsoever. But I guess I am quite the sap, because Ef – A Tale of Memories’ story – whilst cliché and corny – has a strong emotional core that translates extremely well in the hands of such a great animation studio in Shaft.

It definitely has its flaws; the plot is slow to get rolling, the dialogue is sometimes cheesy to the point of being cringe-worthy and the voice-acting (both original and English dub mind you) is largely so cutesy it’s almost unbearable. But, the characters really start to blossom after 3 or 4 episodes. I am, as usual with anime releases, disappointed with the lack of extras, although I am now resigned to the fact that this is the norm in the medium. However, $49.99 is still quite pricey considering this lack of features. Yet, I still highly recommend A Tale of Memories, though maybe not to the staunchest of males out there. The female contingent will love it, and if you’re one who’s secure enough in your manhood to watch a touching love story and not be embarrassed, then you should too.