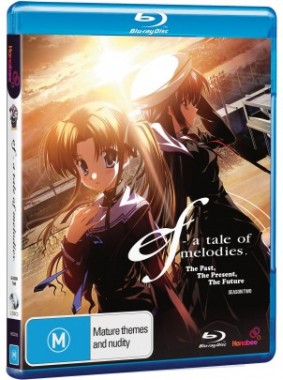 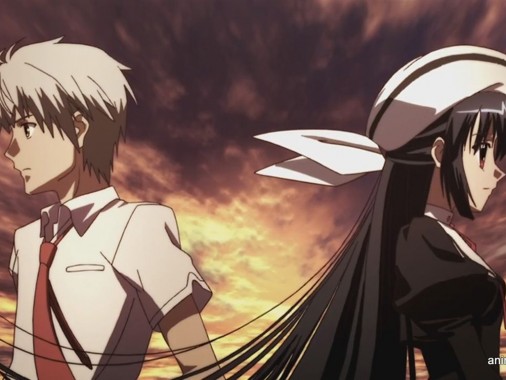 Ef: A Tale of Melodies is the second season of the Ef anime series. Not to be confused with the first season: Ef: A Tale of Memories, this season details a completely different plot focusing on completely separate characters.  Animation Studio SHAFT (famous for other anime releases like Madoka Magica and Negima) along with publisher Hanabee have brought this second season to Australia shores in both DVD and Blu-ray. Set as both a modern drama and romance, Tale of Melodies tells a relatively dark tale of relationships and fate. Putting numerous spins on the classic “happily ever after” romance, what kind of appeal does this collection have for western audiences?

The plot of Tale of Melodies is broken up into two separate timelines, one set in the present, and the other set in the past. The present timeline revolves around a talented musician named Shuichi Kuze. A world class violinist, the young Kuze should have the world at his feet. At least, that would be the case if he weren’t dying. Resigning himself to this fate, Kuze goes about the remainder or his days trying to keep as distant from other people as possible. However, when he meets Mizuki, a young girl with a thirst for life and adventure, he begins to develop genuine feelings of affection. We see that Kuze is torn between his innermost desire to live out the rest of his days in happiness, but doing so would bring inevitable heartbreak to this girl when his time finally comes. 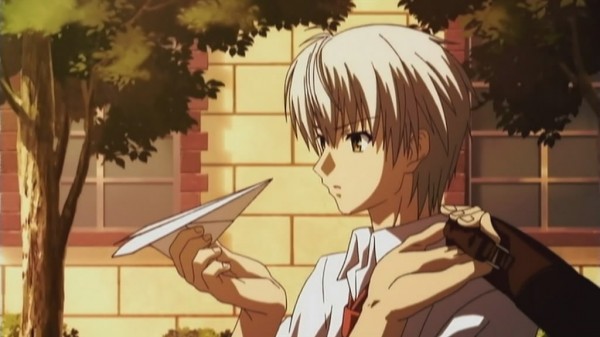 The second timeline, set in the past, is focused on a high school budding romance where our hero Himura Yuu encounters a girl from his own past named Yuko. Unaddressed feelings are shown to resurface, and while the two initially avoid contact with one another, circumstances force the pair to acknowledge both the romantic tension, as well as their painful memories of the past. Even when things start going smoothly for the pair, some secrets are still hidden between the two, and the story falls into a very VERY dark place.

As far as the plot of this series is concerned, the whole story feels rather oddly disjointed. The telling of multiple stories during the runtime of twelve episodes feels unnecessary, and greatly breaks up the plot flow of the two individual continuities. It feels like this series attempted to take a page out of Durarara’s book of storytelling by having multiple characters and story elements overlap in one ultimately grand structure. We know for a fact that this style of storytelling can be done well. However, the story themes in Tale of Melodies attempt to link these two continuities together in a rather weak and ambiguous fashion. Only a very few nods are made to the suggestion that these stories take place in the same universe. They might as well have been completely separate. 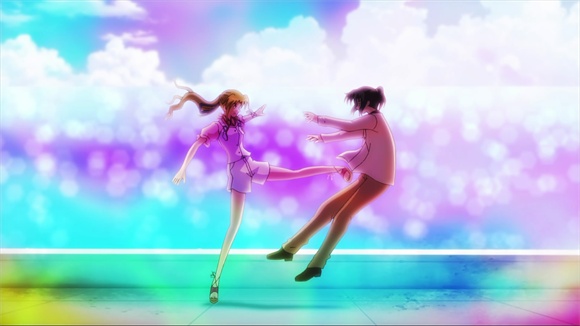 The plot lines feel quite removed from one another entirely. As a result of this, audiences are more than likely to gravitate towards one of the stories more so than the other. This reviewer found the past storyline involving the high school style romance to be initially bit more appealing than that of the dying musician. (At least until around the sixth episode, where things start to get pretty nasty.)  Having the second storyline jump up in the middle of a particularly dramatic moment really shatters the pacing. I can understand the artistic nature of what the series is trying to achieve, but on the whole it feels like it’s trying too hard to do so for the sake of being artsy.

This is not to say that the series doesn’t have its memorable or enjoyable moments. The ones that tended to stick the most were scenes such as Yuu coming to Yuko’s aid when the latter was beset by bullies, despite his own personal reservations about doing so. And while I wasn’t too fond about the plot of the present tense story in general, I found Kuze’s own self-sacrificial way of life rather admirable. However, few specific revelations and scenes in the two stories will really challenge some viewers’ ability to stomach numerous taboo themes. 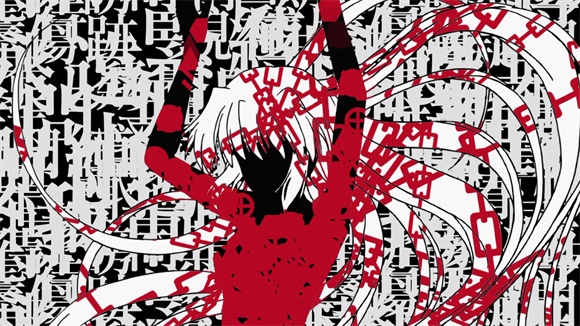 Characterisations of the main cast are a rather mixed bag of quality. On the whole, the entire cast feels damaged, for lack of a better word. All of the lead cast are defined by some horrible or unfortunate event of their past, and this angst is still carried over into their present characterisations. In Kuze’s case, this feels a bit more justifiable, given his condition, but for the other cast members, character development is pretty limited. Beyond this, the only character I really felt that broke this mould in a convincing fashion was Mizuki, whose upbeat mannerisms appealed far more than the monotonous angst of the other leads. Character development only really happens secondarily to romance development, and not in tandem.

The art house nature of Tale of Melodies is apparent throughout all twelve episodes.  Environments, features and characters are spectacularly detailed in the Blu Ray release. SHAFT has a pretty good history when it comes to art design of its characters and scenery. Even the “removal from reality” type scenes are drawn spectacularly well, never once leaving the viewer in a state of confusion. The juxtaposition of the real world and that of the inner corners of the mind is one that is made very subtly. 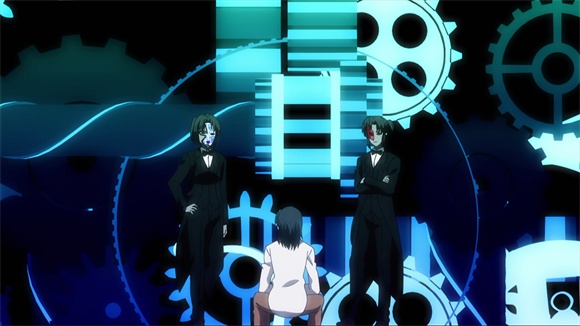 Naturally as a SHAFT anime project, the character drawings and animation are done in a typical moe style, with large focused eyes and well defined facial features. Emotional expression through this visual medium is pretty distinctive, especially in a series where the viewers are taken on something of an emotional rollercoaster in both plots.

The two different timelines of the collection are well divided visually. The visual distinction between the two was probably the most effective tool in discerning which continuity the viewer is facing. One the one hand, the visual style and colourings of the past timeline are generally darker in shading and colouring selection is a bit more monotone. The present timeline features a brighter and wider array of colour styles, most often used to reflect Mizuki’s bright and upbeat nature. However, the impact of this also serves to divide the two plot lines further from one another. Take that for what you will, however it does not detract from the fact that the drawing and animation style is certainly breathtaking where appropriate, and dark and shocking in other areas.

The musical score for the opening and closing theme songs were certainly exciting, providing a beat that anyone could tap their feet to. The mood set by the opening in particular sets the appropriate stage for the genre of the series. The background scores are decently considered, featuring a slow clam pace for the majority. The violin sections of Kuze’s story are superbly well done and speak as a powerful allegory for his own inner struggles with the notions of death and love. 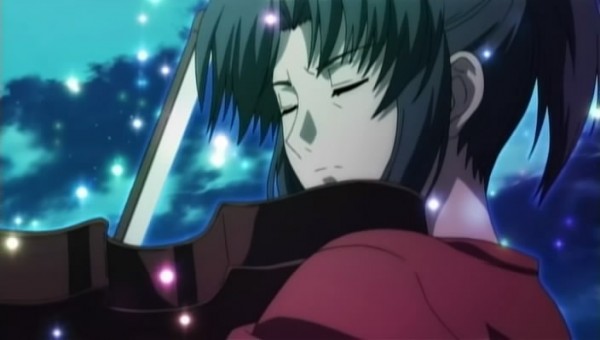 The English voice cast play their respective roles quite well, though the presence of the Japanese dub may hold a higher degree of appeal to many hardcore sub fans. This is especially true of the dialogue, where, despite the pretty solid performances of the voice actors, many of the lines sound rather clichéd in the English dialect. Overall however, the sound quality can’t be faulted here. 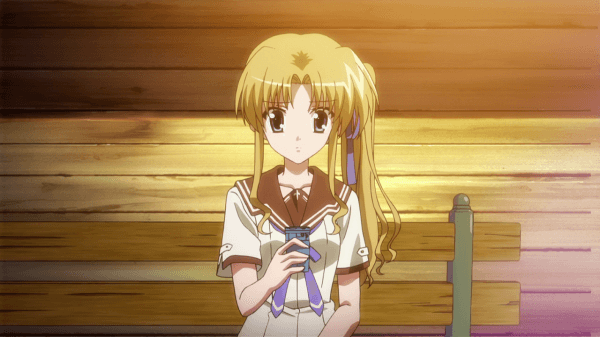 The extras section of the Blu Ray release features your pretty standard anime DVD release format. Of course there is a collection of trailers for other series released by the publisher Hanabee. The only other significant mentionables are those of the opening and closing sequences of the collection cut and cleared of credits. Certainly worth watching through, if for no other reason besides the addictively catchy theme songs. 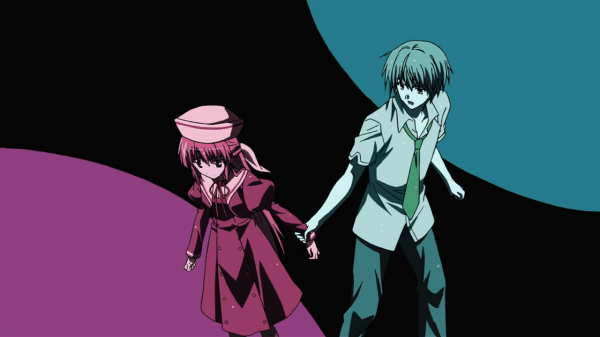 Creating a successful anime series that addresses the drama and romance genre is understandably a difficult one to perfect. In comparison to its predecessor season, Tale of Melodies is likely to hold a degree less appeal due to the presence of pretty powerfully dark themes and situations. Of course it is visually quite stunning as a whole, but the same level of praise can’t truly be aimed at the plot and characters.  Of course such opinions are subjective, and to art house fanatics and the dramatic at heart, Ef Tale of Melodies will deliver some pretty powerful and memorable moments. But to the average anime fan whose exposure to the dramatic genre is limited, it might not be their proverbial cup of tea.

For all of the impressive visuals and the high grade of sound quality, these features cannot hold up what feels like a disjointed plot as a whole. A word of the wise to the curious: approach this series with an open mind and be prepared for some very shocking stuff. The divide between artistically challenging and uncomfortably morbid is a line very thinly drawn.