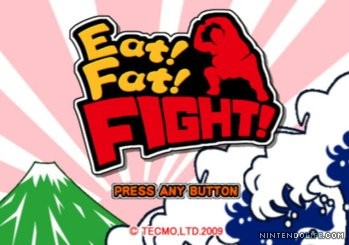 Overview:
Create a fighter, eat a LOT, get fat, train, and take on the best animated Sumo wrestlers in tournaments around the world!

Story:
The story for the game (what little story there is) is very simple: your character starts off as a thin, Juryo-class wrestler, and through a repeated sequence of eating, training, and fighting in tournaments you rise through the ranks of Sumo to the level of Yokozuna (Grand Champion).

During the tournaments you take on a sequence of wrestlers from diverse countries, with names to match. For example “Ayers Rock” from Australia, “Sprout” from Belgium, and “Tulip” from the Netherlands.

That is about as complicated as matters get – you eat, get fat, and then you fight (a lot!). In this case, the game is exactly as described in the title!

Graphics:
The graphics are very simple and cartoonish, which suits the game perfectly. The fighters are rendered in 3D, but are only seen side-on for the most part. The venues for each tournament, the backgrounds and the crowd are all drawn in 2D.

The 3D design of the fighters is rarely utilised as the game is mostly side-on 2D, but when you put on weight you do get a satisfying jiggling animation as your wrestler’s midsection expands.

When you create your fighter you’re given minimal ability to customise. Sex, a choice of skin colours, and the colour of your Mawashi (the pants your fighter wears) is about as deep as it gets. When you break out of the Juryo level (I did this after the first tournament) you can apply your own Mii to your fighter’s face, giving him/her that extra customised touch.

Tournaments are broken up by static, cartoonish cut-scenes of the nightly news, informing you of your current position in a tournament and your change in ranking at the end. While simple, these cut-scenes do fit perfectly with the style of the game.

Audio:
The sound is very simple (but not annoying), an electronic 8-bit sounding version of Japanese traditional music that fits in perfectly with the tone of the game. Add to that some nice grunts and slaps when you mix it up during the tournaments and that’s about as complex as things get.

Gameplay:
The main part of Eat! Fat! Fight! consists of fighting your way through 15-bout tournaments and coming out the other side with enough wins to see your rank rise for the next tournament. Apart from the Chanko minigame (in which you point the Wiimote), the game is controlled by turning the Wiimote sideways in the 8-bit old school configuration, using the D-pad and 1 and 2 buttons. 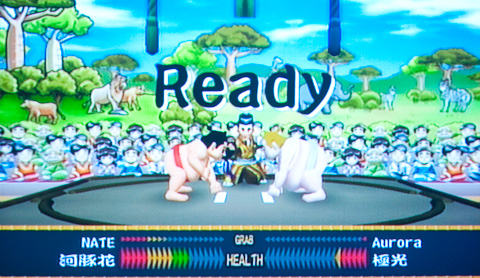 A tournament is split up into three sets of five bouts, and in between sequences of fights you have the opportunity to train your fighter and increase his attributes by playing one of four minigames: Chanko, Stomp, Strike, and Sparring. These minigames add a “RPG-lite” aspect to the game as you decide which areas to increase to improve your chances for your next set of bouts:

Chanko
Chanko refers to Chanko Nabe, the Sumo wrestler’s staple diet. This mini-game is similar in style to games like Bejewelled, with the object being to use your Wiimote to point at and select blocks of food that are adjacent to blocks of the same type. The more blocks in a group means the more calories your fighter gets – a good thing in this game! 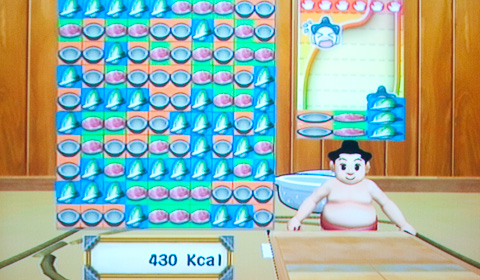 Training
The training menu gives you the choice of three mini-games: Stomp, Strike, and Sparring.

Stomp
To train your stomp (and gain the resulting boost to your “Guts” and “Grit”) you need to maintain your wrestler’s balance using the Wii-mote. The longer you can maintain that balance before you stomp, the more points your stomp will score.

Strike
The striking mini-game is a cross between a rhythm game and the barrel bonus stage from Street Fighter II. To increase your striking ability you need to strike a rice bale as it rolls towards you. Time it correctly and you’ll destroy it, but time it incorrectly and it will explode on your fighter’s face!

Sparring
Sparring is basically a time-limited version of the tournament fights, but once you defeat an opponent another immediately jumps into the ring. These opponents gradually increase in difficulty, with the session ending when you are defeated or when time runs out.

The tournament fighting system is quite good, and although it’s simple to dive in and be competitive immediately using the thrusts and strikes, the lifting and throwing aspect of the game takes some more time to master. If anything, taking the button-bashing approach and striking at your opponent until they are forced out of the ring is TOO easy; you can finish most tournaments with a 10-5 record or better using strikes alone.

The wrestling system involves clinching your opponent, then taking advantage of the motion-sensitive capabilities of the Wiimote to lift them or perform one of a large variety of throws. “Super” throws are also possible, allowing you to finish your opponent with exaggerated results, such as burying their head in the ground or tossing them high in the air.

It is worth mentioning that although the tournament fighting is good fun, it is quite repetitive, and the button-bashing style of play will take it’s toll on your right thumb if you choose to play a few tournaments in a row!

The lack of true multiplayer is also a downside, only 1 or 2 players are supported. A “create your own tournament” mode where you could line up bouts for 8-16 friends would be a welcome addition. 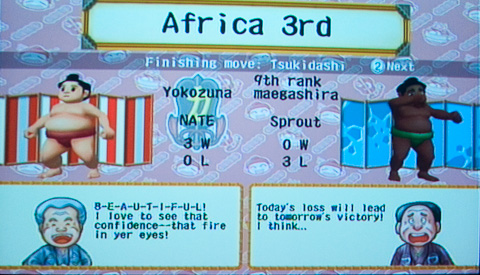 Overall:
Eat! Fat! Fight! is a fun little game that is certainly good for a quick bash now and then. I have a feeling that it will get repetitive very quickly for some people, but if you’re a fan of the sport of Sumo it’s probably the best (only?) game out there. It’s a very easy game to slip into, while at the same time offering a bit of depth and a increasing level of difficulty for players who want to explore it further.

Here is the trailer for Eat! Fat! Fight! below: