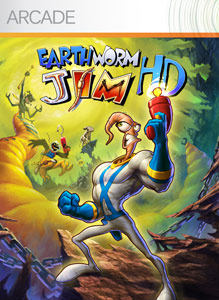 Story
“Rediscover the grooviest action game of all time in full hi-def glory with Earthworm Jim HD! For the first time, grab friends and combine your wormy powers in four-player co-op locally or online. Explore all the original levels, experience wild gameplay, and rock to the remastered cult soundtrack. There’s even more to discover with brand new enemies to blast into pieces and never-before-seen locations. Now that’s groooovy!” [Via Xbox.com]

There is a slight story contained within Earthworm Jim HD, but it is miniscule. There was an earthworm named Jim that was being attacked by a bird. Elsewhere there was a space battle, and an alien shot down another alien causing an awesome spacesuit to fall from space right onto the earthworm. The spacesuit causes the earthworm to become awesome and equips him with a pistol. Earthworm Jim then goes around saving the world and the princess. Yes, there is a princess supposedly.

The game Earthworm Jim HD is quite disjointed and the only travel sequence is a repetitive Warp Speed rocket level. At least there is something to signify that you are going to a new level. Randomly appearing inside the lower intestines after being underwater wouldn’t make any sense. You will go from a junkyard to the bowels of hell in a heartbeat, and it is never explained why but that is just part of the charm of Earthworm Jim HD. 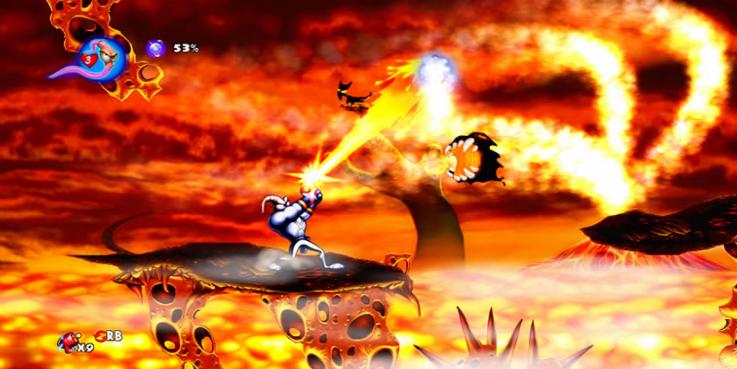 Gameplay
The gameplay in Earthworm Jim HD is straightforward, but not always easy. The goal of every level is to either get to the end or beat the boss. Each level is extremely weird, but in a good way. Distorted levels and scenery creates extremely interesting levels. From a hi-tech computer lab with robot spiders, to an underwater sea lab with giant hamsters; there is a huge amount of locations that you will explore as your progress to beat the game.

There is a singleplayer and a multiplayer mode in Earthworm Jim HD. The singleplayer campaign can be beat in under an hour if you rush through it and the length of the multiplayer levels are dependent on if your teammates are good or not. Multiplayer is a lot of fun and its addition to Earthworm Jim HD is welcomed. The game will frustrate you a lot, even on the easier settings. A majority of the game consists of running and gunning down enemies, but there are a few levels where you pilot a submarine and a bunch of other levels where you will race through space. The space races actually get pretty annoying, but if you win you don’t have to fight the Psy-Crow boss over and over again.

The developers have tried to keep the fans of Earthworm Jim happy, and in turn haven’t changed much in the overall game. They added a multiplayer and also 3 bonuses levels (which have a special guest appearance which is extremely funny, but I’m not going to tell you what it is); however, the overall experience is exactly the same but on a bigger screen and with better graphics. If you loved the original game this remake won’t disappoint, but on the other hand if you are new to the game it doesn’t compete well with modern platformers. The experience is solid but does absolutely nothing to try to bring in new players.

The major thing that hurts this game as a platformer is the annoying controls that haven’t changed from the original. Shooting your gun, using the submarine, or even using your whip move are all very annoying. They are hard to aim or control and causes a great headache trying to use them. While firing the gun or using your whip move you will miss a lot. The easiest work around for the gun is to start firing it and then slowly move the joystick so that it aims towards someone and hits them hopefully. You also can’t jump and shoot at the same time. The whip on the other hand is a different matter, using it will just require a whole bunch of attempts because it has a mind of its own. You may be aiming one way, but where that whip wants to go is most likely not the same direction.

Audio & Graphics
The audio in Earthworm Jim HD has all been remastered for this HD remake. The voice acting as well as the soundtrack will remind classic players about the original version while still sounding good enough for new players to enjoy the experience. The graphics have also been redone in hi definition. While the game looks fancier then the original the levels are still confusing and hard to master. Like the original, it is still difficult to tell what parts are the actual level and what parts are the background. For instance, some spikes hurt you while others are located in the background as scenery, new players will have trouble telling the difference.

Achievements
The achievements in Earthworm Jim HD are varied and challenging. A majority of them can be achieved by simply doing a playthrough on normal. There are also a few online achievements that can be boosted or achieved normally. The two hard achievements that will take time are the “Superhero!” and “Earthworm Never Dies” achievements. These two achievements are very hard, and require you to beat the game on the hardest setting in a certain amount of time or without dying. They are possible, but will require a lot of patience and restarting. Other than those two, the achievements are completely manageable and should be an easy 130g at least.

There are also 2 avatar awards in Earthworm Jim HD, see the video below