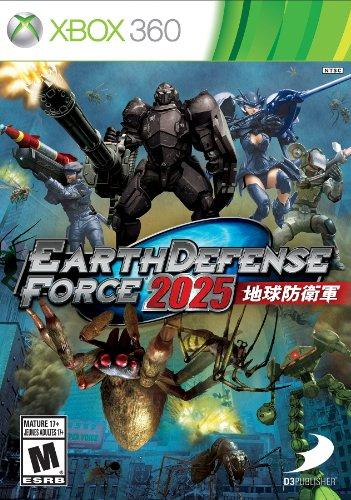 Overview
Earth Defense Force is a funny series. No, I am not talking about the humor (which is on point and often hilarious), but funny rather for the fact that it has a cult following for simply going outside of the norm. Instead of making a war shooter about reality, Sandlot have done the opposite and changed the formula to their liking, built around short but epic battles with giant, beastly bugs. Forget that the slightly mediocre and rather forgettable Insect Armageddon ever released for a second, and think back to the first release, which was Earth Defense Force 2017. That is kind of what the developers want us to do with the latest Earth Defense Force 2025, as this title all about moving on in a big way. The features are broader, the bugs are nastier, and the campy dialogue is still cranked to the max. Is that enough, or does this follow-up prove that some titles are just made to be a flash in the pan? Let’s find out. 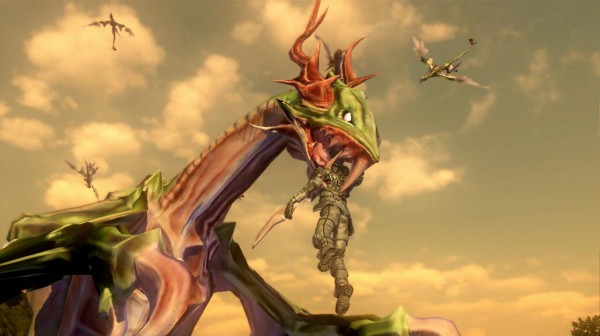 Story
I almost feel like giving an opinion about the story to Earth Defense Force 2025 is doing it a disservice. You are not supposed to care, and this title doesn’t want you to care – as it simply stitches together 2017 with this romp and moves about its day, without a worry in the world. Its been seven years since the last attack, and your squad must save the world from giant insects, robots, reptiles, and plenty of other creatures before everyone’s doom is met.

Yep, that’s about it. Its kind of like a Godzilla movie with no script and a lot of extra costumes. It looks so bad its good, and the player simply gets to enjoy themselves by playing a minor part in a role among a full feature B movie. Before anyone thinks I am trying to take away the awesome stylings that EDF 2025 brings, I’m not. I’m simply putting down my own perception, as I found the whole plot to not really move – yet still provide blast of organized chaos that truly makes the charms from the team involved shine.

Gameplay
This is where it all comes together. As I mentioned, you are of of the Earth Defense Force. Not so much a starring character, but a member of a winning team – nevertheless. Players from the start can pick from one of four classes of soldier. The most basic is the Ranger class, which can utilize a heavy amount of weaponry such as various guns, rocket launchers, grenades, and also take advantage of the many vehicles within the game. Next up is my personal favorite, which is the Wing Diver. This class can take to the skies due to their jet pack for a limited time, scoping out the area and coming from above with quick attacks. 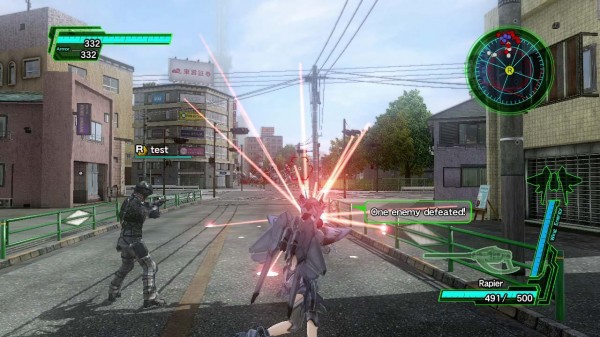 Air Raider is that class you don’t really want to be stuck with – as the action is less involved. Ordering massive air attacks, healing (while offering protection), and bringing in toys for the Rangers to play with in the form of vehicles may sound strategic, but not being at the center in this chaotic battlefield is just a bit stale – to put it nicely. The fencer rounds things off by offering the heavy artillery. Slow – but armored, waddling – but strong, this class acts as a fine balance to the squad, and while it isn’t fun to play as that Air Raider, multiplayer is better for each as everyone’s task at least feels important, even if the enemies seem to fall in the same format with little strategy needed. 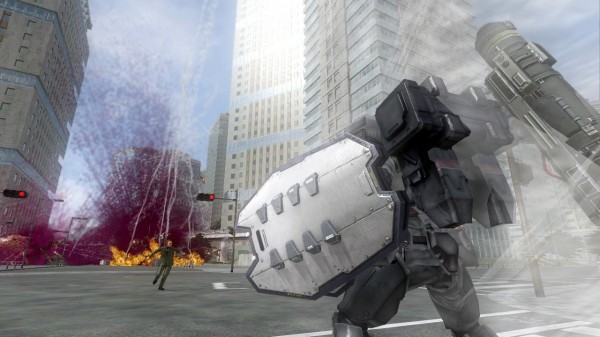 The controls, much like in past EDF installments are still tight and functional, providing an easy scheme to wrap your head around for a fun and simple experience. The game is in third person (but the perspective can be changed), and revolves around a mission based scenario, where the player must trek through cities with their squad, freeing the poor townsfolk from the grasps of waves of enemies until each are obliterated, one by one. Sure, there are some objectives – but even breaching new areas and destroying bases doesn’t feel too involved, as the game never seems to try to get the player to focus anything but the destruction. You get a ton of weapons to toy with and with each class, this adds up to one of the broadest loadouts ever for a game of this span, so that really isn’t a bad thing. Remember the classics where you were provided with a decent amount of weaponry, but all that really mattered was to get in there and kill? Earth Defense Force has and continues to go with that gimmickry, not allowing itself to be fully realized in order to provide a more enjoyable and mindless time for every player who joins in. 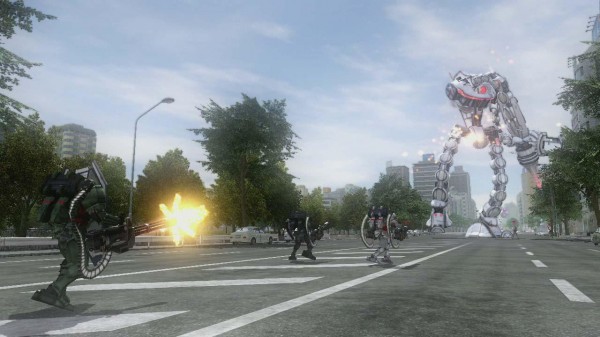 That is both a curse and a blessing, as not attempting to break out of the mission-based formula hurts the experience. I understand what Earth Defense Force 2025 wants to do, and it achieves its mission of nonsensical combat without question. There are times where the glitches can come in and literally break the game, but this is a “get in there and go!” themed thrillride, and starting over due to a real bug isn’t that frustrating. What is frustrating are the thoughts I felt while getting to the latter stages. The variation of enemies kept me satisfied personally (as almost everything is over the top, especially later in), but not having enough of a change of pace made me feel like I was doing the same thing, over and over on foes that felt different to fight, but came with the same result upon defeat. Sure, its rewarding to take down a bizarre dragon or an annoying spider that leads to death quickly, but you can only have so much of boom before the explosions become expected and predictable. Sure, this game has a ton of content that will keep you interested, and customizing your character with unlocked weapons while playing with the insane vehicles dropped is delicious, but why not offer just a fraction of substance to make the meal filling? 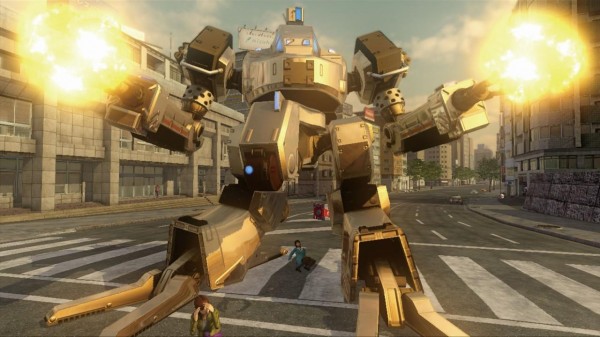 Like most arcade shooters, this one is built for re-playability, and as I mentioned, that comes quite easy due to the amount of content included. Split-screen multiplayer is almost as fun as it was to play titles like 007 and Turok with friends, and the online function ran smoothly during all of my many experiences with it, with others joining in on some intense missions where thoraxes fly like graffiti, raining from the sky. This is the kind of game that requires little brain activity to play, and almost feels soothing due to how mindless this piece of entertainment actually is.

Visuals
Now we get to the part where things go south, north, and all over the place. The visuals in Earth Defense Force 2025 are not great. The environments lack detail, there is a heavy amount of clipping, and the enemy designs, while still eye-catching, are a bit basic overall. That isn’t too much of a problem as the game is still a blast to play. Until you get a ton of enemies on the screen at once, that is. You see, EDF has always had a framerate issue, and this follow-up is no different. At times, the game comes to a complete crawl, which takes away that soothing factor I spoke of and results in more of a headache with enemies slowly running through walls and each other to get to you. The spider that is new this time around also suffers, as even though it presents a fun challenge of dodging a dangerous, spitting web, it actually is broken with the web going through walls and buildings that should be protection otherwise. 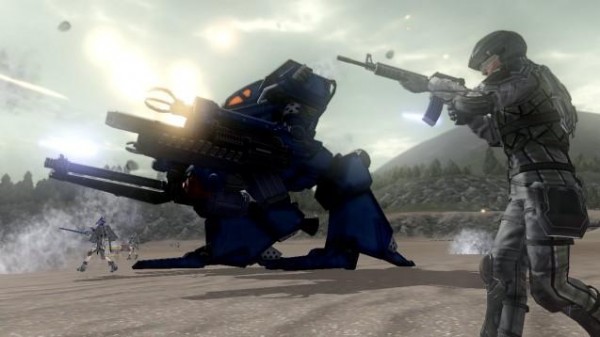 Audio
The sound I actually liked. The soundtrack is generic and easy to tune out, but the voiceovers and dialogue give EDF 2025 a bit of a boost in the charm department. Citizens scream bloody murder while running on the streets, and your team are known for making quick and obscene one liners that really highlight the tongue-in-cheek nature that has made this series continue to appear in the west. The enemies themselves don’t really do much to capture your attention with sound effects even though the hisses and scowls are present, which is only a light offense as some more polish in that area would have definitely provided a bit more insanity for players to chew on.

Overall
Earth Defense Force 2025 is a video game that wants you to think it is nothing more than a video game, and I am ok with that as this industry needs to return to that mindset with development. There are no moments of emotion, there are no brilliant dialogue sequences, but instead just a prime focus on destroying enemies and watching them fall into a million pieces. Compared to the rest of the series, 2025 sits with, but not above its predecessors by delivering more options to fans, while stomping on its own foot with framerate problems and clipping that take a bit of the chaos into the wrong direction. Regardless, you will find more fun than frowns in this package, along with a lesson that not everything needs to be a masterpiece to be hung in a museum.