Anyone who remembers the classic 16-bit days of gaming in the early 90s or Shoot ’em ups will get a kick out of Earth Defense Force, an iPhone remake of the original 90s SNES game. Aliens have invaded earth and it’s up to you to defeat them.  Much of this game has been tweaked from the SNES original which may distance the purest out there, but those looking for a good shooter and old school nostalgia will be pleased here. 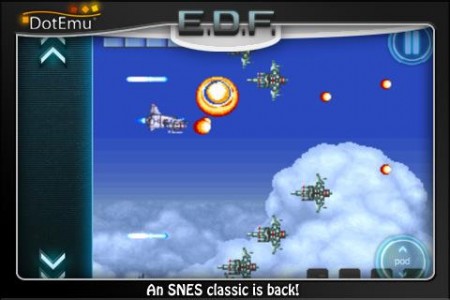 The game is very much an arcade shooter, even the menu screen a mock up of arcade system. The game provides two game modes, Freeplay and Arcade to play though six stages. Freeplay is a “training mode” players are given unlimited health to blast through the levels, great for those on-the-go and short gaming sessions. However in freeplay, player progress is not tracked and to unlock new levels and weapons players must play though the very challenging arcade mode, and I mean “very challenging” this game gets very hard in the later stages. Players are only given two credits to play through the entire game, luckily however each time you unlock a new stage you can start from that point. There are a number of major game-breaking glitches in this game, from time to time the game freezes midway through a boss battle and most annoying, the game will freeze if you have more than one finger on the screen when pressing the continue button after you die. This caused much frustration, exiting and re-entering the game. Hopefully an update will be released soon to fix these issues. 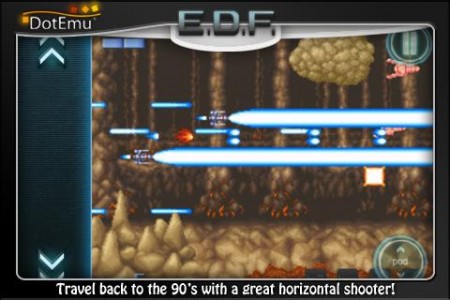 This game can get very frustrating in later levels as it gets very hard due to a very steep learning curve, which I guess is why the developer included Freeplay mode. Earth Defense Force is a retro shooter which requires many play throughs just to memories enemy wave patterns along with trying to get the highest score on the leaderboard. The game requires players to both shoot and dodge bullets, this makes up the core of the gameplay of the six stages with an added boss fight at the end of each stage. Players are rewarded for their efforts by unlock new stages and weapons. Players should experiment with the different weapons as each plays very differently from one another. As players progress through the game, their weapons level up becoming more powerful and gaining a different firing mode. Switching through the firing modes can give players the advantage and additional manoeuvrability to dodge incoming bullets. Thankfully, the game offers auto-firing as part of its default control, which may be turned off if the player chooses to. Controls are smooth and work well in manuring your ship which is so vital to the game. 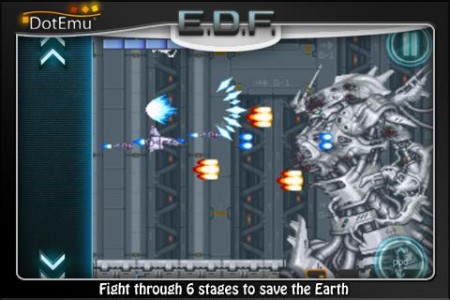 Earth Defense Force retains its retro look and feel, which is great. The 16-bit graphics and audio are a great through back to the classic of the 90s. The soundtrack brings back a lot of memories from that gaming era. The soundtrack itself is worth the price of admission, its very 90s techno, electronic and unmistakably retro with each level packing its very own unique level music. The graphics and animations themselves look very smooth, retaining that retro feel without slowdown.  You’ll be fighting some very inanes looking robotic bosses and super alien ships across the game’s six stages.

Earth Defense Force is good, that is when it works. The retro shooting is fun, mixed in the dodging and a great classic soundtrack. However it’s unfortunate that a few major game braking glitches brings down the entire experience, freezing because you had more than one finger touching the screen when pressing continue. Asides from this, Earth Defence Force is a nice through back to the classic 16-bit era of gaming with its graphics and soundtrack. It isn’t perfect but Earth Defence Force is still very much playable and is definitely worth checking out for those who love a challenge or just like retro gaming. 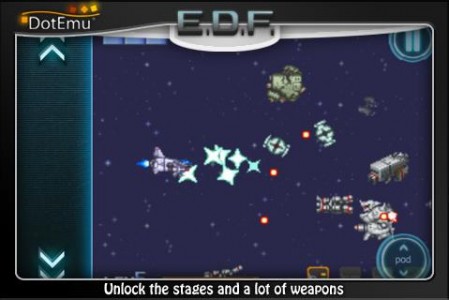 I give Earth Defense Force for the iPhone and iPod Touch: