Puzzle games are a huge thing on mobile devices, they’re easy, levels are simple to make and easy to add on to if the developers ever want to introduce some in-game purchases. In short, they are just the easy option for game developers to pursue, so it’s no surprise that the mobile gaming market is quite full of such games. It takes some serious individuality to be able to have a game rise above the rest and set itself apart. 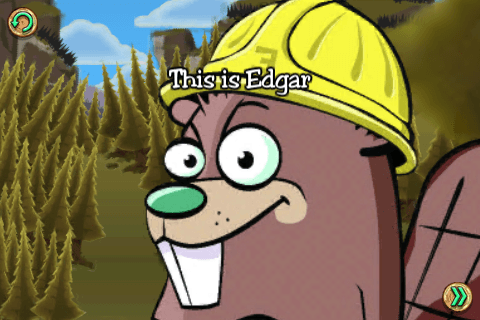 Eager Beaver is about a beaver called Edgar who is just so damn good at building dams that all the other beavers are super lazy and let him do all the work. You play as this master beaver, covering for everyone else as water threatens your habitat and you use your handy little crane to drop different shaped rocks to stop the flow of the water. The crane rotates each stone, and can be moved around the screen, which are both aspects which become important so care is important. While this is not really a realistic representation of beaver’s building dams, that is where the puzzle part comes in. 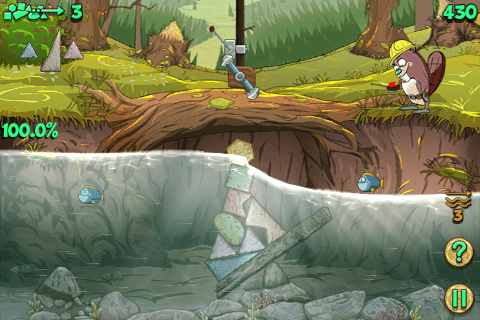 For each level you are given a mark out of three stars, depending on how many rocks you had to use to stop the water. The minimum for if you successfully stop the water is one star, and if you only use a few of the stones and have quite a few left over and then you’ll probably get three stars. 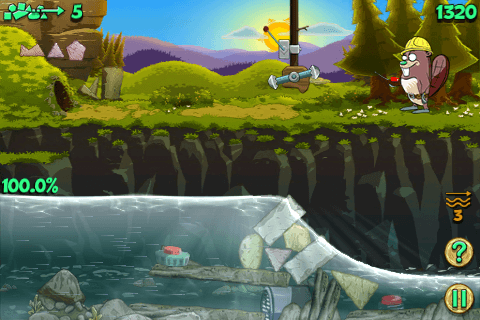 The star system works under one of my preferred system, in that to progress onto the next village you have to get thirty stars, but you can earn far more than thirty in the levels. This basically means you can skip a level if you can’t finish it, or just leave it at one star if you can’t accomplish any more (or can’t be bothered). There are ten levels per village, with five villages, and if you really can’t get past a certain village or stage then you can unlock all the stages and villages with an in-game purchase of $0.99. 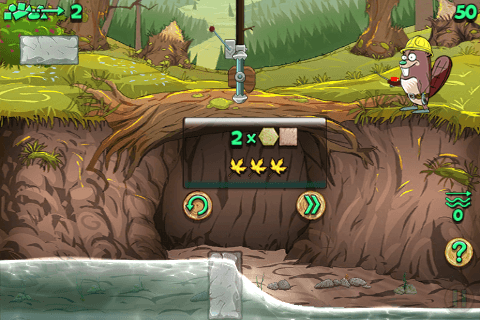 There are a few different aspects you have to get a handle on to successfully progress through Eager Beaver. The first is the ‘rapids’, or the speed of the water. Often this will cause your stone to move, and if the water is deep and the stones are small then they will generally carry quite far. Then there’s the fish that swim around and love to either bump into the rocks and throw off your carefully balanced piles, or start to eat them. You can also stun these fish by dropping rocks on them, although that will cause them to bounce and fall elsewhere. If you practice enough you can use this to your advantage, but prepare for some frustration to begin with. Plus there are also explosives that go off if you drop something on them, magnets, and fans that you can set off by pressing down on a button in the map. And, on top of all of these features, the rocks you have to drop are completely random and can go from some nice square or rectangular ones, to random rusty items that don’t really seem like they should be being dropped into a river. 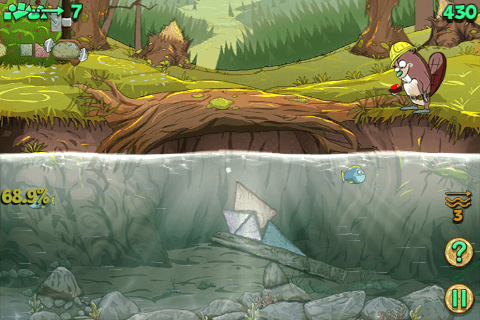 Each puzzle is fairly interesting and does involve some thought, although with some levels you could basically just drop each stone on top of each other and it would eventually result in stopping the water.

Eager Beaver has really good graphics that pop and look quite crisp on the screen, while also being super cute. The cartoon style of everything really suits the game well and gives it that extra little cute factor that is always a big thing in mobile games. 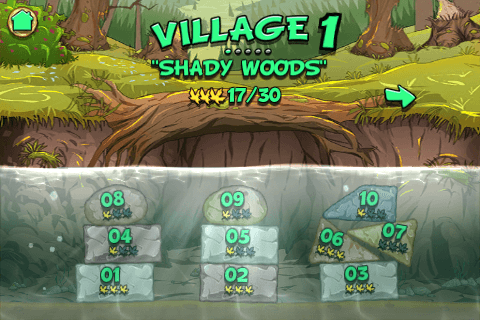 To be perfectly honest, the soundtrack reminds me a little of the Sims. It has that little adventure-like, sweetness to it that goes with the visual style and the general feel for the game. It doesn’t distract from the game or get annoying, which is something of a rarity in apps.

Eager Beaver is a fun little app, with enough of a challenge to keep you interested and thinking up ways to take on each level. With a decent system for game progression, and some interesting features and a good look and feel for the game, this is certainly a buy if you like these types of puzzle games. As to whether it sets itself apart, it isn’t ‘different’ so much, but it certainly is one of the better options to pick if you like this genre.