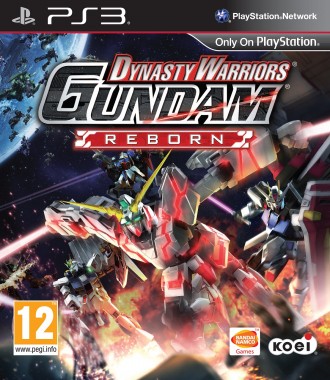 Have you ever played a Dynasty Warriors game before? Are you a massive fan of the Gundam series? Well I have never played Dynasty Warriors or seen a single episode of Gundam so picking up Dynasty Warriors: Gundam Reborn was an entirely new experience for me, and one that I am quite happy to say that I enjoyed. The story is a little unfriendly to newcomers of the Gundam franchise, but the gameplay is pretty solid (although a little simple) and the visuals really fir the aesthetic of the world quite nicely. 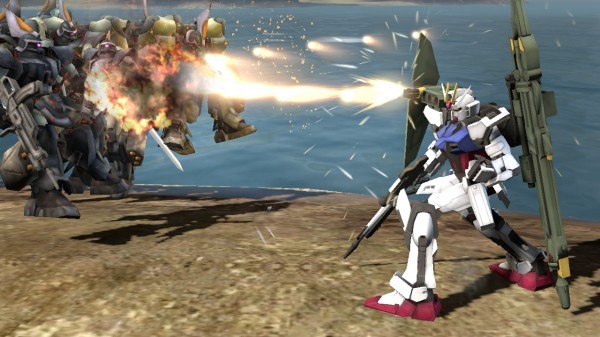 Gundam Reborn’s Official Mode takes players through some of the key moments in the Gumdan franchise. For those of you who have been watching it for years, you will likely recognize that the chapters take place in both the Universal Century and the Cosmic Era timelines. The Universal Century “episodes” retell the original Mobile Suit Gundam, Mobile Suit Zeta Gundam, Char’s Counterattack, and Mobile Suit Gundam Unicorn. The Cosmic Era storyline covers Gundam SEED and Gundam SEED Destiny. For those new to the series, it will provide a bit of a crash course through the Gundam universe, however if you are like me and are brand new to the franchise, you will probably know very little more coming out of the game than you did going in. 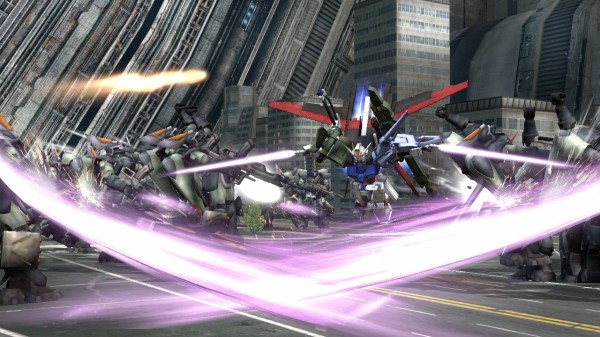 To fully grasp the story, you need to be well versed in Gundamn lore as although the game does go through the major events of the featured series, the fact that the game’s audio is entirely in Japanese and the highly condensed nature of the storytelling means that you will likely have little to no idea what is going on. Having never seen an episode of Gundam in my life, I can attest to this fact; I only got a fleeting understanding of the series and its characters. 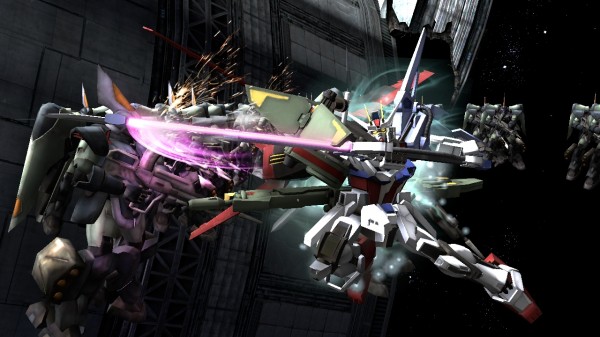 Like other games in the Dynasty Warriors franchise, Gundam Reborn has you squaring off against hundreds of enemies at once. The action is fast paced and keeps you enthralled without ever getting too boring. Although the game isn’t all that deep, it is still a lot of fun.

Each Mobile Suit has access to a variety of different melee and long-ranged attacks that can be combined together to create attack strings and deal devastating amounts of damage to the enemy combatants. The combat is deceptively simple, offering a variety of different moves and attacks but all are really simple to chain together, making for a game that is easy for anybody to pick up and play. As you progress through the game, it becomes clear that just using your suit’s charged blaster shots is the best option as it can clear out entire squadrons of enemies with a single shot. It becomes very easy to just rely on this tactic since it is just that much more efficient than anything else you have available to you. 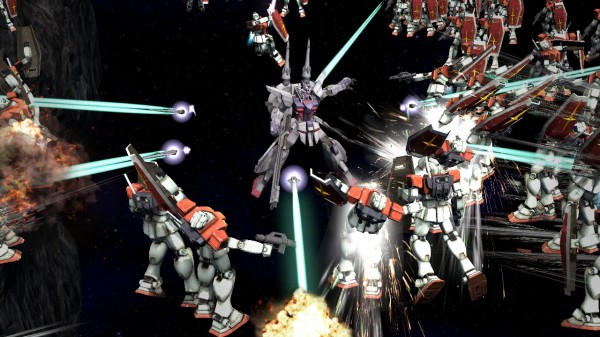 Despite being almost entirely overwhelmed by enemies, the game is never particularly difficult. On normal difficulty you will find yourself rarely even getting hit, let alone being in a situation that actually has you worried whether or not you will survive. Hard mode offers a little more challenge but all in all it won’t change how you play the game all that much.

You can level up your Mobile Suits and pilots using a variety of different XP and rewards systems that the game implements. The Mobile Suits can all be upgraded by finding new plans. Upgrade Plans will offer a bonus to one or more of your Suit’s components. At the same time, you can upgrade your pilot’s abilities to make them better in combat.

The upgrade system for both suits and pilots looks intricate at first glance but is sadly quite shallow. There is no real customization for the suits or the pilots aside from which of a select number of skills you choose to equip. The whole game can really be summarized as looking a lot more complicated than it really is. The combat, the upgrades and the mission variety all suffer from it. 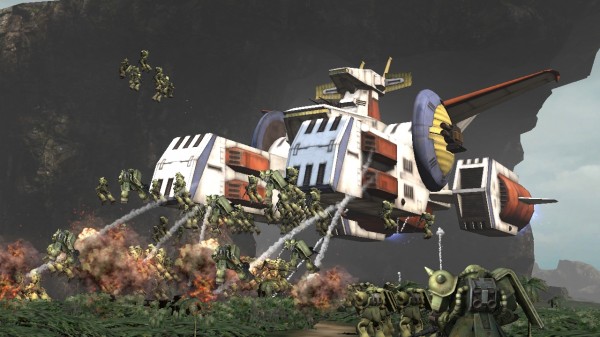 The visuals for Dynasty Warriors Gundam Reborn are (as far as I can tell) quite reminiscent of the original TV series. I know that previous installments have gone w more cell-shaded route with their character designs, but Gundam reborn has gone with a more realistic approach that fits the whole theme of the show a lot better.

Cut scenes are in many cases taken directly from the original anime and slightly touched up to be a little cleaner. Sadly, many of them are not fully animated and it is oftentimes screenshots taken with audio dubbed over the top. The game’s few fully cinematic cut-scenes are done in-engine, and don’t run very long.

What is probably the most impressive part is the fact that there can be more than 200 moving units on screen at any time, all able to move in 3 dimensions and the game never suffers even the slightest bit of lag or frame skipping. Even when a charged up blast from your Gundam causes an explosive domino-effect through the armies, the game kept its steady frame rate. 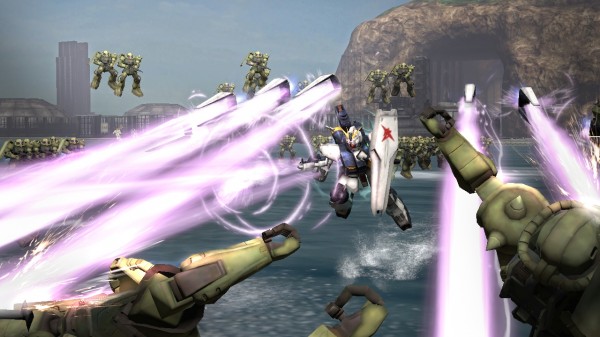 All of the voice work for Dynasty Warriors: Gundam Reborn is in the original Japanese with no option available to switch over to an English Dub. This provides a sense of authenticity to the game, and without a doubt those fans out there that believe anime is the best when it is in the original language will love this feature. However, the lack of an English track can make it a little difficult to get a proper grasp over what is going on in the narrative.

A lot of the game’s story is told in the midst of the intense battles, meaning you would have to take your eyes off the action just to read what is going on. Oftentimes you can’t do this, so you end up missing huge chunks of the story. I’ve never seen Gundam so I can’t speak too much about the actual voice work in comparison to the show, but as a part of the game I rather enjoyed it. 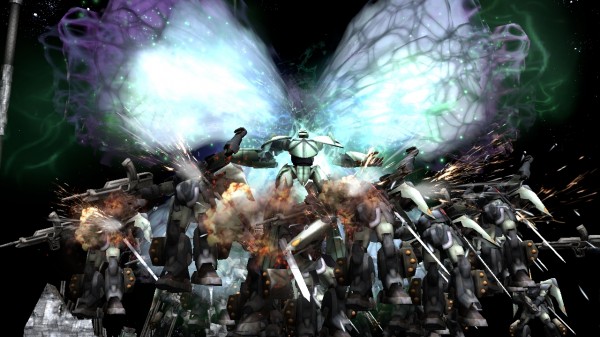 Dynasty Warriors Gundam Reborn was my first foray into the Gundan and Dynasty Warriors worlds and I can honestly say I was impressed. As a game it was rather simple but still an enjoyable experience. Although on the flip side, the forced Japanese language and the way the story is presented make it a little difficult to fully grasp what is going on. All in all however, the game provides a fair bit of mindless fun and I will definitely be keeping my eyes open for future installments.