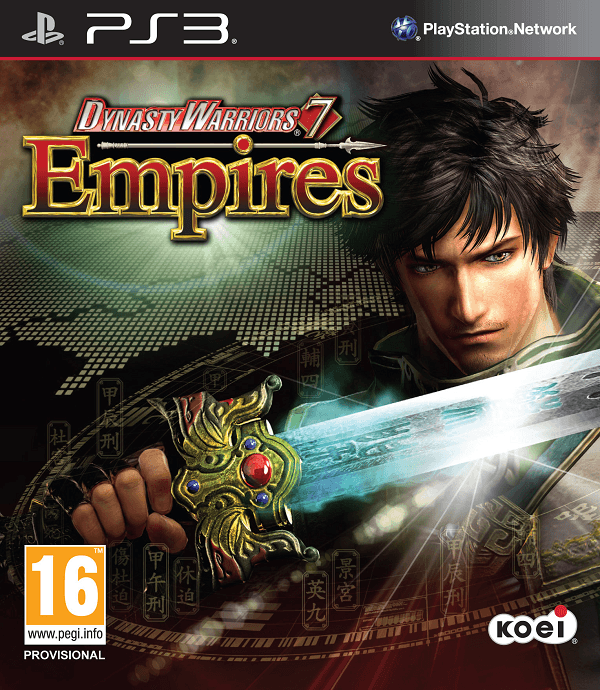 Story:
Unlike past Dynasty Warriors titles, the story for Dynasty Warriors 7: Empires is more of a vague framing for the player’s  own journey. Rather than following a specific nation or warriors’ journey throughout the famous battles in the Romance of the Three Kingdoms saga, players simply choose a famous scenario to base the empire mode on. 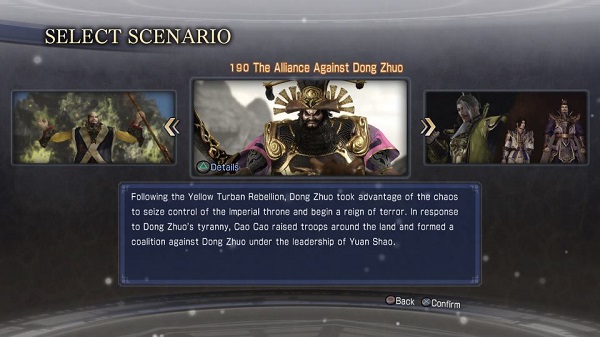 These scenarios, such as the Yellow Turban Rebellion and more instead frame what is ultimately the player’s own journey. When selecting a scenario, players can choose to play as any warrior they feel like, including rulers such as Cao Cao and Liu Bei, strategests like Zhuge Liang, and even famous warriors such as Lu Bu. Of course you can even take your own custom character to battle as well.

What starts from there ultimately depends on you’re selected character. Custom characters start as vagabond warriors while Liu Bei may be running a number of territories already. Depending on your actions, various story events can take place, such as the burning of Cao Cao’s ships in the Battle of Chibi, the united battle against Dong Zhuo and more, however players can choose to take part in these famous events or simply let them pass by if they wish. 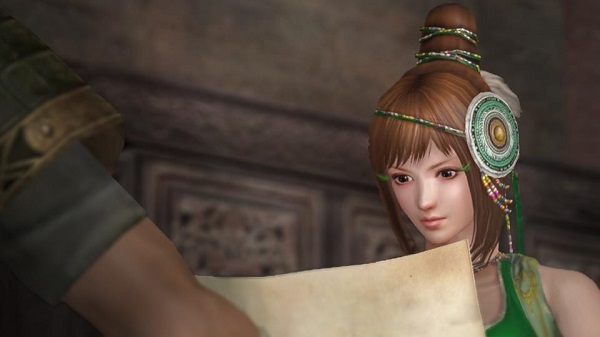 Ultimately, the story for every mode results in the same sort of ending goal, but it’s been said that the journey is what counts, not the destination and with the various roles and amount of characters to choose from and interact with in DW7: Empires, players can experience different outcomes each time, whether they choose to take fate into their own hands or simply rule under someone else. That being said, it also means that those looking for some sort of structured storytelling will find that DW7: Empires is sorely lacking in that regard.

Visuals:
As far as the graphics for Dynasty Warriors 7: Empires are concerned, there seems to have been a little bit of improvement over the original DW7 title. The title plays very smoothly for the most part, though soldiers appearing out of nowhere is a common issue.  It is also worth noting that twice the game froze up and had to be restarted which can be quite killer thanks to the fact that the title does not autosave. 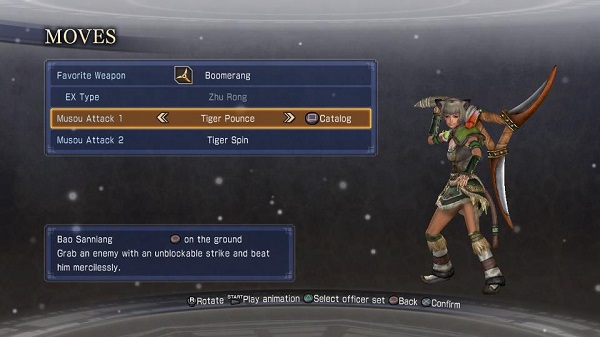 Anyways, the various battle fields of the Dynasty Warriors series have never looked better and everyone’s favorite characters have returned looking pretty much the same as they have before with no major graphical improvements. It is interesting to note however that the “Edit Mode” which allows the player to customize their character is quite extensive. The character creation boasts numerous hair styles and colors, various facial and body adjustments and accessories and tons of clothing that is instantly available and plenty to be unlocked through play. As such players should be able to create nearly any character they feel like given how much depth the studio has added to the game’s edit mode.

Audio:
Unlike Dynasty Warriors 7, DW7: Empires does not feature an English dub at all and instead gamers are left with only the original Japanese voice work. This isn’t much of an issue overall though thanks not only to the fact that the original Japanese cast has provided an excellent dub of the game, but also that the company has provided a decent translation for most of the in-game dialogue. It is worth noting though that some phrases, such as those uttered when giving officer’s orders on the battlefield, have gone un-subtitled. Along those lines it also seems that some translations were dumbed down for the sake of quick-reading on the battlefield compared to the spoken Japanese lines. 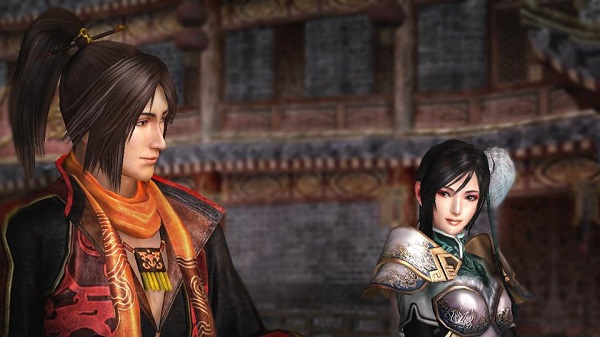 As far as battlefield music goes, there is an extremely large selection of music for players to choose from. Before any battle players have the option of selecting a specific track and many favorites from past games have made it into DW7: Empires which means that players have quite a selection to choose to listen to as they destroy enemy armies.

Gameplay:
At it’s very core, DW7: Empires’ gameplay hasn’t changed too much from mash square and triangle to kill thousands of faceless soldiers and the occasional famous officer or ruler. However Empires gives players more than just a battlefield to fight upon, it provides a decent offering of strategy, planning and macromanagement as well.

Now once the player has chosen their character or created one in the aforementioned extensive create a warrior mode, players choose a scenario to start out with. These scenarios, again as mentioned earlier, simply provide frame-work as to how the various territories of China are broken up and who is ruling at the start. The final goal of each of these scenarios lies in uniting all of China under one nation that is either ruled by the player or by the lord they choose to serve. 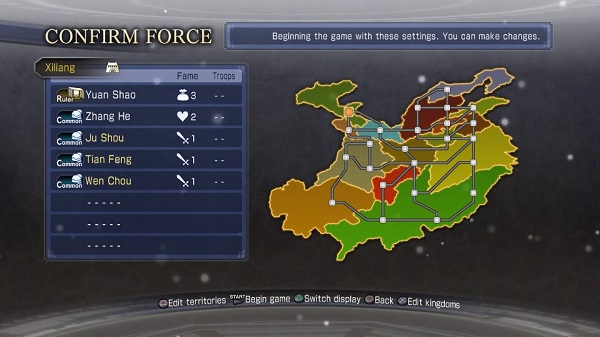 There are a number of ways that players can choose to make their way in the world of DW7: Empires, they can start as a free officer who can freely operate how they wish, joining battles to gain money and fame which can allow them to join as an officer to an already established nation or raise a banner of their own, or simply start as a ruler/officer/strategist in a nation that is already well on its way to conquering China.

These various choices also give varying levels of freedom. Solitary soldiers can look for other warrior’s to befriend and form a ragtag team of warriors that cannot own land without establishing a banner of their own but can enter skirmishes and sign up with another empire while officers also cannot instigate battles freely and have to take orders outside of battle to complete various tasks while strategists and rulers can invade nations freely and make use of political maneuverings to make battles easier or obtain allies. 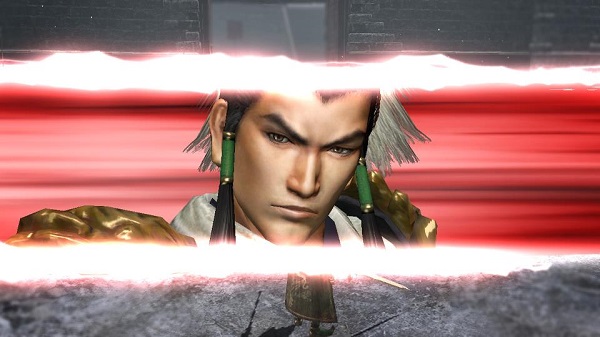 One thing that is interesting, and directly affects the strategies, or strategems as they are called in-game, is a personality system that gains points depending on your actions. Support shady businessmen, accept bribes and execute prisoners for evil experience, while slaying tigers threatening a village can earn bravery points. The higher your level in various categories results in different strategems being unlocked for use in and outside of combat. It is also interesting to note that players can go directly against history here and create a kind and compassionate Lu Bu or a dastardly Liu Bei if they so choose.

These numerous choices give players countless options as to how they want their warrior’s story to be told and the freedom to do as you wish, whether it lead you to victory or destruction, gives the player free reign. However there are always limitations and most of these limitations come to the three resources required for various strategic actions in the game: gold, info and food. 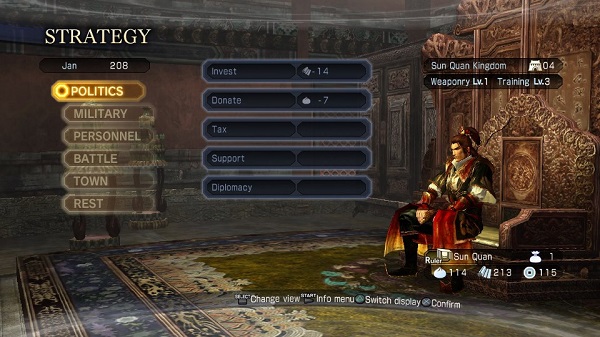 Playing as a solitary warrior requires little of these things, however managing a nation requires access to these resources for most strategies, such as allying with other nations, training your troops or building your forces back up. It is worth noting though, that unless the player is jumping into DW7: Empires on its hardest difficulty, most battles and even the nation management is rather easy to dominate once the player gets past the initial hump in acquiring basic equipment. It is interesting to note that players do have to manage their troop count however, as repeated battles can make it so even a well-supplied army will end up fighting with only two thousand men against an army of ten thousand, making for a battle that usually swings immediately in the opposing force’s favor.

When the player enters combat however, things remain pretty much the same as always with a few adjustments here and there. Since strategems can be used in combat, the player, allied officers and enemy officers can activate various strategies to affect combat, such as laying ambushes, gaining temporary stat boosts or even summoning elite units to the field of battle, meaning that players often have to keep an eye on the field of battle to monitor how the tide is shifting depending on these maneuvers. 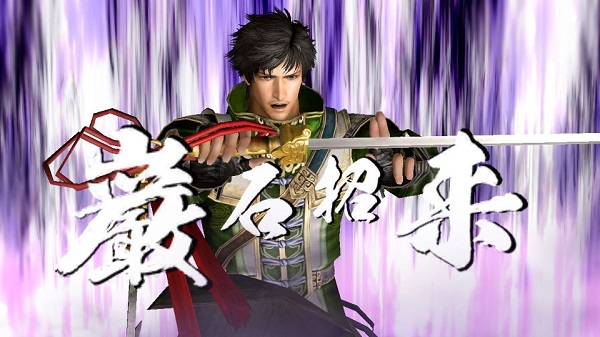 Also changed is the fact that the player must plan their base capturing in a way that allows the “supply line” as it is called, to connect each allied base to the main camp. Otherwise players may find themselves invading the enemy’s main camp only to find that the enemy has severed their supply line and made it so the enemy general won’t appear until the tides shift in your favor once more.

Outside of that however, much of the game still results in mashing square to slay enemies and thanks to some poor balancing of weaponry, it is usually up to the player to purposely limit their abilities by selecting a weapon with a  poor combo-tree to make combat difficult. This is due to the fact that the Musou Gauge fills rather rapidly and while enemy officers can unleash powerful attacks as well, players often have the upper hand even on higher difficulties. 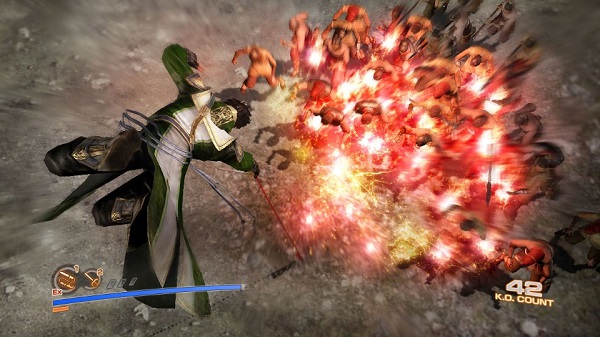 It is worth noting that the game does offer a limited multiplayer option where two players can enter battle either in couch co-op or even invite online players to join the fight. Also available is the option to have other players’ created characters join your world as well as free officers which is a neat addition, though those looking for authentic experiences can choose to disallow such appearances if they wish.

Overall:
Dynasty Warriors 7: Empires offers a focused experience that allows players to be the ruler of their own destiny. Because of this, the possibilities are seemingly endless despite the limited framework the scenarios provide. The newly introduced strategems add just enough spice to the hum-drum battles to keep things fresh but it is worth noting that visually the title has improved little and experiences numerous pop-in issues with troops.

Also, with only one new character added and a couple of weapon types, there is little expansion to the Dynasty Warriors franchise in DW7: Empires. However there is much more to this game than simply slaughtering faceless soldiers by the thousands and because of that, fans of the series shouldn’t hesitate and newcomers may find Empires a decent enough starting point to create a story of their own.