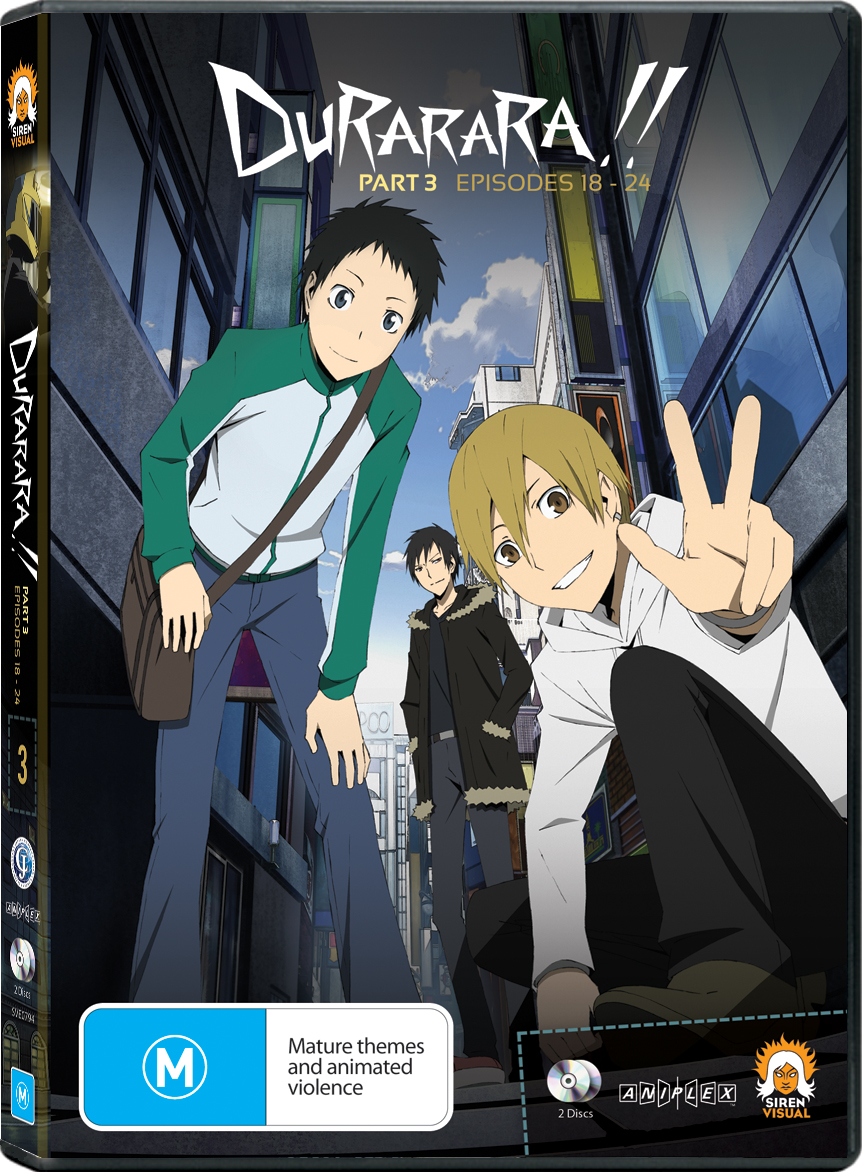 Overview:
With a series with as many ups and downs as Durarara!! you begin to embrace the insanity of the series, without a second thought. For an anime that begun simply telling the tale of the Ikebukuro night-life, for it to come to where it has is quite a feat. Whether it’s conclusion is satisfying is another thing altogether. With the final confrontation imminent, does Durarara!! come out winning or does it fall short of the grandeur it boasted early on?

Story:
All in all, Durarara!! is about one thing, a place called Ikebukuro. Durarara!! slowly reveals more and more of the city in a way that has not been seen before, definitely not in this way. It is so vividly conveyed, that the city itself takes on it’s own personality. The story follows the inter-locking events that tie the characters to the city and eachother and details each of them dissolve into the harsh darkness of the Ikebukuro night.

The world of Durarara!! is harsh, sometimes brutal and most of all insane. With supernatural creatures such as a Dullahan roaming the streets you’d be hard pressed to find a series which aims for realism, yet features as much wild fantasy as this. 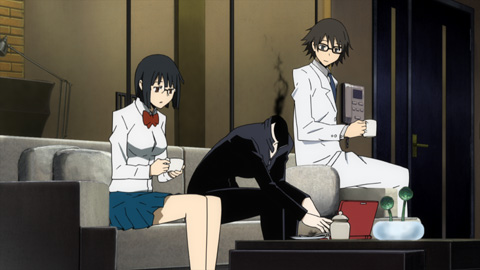 As you’d imagine, with this being the final part of the Durarara!! story, things begin to spiral to an end, to somewhat satisfying results. Albeit the thirst for a sequel simply cries out in the Ikebukuro night to be quenched, it seems unlikely as of now. However the way the series concludes there is definitely room for a continuation.

The story flowed quite well and every character got their own moment of glory, however some of the plot-twists may have been laid on a little too thin, but it wasn’t enough to derail the story in any significant way.

I won’t go into a great deal of detail upon the ins and outs of the story line as by this point the series is well and truly into the tail-end of things and to do so would be difficult to do without spoiling the fun for those new to the series. What I can say though is that everything the series has been building up to over the past 17 episodes comes to a conclusion in the collection and ties up many of the loose ends before the final minutes roll. Sadly it’s not entirely satisfying in it’s execution which lacks the power and gravity that I had come to expect from the series. I did however appreciate it for what it was and enjoyed it none-the-less. 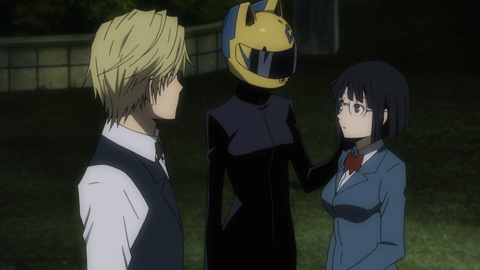 It’s alright, you’ll find someone soon. I’ve got no head and I pick up.

Characters:
Each character hit the right notes in this final collection, with the obvious stand-outs being Mikado, Kida and Anri. Each of them bore a large ammount of gravity of the story and were voiced brilliantly in both Japanese and English dubs.

That is not all though, each of the cast had their moment to shine and didn’t let the final credits roll without leaving their mark on the series. There wasn’t a disappointing performance of the bunch and all of the main and secondary cast where brought to life with ease.

Although not officially a character per say I think it is interesting to discuss, the city of Ikebukuro. Perhaps the unsung main character of the series. Ikebukuro as I mentioned previously, is conveyed as much more than a city, it is an entity unto itself. Rarely is it seen that a location has been so full of life and character than Ikebukuro. From the dark alley’s to the brightly lit shopping districts, to the gang’s who consider it their stomping ground, Ikebukuro is what ties all of these characters together and that is what makes it without a doubt one of the best characters in Durarara!! whether Ikebukuro is acknowledged as a character or not. 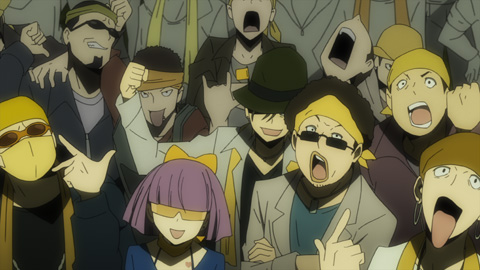 And they were all yellow.

Artwork:
The artwork and animation for this series is a sight to behold, with such vivid and beautiful colours and art direction, Durarara!! has an appearance that resonates with the viewer long after they have finished watching. The style in itself is so dark and gloomy, yet it is so lifely and illuminated. That juxtaposition tells us simply everything we need to know about Durarara!! It is a series about the faint glimmer of life within a dark place and that lifes attempt to illuminate the dark.

Not only that but the character designs are excellent, with each character being very distinctive and some even moving into the domain of the iconic (Celty). Also the animation is fluid and makes full use of the animaters budget with great action scenes and even the simplest of character gestures has had a great deal of effort put into the animation. All in all it is a brilliant job from the art and animation department.

Audio:
As was the case with the 2 previous volumes, the soundtrack is absolutely awe inspiring. From the jazzy little tunes popping along as the characters interact to the fast paced romp during the action sequences, the soundtrack is simply brilliant. The opening and ending themes are also well suited to the series and convey the perfect mood for what is conspiring in the series as well as being generally good songs.

The voice work on both audio tracks was equally as good, with the English dub actors being  particularly good in their respective roles. I’m not sure which I prefer more but for this review, I gave both a try and tended to enjoy the English voice actors a little bit better, particularly Simon’s who does a good job with his accent which I think didn’t come across nearly as well in the original Japanese track. It was a good job all in all for both tracks though.

Special Features:
As usual with Siren Visual we are privy to a fairy nice slip-case and the usual trailers for their other releases. Besides that there is nothing else in the way of extras besides a bonus episode which essentially isn’t really a special feature but still worth mentioning. However there isn’t much else there, which is always a disappointing part of SirenVisual releases. However the slip-case is nice enough that I’m not greatly bothered by the lack on any other features, though I know many will be. 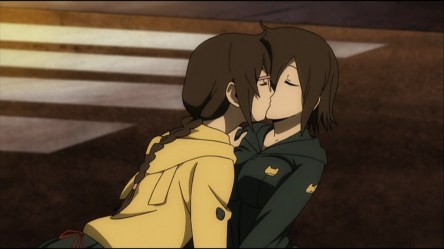 This wasn’t too bad of special feature though…

Conclusion:
In closing, Durarara!! Part 3 is a brilliant finale to an overall brilliant series. With all the pieces falling into place and the story concluding there is little else left to be desired from this series aside from a sequel. I personally recommend this series to fans of Baccano (which is from the same creators), as well as fans of the genre in general.