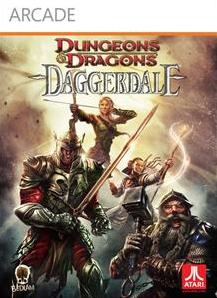 Until a few months ago, I wasn’t very familiar with the Dungeons & Dragons series. After getting a brief tutorial of sorts by one of the writers on this site (Linkage, to be specific), I quickly learned how massive and imaginative the series really was and felt like a complete fool for all the wasted years without D&D. That alone is what sparked my interest in Daggerdale, Atari’s latest video game adaptation of the series. Sadly, this title isn’t exactly the experience I had in mind as while it does show promise, many bugs and glitches reared their ugly, goblin-like faces a bit too frequent to actually enjoy the game to it’s fullest potential. So what is right and wrong with everything exactly? Here is my review for Dungeons & Dragons: Daggerdale. 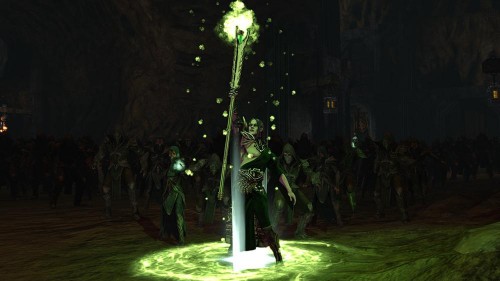 Story
I really wish I could write about an epic quest in which I took part in with this D&D entry, but honestly the plot is a very light one that is easily forgettable. When the evil cleric Rezlus seeks to destroy Daggerdale, a mysterious figure by the name of Lorin-Aria recruits four heroes to save the land from destruction. Players the pick one of four of the heroes which include a human fighter, an elven Rogue, a dwarven cleric and halfling wizard. Shortly after, the main quest takes off with many separate tasks to complete on your journey. These missions are rather short but the pacing of the story in my opinion was done rather well, with cutscenes popping in from time to time to fill the player in as the plot slowly expands.

While Daggerdale’s narrative is passable, the biggest problem I had in this area was with the characters that inhabit the game. You run into a ton of NPCs in Daggerdale, many of which you are not able to even get a line of dialogue out of as there is simply not an option. When you do finally find an NPC to talk to, the conversation is very limited and rather lifeless as it usually pertains to a quest at hand. I understand that the imagination of the player is one of the biggest elements while playing D&D, but every environment I encountered just felt completely dead on arrival as I felt no depth or meaning behind the characters set in this magical little world.

Gameplay
There is a lot to talk about when it comes to the actual gameplay inside Dungeons & Dragons: Daggerdale as it is a bit of a mixed bag. The best element in the game though is the actual combat system used. Combat is purely made up of the age-old hack and slash formula, which does it’s job fine as everything is executed smoothly throughout. Each class in the game have six different special moves as well as standard attacks that can be obtained by leveling up your character and then strengthened over time. I chose the halfling wizard in my game and I very quickly got a handle on the whole set-up as the controls are all mapped out well to the Xbox 360 controller which makes performing actions an afterthought. After a while though, this combat can begin to get a bit repetitive as battles are usually won by quickly downing potions while tapping the same attack button. Even with the small variety at hand, it quickly became evident of what attacks I would have to spam to effectively destroy enemies in a set area, watering down the strategy of the game greatly. 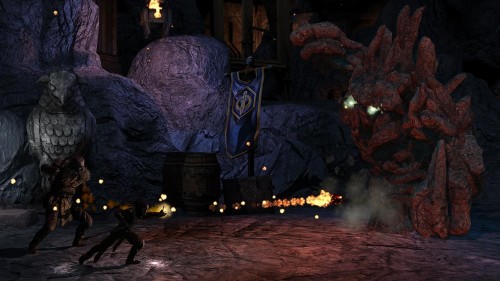 Instead of a MP gauge as we usually see within this genre, a cool-down time is given which usually lasts a few seconds at best for all special abilities. Since my character specialized in magic, the only problem this presented was brief moments where I literally had to run around in circles to wait for my next effective attack to charge. As I gained more abilities later on, this issue became less frequent for the obvious reasons, but the cool-down method just didn’t flow well with the overall scheme of combat.

Customization is yet another limited area in the game as aside from upgrading a few spells, mapping attacks, and equipping your standard weaponry and armor, there is simply not enough options given to make your character feel like your own. Not even gender or race can be chosen, leaving the player to deal with the four pre-set characters for their journey that all cap at level 10. Personally, I felt like this was highway robbery in a sense due to how expansive the series truly is as the watered down approach taken can leave you feeling very unfulfilled.

Quests are a bit simple for the most part, with fetch and slaughter quests being the dominate of what players will encounter in Daggerdale. Go to this area, defeat this foe, grab this item, you get the idea. Having the same types of quests being assigned by such lifeless characters got old pretty fast and had me waiting for the game to simply reach a conclusion.

Aside from those complaints, with a somewhat solid gameplay engine in place, you would think that Daggerdale would stay at least afloat on that alone. Unfortunately, there are bugs around nearly every corner that spoil the enjoyment of it all. For instance, in my very first quest I ran into many goblins that blocked a path. I paused my game for a second to check a menu, unpaused, and every single goblin was frozen. I could still attack the goblins and even kill them, but this glitch went on for every enemy in the game until I finally restarted the quest. Glitches such as that are actually quite common unfortunately, with other graphical bugs such as enemies and even my own character walking through environmental objects sadly becoming a more frequent sight as the game progressed. 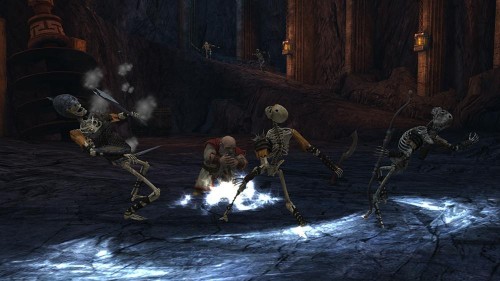 Co-op was one of the most interesting features advertised for Daggerdale as up to four players can join up and tackle quests together. I attempted to try this out for myself, but after just a few minutes in a loading screen appeared out of nowhere during combat.When the game came back, my character laid slain. When co-op actually works however it does enhance the entire experience, but the online lag combined with the frequent kicks and errors made my time with the mode one less favorable.

Graphics/Audio
Much like the gameplay, the visuals of Daggerdale are somewhat mixed as well. Textures used for each environment are quite bland and lack of detail makes it hard to immerse yourself in this fictional world. I did however like the character models used as the faces for each look expressive, but models are often re-used and lack any true variety leaves a lot to be desired. Environments have a bad habit of eating your character as well as I walked into walls and objects more times than I can remember and had many occurrences of NPCs glitching out in the same manner. 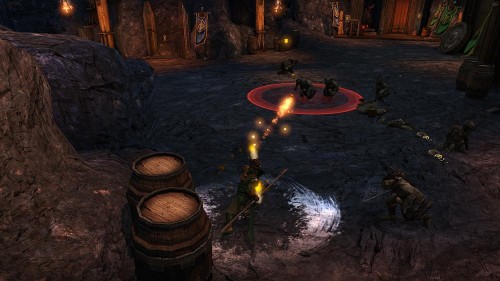 The soundtrack of Daggerdale isn’t the most memorable, but it does fit well into the whole dungeon-crawling theme that the game presents. Cutscenes are fully voiced and while I felt while the voice acting wasn’t the finest work out there, it got the job done to convey the plot in a decent manner. Interestingly enough, I enjoyed the sound effects over almost everything else presentation-wise in the game as they sounded eerily realistic and added a lot more depth to the combat system. When you whack an enemy with a staff, it sounds as if you can literally hear the wood crack against a hard piece of armor. Yeah, it’s just a small touch, but it certainly helped make the combat more enjoyable.

Overall
Dungeons & Dragons: Daggerdale has some great ideas behind it as it comes from a franchise that paved the way for many RPGs we see today. Sadly though, it is weighed down with many bugs and the lack of customization makes the whole game a dull, unrewarding experience overall. Controls are mapped perfectly to the 360 controller though and combat works well enough to actually play the game, so some of the hardcore D&D fans may be able to look past some Daggerdale’s shortcomings. Otherwise though those looking for an action-rpg to sink their teeth into are better off looking elsewhere until a patch is released.

I Give Dungeons & Dragons: Daggerdale: