Dungeon Hunter has been a huge success for Gameloft, and it’s not hard to see why. After bringing that classic addictive dungeon crawling action to iOS devices, PlayStation Portable and more, Dungeon Hunter Alliance now comes to the Mac app store with full brutal force, complete with a very smooth and strong online multiplayer community and endless treasures to loot. While Dungeon Hunter Alliance is far from perfect, it sure is a lot of damn fun with plenty to do. An easy recommendation to all Mac gamers, especially if you like dungeon crawling. 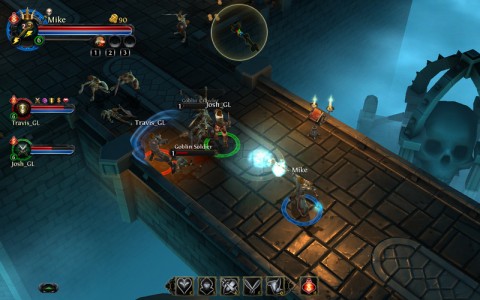 Have you ever woken up dead before? Well your about to! Dungeon Hunter Alliance grabs your attention straight away with a unique and interesting plot point-your character is a dead king, brought back from beyond the grave to undo his past wrongs and stop his evil ex-wife from doing evil Queen stuff. Unfortunately after this the storyline is all downhill from here, as everything is basically forgettable and you only ever meet one other person that isn’t an enemy that matters. Oh yeah and that character is so poorly developed that you really couldn’t care for her existence at all. With a story you’ll want to skip through, boring cut scenes and practically no character development, you’d think this would be a problem. Thankfully however, the story is not important as it’s all about the gameplay. While an engaging storyline could’ve made the game more captivating and enjoyable, this title puts you straight into the action and it works. Why? Cause telling stories is for little girls! Now grow a pair and kill some trolls! 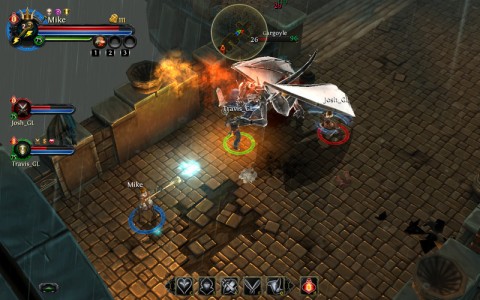 To be blunt, Dungeon Hunter Alliance is really just your standard top-down, hack-and-slash dungeon crawling RPG and isn’t all that ambitious, but it’s made so well you shouldn’t care at all and it’s really easy to have fun with. You’ll begin your quest with a whole bunch of options-choose from one of three classes (Warrior, Rouge or Mage), figure out if you want to play via point-and-click style or begin raiding dungeons with your keyboard and then eventually you’ll need to decide how you’d like to transmute your items. What makes Dungeon Hunter Alliance so easily accessible to the casual market is that transmuting loot for cash and equipping weaponry can be automatically done for you. It’s a huge time saver and a neat inclusion, but the option to not do so is also present for the hardcore gamer who likes to observe the stats of every item he comes across. Hot keys are also nicely implemented but what makes the gameplay so addictive and fun is that the upgrade system encourages the player to constantly want to improve, so you develop a need to push forth in the storyline as the enemies do get harder as you go along. Levelling up can more and more time consuming as you advance, and as a result grinding starts to feel more rewarding. Each time your character gains a level they are also given points that can be assigned to their stats as well as skill points to be assigned to which magical spell they’d like to learn or improve so you can easily see your results in real time. 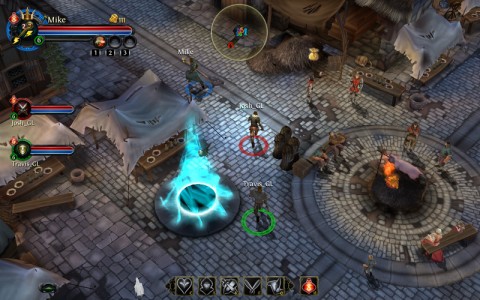 The most fun you’ll have however is sharing the experience in the online multiplayer with up to 3 allies. The game runs smoothly for the most part and it’s really fun to develop teamwork, although admittedly you don’t really have to as every problem can mostly be solved via hack n’ slash. Sometimes a particular section in multiplayer mode may be hard to take on alone, so these situations can easily be worked around by simply hosting a new multiplayer game online and brining in some allies to help you out. There’s almost always somebody online and connecting a game is never hard. The main challenge however is finding someone who’s advanced as far as you in the story, as you can’t connect to quests you haven’t unlocked yet. Strangely no online voice chat has been included which is a shame, as it’s something the game really could’ve benefited from. There is a chat box for typing, but it’s seldom used and occasionally can be buggy so it’s a bit of a let down as well. Regardless, multiplayer still is a blast to play. 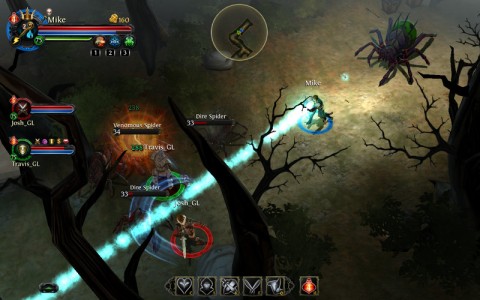 Despite so many highlights, there are numerous flaws within the game. First of all, the AI is terrible. Enemies will try and run through walls rather than around them to get to you, enemies will get stuck they’ll know where you are before your even in sight, etc. While it doesn’t really matter as the gameplay is simply ‘bad guy runs at you so you slash at him and he dies’, it’s slightly sad when your able to base a lot of your tactics on how stupid your opponent is. Also levels can get really repetitive and things can feel like fetch quests, but thankfully the stage variety and upgrade system is enough fun to motivate you through them. Puzzles are introduced to spice up the gameplay, but they are designed so effortlessly that they are more chores rather than puzzles as they are simply just ‘pick this vase up, put it on this pressure pad to open the gate’ while oddly standing on the pressure pad doesn’t work. There are also numerous bugs throughout the game. However despite all of these issues, none of them are game breaking and none of these should ruin your experience with the game itself, and in the end that’s all that really matters!

Graphically speaking Dungeon Hunter Alliance isn’t going to win any awards for best graphics this year. Character models look ok but never outstanding and character design plays it safe although that’s not a terrible thing. Magic looks nice as well with bright colours that catch your eye and backgrounds are interesting and contain a lot of variation. Sound effects are decent but it’s a real shame that the the main characters have no voice acting. Occasionally you may hear one or two lines but it would’ve been nice to hear more and read less for the Mac version of the game. Tunes are pleasant to listen to but nothing is spectacular. 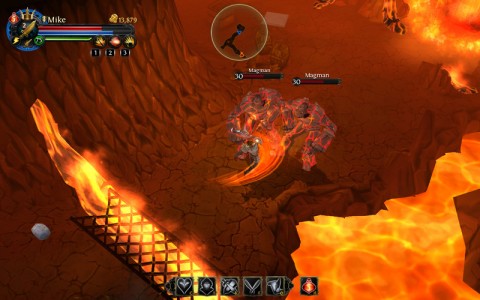 Dungeon Hunter Alliance is blast to play. While it does play it almost a little too safe at times, it’s a strong reminder of how fun dungeon crawling can be. With an upgrade system that motivates you to push onwards, an entertaining multiplayer and addictive gameplay for only $15.99, Dungeon Hunter Alliance is hours and hours of grinding fun and a great value for money. If you own a Mac and enjoy a good dungeon crawl, this is hands down a must buy game.