Of all the games I played through 2011, Dungeon Hunter 3 without a doubt is the game that surprised me most for a variety of reasons. In my eyes, Gameloft have always been a company content with playing it safe, sticking to similar formulas of popular console titles and emulating a similar experience on mobile devices with their own titles. While this would be considered a ‘cheap move’ by some standards, nobody’s ever really upset because usually their games are pretty damn good. So why is Dungeon Hunter 3 so surprising you ask? Because Gameloft have taken countless risks with one of their biggest series, Dungeon Hunter with this game, and for that I think they should be commended. But the only question that matters still remains: is the game any good? The answer for this title is definitely going to vary from person to person, so the main thing this reviewer can suggest is to pick up Dungeon Hunter 3 with a very open mind. 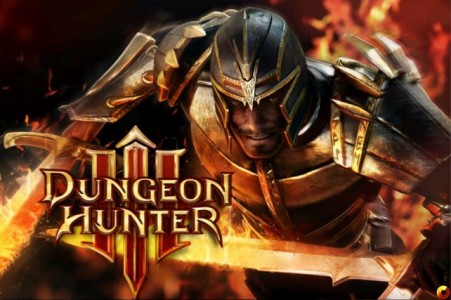 Unlike the previous Dungeon Hunter titles that brought a very Diablo-styled dungeon crawling experience to the iPhone, Dungeon Hunter 3 cuts out all aspects of dungeon crawling and RPG-styled adventuring and turns it into an arena-based brawler with social elements reminiscent of Facebook games such as Farmville. It’s a very unique combination which I’ve certainly never seen before and a risky move on Gameloft’s part as they are removing many of the series’ best aspects which is sure to disappoint fans. Players can still collect gold and XP to advance, but the difference this time around instead of constantly doing so to improve your character, these are just to unlock barriers to upgrading. This is where the freemium banner comes into play as the game is constantly reminding the player they can advance more quickly by paying with money from real-life. While downloading and playing Dungeon Hunter 3 is completely free, advancing through the game and upgrading can be a long and tedious task unless you want to throw in a bit of extra cash. So while the concept is unique and interesting on paper, unfortunately these ideas don’t come together very well once the game is in your hands. 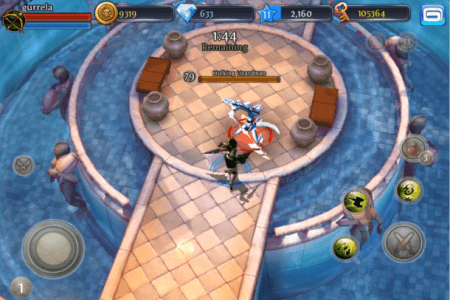 This isn’t all bad however as the game’s core engine is pretty solid and the combat aspect which the entire game is focused on is basically the same as previous Dungeon Hunter titles. So those familiar with the series will feel right at home and know what to expect: fun, simple and addictive fighting, with awesome additions such as skills and fairies (that can cause some serious havoc) to spice up the game as well. What is unfortunate with Dungeon Hunter 3 most of all however is that this combat system is very shallow. See what made this work with previous Dungeon Hunter titles is that dungeon crawling, adventuring and the idea that your character is constantly moving forward made it so this simplistic gameplay wasn’t so obvious, but in Dungeon Hunter 3 you are constantly fighting wave-by-wave in a small arena and sadly that is all this game has to offer. 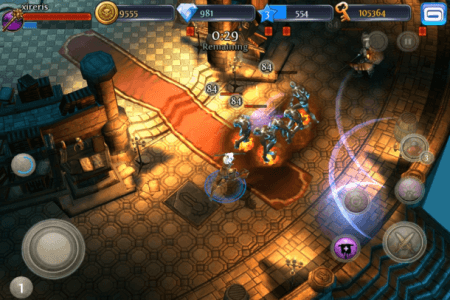 To further salt the wound, the upgrade system only further hurts the gameplay and discourages the player from wanting to advance. For example, upgrading armour can take 30 minuets in real-time for the blacksmith to produce rather than it being able to equip instantly. So players are forced to either wait for that item they need to help them get through the next level or ‘speed up’ the process for a price, which is basically the game encouraging you to dip into your real-life pocket. So sadly, it feels as if you are punished for playing the game and discouraged to advance. While this works well for some browser-based games that involve planning, in an action-based game like this you really just want to upgrade quickly and get back to the fun. Furthermore a key system limits your chances to advance and collect rewards and if you die revival is a hefty price. So really by the end of the day it kind of feels like Dungeon Hunter 3 has put a price playing it to make you want to stop playing all together. 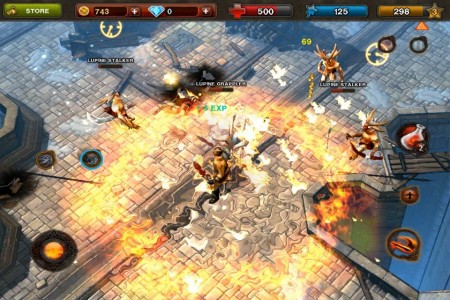 On the plus side however, Dungeon Hunter 3 has some serious eye candy and is by far the nicest looking Dungeon Hunter to date. The game looks gorgeous with interesting textures and smooth animation and some of your enemies such as the boss characters look very menacing in design. Oh yes, and there’s lots of beautiful, gory blood! To sweeten the deal it sounds great with a solid and engaging soundtrack. Each hit you connect with your opponent sounds really brutal and gives a sense of satisfaction, making the endless waves of slaughter all the more fun. Without a doubt, the graphics and soundtrack are the #1 highlight of this game. 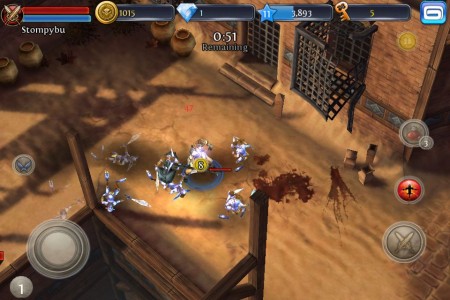 Dungeon Hunter 3 is a swing-and-a-miss, but it’s not all bad. If your one of those losers who don’t read reviews and just check out the score (and believe me I know your out there!) your more than likely going to get the wrong idea about this game. Sure many of these elements of gameplay clash and don’t mix well together but the game does have some heart to it. As the game is completely free to download, I recommend you even try it out for yourself, but Dungeon Hunter fans don’t get your hopes up. I reviewed Dungeon Hunter Alliance earlier this year and couldn’t put it down, so to say the least I was very disappointed and surprised with this title. Perhaps it would’ve worked better as a spin off rather than an actual sequel. But Im not mad at Gameloft, in fact Im proud of them for taking a risk and stepping out of their comfort zone with this game. That being said however, I do hope the developers decide to revert back to the original style of gameplay fans originally fell in love with for their next instalment in the exciting Dungeon Hunter series.