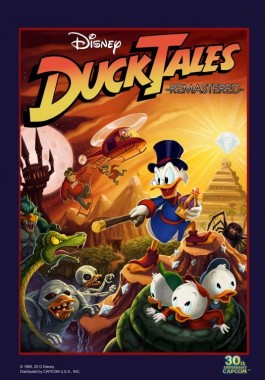 While gamers are all united by the controller, one era separates millions. There are those who play new releases and enjoy every minute of innovation that is found within each title, and those who sigh as they push a disc in the tray due to cartridges now just being a thing of the past. In a way, a hefty responsibility has been thrown on to Capcom’s shoulders to nurture this lot of fans that are now in their mid-twenties and beyond – as they are one of the last standing publishers (aside from Sega and Nintendo) from a generation that taught us how challenging a game should be, and that a tutorial was nothing more than the first stage.

WayForward have taught us through their own releases however that newer developers can pull off old tricks while retaining a feeling of freshness – and with the company’s rise as of recent due to a growing library of high quality platformers, there has been no better time to bring back one of the most beloved franchises. Capcom and WayForward have done the unthinkable and brought back DuckTales in all of its glory, with love put into every pixel and all of the moon theme that a retro gamer could handle. Is it enough though? Did the stars align for no reason with this “Remastered” remake, or should we still be pulling out our old consoles to get that regular McDuck fix? Let’s find out.

Even though I loved the original DuckTales, I didn’t quite remember it much when going into remastered in terms of a story. Sure, there was plenty of treasure and loot to collect, but aside from those aspects and saving some nephews, the rest had kind of blurred out. This remake retells the tale, but with a much greater emphasis on narrative due to dialogue sequences that have literally been inserted into each stage. Scrooge McDuck is on a quest to collect five treasures from all over the world, but past enemies such as Magica De Spell and Flintheart Glomgold are acting as a roadblock, constantly showing up to cause trouble for the lovable old McDuck and his large family. 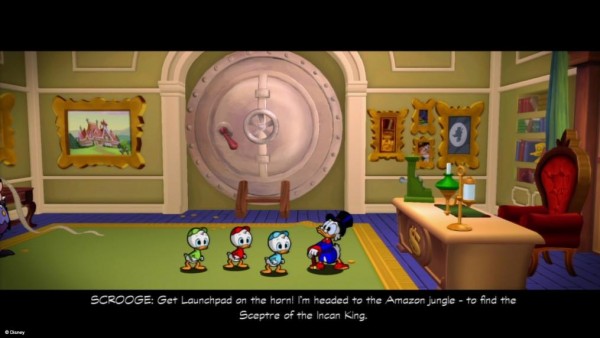 The story in many ways plays out like five episodes of the television show, with one for each major stage. Sure, its a bit cheesey and non-nonsensical, but if you are like myself and still go back and watch the show from time to time, you should know what to expect as the little one-liners, plot points, and other fare do well to capture the essence of the original cartoon while still feeling relevant by today’s standards. This title is meant to be a blast to the past, and once those theme tunes start cranking up and Alan Young starts squawking those famous lines, you will be instantly placed in your childhood on a Saturday morning. Honestly, that is all one could ask for, and DuckTales delivers nostalgia and then some on that front.

Like most NES classics, DuckTales did not have a lot of gameplay mechanics – as the gameplay ran off a very simple formula where the stage carried the player through a properly set pattern of enemies and objectives. If you remembered where the enemies were, they didn’t cause an issue as each foe spawned at the same place, and suffering through some trial and error was part of the fun of overcoming the intense challenge. In Remastered, WayForward have stuck to that mindset when revising these worlds completely, as Scrooge still only has his cane that acts as a pogo stick, which can also smack obstacles into enemies while up close. Aside from jumping, that is all Scrooge does to battle his way through the chaos – but it works and proves to be effective, proving simplicity and preservation goes miles when recreating something as special as this little gem. 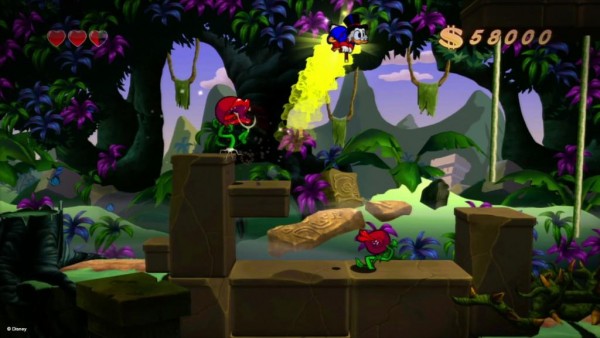 To further explain how these mechanics come together once progressing through a stage, it goes a little something like this. When the player sees a group of small platforms that are spaced apart, they must bounce into the air using the cane and try to tap each piece of land to get across. At times, enemies will come into the equation as well, and the player must then use their bodies to make it across a pit of spikes or other hazard found on the floor. In not so dangerous areas, the pits are replaced with hazards such as plants that cannot be bounced on or chains that you must latch onto to make it to a higher platform. For these types of places, all that is needed is precise platforming, and while I made a few missteps during my own journey, each death doesn’t feel cheap as the game is all about memorization and proper precision. 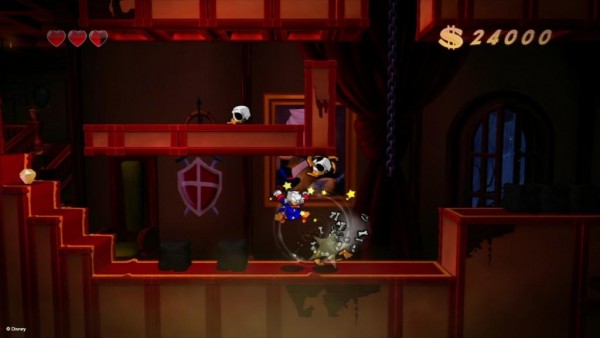 If I had any gripes about the gameplay, it would be that when WayForward said that they were going to stay true to the original, they meant it in every sense. There are a lot of platforming aspects that have evolved since DuckTales released on the NES over twenty years ago, such as hitting “up” to snag onto a chain while in mid-air. Yes, you can get this down with proper practice, but those used to the hand-holding and non-manual platforming will be properly be questioning their retro love after a good number of pit deaths and blows to one’s pride. Funny enough, I am one of the only retro fanatics I know that finds memorization in the genre to be a bad thing. I never was a fan of Mega Man, as I preferred to explore an in-game world without a formula in place. That said, DuckTales: Remastered strikes a perfect balance of exploration and formula, preserving a rock solid challenge while allowing the player to take in every aspect of the beautifully crafted stages along the way. For every hair-pulling moment, there is a reward right behind it, and that means if you can stick it through – that golden, NES feeling of accomplishment will be there to greet you at every checkpoint. 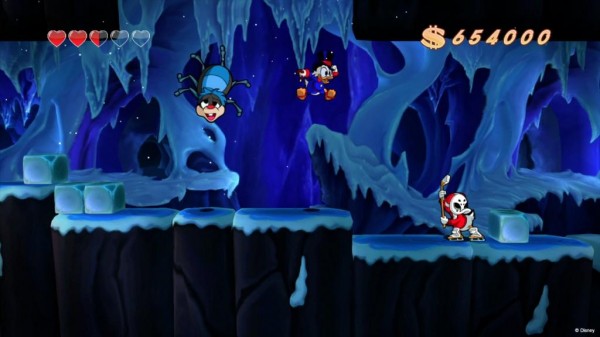 As for what has changed, boss battles are now far more involving and require the player to learn the pattern of a large foe in order to conquer it. This makes for a satisfying finish the first time around, and playing on a tougher difficulty later will tweak the rules to keep you coming back for more. The stages have also been expanded upon, with more objectives and much bigger spaces to roam. Every stage feels completely different to the next due to the differences of foes and obstacles, and that trait of the original keeps this remake in full form throughout, killing a lot of repetition that would normally be found in similar titles from the era of 8-bit. If by chance you find yourself throwing the controller at the tough challenge DuckTales offers, an “Easy” mode is also available outside of “Medium” as well as a Hard, and even Extreme level of difficulty. These difficulties don’t do a lot to effect the challenge, but instead give the player an option of not having a stock of lives or having each hit of damage only do do half a heart’s worth, rather than taking a whole heart in one hit. 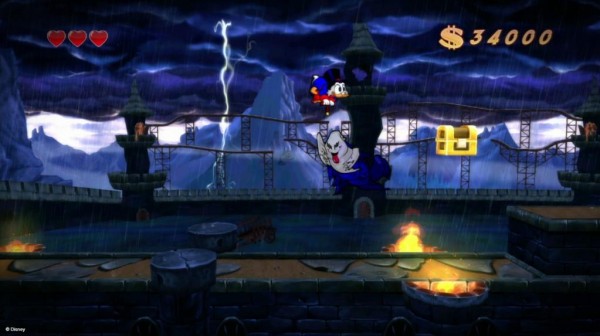 As I mentioned, the story sequences have been placed in the actual game itself, and while you can skip cutscenes, there is no option to turn them off completely. This is something that will turn away speedrunners, and after dying ten times on one section – one can only take so much of the hijinx of Launchpad, no matter how endearing it is. While you do some exploration in each stage, gems can be collected to increase the worth of McDuck, and that currency can be used later to unlock a great number of concept artwork, music, and other goodies. Due to the high cost of these unlockables, this means you will probably be headed back to the Moon, Transylvania, and other famed locations time and time again, collecting cash and furthering the experience by testing the waters with tougher difficulties. There is even a money vault that players can swim around in for no reason at all, and like the hug button in WayForward’s other NES remake of “A Boy and His Blob”, it just goes to show that minor additions can make a huge difference when it comes to showing love to an audience.

Instead of going for the dated 8-bit design, everything has truly been “Remastered” for this brand new DuckTales, with bright, vivid color and stunning 2D art making each world come alive all over again. McDuck and family look fantastic and animate to perfection aside from their mouths staying closed during dialogue sequences (which really isn’t a problem), as well as enemies wobbling about through each stage in their perfect little patterns. Sure, there is a little bit of stiffness at times during cutscenes and the 3D items look out of place in the 2D animated world, but as someone who has played the original a countless number of times, that is a small hiccup in what is otherwise a beautiful recreation. 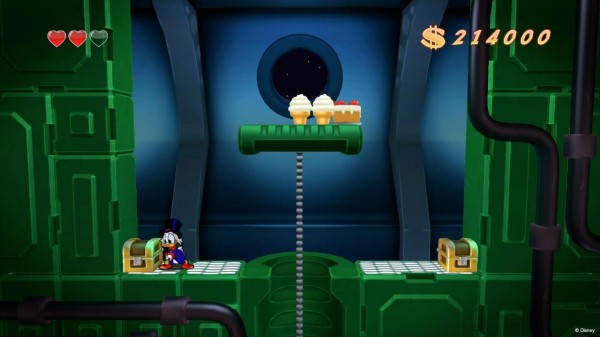 As for audio – where do I begin. There has been newly added voicework that features the original cast reprising their roles in order to sprinkle in the magic from the television series, and yes – it does its job very well when it comes to slapping a smile on your face. Alan Young (the voice of Scrooge) sounds a bit tired due to his age, but still delivers a memorable amount of dialogue as what may be one of the most beloved cartoon characters of all time. The music is honestly the part of the game that holds the most merit. Its a very rare thing for a game’s soul to be tied to a soundtrack, but that has always been the case for DuckTales. Thankfully, every redone melody is even more power behind it, and as you would expect, the Moon theme is yet again the winner of the collection, but with a lot of competition due to new spins on old tracks such as the very upbeat Himalayas tune and the majestic beats from the Amazon. Its hard to describe what makes the soundtrack of DuckTales special, but you should know that these remastered tracks are dripping with nostalgia and as sweeter to the ears than Mrs. Beakley’s cake.

By today’s standards, DuckTales: Remastered is a bit dated and is much more challenging that it appears, but as a remake of an NES favorite that we thought we would never hear from again, it stands the way it did over twenty years ago – showing an entire industry how its done. Nearly the entire experience has been preserved, with a fine coat of polish and freshness bringing the final product to a shine. Many people would use that term “nostalgia goggles” with a remake like this, but nostalgia is just a term used to describe something that brings back good memories and should not be feared or looked down upon. DuckTales: Remastered is that and then some as it has been revived at a time where video games are going for more serious tones, to which it counters that with hours of happiness, innocence, and some of the purest gameplay you can find on consoles. Go ahead, take a dive into Uncle Scrooge’s money vault, your childhood is waiting.