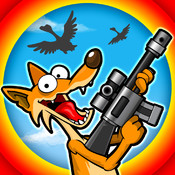 Duck Destroyer is a free, casual, shooting gallery-esque iOS title developed by Kojo Games, and published by Chillingo. Now, Red Fox is hungry, you see, but he is also a trigger-happy maniac who likes his duck blackened and crispy. Instead of hunting in the wild like a normal animal in the great food chain of nature, he prefers to grab a stick of dynamite, a pump-action shotgun and a make-shift, coin-collecting robot (will explain later) and he’s all set… to infuriate PETA, the RSPCA and any other wildlife protection organisation there is (maybe that’s on the developers, actually). 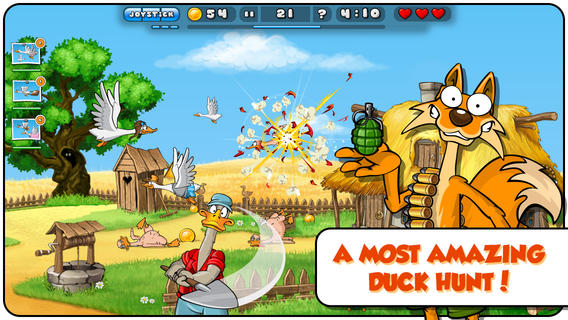 The player sits with a 2.5D perspective in Duck Destroyer, and a substantial degree of control over the camera, which can be moved left to right and up and down. Combined with the parallax scrolling effect, there is a great deal of perceived depth on-screen. The player can opt for virtual joystick or gyroscope control schemes, which can be switched between at the tap of a finger mid-stage. Ducks fly past in either direction at varying speeds as the clock winds down, dropping coins or just plain dropping dead as you take aim and fire. Each of the 150 levels included have a set of three conditions that, when met individually, provide you with a star. Doing particularly well and surpassing a specified score will net you extra coinage. Obtaining just one star will unlock the next level. The player also has a total of three hearts, representing their overall health. That’s right, these ducks aren’t all pushovers… some will pop up from behind the foreground or background and throw tomatoes, snowballs, you name it. Every hit takes away one heart, although shooting them first solves that problem. I’ve found that if you hear/spot the culprit, and they’ve yet to attack, looking away and keeping them off-camera seems to avoid any potential damage. 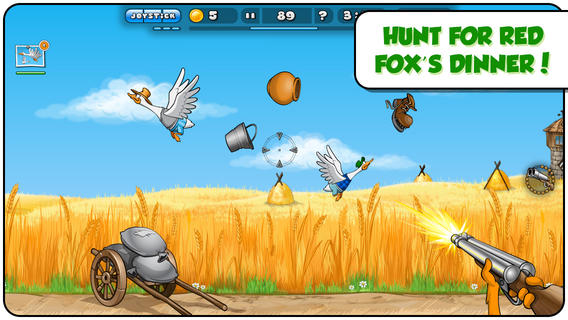 Bunches of balloons carrying crates full of useful items can also be shot down. Inside may be a Pill (health refill), Clock (additional time) or Snail (slowdown) amongst other things. These boosts can also be bought with coins in-menu, or earned via completing Granny Quests, which are basically achievements. I.e., “Gold Rush – Gather 1000 Coins” with a reward of 100 coins itself. There are three tiers to each quest, with increasingly demanding tasks and better rewards on offer. Boosts and objects, such as dynamite, can be equipped at the start of every level and subsequently utilised by tapping the desired item at the bottom of the screen. Four objects can be equipped at one time, not including your main weapon and trusty robot – from automatically collecting coins for you, to helping gun down those pesky ducks, robots can assist on multiple fronts, although the offense-centric ones are expensive to unlock. As you progress, different “enemy” types are introduced, able to withstand a higher number of bullets or fly at a faster rate, for example. They necessitate an upgrade of your own arsenal, which can be managed by replaying levels for more coins, or succumbing to the ease of micro-transactions. Yes, you can pay for pretty much anything in this game… even to reduce a cooldown-like effect on your gun. 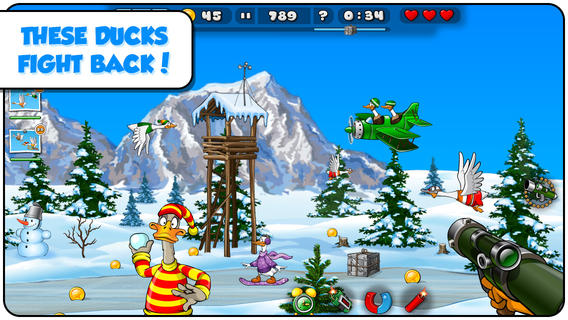 Duck Destroyer is an extremely colourful and vivid game that ventures into environments you wouldn’t expect. Each setting has its own unique visual style, with very few assets being reused. On the Farm, you’ll see Farmer ducks (aptly), Pilot ducks, Fatties (offensive, but okay…), Angry Woodcutter ducks and more, most of which are wearing some sort of flannel design to reflect their surroundings. On the Snowy Mountains, you’ll encounter Yetis, – of both the on-foot and hang-gliding variety – Skiing ducks, Snowboarding ducks, Flying Stripy Sweater-wearing ducks (creative with these names, aren’t they?) and, my personal favourite… Angry Hockey Player ducks! And of course, in Space, there is a futuristic aesthetic, but the highlight has to be the Alien duck – grey and lanky, with bill and all! The further into the game you get, the busier the screen can become, although sensory overload is never an issue. The music in the game is playful and upbeat, which ordinarily wouldn’t mesh with the motif of dead animals, but the cartoonish art aids in creating an appropriately lighter mood. The fully animated cutscenes aren’t entirely necessary, and can be somewhat flat. Then again, this isn’t a Pixar production, and it add a nice touch of flair nonetheless. 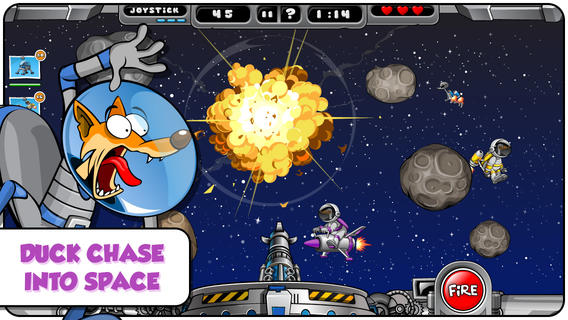 Duck Destroyer is a fun title, but it is guilty of the exact same, overt ploy that every free iOS title with in-app purchases utilises. It features intermittent ads – which is a fair source of revenue – but then shamelessly goes overboard with gameplay elements such as putting timers on resource and weapon cooldown, allowing players to pay to speed up said timer, and having both Stars and Coins used as currency to update/unlock/repair items. The developers do offset this by gifting a small amount of coins with every daily start-up of the game, but with the options to pay to remove ads and “buy all weapons”, the cooldown timer at the very least is a totally unnecessary and superfluous addition that just influences users to spend more. Of course, the game can be played without spending a dime, but it does get difficult to progress when certain level conditions can barely be met without needing to purchase a better weapon… otherwise, you’ll eventually be forced to wait for your gun to repair itself, and those sweet daily coin dumps to supplement your pocket.