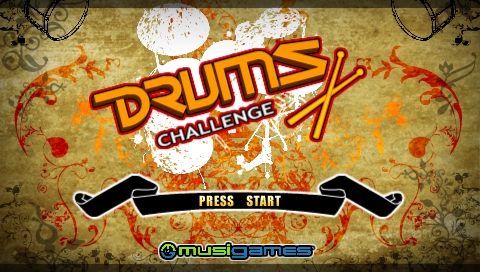 Sanuk Games has published quite a few games for the Mini service on Playstation consoles.  Ranging from tough platformers to mind boggling puzzles, these games are usually at the top of quality when it comes to the titles usually released onto the Playstation Mini store.  The developers have recently released another game for Minis called Drums Challenge.  It aims to capture the feeling of playing a drum set and looking totally awesome while doing it. Does it succeed?  Have my social status and looks improved?  Is the Awesome meter in the city square alight, with my name at the top?  Read on to find out.

Drums Challenge is quite a simple game in theory.  An opponent, usually a made up music star, plays a drum set for 10 to 15 seconds.    Each drum and cymbal corresponds with a button.  For example, the bass drum is hit with the X button.  When the opponent is playing, each drum or cymbal, when hit, lights up, as does the button symbol underneath each instrument.  Once the opponent is finished playing a section, it is then the players (thats you!) task to replicate the actions using your controller inputs.  It may sound easy but, in reality, it is difficult, sometimes to the point of infuriation. 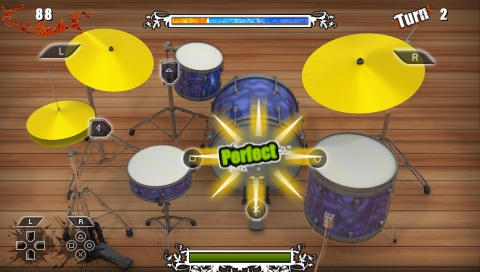 At first,  each section is just one drum.  The opponent will play in time with the guitar and other instruments in the background and all you’ll need to do is press just one button in time with same music. It later increases to two buttons, 3 buttons and then more, often times also requiring you to up switch between multiple drums, just like a real musician or drummer.  Most of the time, the game captures the hectic feel of playing the instrument and it is quite fun.  The soundtracks are upbeat and keep the game feeling fresh.  The characters, although only on screen for brief periods of time, are quite encouraging even when you fail and they are stylishly unique.  When you win, they congratulate you, making you feel like a rock star yourself.  The art direction and graphics are top notch.  The game feels quite modern and it very clean and simple to navigate.  It was a joy to look at and move around in.  However, there are a couple problems with the game. 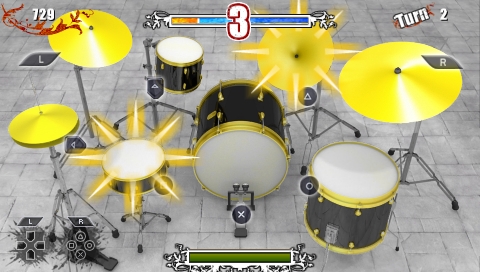 The most glaring issue is when the player must press two buttons at the same time, for example the Square and Triangle.  It is very awkward to do so, and in my experience, it was nearly impossible to pull it off in succession with the music while at the same time worrying about the next note I needed to hit.  Most of the time, I ended up missing both beats, or missing the succeeding beat.  I may be the  only person to experience this issue though, as it seems inconceivable that such a large problem, in my view, could have escaped notice.  I was playing on the PS3 and I did not understand at first why they did not make use of the R2 and L2 buttons.  However, once I tried the game on the PSP, the problem lessoned and the button situation became clear, although I wish there was some sort of solution to the problem.

The other problem with the game comes down to the fundamentals.  All in all, for a portion of the experience, it feels more like your playing a musically inspired Simon Says game than actually playing a drum set.  Memorization of the previously played notes can be a pain and sometimes it is an exhaustive experience, particularly on the higher difficulty levels.  The addition of a system similar to Rock Band, where the notes are previewed before they must be hit, might have made the gameplay much more fun. Admittedly, playing the drums is quite hard and this game replicates that part of playing the instrument adequately.  However, after a long day, relaxing with this game is tough to do as memorization and cumbersome controls are the last thing I want to deal with.  That said, if your looking for a portable experience, this game is quite a treat to play in the car. 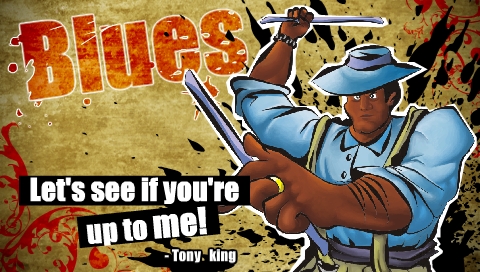 There is a slight problem with the lag in the PS3 version of the game as well.  The developers have acknowledged the problem, saying that although the game is perfectly playable for the console, the way that the game emulates the PSP version can cause problems, especially in freestyle mode.  So far, there is no fix for the issue, although admittedly, the problem is so small, it is barely noticeable.

Most of your time will be spent in Career mode, where you go through the different genres of music trying to beat the 25 characters.  Beating them unlocks the next challenge.  Along the way, you can unlock different pieces for your own personal drum set which can be played in Freestyle mode, which is exactly what it sounds like.  Unfortunately, there is no recording option for freestyle mode, which is a real bummer.  However, you will, as exemplified by me, look pretty rad while composing beats on the fly. 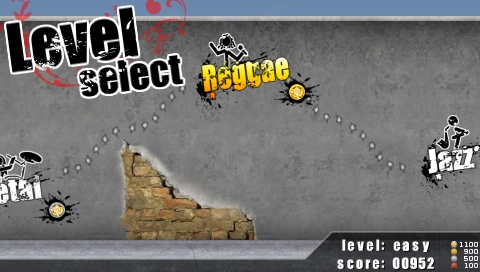 In conclusion, Drums Challenge is neat little title.  There is plenty of music, from all genres, like blues, rock and country.  Each track, although unlicensed, is sufficiently playable on its own. In fact, I would not mind downloading a couple of the tracks into my Zune collection for general listening purposes.    The graphics are superb and the gameplay is pretty fun.  If your looking for musical experience on the cheap, this game may do the trick.  There is plenty of value for your money in this title.